This week: an ancient secret uncovered, accidental archaeology, and a horde of demons.

Lines of power radiate outward from the crystal, revealing an eldritch circle inscribed in the ground.The crystal hangs in the air, patiently, accompanied by a faint ringing sound. Its secrets lay waiting to be discovered.Then the ringing strikes a sour tone, giving way to the sound of flies, buzzing angrily. They come, then, oozing forth from cracks between the planes. Demons.

This adventure hook can be used for players of 5th+ level. See guidelines below for suggested encounters.

The party stumbles into a ruined castle, nearly reclaimed by the wilderness. It is peaceful and secure. Long since scoured clean of anything worthwhile… or so it seems. Hidden inside is a strange artifact–a crystal that hovers above the ground, humming with power. It beckons the adventurers, but only if they can save it from an extraplanar threat that shows up just as the players arrive: a horde of demons hell-bent (sorry) on the crystal’s destruction.

No, this crystal isn’t dark. Why do you keep asking that?

The empire of Nurand fell long ago. Little is left in the world of their passage, save for ancient, moss-eaten ruins and just enough detail on the works of their empire to fuel endless debates among scholars. The players discover one such ruin, Kol-rah Castle, whether by accident or design. They could be wandering through the wilderness, maybe looking for a kobold’s lost “kingdom” or trying to find an ancient tomb when they stumble on the castle instead. They could be looking for shelter for the evening. Or perhaps they simply heard rumors of an ancient ruin and set out in search of treasure.

Whatever the reason, the players discover Kol-rah Castle. It is mostly reclaimed by nature. The area around it is heavily vegetated, the ruins are overgrown with moss and ivy, etc. It iss preternaturally peaceful…the area is of a more moderate clime than normal, making it the perfect place to bunker down.

Inside, the party will find the castle is mostly empty. However, this castle is home to a secret. A hidden chamber buried beneath one of the rooms has been sealed away from the outside world for years. Ages, even. Hidden inside this chamber is a crystal that radiates magical power. This crystal is the prison of a powerful djinn, who wishes to be freed. However, before the players can do anything, a horde of demons appears to try and corrupt the crystal with their fell essence. The players must drive them off long enough for the crystal to seal the breach between the planes.

Read below for more details, or scroll down to the end for the encounter suggestions!

Kol-rah Castle is a part of the ancient empire of Nurand. At the heyday of the empire, Kol-rah was the castle to a massive city that worked arcane wonders. One such feat was the imprisonment of a powerful djinn. Whatever end befell Nurand, Kol-rah Castle has been long abandoned, overtaken by nature. It is all that remains of the mighty city that once lay in this area. When the players discover it (see above) they will notice that the area feels peaceful and secure. Anyone who can pass a DC 13/17 (5e/3e) Arcana or (knowledge) Nature check will notice that the glade the castle is in is subtly warded. Though the magic has grown faint over the years, there are still wards in effect here, meant to keep wildlife at bay and to prevent scrying of any kind.

Characters who can pass a DC 17/21 history check might know some fact about Nurand. Perhaps they know that the empire was reputed to have powerful mages, or that they bound extraplanar creatures and elementals to their service, using them to achieve the lofty heights of their empire. Either way, they’ll also know that the empire fell, and its people disappeared. 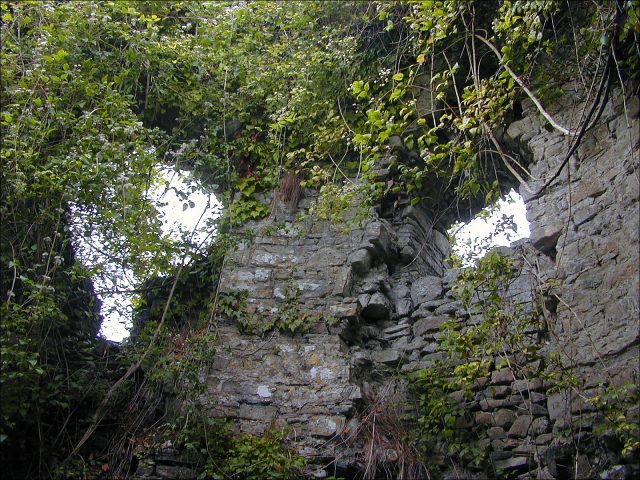 Players attempting to search the castle for traps or treasure will notice the hidden chamber on a DC 15/20 check of the appropriate skill. Parties that fail to find it on an initial pass will discover it quite by accident as the entire floor above it (most likely the throne room) has weakened over the centuries, and collapses once the characters stand upon it, functioning as a pit trap (5e/3e) once three or more characters are standing on it.

The Chamber of the Crystal

Inside the chamber is a large crystal that hangs motionless in the air. Aside from the dust and rubble from the ceiling above, there’s no sign that anyone else has been here in a long while. As the PC’s approach the crystal, it comes to life, glowing with light and humming with arcane power. All around the crystal is a 30-foot radius magic circle, etched in hidden lines that are revealed when the crystal comes to life.

The crystal serves as a prison for Volmar, a powerful djinn who was bound there during the days of Nurand, and who sees the character’s presence as an opportunity to gain freedom. Volmar can communicate telepathically with anyone in the room. And can cast spells upon anyone within the 30-foot radius of the crystal. Volmar promises to reward in exchange for release… however, there isn’t time, for the activation of this long dormant crystal has served as a beacon for those covetous of power. The covetous gaze of a demon lord (pick a good one) falls upon it, and their minions are sent to claim this crystal, and its prisoner, oozing from one of four separate planar breaches in the room.

Volmar can aid the characters in repairing the breach, but only if the characters can keep the demons from corrupting the crystal with their twisted essence.

Fight for the Crystal

The fight that ensues is not about defeating all the enemies–low-level demons will continually stream through the breach as needed–but rather the PCs must keep the 30 ft. area around the crystal free of demonic presence.The fight proceeds as follows: The Crystal floats at the center of a 30′ radius sphere, taking up the 10’x10′ area at its center. 4 Planar Breaches appear in opposite corners of the room, each breach is a 5’x5′ area that is a one-way portal to the abyss.

If the players manage to keep the demons out of the radius for 3 rounds, Volmar uses his power to seal the breaches, and asks the players for freedom. If granted, Volmar will gift the PCs a boon. The one-time casting of a powerful spell (Volmar can cast up to 8th level spells as per Wish). This can be used to resurrect a fallen player, or to gain access to otherwise hard to come by information. Players are given a shard of the crystal that they can use to call upon Volmar to fulfill the boon.

If the demons manage to occupy the radius for 3 consecutive rounds, the crystal is corrupted, and vanishes in a fiery explosion that knocks all PCs prone and blinds them for 1d4 rounds. Any remaining demons return to the abyss from whence they came.

Here are suggestions for each “wave” of demons:

If the fights are going too easy for the players (they may be better at coordinating their defense) or if they are interested in a more intense fight feel free to throw a more powerful demon, like a Vrock or Glabrezu into the mix to adjust the difficulty to what your players are comfortable with. You may want to adjust the rate at which the demons appear if your players are having trouble defeating their enemies. Again, this fight is meant to show that not every fight is about defeating all the enemies you see before you. Sometimes, all you have to do is keep an area clear.

I am a fan of throwing in alternate win conditions every now and then, and an even bigger fan of encounters that, if the players should lose (because they can lose without all dying), can lead to more adventures. Perhaps players could track down Volmar’s prison, if the demons are successful. Either way, they aren’t meant to be killed by this fight.

Do you like to shake up your encounters with an occasional twist like this? What’s your favorite way? Let us know in the comments below!

Author: J.R. Zambrano
Bell of Lost Souls Staff Writer and DM, J.R. covers RPGs of all stripes and on occasion eats sandwiches. You can ask him about either at [email protected]
Advertisement
Adventure Hooks Dungeons & Dragons RPGs Rules Wizards of the Coast
Advertisement