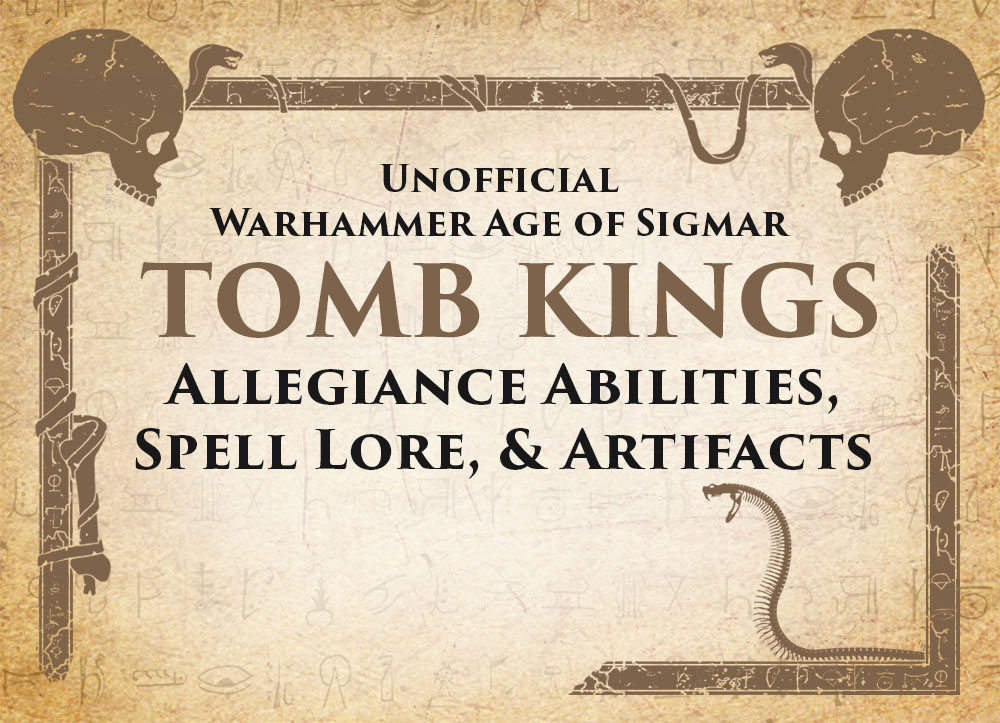 The Endless Deserts may have been silent there for a few months, but now the sands stir once more as the Deathrattle Legions of the Tomb Kings march to war. Now they do so with their very own unofficial Allegiance Abilities, Spells, and Artifacts, just like the newer armies in AoS!

That’s right, I have put together a set of rules for you to use to give your Tomb Kings a little more flavor on the tabletop. As soon as I read the Sylvaneth book I knew I wanted to make something like this for the Tomb Kings. It adds so much character to the army and brings back a bit of what they lost in AoS. I wrote the rules myself, but bounced the ideas off a small group of people for feedback. After several revisions they were all done, now I just had to make them look good.

If you have seen my past rule sets then you already know that I like to try and make them look as official as I can. Originally when I started the Endless Deserts project, my intent was to make a mini campaign book for it. After the Tomb Kings got dropped from the line that idea started switching to giving them their own Battletome. You may have seen the booklet/army list I made for Adepticon, if not you can check it out here. That was essentially my test run to see if I had it in me to do a good enough job with this. Well now I have decided it’s time to move full ahead with the project.

I am officially making an unofficial Tomb Kings Battletome for AoS right now which ill be available as a free downloadable PDF online for everyone. I have to stress again that this is completely unofficial and in no way endorsed or supported by GW. I will be writing and designing everything myself, but again, I have a small group of people who are working with me to give me feedback and advice, so this is in no way a one man show. I also have several talented artists who have volunteered their time to work with me on creating new artwork for the Tomb Kings in the Mortal Realms. There are also a few artists who were kind enough to let me use some of their fan artwork they have already created. I’m pretty confident that the artwork for this book will be awesome.

These six pages of rules are lifted straight from the in progress Battletome, so they’ll give you a pretty good idea of the aesthetic and level of quality I am shooting for. The three illustrations included in this ruleset are from Kenneth Erickson and Max Fitzgerald, who are two of the artists working with me. I’m really happy with how this all turned out, and let me tell you, it was a bit of a challenge trying to replicate the border style in the Spell Lore and Artifacts page to have a Tomb King vibe. Without further ado:

You can download it from the viewer above or from this link here. I hope you like it, and please give me any feedback you have on this. The final Battletome won’t be out for several months now, so I will have time to tweak and change these before the final release. I would like to thank Alexander Nygard, Steve Foote, Vincent Venterulla, Eric “Stonemonk Gamer” Herkert-Oakland, Brad Schwandt, and anyone else I may have forgotten who gave me feedback on this.But that’s not all! Today the Endless Deserts website will be updated with this rule set, but also a gallery page of Steve Foote’s Tomb Kings army of Sobek. 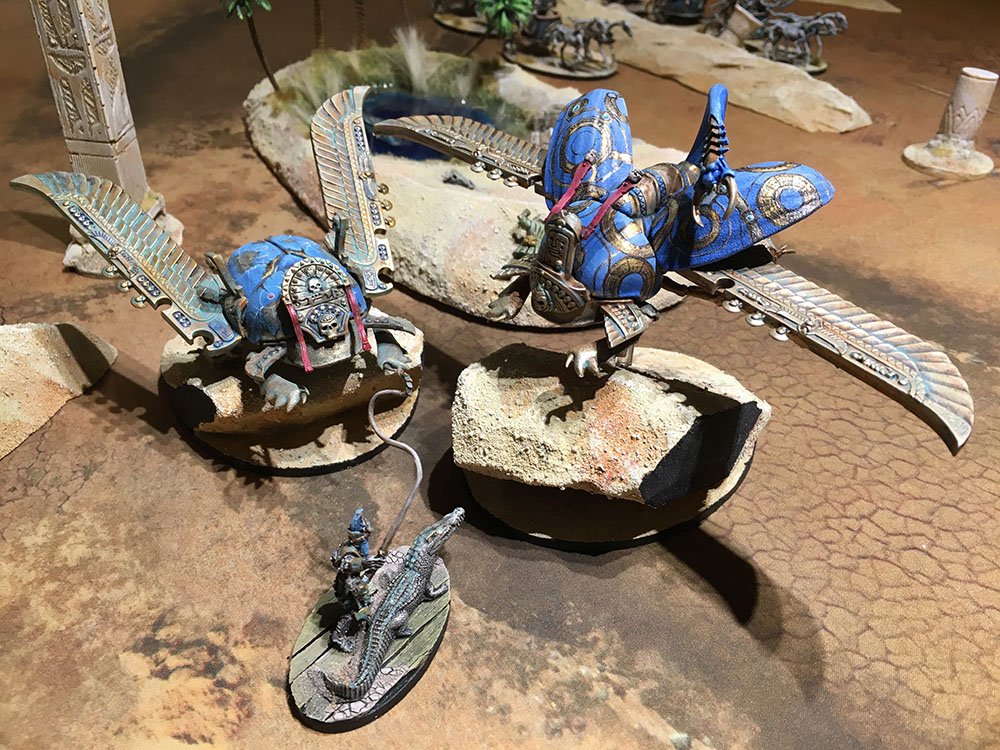 You can see the full gallery here.

Also available today are a set of desert themed tokens from the Mortal Realms podcast. These are great for keeping track of all of the bonuses and other effects on your units. You can download the high quality free PDF here. 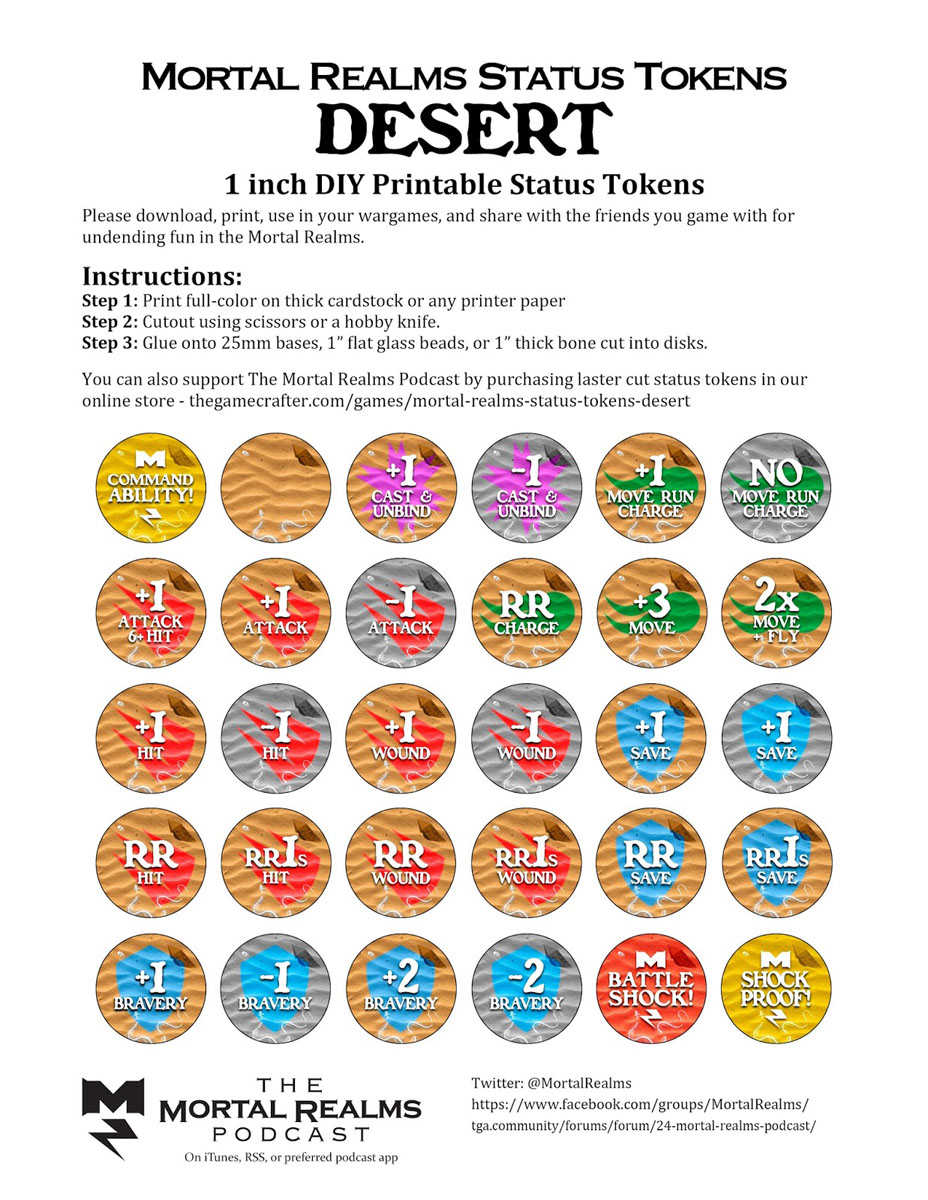 These are available for purchase as laser cut tokens here from the Mortal Realms. If you want to support their podcast this is a great way to do that and you get some cool tokens in the bargain.

I had a ton of fun making these and hopefully you have a lot of fun using them in your games. It’s in the ruleset, but I should mention it here again. Since these are completely unofficial you should definitely get your opponent’s permission before using them in any game. That being said, I can’t wait to hear back on how these go in your games.

Keep an eye out here and at the Endless Deserts website for updates on the Battletome. You can always follow me on Twitter for more frequent updates and there is also an Endless Deserts Facebook page.