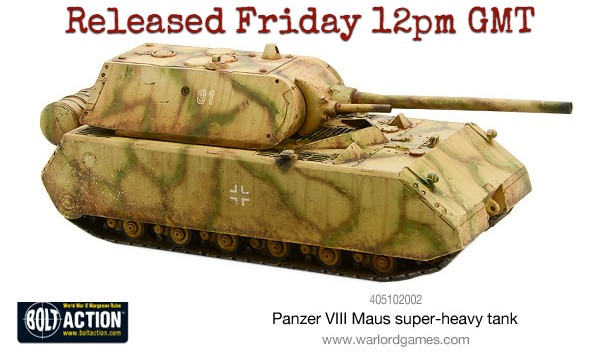 This will be available tomorrow in limited quantities – make sure you get yours!

This Friday Warlord release a model of one of the most enigmatic armoured fighting vehicles of the Second World War. The subject has the fairly innocuous designation VK100.01 PorscheType 205 yet to any serious student of WW2 AFVs this subject is better known as the Panzerkampfwagen VIII Maus (Mouse).

Prototype V2 ready to head to the front

This example of late war German imagination may be named after a tiny rodent but it is anything but mouse like. Weighing an astonishing 188 metric tons the Maus still holds the record as the heaviest fully enclosed armoured fighting vehicle ever built. Unlike the majority of the so-called ‘paper panzers’, advanced German tank designs which only existed in technical schematics and project documentation, the Maus was actually built with two prototypes almost complete and perhaps as many as 9 others under construction when Hitler cancelled the programme in late 1943.

There are even unsubstantiated rumours that one of these prototype vehicles may have been used in combat against the Soviets. Speculations on how the Maus would have actually performed in combat are of course securely in the realms of ‘what-if’. However, one of the great things about Bolt Action and wargaming in general is you can experiment with these remarkable examples of the ‘what might have been’ and incorporate them into your gaming. I can imagine that there are plenty of ‘tread heads’ out there in the general Bolt Action Community who will find the temptation of adding one of these monsters to their late war German army difficult to resist. With the recent release of Konflikt ’47 there is also no reason why the Maus cannot be incorporated into German Army lists for that game also.

Find out more about this monstrous beast (and how it works in your games of Bolt Action and Konflikt’47) when it’s released at 12pm GMT (6am CST) Friday 20th January in the UK and US web stores!

Go to the Warlord Webstore