We are continuing our week of Disciples of Tzeentch coverage on BoLS. Let’s take a look at some Daemonic Battalions.

Welcome to  Chaos Battletome: Disciples of Tzeentch, the latest GW Age of Sigmar book dedicated to Chaos.  We’ve been buried in Age of Sigmar Khornate models for over year and it feels good to move on to a new power – the Changer of Ways.

This books is a new style Battletome that is fully in line with recent post General’s Handbook  releases such as Beastclaw Raiders. That is, you get Allegiance Abilities, Artifacts, Gifts, TWO new psychic lores (for daemons and mortals), and last but not least, Pitched Battle points. 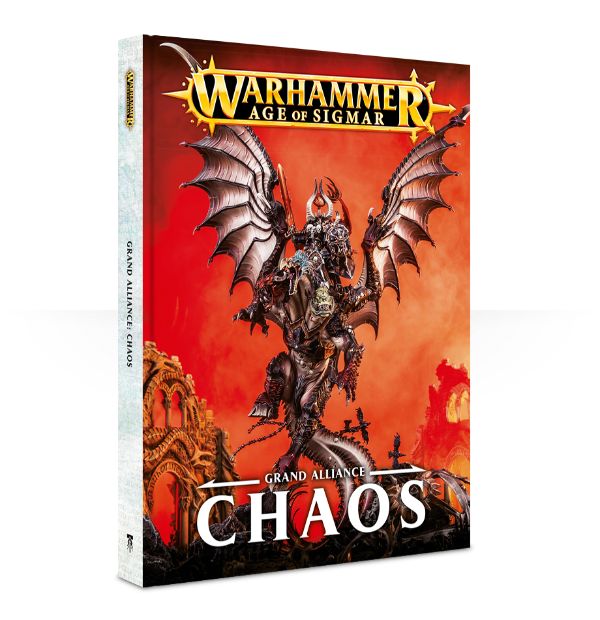 The book builds heavily upon the Tzeentch Arcanites and Daemons of Tzeentch sub-factions already found in the Grand Alliance Chaos book. Most those units are in Disciples of Tzeentch and a bunch of new ones and many battalions.  Let’s take a look at the table of contents: 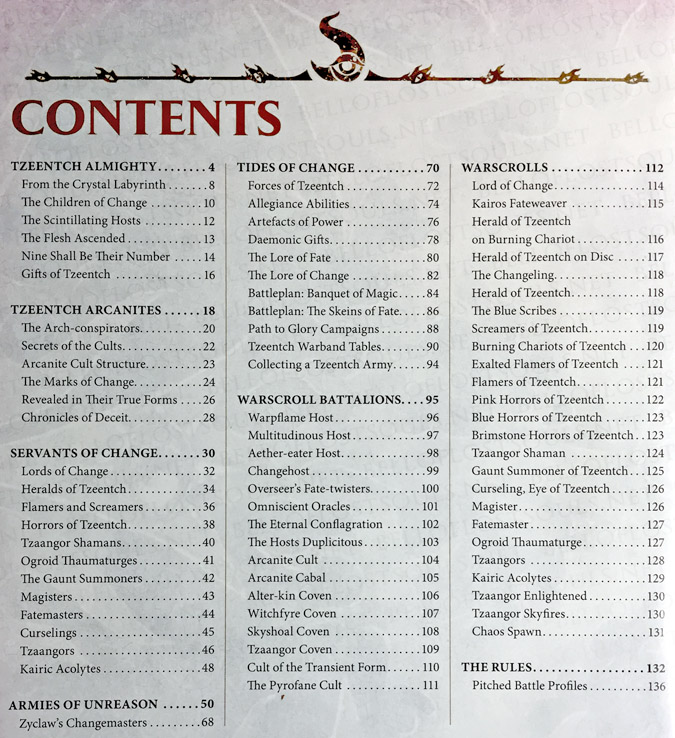 The Batallions and Warscrolls come next, with some very interesting standouts here and there.  Today we are going to take a peek at one half of the Battalions – those composed of the Daemonic forces of Tzeentch.  Now we aren’t here to spoil the entire book for you – go buy it!  Instead we are going to show you one of the most potent, and go over the others as brief summaries.  For all the mortal followers battalions, you’ll have to wait till the weekend.

Multitudinous Host: This is the big one. Maybe the best in the entire book. Look to see this on the tabletop.  The Battalion has a lot of units, but they are very cheap individually, so it’s not as bad as it looks to fit into an army.  The big ability is a pretty decent amount of FREE models added to all the Horror units each turn. Remember these are Horrors we are talking about, so it’s already a huge pain in the butt to kill them all with the splitting. 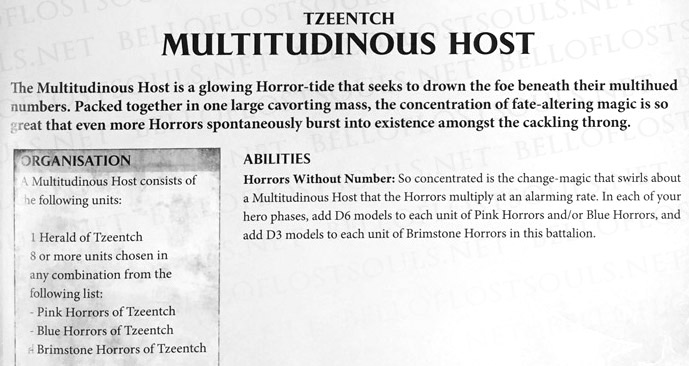 I expect to see this in EVERY Disciples of Tzeentch list.

Aether-eater Host: All Screamers, Discs and Chariots. These units heal themselves by unbinding enemy spells.

Overseer’s Fate-twisters: Lord of Change and little daemonic heroes. They expand and allow rerolls from your Destiny Dice pool.

Omnicient Oracles: Fateweaver and 3 LoCs. They really hate “1s” and pretty much re-roll any they don’t like.

The Eternal Conflagration: The first giant “Battalion of Battalions”. Lord of Change can cast magic through Flamers like Warmachine Arcnodes. Enemies suffer penalties to hit Flamers in the Battalion.

The Hosts Duplicitous: The second giant “Battalion of Battalions”. All wizards cast more reliably and know a hilarious spell that targets nearby enemy units and makes them reverse the results of all to-hit and to wound rolls (successes become failures and vice versa)! 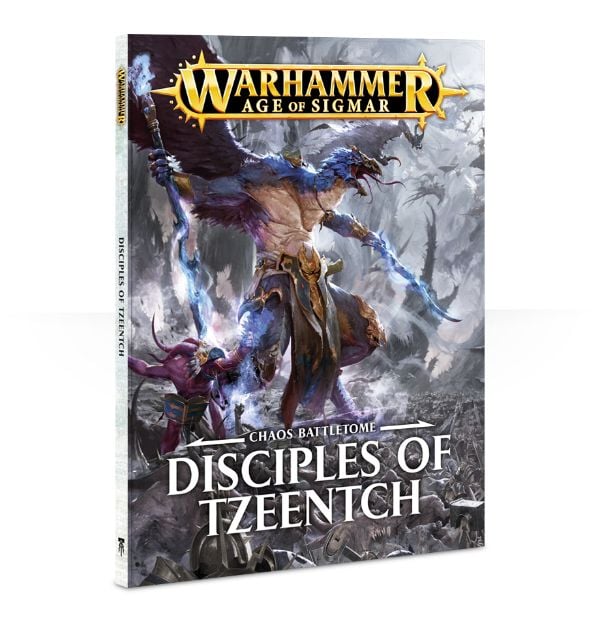 ~We have much to cover all week – so check back soon!

Author: Larry Vela
Dad, Gamer, Publisher, Pilot, Texan. All games all the time since junior-high. I started BoLS Interactive in 2006. I’m a lifelong tabletop & RPG gaming enthusiast, and internet publisher working to entertain and inform my readers every day. I've been playing RPGs and Tabletop Games since the 1970s. I'm been playing and covering Warhammer and Warhammer 40K for over 35 years.
Advertisement
Age of Sigmar AoS Chaos Rules
Advertisement

Disciples of Tzeentch: Inside the Covers