Fall of Cadia: A Peek Inside

The Warmaster Strikes at Cadia…and it doesn’t look good for the Imperium.

The next exciting narrative campaign book is coming from GW this weekend. The Gathering Storm: Fall of Cadia see the return of some of the Heroes of the Imperium on a desperate crusade to fight Abaddon’s tide of chaos.

The cover has the Warmaster in all his Glory! 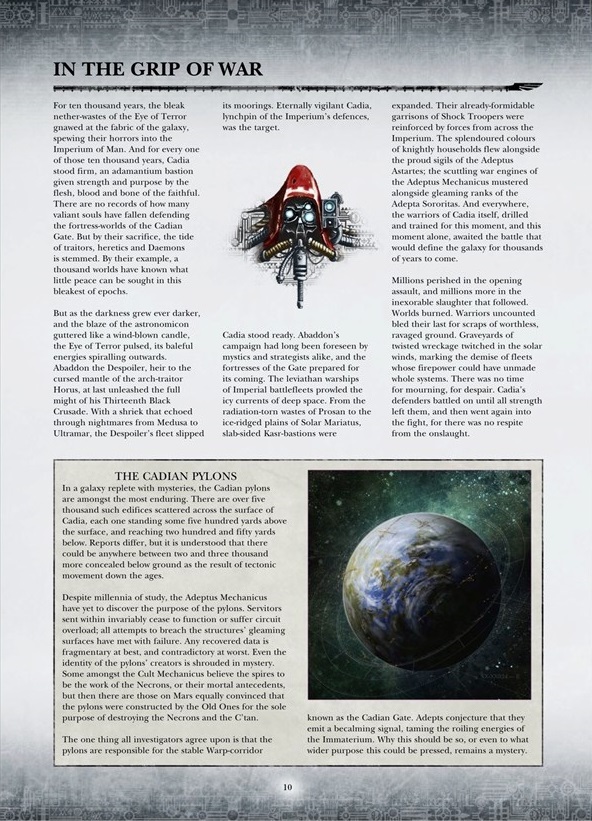 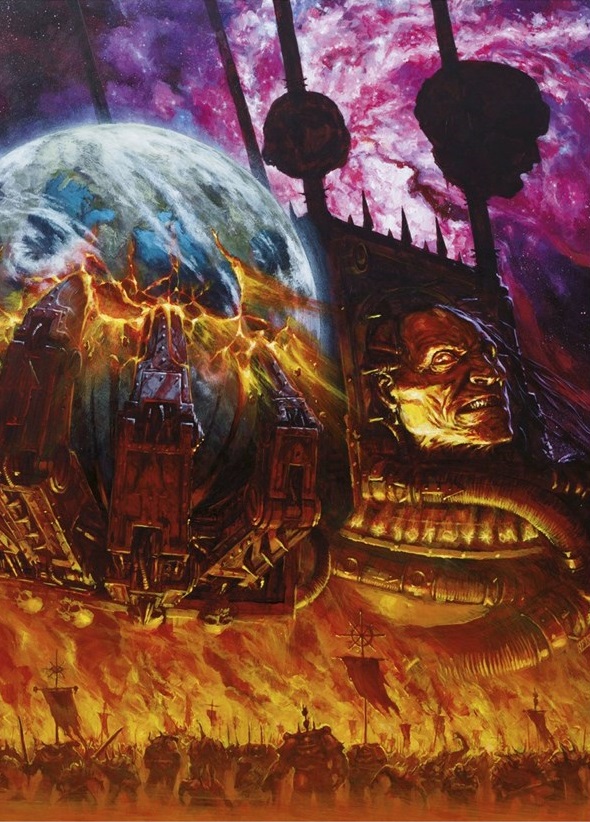 More information about the conflict and come iconic Abaddon artwork… 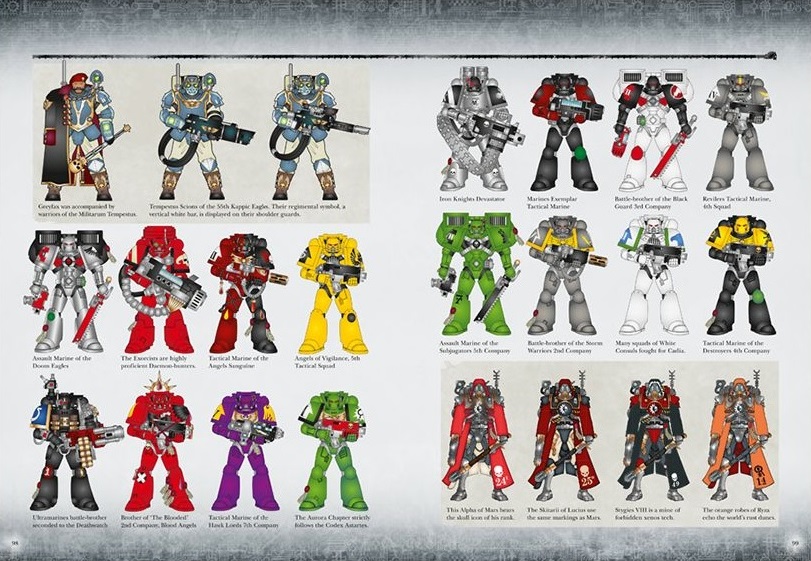 Here we get a glimpse of the Defenders of the Imperium – looks like the Blood Angels and few successor chapters as well as a a bunch of later founding chapters will be there. And you can’t have a war on Cadia without Some Scions. The Ad mech are also here in force! 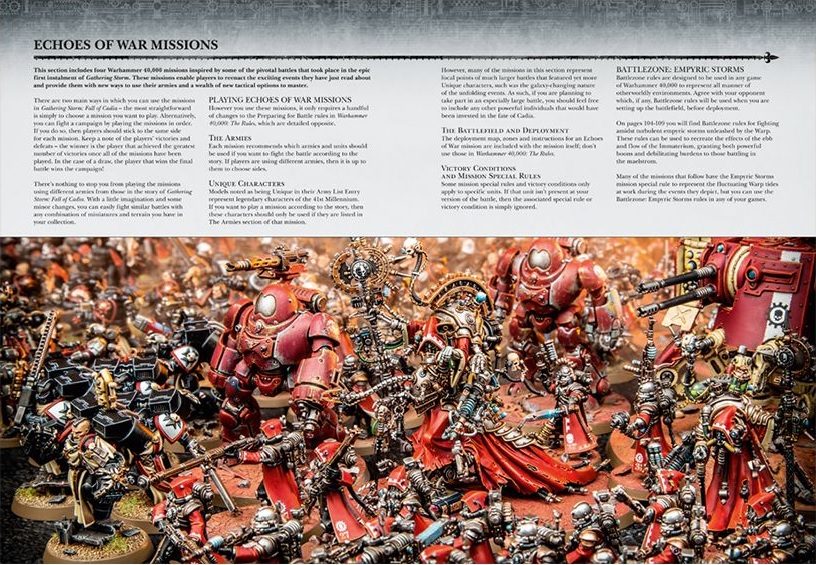 Here’s a teaser of the Echoes of War Missions – anyone else excited about this one? The Empyric Storms Chart is supposed to be really wild.

For ten thousand years Cadia has stood firm against the horrors spewed forth by the Eye of Terror. There are no records of how many valiant souls have fallen defending the fortress worlds of the Cadian Gate – but by their sacrifice, the tide of horror stemmed. But there is no sacrifice big enough to stop what is coming.

Abaddon has unleashed the full might of his thirteenth Black Crusade and little hope remains. On Cadia itself, Ursarkar Creed and manifold Imperial forces mount a desperate defence, and they are soon to be joined by the strangest and most powerful of allies. Their arrival spurs a chain of events that will change things forever – the pylons will fall, the Eye will open, and a storm will come.

Fall of Cadia is the first book in the Gathering Storm series. A 136-page hardback narrative campaign book, it introduces the Triumvirate of the Imperium – Celestine, the Living Saint, Tech-priest of Mars Archmagos Dominus Belisarius Cawl, and Inquisitor Katarinya Greyfax of the Ordo Hereticus – and chronicles the bitter battle to protect Cadia from the grasp of Abaddon the Despoiler.

Fall of Cadia contains a wealth of new rules content for Warhammer 40,000:

– full rules for fielding Saint Celestine, Belisarius Cawl and Inquisitor Greyfax with any army of the Imperium:
– Saint Celestine confers Act of Faith on nearby units
– Belisarius Cawl confers the Canticles of the Omnissiah on nearby units
– Inquisitor Greyfax brings 6 new Inquisition Tactical Objectives
– the Triumvirate of the Imperium – a formation bringing these three characters together;
– 6 new Ecclesiarchy Relics and 6 Arcana Mechanicum, usable by Adepta Sororitas and Cult Mechanicus forces;
– the Grand Convocation and Imperial Crusade detachments – combine Cult Mechanicus, Skitarii and Mechanicus Knights in one army, and Black Templars and Adepta Sororitas in another;
– Battlezone: Empyric Storms – rules for raging Warp Storm effects, some of which can be quite drastic: potentially removing invulnerable saves, or halving the effective range of psychic powers…
– 4 new Echoes of War missions.

This next part contains some pretty MASSIVE SPOILERS. Consider yourself warned. 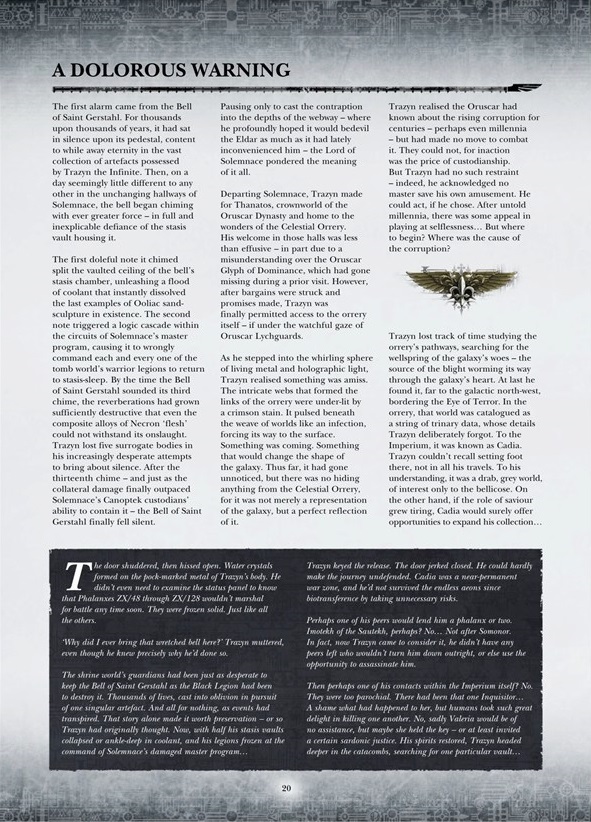 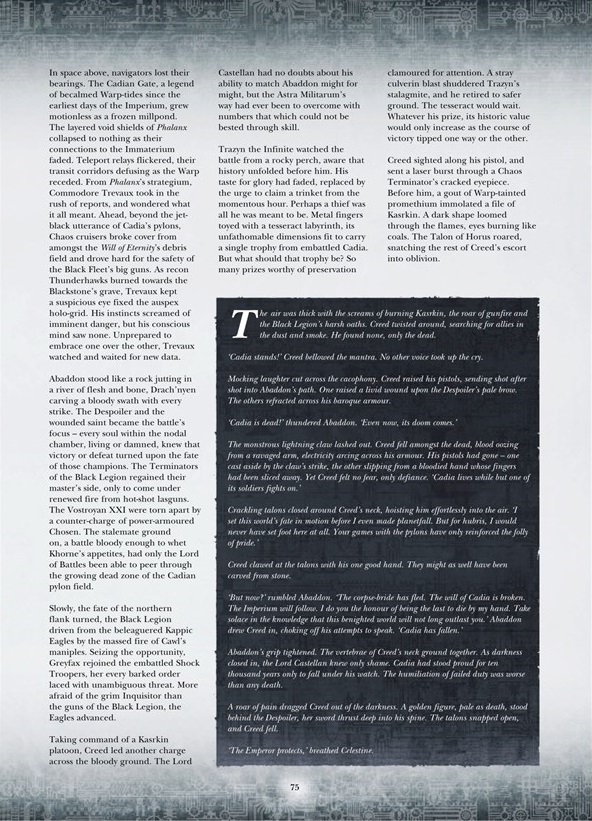 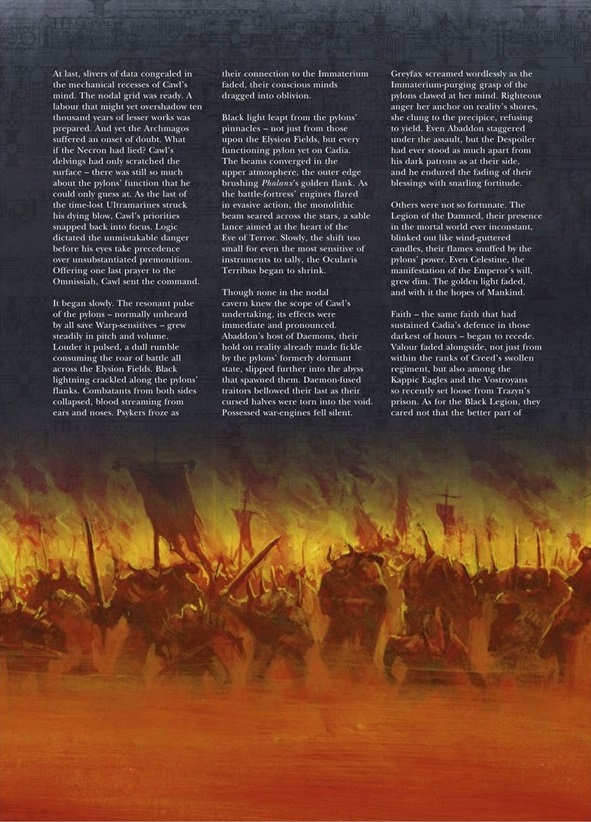 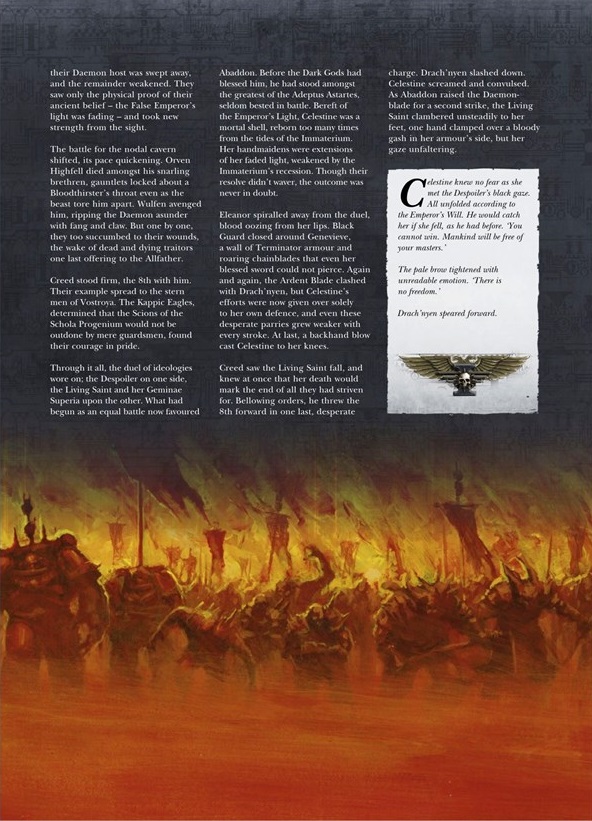 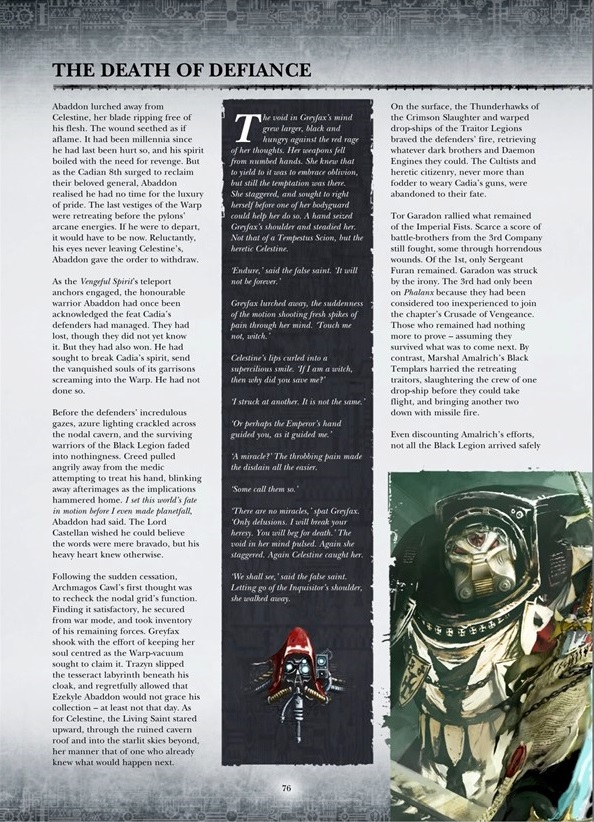 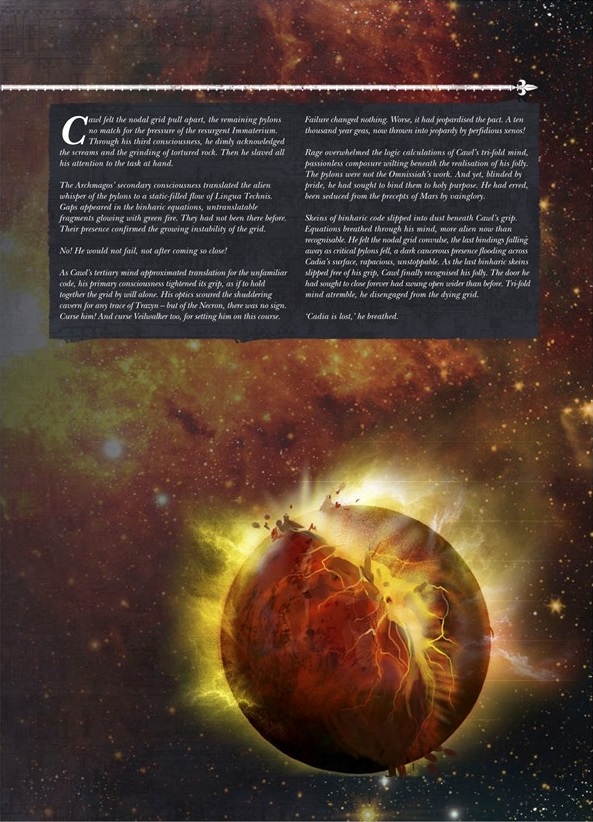 From these pages we get a sense of what is happening: Abaddon’s attack on Cadia is halted by the Combined forces of the Ad Mech, Astra Militarum, Black Templars led by Creed and Saint Celestine. We don’t get all the details but while the battle is in favor of the Imperium, Abaddon wins the ultimate prize – the destruction of Cadia.

To get the full picture of the domino of events that transpired we’ll have to wait until the book hits retailers next week – I can’t wait to find out!

No one remains unscathed when Cadia Falls… 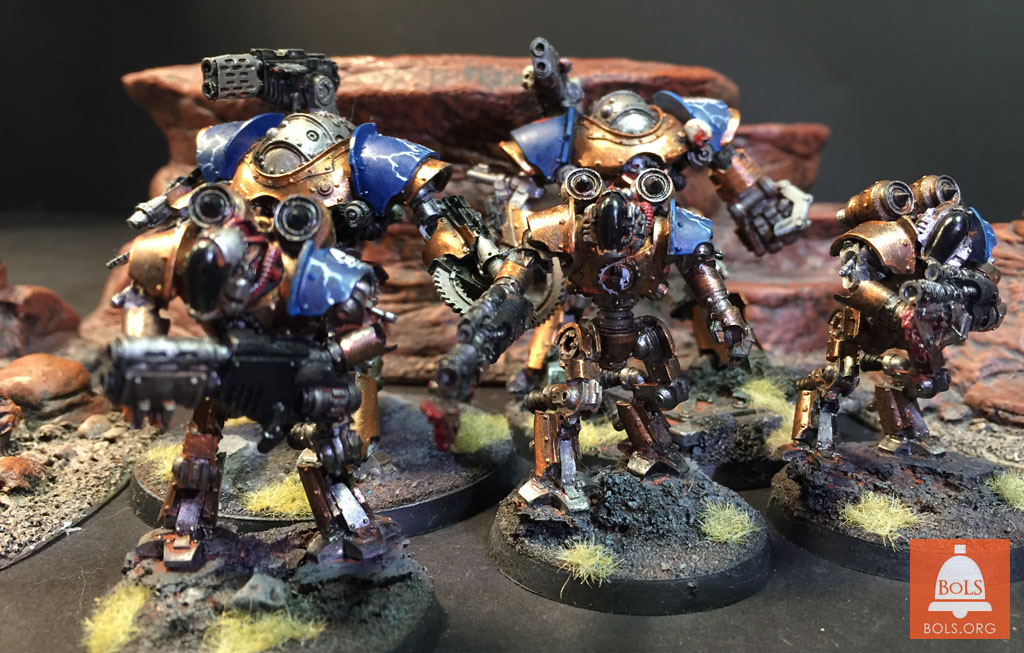