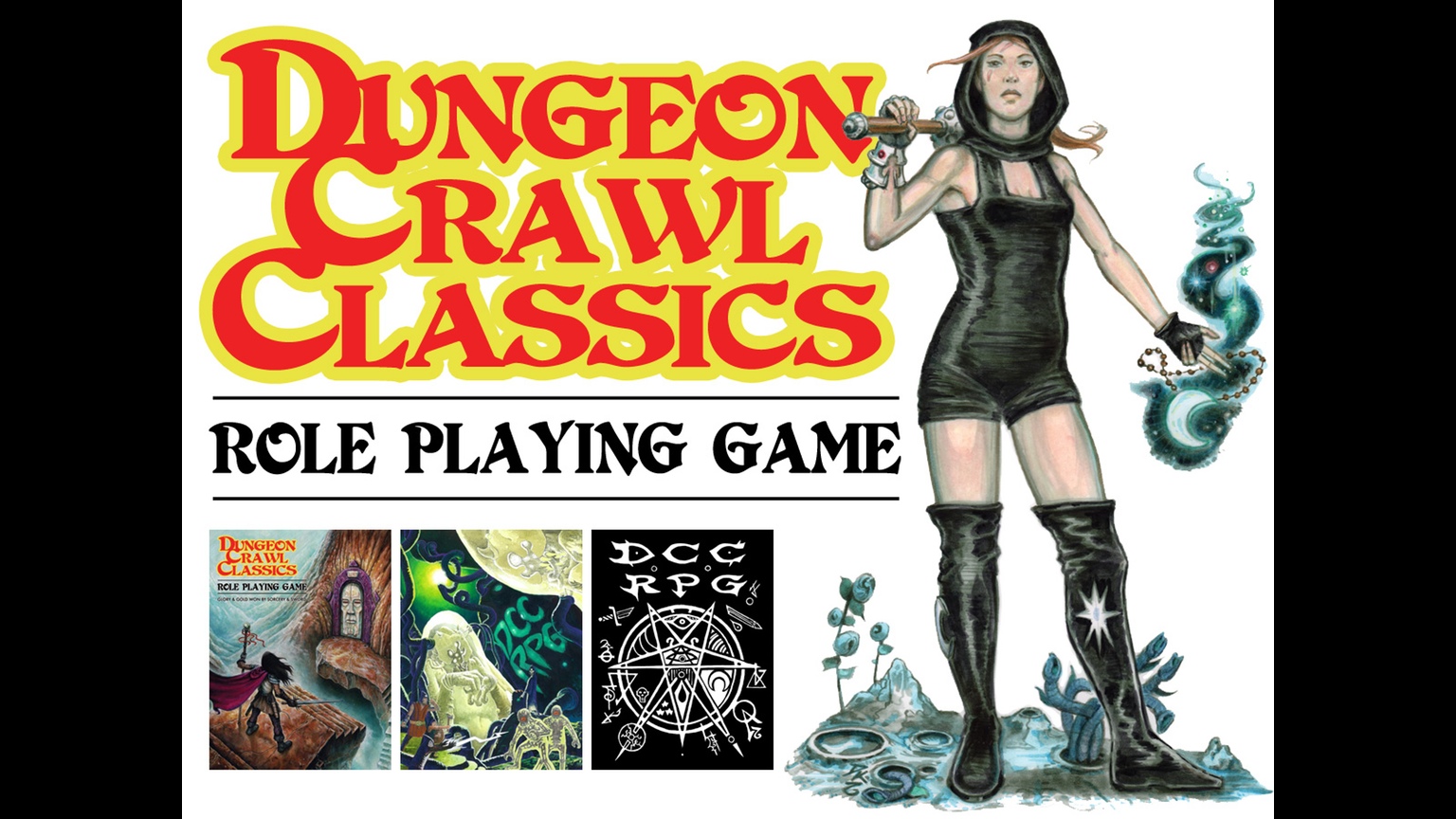 Every now and then our friends at Dragon’s Lair Comics & Fantasy bring something over that truly surprises me. I was not expecting the Dungeon Crawl Classics RPG, much less the limited Leather bound edition, but I was sure glad they brought it over:

The DCC RPG is a stand-a-lone system. You don’t need any other books to play either, just some dice, pen & paper, your friends and your imagination. It’s a complete Adventuring system that definitely has it’s roots in “retro” RPGs from the early days of TSR.

Everything in this book has a retro vibe to it, except it’s not – this is a brand new printing of this book! But the reason it has that vibe is because it’s an amalgamation of “an OGL system that cross-breeds Appendix N with a streamlined version of 3E.” Basically it’s got old school roots with a new school finish – and that’s what makes it great!

Production wise, this book is amazing. While it’s black-and-white the cover makes up for it with all that pizazz! The Red Leather with silver lettering just screams “open me up and drink of my knowledge adventurer!” And that artwork…Oh man, it’s a trip in time. 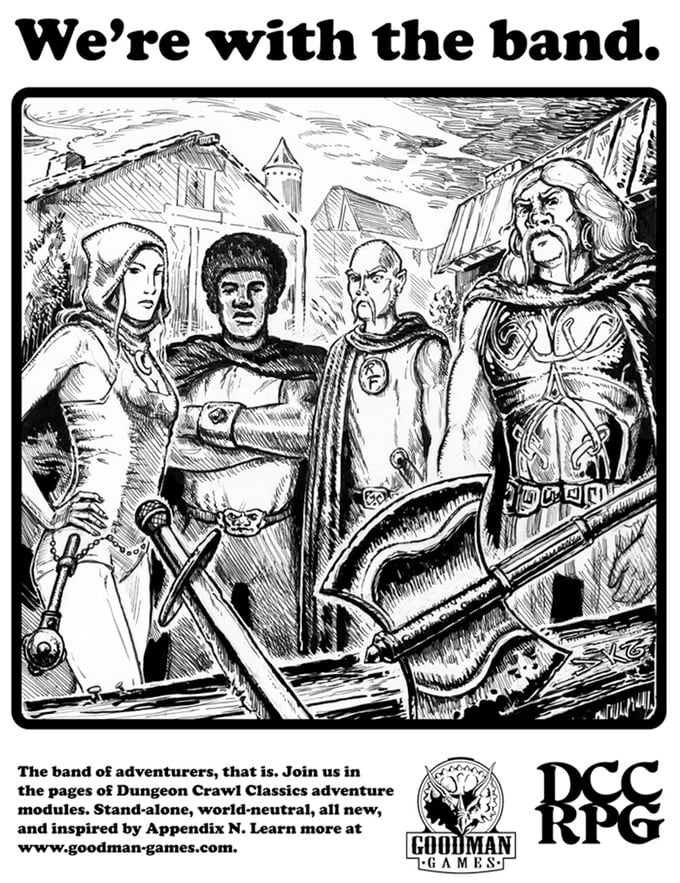 As far as adventuring goes with this book, it’s super easy to use and adapt. At it’s core, it’s still a D20 game (although there are alternate rules for ‘wacky’ dice). If you’re familiar with D20 games you’ll pick this up in no time. It’s designed to be a fast playing throw-back to RPGs. And because it’s your PHB/Monster Manual/DM guide all in one, you’ll be up and running in no time.

I would be remiss if I didn’t mention the fact that one of the coolest things about this system is the way spells and spell casting works. Basically, the higher you roll to cast a spell the better it gets. Each spell has a lengthy description and adds some narrative depth to your spell-slinging. I could spend hours reading those spell descriptions because they paint such a vivid description of what those spells do.

Overall, Dungeon Crawl Classics is a fantastic throwback packaged in some very fancy digs. If you’re looking to add some Retro to your RPG action then this is a great way to do that. Heck, even if you’re new to RPGs this is still a great book to pick-up because it’s a one-stop-shop type of book. We reviewed the limited edition but has a 4th printing coming soon for a faction of the cost. So go check out DCC: RPG and get to Adventuring! 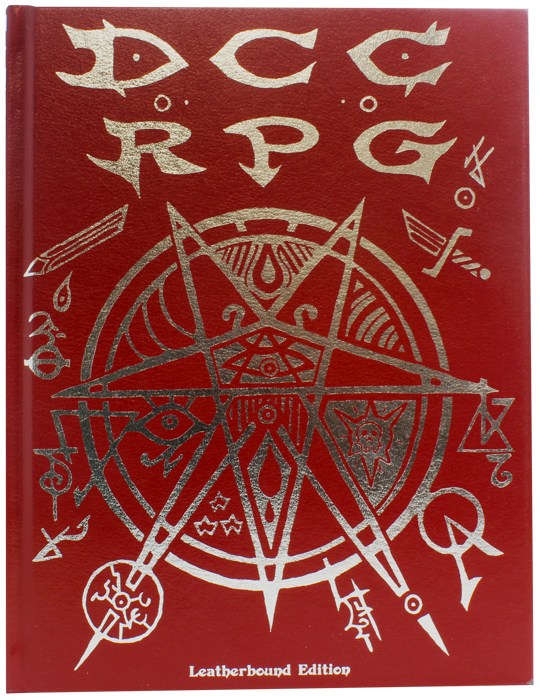 You’re an adventurer: a reaver, a cutpurse, a heathen-slayer, a tight-lipped warlock guarding long-dead secrets. You seek gold and glory, winning it with sword and spell, caked in the blood and filth of the weak, the dark, the demons, and the vanquished. There are treasures to be won deep underneath, and you shall have them.

Return to the glory days of fantasy with the Dungeon Crawl Classics Role Playing Game. Adventure as 1974 intended you to, with modern rules grounded in the origins of sword & sorcery. Fast play, cryptic secrets, and a mysterious past await you: turn the page…

This is the most coveted edition of the DCC RPG Core Rulebook – and the rarest! Produced in very limited quantities, this is the REAL LEATHER edition of DCC RPG. The interior text block is from the latest 4th printing. The cover illustration is a foil-printed rendition of the Seven Pointed Star of Sezrekan by lead DCC RPG artist Doug Kovacs, printed on real leather. This special edition includes a signature plate with the signatures of the primary authors and artists who contributed to DCC RPG. It is being produced on a one-time basis.

Author: Adam Harrison
Writer, Editor, Texas Native, and Austinite for 15+ years, Adam covers all things Tabletop Gaming. Which includes Warhammer 40,000, Age of Sigmar, D&D, Board Games and everything else that involves dice, boards, cards and a table. A hobbyist, player, and collector of miniatures and games, Adam's current obsession are his Death Armies for Age of Sigmar, his Blood Angels and Tyranids for 40k, and his ever growing Arkham Horror: The Card Game Collection.
Advertisement
Books-Novels RPGs Tabletop Spotlight Unboxing Videos
Advertisement