Fantasy Flight Games has a new rank-and-file miniatures game on the way and we’ve got an inside look at the contents!

The RuneWars Miniatures Game is heading into stores soon! We got to sit down and take a good look at the core box contents.

RuneWars the Miniatures Game core box is a big box. It’s comparable in side to Star Wars: Armada and has tons of stuff packed inside. It’s enough for two players to have a starting force and get games in, it’s a great starter set and intro into the game. 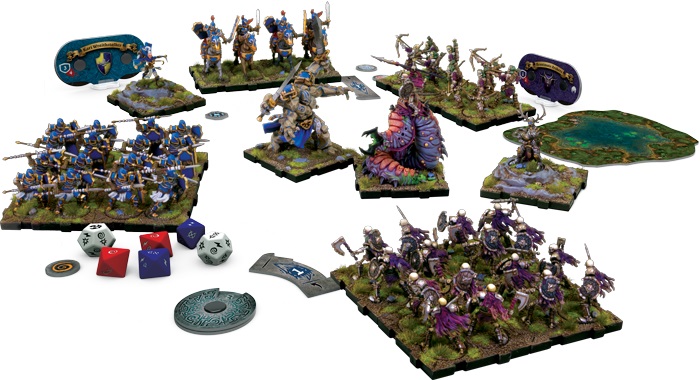 In terms of miniatures, these are pretty nice plastics. They are pre-cut and snap-fit assembly. If you’re a serious hobbyist you’ll probably want to use some glue for assembly. A once over with a file or modeling knife to clean off any flash might not hurt either. They do hold up well in terms of detail, also. The poses might be limited but that doesn’t mean they aren’t dynamic to start with. The units have a good mix of flowing cloth and armor to create a sense of movement. The larger, centerpiece models are also extremely cool by themselves. I’m a BIG fan of the Rune Golem already.

The rest of the components are just as high quality. Fantasy Flight Games is known for having tokens in their games and RuneWars does not disappoint. Everything is made from that durable card-board they use with their other products. For the average user that means it should last you for a long time. If you’re a hardcore player, you’re probably going to want to pick-up some acrylic templates as soon as those become available.

Everyone gets a Dial!

The box also comes with three books you’ll want to read through. The first is the “Learn to Play” book. This is your basic breakdown and tutorial for the game. It goes through all the components, basic rules, and the general “how to” for RuneWars. The second book is the “Rules Reference” book. This one is all about the nitty-gritty details of the game. Each rule is numbered and each subsection is labeled. It’s a little bit like a legal document, but in a good way. Everything is written to be explicit and clear. They even have examples included for some of the more complex rules. This is fantastic for anyone who is interested in higher-level tournament play.

The final book included is the “Lore Guide” which is exactly what it sounds like. If you’re already familiar with RuneBound and the associated world, this game is part of that same world: Terrinoth. If you’re not familiar with RuneBound at all, then this book is a perfect introduction. This is a setting that has been cultivated by FFG for years with their BattleLore games, Decent and the RuneWars board game. While many folks will want to dive right into the rules, I find myself drifting back to the lore guide just to learn more about the world of Terrinoth and why these two factions are fighting.

On top of that, the Lore Guide also hints at two more factions that might make an appearance: The brutal Uthuk Y’llan and the Magical Latari Elves.

RuneWars is a game that looks like the start of something big. The core set is a solid buy and creates a study foundation for things to come. FFG has already announced more expansion packs to help fill out the forces. If you’re looking for a rank-and-file miniatures game that will have a strong organized play program and lots of miniature support in the future then you might want to check out RuneWars when it drops later this year.

Author: Adam Harrison
Writer, Editor, Texas Native, and Austinite for 15+ years, Adam covers all things Tabletop Gaming. Which includes Warhammer 40,000, Age of Sigmar, D&D, Board Games and everything else that involves dice, boards, cards and a table. A hobbyist, player, and collector of miniatures and games, Adam's current obsession are his Death Armies for Age of Sigmar, his Blood Angels and Tyranids for 40k, and his ever growing Arkham Horror: The Card Game Collection.
Advertisement
FFG - Fantasy Flight Games Miniatures Runewars Tabletop News Unboxing
Advertisement