Fantasy Flight Games has some big releases for Netrunner and somerReprints for the Star Wars RPG! 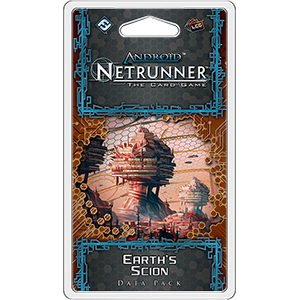 Who will control Mars? Every twenty-four hours and forty minutes, the Big Four insinuate more of their products, services, management, and agendas into every aspect of Martian life, and in Earth’s Scion, the third Data Pack in the Red Sand Cycle for Android: Netrunner, we watch as their presence spreads more fully across the whole of the red planet.

Can the runners who migrated across the solar system for a taste of freedom push back against this corporate expansion? And what role will the Martian Clans play? Will they trade generations of grudges and tradition for easy corporate credits? Will they feed vital information to buccaneering net jockeys? Or will they play both sides against each other?

With fewer resources to go around, all factions must experiment more and play it less safe. The biggest question is—what are you prepared to sacrifice? The sixty new cards (three copies each of twenty different cards) of Earth’s Scion reveal how far some factions are willing to go in order to see their vision for Mars come to pass. 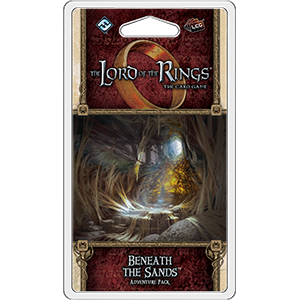 Beneath the Sands is the third Adventure Pack in the Haradrim cycle for The Lord of the Rings: The Card Game, and its new scenario makes it clear that there’s more than Haradrim to fear among the lands of Harad. As several of Middle-earth’s greatest heroes continue their perilous homeward journey through the hostile lands of Harad, they find evidence that a pack giant spiders have dragged people under the dunes. Compelled to investigate, these heroes must crawl into the spider’s tunnels, only to navigate a scenario that weaves through a labyrinth of cobweb-choked darkness, blocked passages, and deadly spiders. Time is of the essence, as the spiders’ victims may yet be alive, but you’ll need to be clever and attentive lest you become lost underground.

With scenario-specific rules that allow you to squander your progress when you get off-track, even if you quest successfully, Beneath the Sands places an emphasis upon the game’s questing and exploration in a way that truly allows you to feel trapped in a maze. Fortunately, the Adventure Pack also comes with a new Scout hero and twenty-seven player cards (three copies each of nine different cards) to help you get back onto the proper path – or forge your own. 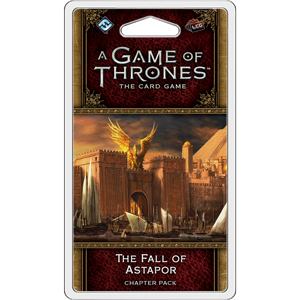 Bloody plots consume the Seven Kingdoms, as once-loyal bannermen turn against the kings that they had sworn to serve. A procession from Dorne marches north to King’s Landing, intent on exacting vengeance against the Lannisters. Robb Stark moves quickly to reclaim Winterfell, unaware of the dark plots being hatched in Harrenhal and The Twins. And on the continent of Essos, Daenerys Targaryen liberates the city of Astapor from the Good Masters and wins an army of Unsullied in the manner of Old Valyria—with fire and blood!

The Fall of Astapor is the third Chapter Pack in the Blood and Gold cycle for A Game of Thrones: The Card Game, continuing the saga of A Song of Ice and Fire into the third volume, A Storm of Swords. Within this pack, you’ll find more cards focusing on the new bestow keyword, powerful new economy, new ways to spend your gold, and the subtly growing influence of House Frey. You’ll even have the chance to add iconic characters and locations to your deck, including Grey Worm, The Twins, and a new version of Theon Greyjoy. 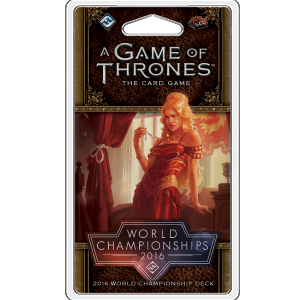 Newly redesigned with gorgeous, full-bleed art, this deck is a card-for-card recreation of the Lannister Banner of the Wolf deck that Joe Mirando piloted to victory on the tourney ground of the 2016 A Game of Thrones: The Card Game World Championships. Whether you’re a new player looking for a pre-made deck as an entry point to the game, an intermediate player who wants to use this deck as a guide for experimentation, or an expert looking for full-art versions of iconic cards and extra copies of key neutral cards, this deck has something to offer for every player. 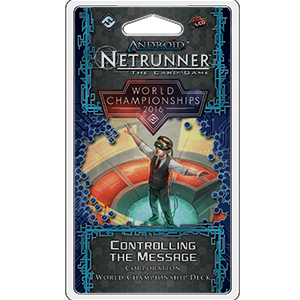 The 2016 Android: Netrunner World Champion Corp Deck is a card-by-card recreation of the deck piloted by Chris Dyer to a first place finish at the 2016 Netrunner World Championship last November. The deck features extended full-bleed art for all 50 cards as well as new visuals for NBN Identity Controlling the Message. This fully-legal deck not only gives veterans a new visual format for classic cards, but allow new players to experience dominating strategies.

The 2016 Android: Netrunner World Champion Corp Deck puts the pressure on the runner at all times with tags. Blow up resources, drain accounts and swap agendas to climb your way to victory while keeping the runner down. Controlling the Message’s ability provides a natural defense for players to learn behind, making it a powerful learning tool for those new to the game. 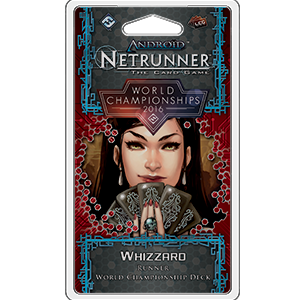 The 2016 Android: Netrunner World Champion Runner Deck is a card-by-card recreation of the deck piloted by Chris Dyer to a first place finish at the 2016 Netrunner World Championship last November. The deck features extended full-bleed art for all 46 cards featured. This fully-legal deck not only gives veterans a new visual format for classic cards, but allow new players to experience dominating strategies.

The 2016 Android: Netrunner World Champion Runner Deck uses powerful economy cards to put pressure on the corp whie boosting your credit count. Use powerful icebreakers and sapping viruses to bring the corp down to the runner’s level, where you are king. This classic Netrunner experience will bring feelings of nostalgia to veteran runners, and feelings of power to players just jacking in. 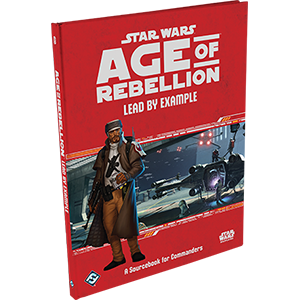 If it weren’t for Commanders who were willing and able to take up the mantle of leadership, those hungry to liberate the galaxy from Imperial rule might never have come together to form the Rebellion. But command, whether it entails shaping military strategy, training new recruits, or being a recognizable face of the Rebel Alliance, is not easy. Lead by Example, a sourcebook for the Star Wars®: Age of Rebellion roleplaying game, offers Commanders the talents and other tools they need to succeed.

Inside the 96 pages of this career supplement, players and Game Masters will find three new Command specializations – Figurehead, Instructor, and Strategist – as well as new playable species, gear designed to support Commanders in the field, and vehicles ready to take on Imperial fleets. The book also features detailed guidelines for situating PCs within large-scale, cinematic mass combat scenes and suggestions for crafting engaging, high-stakes, military campaigns. 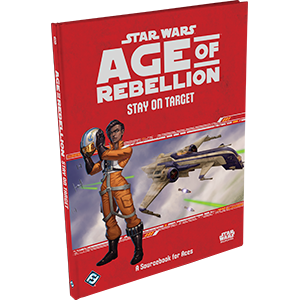 The first book-length rules supplement for the Star Wars®: Age of Rebellion™ Roleplaying Game, Stay on Target focuses on expanding the Ace career, making it more versatile and allowing your Ace characters to hone their talents to all-new levels! You’ll find three new Ace specializations, as well as new signature abilities, playable species, starfighters, modifications, and equipment. Game Masters gain new tools to help them incorporate Aces, starfighters, mounts, and rivals into a wide range of exciting and memorable adventures. Additionally, while the new rules and materials in Stay on Target may focus on the Ace career, they also offer new options for any character looking to master a starfighter, vehicle, or alien mount. 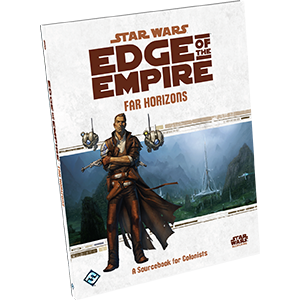 Far Horizons is a sourcebook for Colonists making their mark at the fringe of the galaxy in Star Wars®: Edge of the Empire™. With new talents, spaceships, and gear, Colonists will be able to thrive in even the harshest circumstances that come their way. Three new specializations, the Entrepreneur, the Performer, and the Marshal, offer new ways for Colonists to expand their options (and make some cold, hard credits), while GM’s and other players will find new gear and setting information to bring the Edge of the Empire to life.

Author: Adam Harrison
Writer, Editor, Texas Native, and Austinite for 15+ years, Adam covers all things Tabletop Gaming. Which includes Warhammer 40,000, Age of Sigmar, D&D, Board Games and everything else that involves dice, boards, cards and a table. A hobbyist, player, and collector of miniatures and games, Adam's current obsession are his Death Armies for Age of Sigmar, his Blood Angels and Tyranids for 40k, and his ever growing Arkham Horror: The Card Game Collection.
Advertisement
Card Games FFG - Fantasy Flight Games Netrunner Star Wars Tabletop News
Advertisement 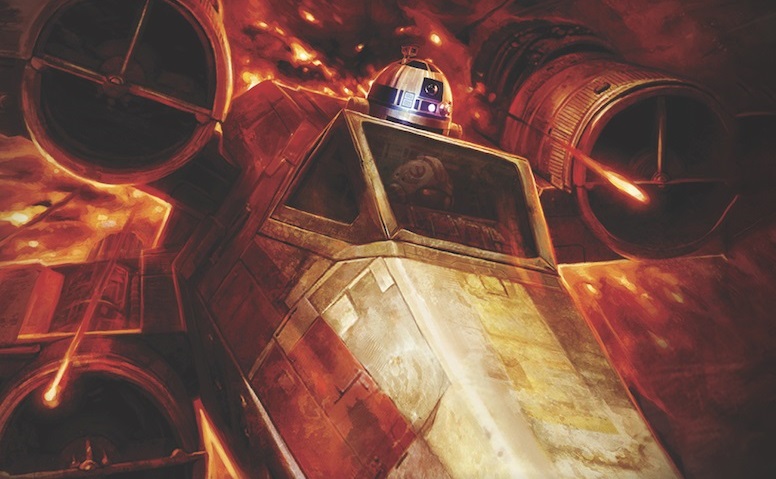