STAW: Breaking Down the Factions

How does each Star Trek Attack Wing faction play? Report to the bridge Captain!

Hey Everybody! Raven Jax back again to tell you a little more about Star Trek Attack Wing. Last time I introduced the game and why you should play it. This time I want to break down the main factions in the game and give you some idea of what they do and how they play.

In terms of meta and power level, I’ve broken it down into three tiers. This is just my general guide for newer players. I’m sure there will be plenty of disagreement about which faction belongs where. 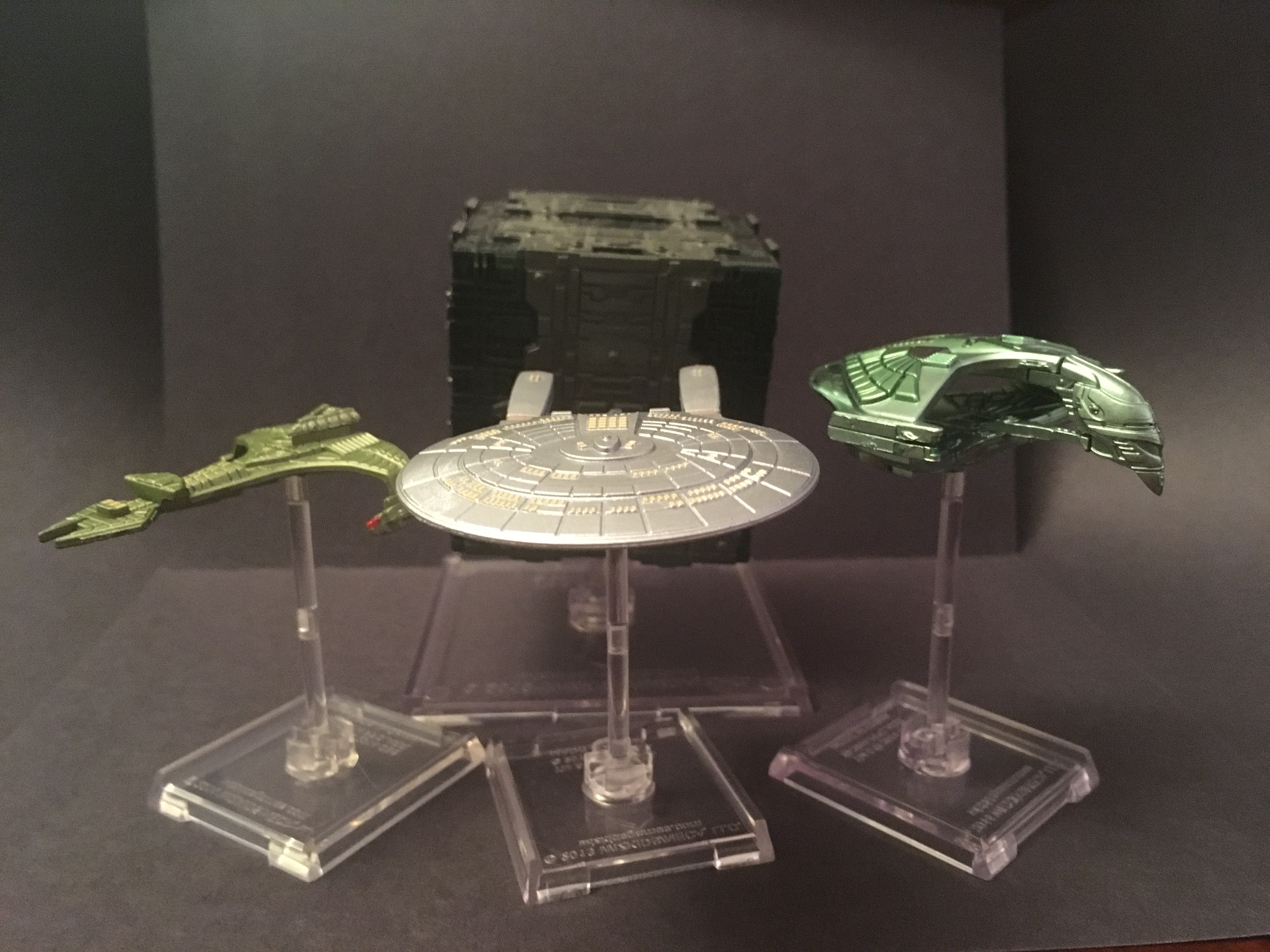 – Can field a competitive three-ship fleet all by themselves

Federation – Good at pretty much anything, as befits the “hero ships” of the show. Federation ships tend to have more shields than hull. The Federation is also incredibly flexible, with tons of different sizes and classes of starships, and can field a ship to do just about anything you want it to. With many STAW events focused on running missions while you play, this means that Federation ships can be kitted out to excel at just about any mission. Also, Federation has some of the best captains in the game with the highest skill levels.

Klingon – Tend to have more hull than shields, and are definitely offensive focused. On average, their ships have more attack dice than equivalent ships in other factions, and have some great combat tricks up their sleeve. Also, they have lots of effects that will allow you to do additional damage to enemy ships, but at the cost of doing damage to your ships in return. Has one of the best low-cost ship classes in the game: the famous Bird of Prey.

Romulan – Usually have very-high hull ships, one of the highest hulled factions in the game. They have it because of how much they rely on Cloaking (In STAW, cloaking a ship requires you to drop your shields, therefore Romulans rely on having high hull values to stay alive). Romulans rely a lot on cloaking, rolling lots of defense dice, evading firing arcs, and having lots of special tricks up their sleeves. They are not (with one notable exception) offensive powerhouses. They also don’t have access to any mid-range ships. Their fleets are all smaller, weaker ships, or large, high-point value battleships.

Borg – In the Star Trek universe, the Borg are arguably the most powerful and most feared faction. WizKids wanted to recreate this on the tabletop. They did it so well in fact, that they warped the game and had to change the rules on several of the Borg’s mechanics. As it stands now, the Borg have a slightly different way to move than any other faction. Also, they can only fire at two-thirds of the range of any other faction. Most of their ships also don’t roll any defense dice. They make up for it by having the highest hull and shield values in the game, one of the highest attack dice values in the game, and access to mechanics that allow them to take multiple actions per turn. 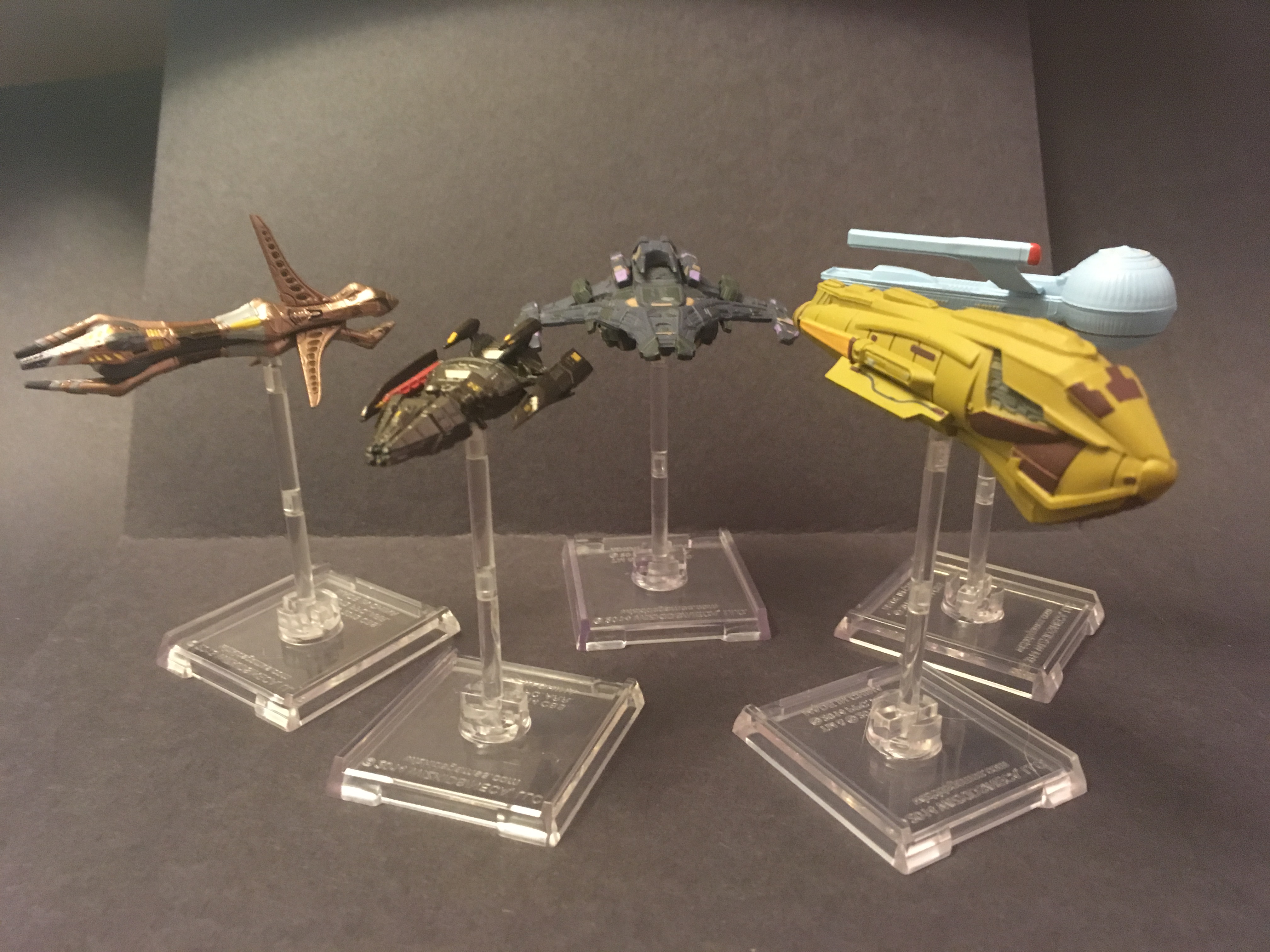 – Can contribute one or two strong ships to a fleet

Dominion – Began as one of the four main factions when the game first came out, along with Federation, Romulan, and Klingon. But the Dominion has definitely suffered power-wise since. Of the factions released when the game first came out, the Dominion has gone the longest since seeing a new ship, and the most recent one did little to fix its underlying problems. The Dominion are largely “glass cannons.” Their ships are powerful, but they all have glaring weaknesses, and if you can exploit that weakness, it can be easy to beat them. As such, Dominion has started to become one of the factions I’ve seen on the tabletop the least recently. Another quirk is that a lot of the upgrades don’t work well with each other, or are restricted to only certain ships, meaning you’re somewhat limited when you’re building fleets.

Mirror Universe – WizKid’s catch-all faction for ships and people from not only the Mirror Universe episodes of Star Trek, but any alternate timeline episodes. It’s an odd hodge-podge of ships and abilities. As a whole I’d say the faction is more offensively-focused, with a lot of upgrades and crew that are one-offs, meaning you have to discard them after you use them.

Species 8472 – They only have three ships, so the fact that they’ve impacted the game should give you some indication of their power level. Species 8472 vessels are absolute battleships, with some of the best stat lines in the game, and can easily hold their own against almost any other ship. The only downside is that they’re expensive, points wise, meaning you can’t put a lot of upgrades on each ship. This is generally their biggest weakness, plus the absence of any crew upgrade slots. The high cost is usually why you don’t see three of their ships run together. But even a single 8472 ship in a fleet is a force to be reckoned with. Also, one of the only factions that can reliably shut down the Borg’s combat tricks.

Kazon – An interesting faction that I believe is better than most people give them credit for. They have lots of cards that allow them to steal or destroy opponent’s tech upgrades, which will occasionally wreak havoc with some strategies. Many of their ships also have 180 degree firing arcs. They also have fairly solid hull and weapon stats for their ships. There have only been a few Kazon ships made however, so that means most of the good upgrades can be combined to really only create one or two reliable ships.

Independent – Similar to Mirror Universe, it’s a catch-all faction for any ship that doesn’t logically fall into any other faction. This means it’s filled with ships that only appeared in a single episode of the TV show or had no allegiance to any faction. So there isn’t really an overriding theme, and the ships aren’t necessarily naturally symbiotic with one another. But the large number of Independent ships does give the faction a lot of options and access to a lot of strong upgrades. 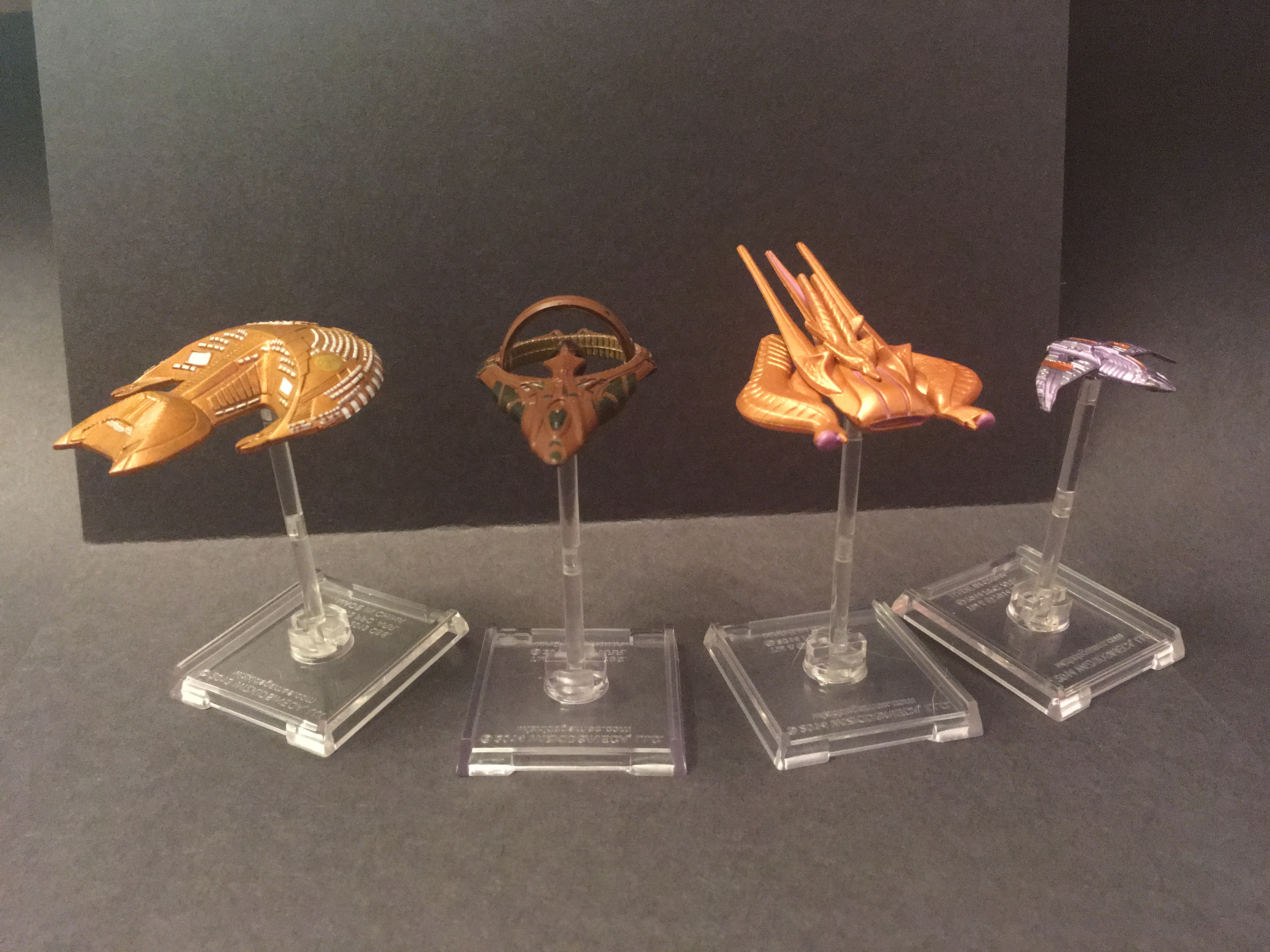 Vulcans – Meant to represent the “Enterprise”-era Vulcans before they joined the Federation. To show that these ships are from nearly 200 years before The Next Generation takes place, they are considerably weaker than most other ships in the game. Vulcans have an emphasis on “science,” translating into the Scanning mechanic in the game, so they are good for any missions where that mechanic is involved.

Bajorans – Using incredibly weak fighter-style ships, they have access to cards that will allow them to put out a lot of attack dice once and only once. But they’ll often blow up if another ship so much as looks in their direction. They are, however, the only faction that has access to mechanics that allow them to fly onto planets, if you are using planet obstacles during your game.

Ferengi – Access to some unique mechanics, including “smuggling” cards onto ships during fleet building. They can also occasionally steal upgrades from opponent’s ships. The Ferengi ships themselves, however, are just too under-powered to be much of a threat.

Xindi – The newest faction for the game, players are still getting a bit of a feel for their mechanical identity. WizKids has only in the past few months released some new ships for the Xindi. They do have access to some good ships, including one of the few large-base ships in the game. As more and more players have figured out some of the good combos available, the Xindi are likely to move up a tier or two in competitive play. As befitting their storyline from the TV show, Xindi ships rely a lot on their weapons upgrades to be useful on the tabletop.

~As always, let me know in the comments if you have any questions or remarks. Until next time, best of luck with fleet building!