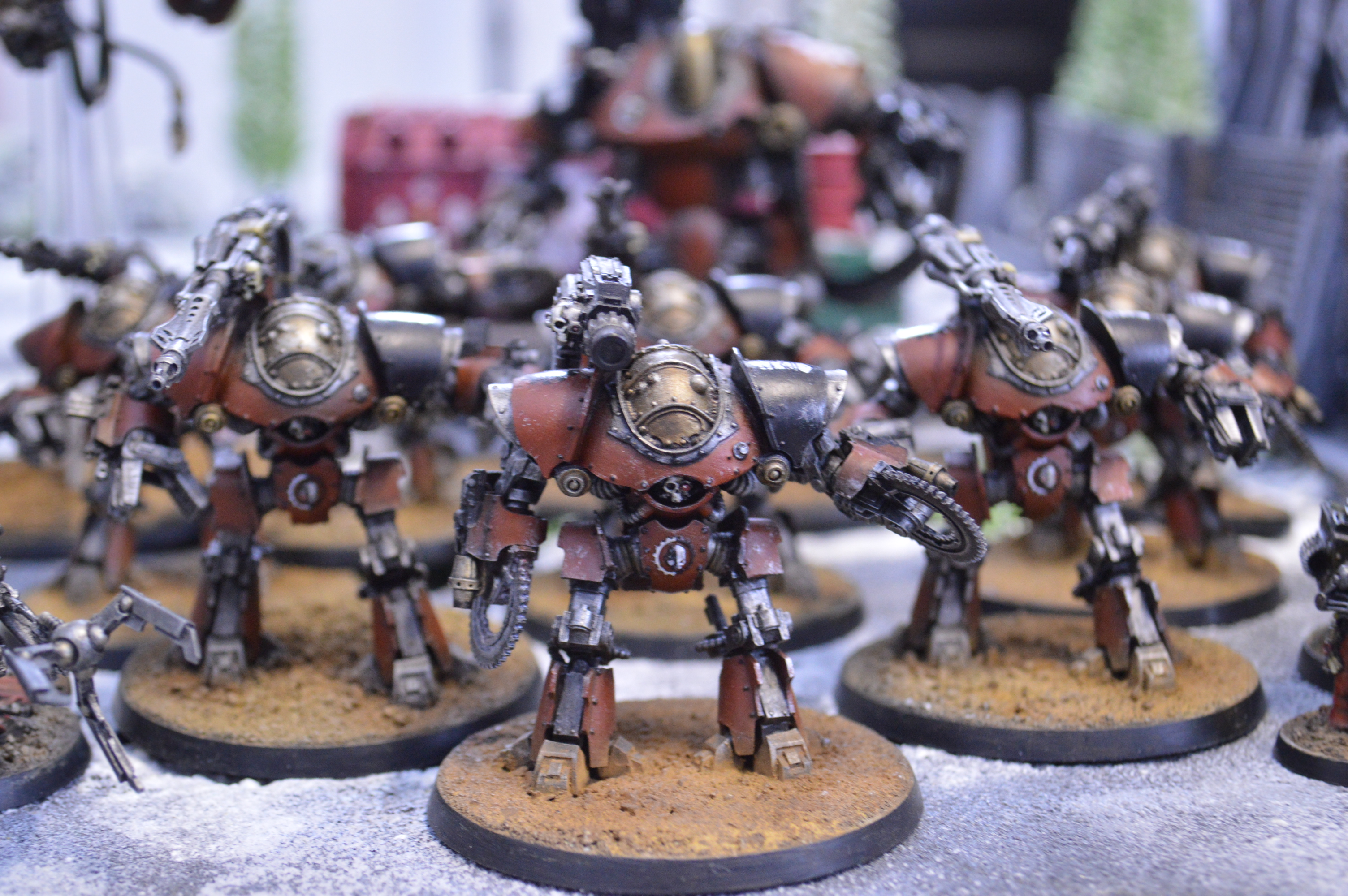 After after a good break and a awesome trip to Warhammer fest here is our 2nd ever 30k battle report. Enjoy!

Kappa-Rho-47221 settled into an ungainly squat with an angry hiss of hydraulics. It’s armoured ammunition and power feed compartments scissored open to allow the various techpriests and their servitor thralls access to its systems to hasten its rearmament and repairs so it could return to battle. It’s crimson hull clicked and pinged as it cooled after being subjected to a sustained plasma fusillade. The automata’s bellicose machine spirit blurted it’s desire to rejoin the fray in machine cant via the noosphere. Several lesser menials flinched as the aggressive binary coding burned through their synaptic nets. The Red Priests doubled their efforts. Tracked and many-limbed heavy servitors manhandled leaden ammo crates into position along the Thallax’s back. Snaking energy lines linked it to a portable, armoured plasma reactor mounted on a rail macro-conveyer which served as one of twelve resupply points in the developing battle. Kappa-Rho-47221 downloaded terabytes of raw data regarding the unfolding battle. Enemy dispositions, heavy weapon emplacements, kill zones, strongpoints, numbers, ammo expenditure, expected and actual artillery saturation. All near worthless. The IV Legion knew their craft well. Their defence was a shifting, amorphous one that utterly confounded the Mechanicum’s empirical approach to warfare. Units rotated their position frequently, heavy weapons and artillery relocated, strong points were abandoned and used as bait for the Mechanicum to expose themselves in assault only to find themselves under withering enfilading fire and bracketed by preternaturally accurate artillery bombardment. The so-called Iron Warriors were living up to their name and reputation this day. < [March. With Me.]> The noospheric command set Kappa-Rho-47221s tortured synapses aflame with their power, every binary digit laced with sacred command protocols that it couldn’t ignore. The Thanatar raised itself to its towering full height, umbilical auxiliaries and loading gantries falling from its massive frame as it marched at the Archmagos’ command without so much as a seconds hesitation. The earth thundered at it’s cohorts tread. Tracer fire licked out from the refinery, all attempts at camouflage abandoned by Perturabo’s erstwhile sons. The Mechanicum’s major offensive would need the entirety of their firepower to stop them, if stop them they could.

Iron Warriors: Loyalist
Rite of War: Pride of the Legion

Wow what a sight! Back again at the studio doing what we do best after an epic first No Retreat Horus Heresy event. What better way than to have our second Horus Heresy Battle Report with legend David Braines from The 30k channel. So with both players ready to go and the team setting up this glorious table let’s get a better look at the scenery.

An epic Imperial statue guarding the factory compound (obviously of a member of the Emperors Children in experimental armour ;)), amazing the attention to detail the team has put in for this one. With both players using their No Retreat lists this is bound to be amazing. No night fighting is rolled and deployment will be hammer and anvil creating a great sight as one of the forces will be approaching the factory from beyond the forest and factory fence outskirts.

Great painted GW scenery creating an epic environment for the battle and going very well with the whole factory scenario. Both players roll off to see who grabs first turn…… and it’s Steven who wins the first roll of the game opting to deploy on the factory side and opting to go first. Hold on to your hats this is going to be a good one!

Steven deploys his toughest units first making some good use of the crates in front for some line of sight blocking. These have to be one of the most amazing models in the HH range they look amazing! The two terminator squads deploy on either side of the colossal robots and warlord. Remember no deep-striking terminator rules with the standard units in Horus Heresy making it very tactical for Steven to use. Steven? Tactics? Oh dear! 😉

The Medusa squadron deploys as close to the deployment edge as possible, these babies hit hard with their S10 Ap2 Large blasts but they have a short range so sadly Steven has to risk it and put them out of cover to get some hits on the opening turns.

The Havocs make good use of the tall factory buildings and with the use of their long ranged Autocannons they will be a key unit in the battle.

David starts to deploy, placing his Thanatars in key positions, ready to barrage the enemy. Scoria deploys just in front, as close to the fence as possible and attaches himself to one of the Castellax Maniples. Important Note: Due to the lack of an official Scoria model (*nudge wink nudge* Forgeworld please) David will be using an Archmagos to represent Scoria.

The rest of his army deploys further behind, his second Castellax unit, keeping in mind their Darkfire Cannons 60″ range.

David attempts to seize the initiative, and luckily for Steven, fails to do so with the roll of a 3. Time to get this show on the road!

Turn 1 (Iron Warriors) Steven moves up towards the enemy, taking advantage of the terrain before him for some extra cover. Steven hopes to get as many of these units into combat as soon as possible….especially that Iron Circle.

Turn 1 (Iron Warriors) With all the movement done Steven opts to run these units. As said previously, it is crucial that these units see combat as quickly as possible, trying to play to the Mechanicums weakness.

Turn 1 (Iron Warriors) The Havocs take aim. With a ballistic skill of 5 and two strength 7 shots per marine, this unit is bound to hit hard. They fire at the closest Thanatar, re-rolling ones due to Kyr Vhalens warlord trait. They manage to wound the tough mechanical beast a total of seven times, alas, David starts off strong and passes all of his 2+ saves.

Turn 1 (Iron Warriors) The Medusas are next to take aim. Firing at the Castellax unit in front of them. They manage to hit and wound the unit 3 times.

Turn 1 (Iron Warriors) More impressive rolling from David sees all 3 survive thanks to their 5++.

Turn 1 (Mechanicum) Without as strong a start as Steven might have hoped for, David begins his movement phase. Scoria and the Castellax unit move forth towards the Iron Circle. Scoria and his unit fire upon the Iron Circle and Kyr Vhalen. A combination of high toughness and awesome saving rolls by Steven, makes for an almost untouched unit, unluckily for Steven, a single wound gets through. Iron within! Go Steven!

Scoria and his unit fire upon the Iron Circle and Kyr Vhalen. A combination of high toughness and awesome saving rolls by Steven, makes for an almost untouched unit, unluckily for Steven, a single wound gets through. Iron within! Go Steven!

Turn 1 (Mechanicum) One of the Thanatars fires its Hellex Plasma Mortar in an attempt to melt the Medusa squadron to a puddle. The blast scatters off meaning that only one hit is scored. Managing to penetrate, a low roll results in a crew shaken result. This is still a major impact, as that Medusa will not be able to fire any blasts next turn.

Turn 1 (Mechanicum) Davids second Thanatar fires upon the Iron circle. Scoring a direct hit, David manages to wound all three but thanks to their 4++ re-rollable, thanks to being in base to base, Steven saves them all.

Order your Official SN Dice and Custom Wooden box now! [email protected] or message us on Facebook for more info

Turn 1 (Mechanicum) David tries to use Scoria’s Rite of the Dread Castigation and fails. Steven must be feeling lucky here as this would have done some serious damage to the Iron Circle, removing a wound for every point David beats him by in a D6 + leadership roll off.

Turn 2 (Iron Warriors) The first of three Veteran squads outflank using the marksman tactics. This is bound to give David a headache. AWESOME SIGHT!

Turn 2 (Iron Warriors) The second unit outflanks on the same side, just meters away. For those of you who don’t know what the Marksman upgrade does, it gives the Veteran unit Sniper and Outflank. Love it! This is my favourite veteran tactic. Do you guys prefer any of the others?

Turn 2 (Iron Warriors) Hoping for a 6″ charge, Steven positions the Iron Circle as close as he can and even foregoes their shooting in order to increase his chances.

Turn 2 (Iron Warriors) The Terminators follow closely behind, also hoping to get to combat this turn, needing a more generous 10″.

Turn 2 (Iron Warriors) As planned, Stevens first Veteran unit do their job as David removes his first Thanatar from play. A big hit from the Iron Warriors.

Turn 2 (Iron Warriors) The Iron Warriors make the charge! D3 strength 7 Hammer of Wrath hits from each of the Iron Circle models! These things hit hard! Hell yeah! Let’s see what these bad boys can do!