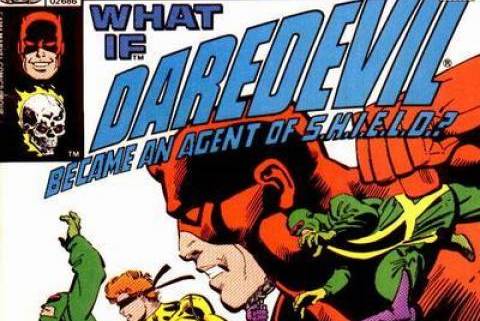 Thor and Daredevil join the fight, and we get a look at the new boosters with Scott Porter!

Marvel’s “What if?” series places characters in odd, sometimes outlandish, situations just to see how they – and those around them – will handle it. These stories  don’t affect continuity. Heroes and villains do things and have abilities that they wouldn’t normally have; and they team up with organizations that their main storyline wouldn’t support. Llike Daredevil joining S.H.E.I.LD. in 1981…

This version is a 60-point piece, with six clicks of life, and a range of six squares with one target. He also carries Improved Movement: Ignores Hindering Terrain, making Daredevil, Agent of S.H.I.E.L.D. a great choice to use on maps with a lot of stealth opportunities. He fits in naturally on both S.H.I.E.L.D. and Spy themed teams, and can make use of the S.H.I.E.L.D. team ability.

Coming in at 105 points with the Asgardian and Mystical keywords, this Thor means to stay close to his captors and do their bidding with long-range attacks.  He has the Flight symbol and a range value of 7. He switches from a starting slot of Running Shot to Sidestep for his middle dial and finishes with Running Shot again.  His mobility options overlap with his attack power options with Pulse Wave and Penetrating/Psychic Blast.  Defensively, he starts with a click of Invinciblefollowed by Invulnerability to reduce damage and finishes with three clicks of Energy Shield/Deflection to keep himself from being sniped too easily.

Scott has been opening booster packs from the set – take a look!