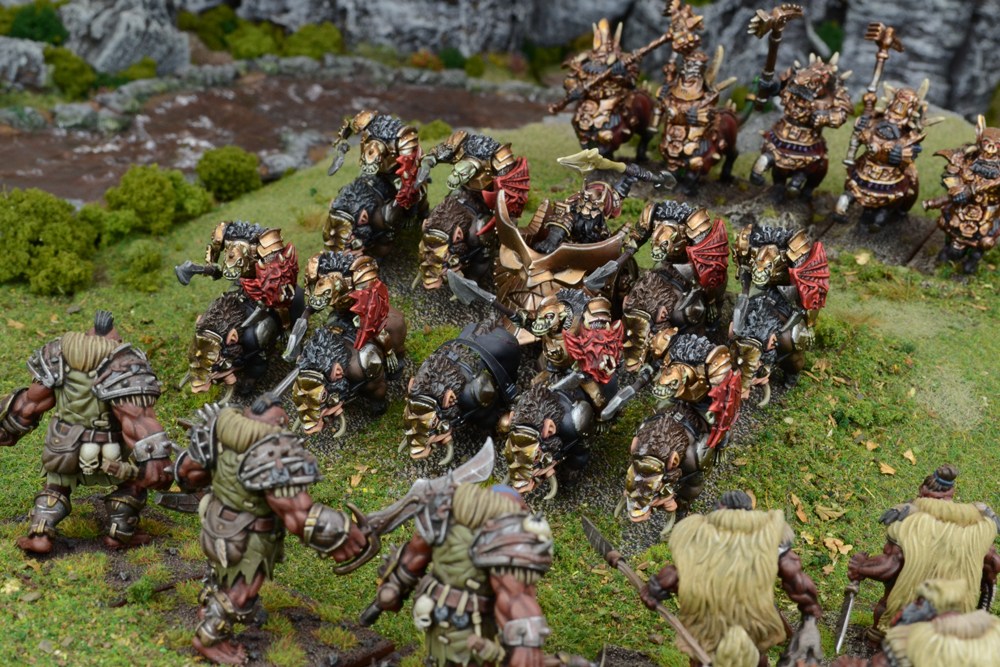 Kings of War is launching a summer campaign along side their new Edge of the Abyss Campaign Supplement – come see the details!

Summer is coming… yesterday the Edge of the Abyss summer campaign supplement went up for pre-order on the Mantic website and is also available to order from your local game store. The book will be released on July 24th, while the campaign will last from August 19th until September 30th. Stores and clubs will be able to participate and each will get their own mini hub to track the battles of their members… so you can have ultimate bragging rights in your community. With the release fast approaching, we sat down with Rob, the editor of the summer campaign supplement to find out more about people can expect in the book.

Why did Mantic want to create a summer campaign for Kings of War?

It’s something that’s been talked about for a while, in fact I believe it was mentioned during the last Kings of War Kickstarter. However, it’s a massively time consuming project and it never got off the ground previously. So, last year we sat down with Beasts of War who have loads of experience running global campaigns to find out what was possible and that got the ball rolling. Although the Kings of War tournament scene has really exploded over the past 18 months, we wanted to make sure the focus wasn’t always on tournaments and a global campaign is a great way to galvanise the community. This is something we’ve seen with the International Campaign Day, when hundreds of players from all the world get together to battle it out.

It’s a great reason to finally finish that army (or start, for that matter) you’ve had on your hobby desk for a few months. I’ve been wanting to paint a Dwarf army for years and this provided me with a great excuse to tell the other half. ‘Oh well, it’s for the summer campaign!’ What’s the story behind the summer campaign?

We always knew that it had to be something surrounding the Abyss. In Mantica that is the most obvious threats and it’s always waxing and waning. When it’s more powerful, the forces of Evil grow in strength but when it’s weaker, the powers of Good can take the advantage. In the Edge of the Abyss, it’s more powerful than ever, after the Abyssals unleash its dreadful power.

Originally, we had the Basileans as the antagonists against the Abyssals but that felt a little restrictive. Their view of right and wrong is so black or white, that they may feel more uncomfortable siding with the likes of Ogres or even the Varangur. Instead we decided that the Abyss would pose a terrible threat to nature itself. As it grows, the Abyss is ripping up the very earth of Mantica and swallowing it into its fiery depths – anything that gets in its way will be devoured. So, instead of Basileans we decided that the Green Lady and the Forces of Nature would be more likely to lead the charge. After all, they’re a neutral faction who are more willing to work with others when it suits them.

With that in mind, the Green Lady sends out her messengers to rally the forces of Good, so they can hold back the tide of Abyssals swarming across the land. However, as you’ll see in the book, it’s often an uneasy alliance.

Alongside the main story, you’ve also got some smaller strands that spin off into their own mini stores, like the Goblins attacking Galahir or the Kingdoms of Men being forced to build a great wall to keep out marauders. In the future, these smaller hints could be turned into their own stories or potentially even a new campaign. Will the map of Mantica change after the campaign?

Absolutely! Depending upon whether good or evil win in certain areas (neutral armies are considered good for the sake of the campaign) the map will change accordingly and a brand new map of Mantica will appear in the Kings of War sourcebook later this year. There are some potentially very large changes to the map  planned and some more subtle ones in different locations.

We think this is a really great way to engage the Kings of War community because their battles will have a lasting effect on Mantica for years to come. In the supplement the different locations that will potentially be changed are introduced with a short story that explains their tactical importance and what will happen if good or evil wins.

This is YOUR chance to genuinely shape the face of Mantica and it’s a really exciting prospect.

Are there new heroes in the Edge of the Abyss supplement?

Yes, most definitely! Something we were really keen to do with the campaign was create the next generation of characters to appear in Kings of War. Personally, I think something that’s been missing from Kings of War at the moment are those really iconic characters that you care for and want to learn more about. Of course, there are some like the Green Lady that really stick out, but we wanted to expand on that. In the supplement there are 14 new Living Legends and each is introduced with a brief story about what they’re doing before the campaign kicks off. We’ve tried to pack a lot into these little stories. Players can get a sense of the character so that when they’re using them on the tabletop, they’ll know what sort of character they are. The Rules Committee has also done a fantastic job of tying the back story into the rules too, i.e. Eckter (the Placoderm Defender) is battling against a rampaging Kraken in his story and in the rules, he’s armed with a special ability called the Krakenmaw. It’s a really great example of the story and rules working together to create something special.

Are there new units in the Edge of the Abyss supplement?

Yes! The heroes have their own associated units who they may have battled alongside before, for example. These units use existing miniatures and people can choose if they want to include them in their armies. Again, the Rules Committee did a really great job of coming up with units that matched the stories of the new heroes. A good example of this are ‘Grogger’s Goons’, a group a deranged goblins that follow Grogger Split-tooth around because they’re convinced he’ll become the next Goblin King.

What will happen to these heroes and units after the summer campaign?

One thing we’re really keen to do with Kings of War is keep the story moving or focus on new characters. Throughout the campaign we’ll be tracking how each faction is doing and based on that we’ll see what will happen to the different heroes. If, for example, the Goblins win the majority of their battles then Grogger will live on and potentially become king. If the Goblins lose the majority of their battles, however, Grogger could be killed off or return as a far more vengeful character. Also, it’s probably the worst kept secret ever that at the moment we’re working on Kings of War skirmish rules for a game that’s called currently called Kings of War Vanguard. Because Vanguard focuses on the individuals, rather than large troops, it’s a great opportunity to bring the summer campaign characters back and look at them in more detail. So if you’ve got a favourite in the supplement, make sure you help them to win all their battles so they can live on!

We’ve seen that formations have been talked about previously, can you explain those?

Sure, this was something that came about when we were talking about wanting to see those epic Kings of War battles with hundreds of miniatures on the tabletop. This got us thinking about potential combos of units that work particularly well together and in order to encourage people to take more core troops in their armies, we decided to give particular combos a stat boost.

The Rules Committee has worked exceptionally hard on these formations and the results are really exciting! It’s a different style of army list building for Kings of War and the summer campaign supplement is a great way to experiment with elements like this. At the moment, we’ve only got formations for 14 of the armies but the Rules Committee is looking at creating more for the remaining factions. They are, of course, totally optional but they’re a really fun introduction into Kings of War and we hope that people enjoy adding them to their armies.

The Edge of the Abyss campaign supplement is available to order now from the Mantic website or your local game store. Plus, make sure you check out the new resin heroes that will be heading your way in July!