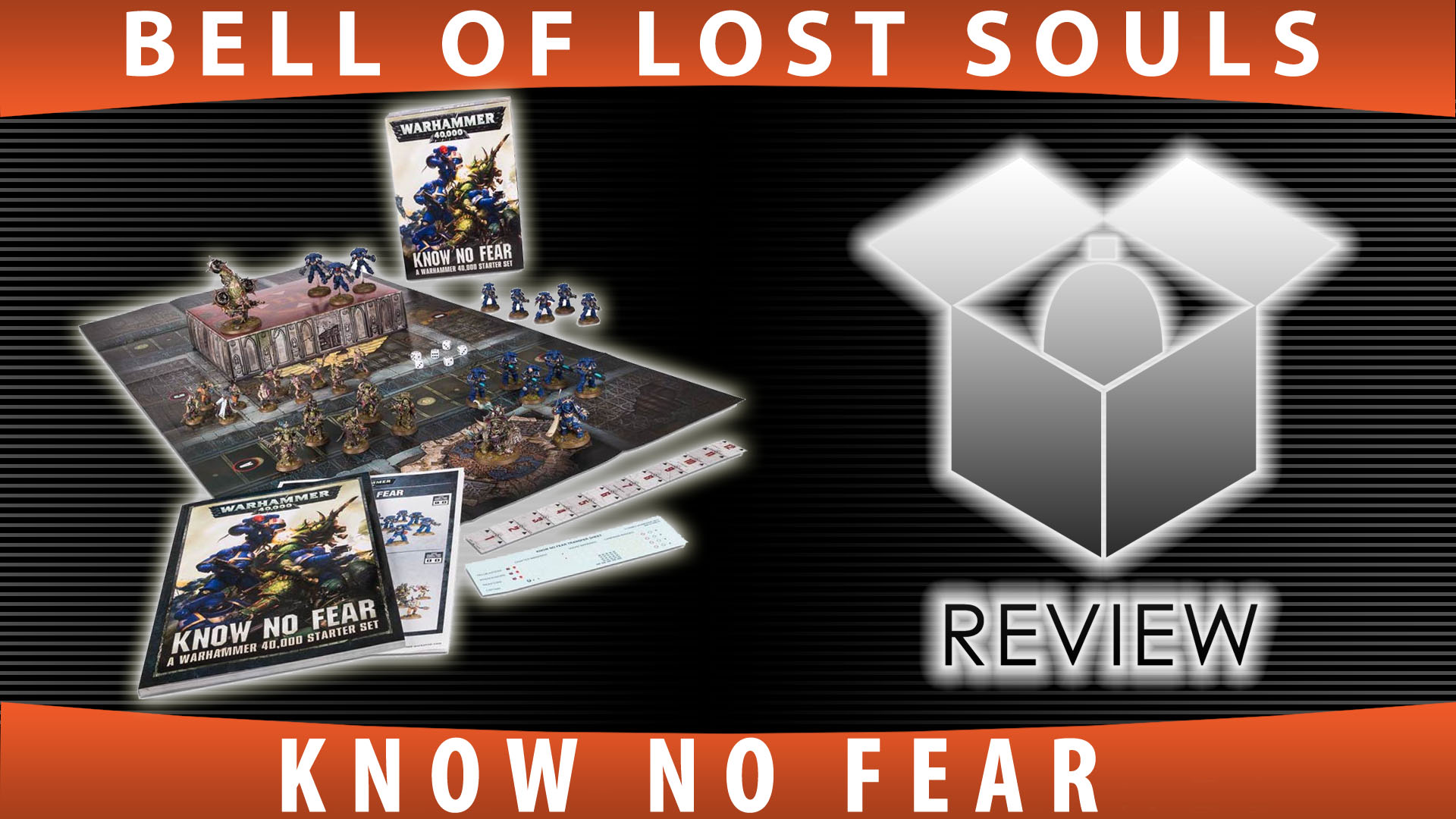 Know no Fear is an excellent starter set for Warhammer 40K. Come take a look inside.

Howdy folks, today we’ve got a look inside the new Know No Fear boxed set. It comes with everything you see featured above–which is everything you need to get started playing the game. If you have ever wanted to just dive right in, this box has got you covered. But it’s also got a treat for veteran collectors as well–it’s got some new sculpts of your favorite minis, and a battle mat you can throw down in a pinch.

You get 5 sprues of miniatures in this box, including a variety of Primaris Marines and Death Guard. You get a Lord of Contagion, a Captain in Gravis Armor, Poxwalkers, Hellblasters, Plague Marines–a sizable fighting force for two players. That’s the real draw here. You can put together a decent-sized game straight out of the box, and you get minis, a map, and even a bit of terrain (in the form of that bunker, a clever repurposing of packaging).

And if you’ve never played a game of 40K in your life, then the Know No Fear booklet has everything you need to start wading in. There’s a ton of lore, hobby tips, a mission from the core game, AND a 6-mission “tutorial” that takes you from a few skirmishes which teach basic concepts like measuring, moving, and firing, and gradually builds towards incorporating things like fire support and tactical positioning. And each of the missions comes with its own objective. The Marines player will have a slight advantage early on, but the Death Guard force is surprisingly resilient once you get all the pieces in play.

Anyway, you can find more info about the set below, and order yours today! 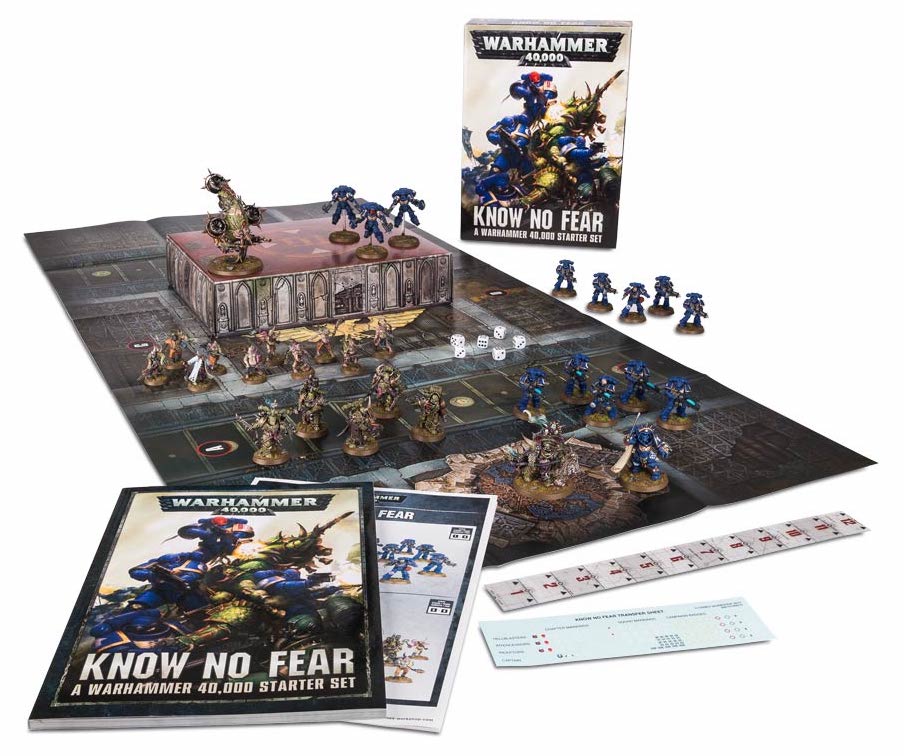 Containing 31 Primaris Space Marines and Death Guard miniatures, Know No Fear is a fantastic starting point for the newcomer to the Warhammer 40,000 hobby – an exciting fusion of collecting, painting and playing with highly detailed Citadel miniatures. Contained within this fully-packed box is everything needed to take you through the process of learning to play games of Warhammer 40,000 – miniatures, rulebooks, scenery, a gaming mat, right down to the dice and rulers:

31 detailed plastic Citadel miniatures from the Primaris Space Marines and Death Guard range, in blue and green plastic, ready for you to assemble:

Mighty warriors and fearless protectors of humanity, equipped with the greatest weapons and armour the Imperium can provide, the Space Marines are heroes one and all.

The Death Guard trudge inexorably into battle amidst the drone of endless swarms of flies. Bloated, rotten and riddled with disease, these revolting traitors are virtually immune to pain. 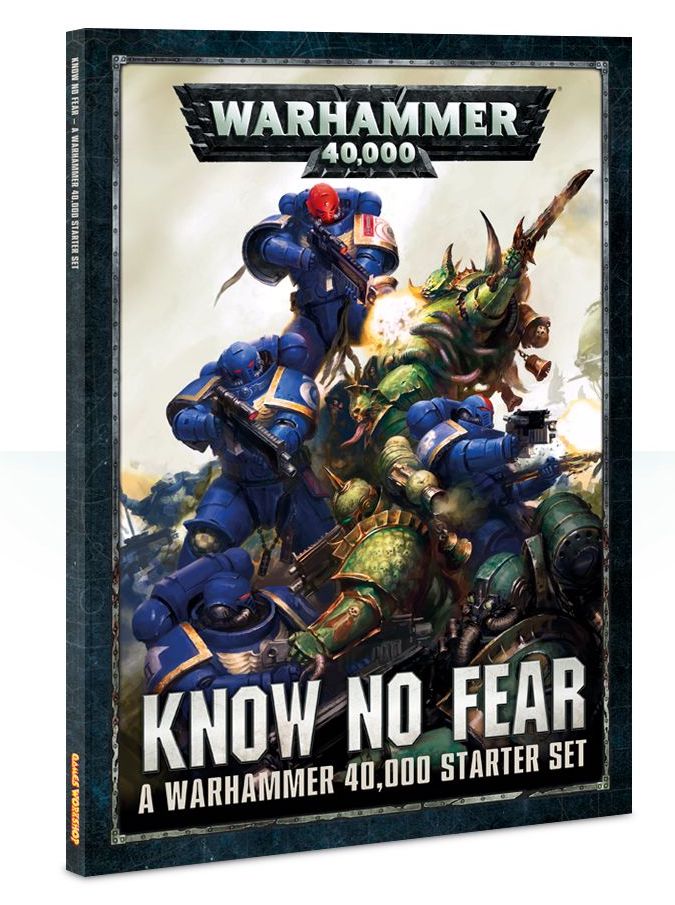 Everything you need to learn to play Warhammer 40,000 going with your new miniatures is included in the box, including a 96-page book featuring:

– an introduction to the Warhammer 40,000 hobby – collecting, building, painting and playing with Citadel miniatures;
– a guide to the state of the galaxy in Warhammer 40,000 – the Imperium of Man, the forces of Chaos, the Xenos threat and their terrible intertwinings;
– an overview of the heroic Primaris Space Marines, with a focus on Captains, Intercessors, Inceptors and Hellblasters;
– an overview of the Death Guard, with a focus on the Lords of Contagion, Plague Marines, Foetid Bloat-Drones and Poxwalkers;
– background information setting up the epic conflict between the Ultramarines and Death Guard in the Ultramar system – the home of the Ultramarines;
– a step-by-step painting guide, beginning with a guide to the fundamentals – the brushes and paints to choose – and giving you the tips and techniques needed to paint the miniatures included in the box;
– a ‘start playing’ guide – this is split into 6 missions, each of which introduces more miniatures and more advanced concepts into the flow of the game, taking you from a basic fight between a couple of models to full-blown combat between all 31 included in the box! The missions are designed to be intuitive, and the new player is encouraged to add rules at their own pace;
– a set of core rules – these are the fundamental rules for playing Warhammer 40,000, split into easy to follow phases with a mission designed to ease you in;
– datasheets for every miniature – these are handy cards containing the rules for each model in the box; – a 4’ x 4’ double-sided gaming mat – one side is specially designed with icons showing you where to place miniatures in order to play the 6 missions included in the book, and the other has no markings, so you can play your own games. Each side is printed in full colour with an evocative design of a ruined Imperial city;
– a scenery piece! The inside tray of the box is designed to look like a sealed Imperial bunker, meaning it can be placed on your mat as a piece of scenery for your miniatures to battle over;
– 6 6-sided dice, and a 12” translucent measuring ruler, each vitally important for measuring movement and other in game tasks;
– a decal sheet for your Ultramarines, featuring army and troop iconography;
– 15 32mm, 10 25mm, 4 40mm, 1 50mm and 1 60mm round plastic bases for your miniatures to stand upon, with 3 45mm plastic flying stems for the Inceptor Squad.

And if you’d never heard of this product before, now you know you no longer know no know no fear.