Today the creator of the Boise Cup gets into the nitty gritty and showcases the highs and lows of the first GT of 8th edition.

Welcome gamers, it is I Captain A with a tale of the first GT of 8th. You’ve heard about it on other sites, but now it is time for the creator and co-host of this event to get down into the nitty gritty and showcase the highs and lows of the Boise Cup, the first GT of 8th edition. 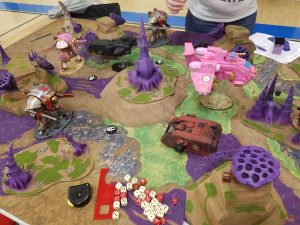 Having previously run the Guardian Cup in Portland, OR for a few years, and countless one day RTT’s, I knew I had the experience to pull of a new event here in the Gem State. I had just moved to Boise last year in August, and had no place to lay my 40k head. Fortunately, some ground work had been done beforehand to prep the scene for my arrival.

A friend and ex-teammate Dr. Insanatron had already moved to Boise and started to work on the competitive scene, running into some fine fellows. One of them, who would become my co-host, Matt, had started playing with Ben regularly and had caught the tournament bug. They had been playing at ABU Games, a great game store in Boise, and when I went there I knew it would be a great place to hold tournaments and especially a GT. We met with the manager in October and started up a weekly league, ran some tournaments and finally got the green light to run a GT at the store. If we pulled it off, it would be the biggest 40k event the store had ever run. 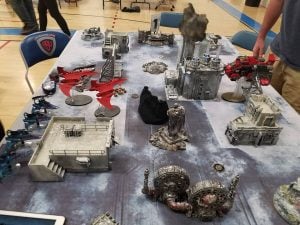 ABU is not your average game store. It is actually one of the larger online retailers of Magic the Gathering. They have done so well that they bought a used fitness center to use as a store front and warehouse. One of the things they have kept bare for use is a full size basketball court. I saw that space and I was in love! At the Guardian Cup it was great as the space there was very cool to game in, being located in a bar, but it was also very cramped. As soon as I saw that pristine large space I knew it would be perfect. 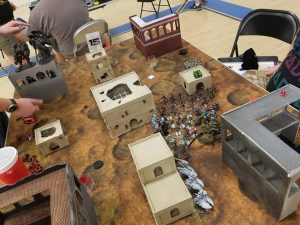 Having run many events, some large, and also having been to many large events, a picture began to form in my mind about what I wanted the GT to look like. It may seem quirky, but I really wanted this to run as smoothly as possible in all aspects of the event. Here were my goals. 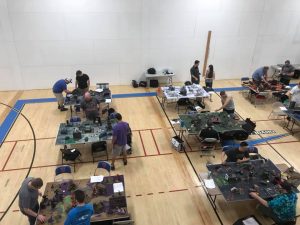 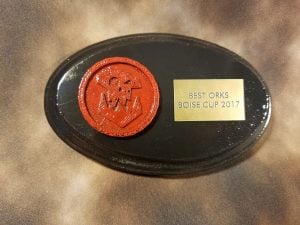 BCP was pretty great as always. They even sent us some items to give away. We did have internet, but the hotspot was laggy and no one had the main internet password for us to use. I was lucky I had a hotspot on my phone as that saved our bacon. That was one of the more frustrating part of the event as a lot of people had issues putting in their scores over the weekend. Make sure your internet is solid! 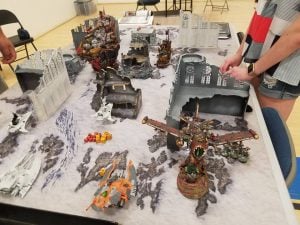 By the by, be sure to check into the BCP Subscription service. If you go to events and have seen the value of BCP, please support this endeavor. They are helping events all over and not just for 40k! The service by and large is free so I hope you will join me, the #1 subscriber, in supporting their work. With it you get access to every roster uploaded into the system and also get coupons to use at select retailers. Other features are coming so go check it out. Its only $5 a month or $50 a year so it isn’t that much to support a great gaming aide for our community. As a TO, it has been so valuable and has freed up a ton of time for FLG to do the other things they do for us like stream 40k batreps! 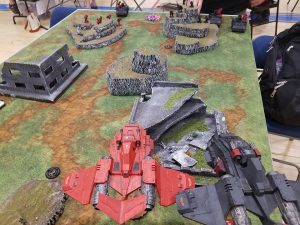 I’m sure you’ve heard about some of the struggles we had, in particular the lists at the event. Even though many of us had access since late May, the real rules and indexes hadn’t been released until a week prior to the event. I knew there was a chance that we would have list errors, but to be honest I didn’t think it would have been so numerous. List errors started popping up on the first day. Most were very minor, a detachment error, a few points over, misappropriated wargear, but there were some larger ones. Matt and I decided to handle them as they came up and swap scores if need be or at the very least make the list legal even if stuff had to be removed to do so.

I don’t feel anyone was malicious in their list building intent and at least one player has asked for their score to be removed from the ITC database. What was funny is that many lists just needed a swap of detachments around and worked and functioned just as they did before. With this being the first big event of 8th and one week after its release, we felt a hard stance and auto banning people was not the best choice as we didn’t feel the list errors contributed much to the win/loss of the players involved. We did hand check certain lists day two to make sure they were legit and fixed errors before we started, but even we missed some minor errors.  I’ve been trying to think about ways to circumvent this without checking each list personally as I know I will still make mistakes in the checking process as I don’t play every army. 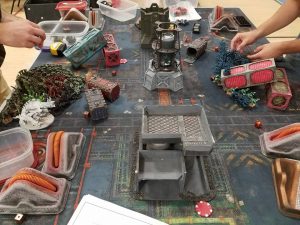 By the end though, we had caught most of the mistakes and the games on day two were by and large error free. We changed what we could in BCP, but some of them slipped through and the errorred lists were kept on BCP for all to see and hence some of the internet rage.

Some things I noticed:

I felt the prizes were great as we raffled off over $1000 in 40k kits and had some great and unique faction trophies. We also had 4 bolt pistols for the top placers such as Top General, Sports, Paint, and Overall. They were a lot of work, but I enjoyed the uniqueness of the items and with a retail value of $100-150, felt they were a good prize. 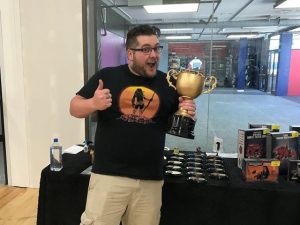 I know other events do large amounts for top placers, but I have seen time and time again the salt and drama that accompanies that. I choose the raffle system as I am looking for ways to reward many different players in different ways.

Overall, I felt we met most of our goals for the Boise Cup. I put a ton of work into the tables and was proud of how they looked and worked. With 8th, we saw a ton of issues with how terrain works and tried our best to borrow and create terrain that would work in an 8th environment. We instituted some house rules with windows (no shooting through windows in the bottom floor and you could shoot into windows on the top floor but not completely through a piece of terrain). The goal was to create more LOS terrain which is pivotal in 8th. Without it you will have large spammy lists of long range high damage shots that just tear through other lists. Even though it wasn’t perfect I was pretty happy for our first event. We hope to do even more next year and a lot of people were stepping up to say they would love to lend terrain. I’m thinking a table design award is in order. 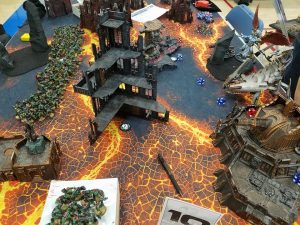 What I learned is that tables in 8th should strive for:

We plan to grow slowly next year, probably only adding 5 tables. I would love this to become a Major for the ITC, but I don’t want to rush another 10-15 tables to make it work. I’d rather take a few years and keep the quality high.

So that’s it! The Boise Cup from the point of view of one of the wranglers of the event. I realize it is probably rosy in color, but I was very pleased with what we pulled off for our first big event at ABU Games and can’t wait till next time. 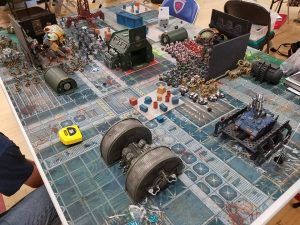 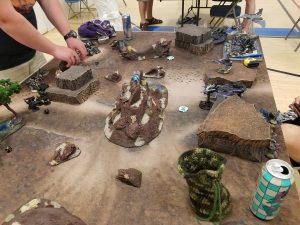 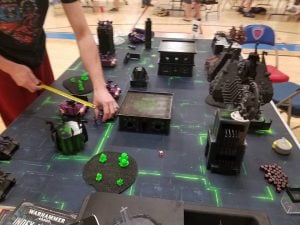