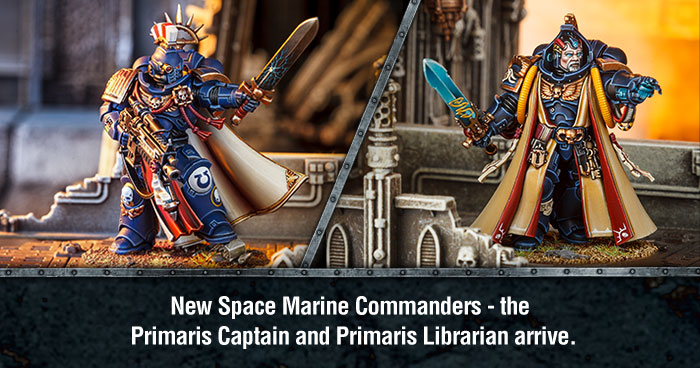 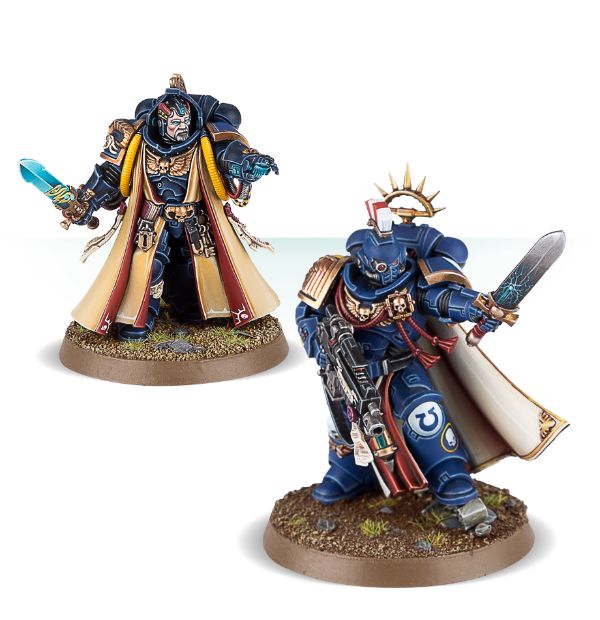 Games Workshop has two new characters out this week for the Primaris Space Marines & a new book all about Farsight! 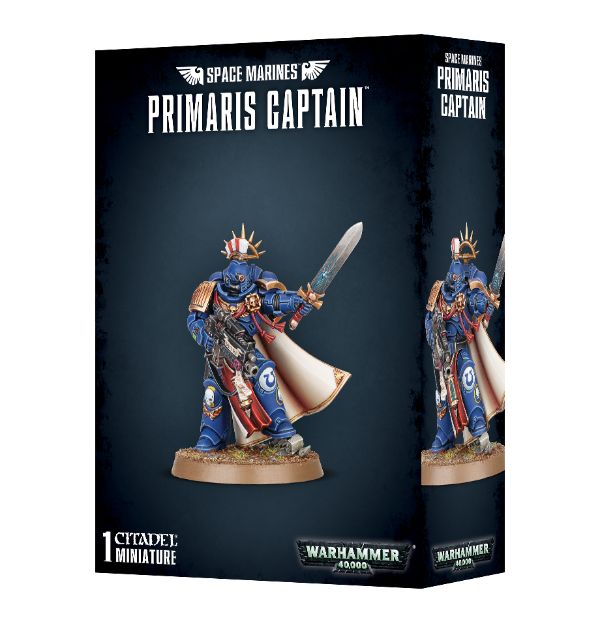 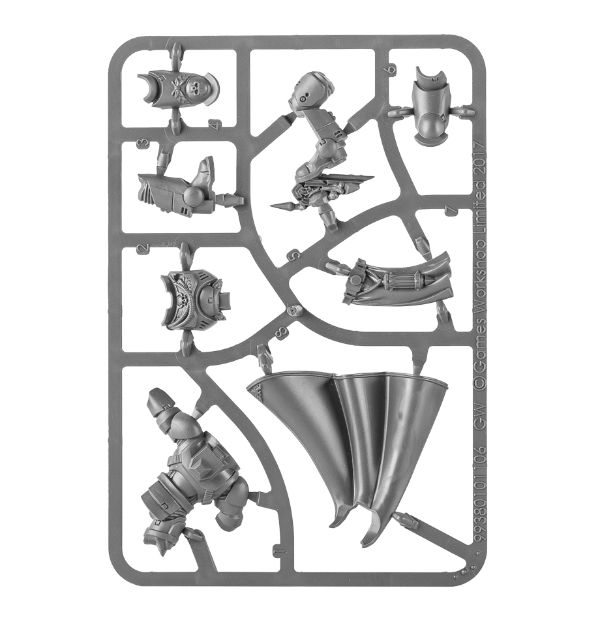 This multi-part plastic kit contains the components necessary to assemble a Primaris Captain. His Mk X Tacticus power armour is larger and more powerful than the armour of his predecessors, and he carries in his right hand a choice of master-crafted bolt rifle or master-crafted stalker pattern bolt rifle, with a box magazine and overcharger. His left hand can be modelled wielding a power sword, or pointing out the enemy for his Space Marines to obliterate. His billowing cloak sits under his backpack, above which is an impressive iron halo – adding to this detail is a sculpted Imperial eagle on the right shoulder pad, and sculpted laurels on the leg plates. There is a choice of two different heads – one bare, and the other is helmeted with a targeter over one eye – and his left shoulder pad has been left blank and smooth, meaning your preferred Chapter iconography can be easily added. 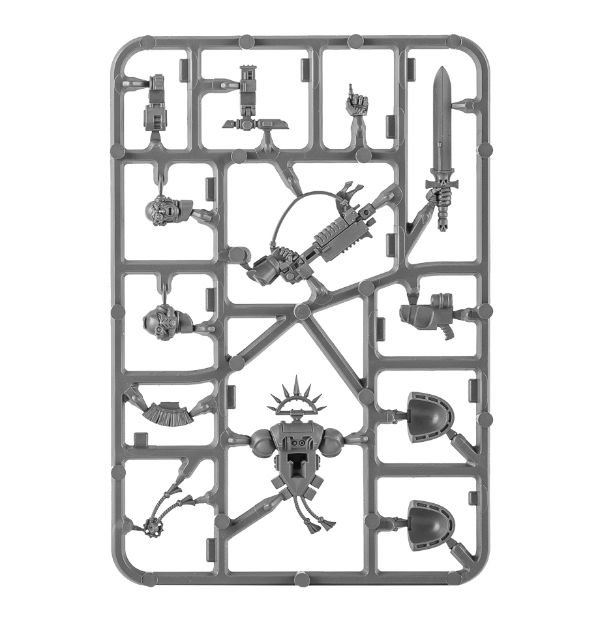 The Primaris Captain comes as 21 components, and is supplied with a Citadel 40mm Round base. The kit also includes an Ultramarines-Character Transfer Sheet, which features Captain, Chaplain, Librarian and Lieutenant iconography. 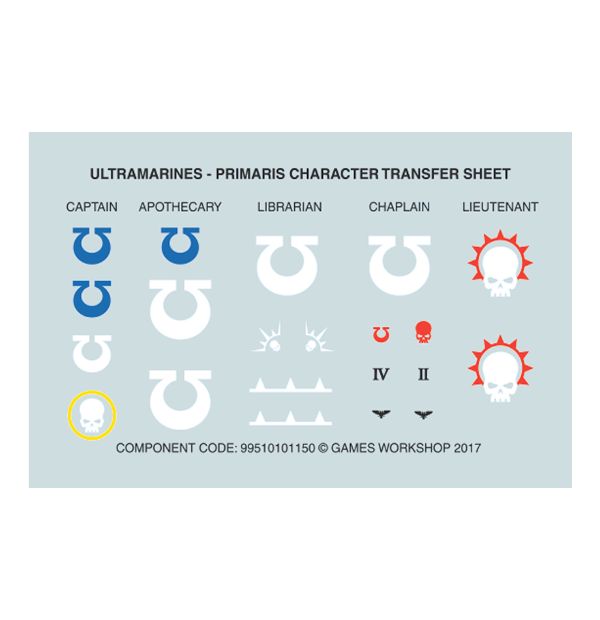 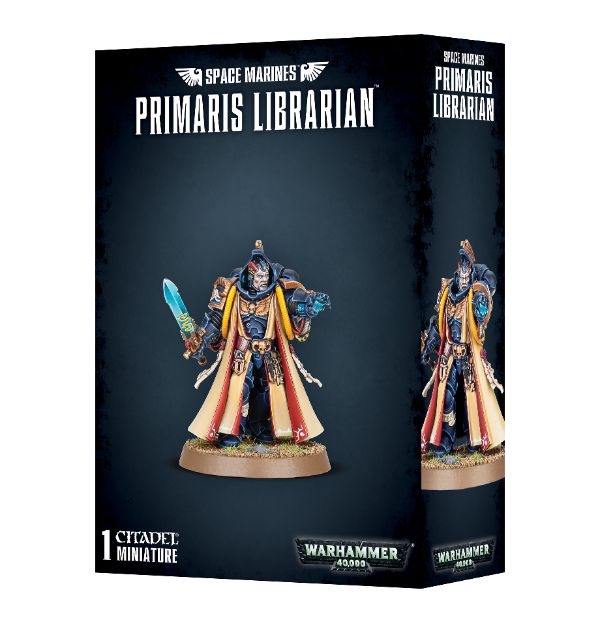 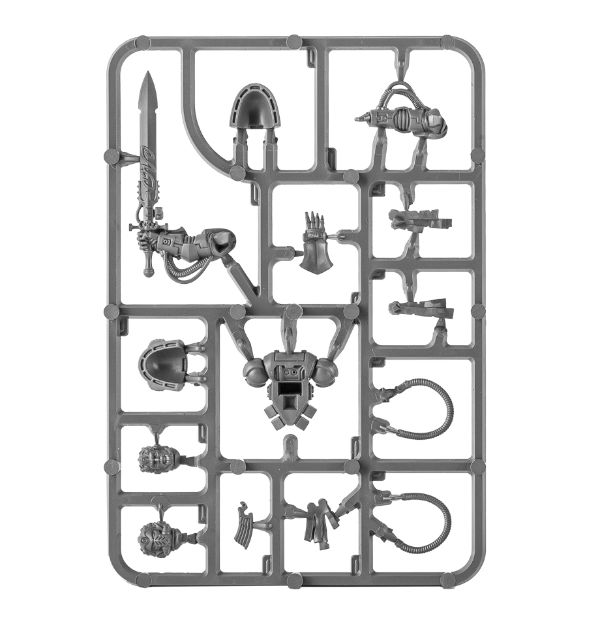 This multi-part plastic kit contains the components necessary to assemble a Primaris Librarian. Clad in Mk X power armour, his accoutrements are many and elaborate, from his ornate multi-layered cloak to the detailed wiring going into his psychic hood. He comes armed with a force sword in his right hand, and features a holstered bolt pistol along with a whole host of interesting trinkets – a padlocked book on his belt (potentially holding some galaxy-shaking secrets…), several large keys, purity seals on his cloak and backpack and a clasp featuring an Imperial Eagle. 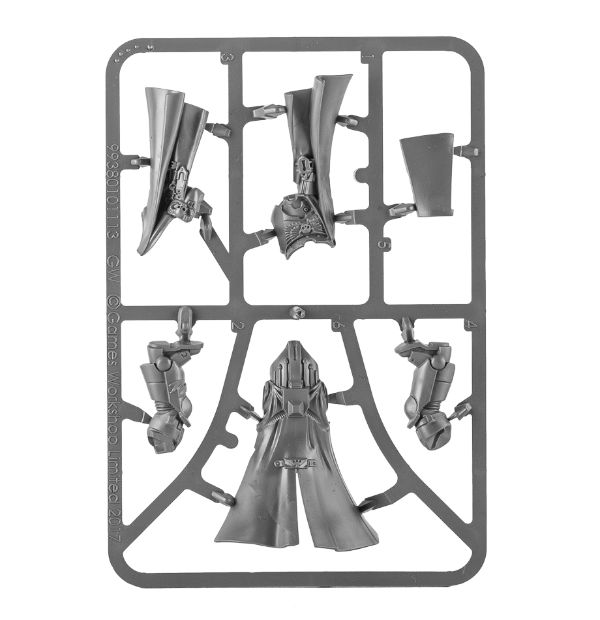 The Librarian comes with a choice of two heads – one helmeted with a psychic hood and one bare-headed, with the terminals of the psychic hood clearly visible. The right shoulder pad and belt buckle feature ram’s heads – the insignia of the Librarius – and the left shoulder pad is blank and smooth, meaning the markings of your preferred Chapter can be easily applied.

The Primaris Librarian comes as 20 components, and is supplied with a Citadel 40mm Round base. The kit also includes an Ultramarines-Character Transfer Sheet, which features Captain, Chaplain, Librarian and Lieutenant iconography. 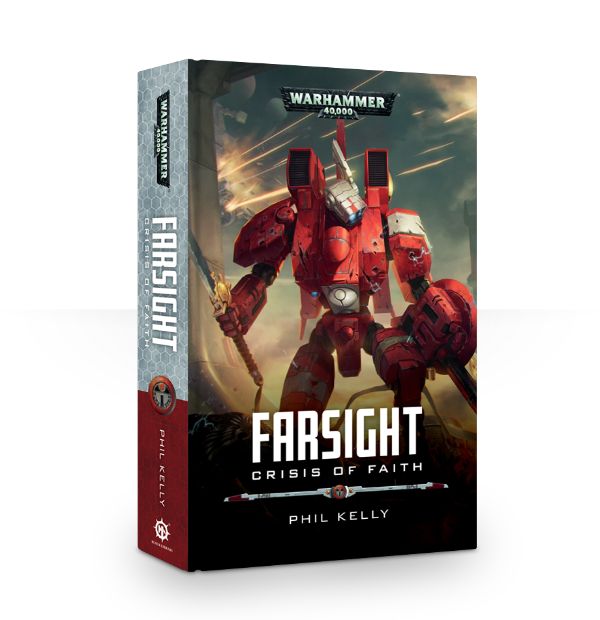 Fresh from his victory on Arkunasha, the young Commander Farsight leads a crusade to reclaim colonies lost to mankind’s Imperium. But stiff resistance will test him to his limits, and beyond.

READ IT BECAUSE
Phil Kelly continues his look at the life of Commander Farsight with his first campaign against the full might of the Imperium, and shows how the Tau Empire’s technological superiority fares against Imperial grit.

THE STORY
The tau are a mysterious alien race, diametrically opposed to the Imperium of Man in every possible way – in their mastery of technology, methods of warfare and social structure. Yet in galactic terms they are a young race, and naive when it comes to the manipulations of Chaos. When promising young Commander Farsight is promoted to lead a crusade across the Damocles Gulf to reclaim the tau’s lost colonies from mankind, the mood is one of optimism. With their mighty fleet, and superior weapons and machines, how can their endeavour possibly fail? However, despite a parade of early successes, Commander Farsight soon faces enemies he wasn’t anticipating, and finds not only his courage but also his soul tested to the very limit. 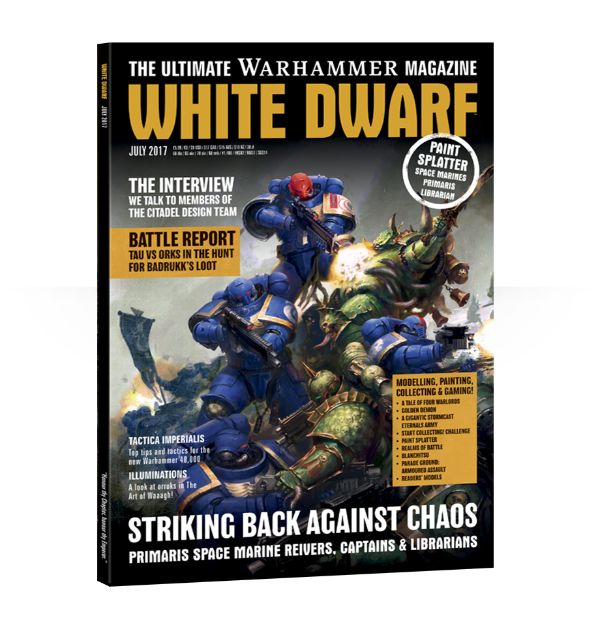 July’s White Dwarf is here and with it we delve deeper into the new Warhammer 40,000. We take a look at the two new starter sets – First Strike and Know No Fear – while for those of you already neck deep in the grim darkness of the far future, we’ve got Tactica Imperialis, where we look at the myriad strategic and tactical possibilities for your armies in the new Warhammer 40,000 (with some top tips from the games designers themselves). On top of that, we’ve got an in-depth painting guide to the new Primaris Librarian in Paint Splatter, plus a look at getting your Ultramarines and Death Guard ready for battle in no time. Elsewhere, in Creating Legends we speak to six members of the Citadel Miniatures Design Team about designing Citadel miniatures – it really is a must-read interview! On top of all that, we’ve got James Karch’s vast Stormcast Eternals army, Dan Harden and his Orks take on Matt Holland’s Tau in this month’s Battle Report, A Tale of Four Warlords continues and the warlords play their first games of the new Warhammer 40,000, we’ve got more from Golden Demon: The Horus Heresy, we delve into Warhammer Skirmish, look at painting gaming tables in Realms of Battle, Blanchitsu, and much, much more besides. Pick up a copy now.

That’s all from GW this week – Have at it folks.