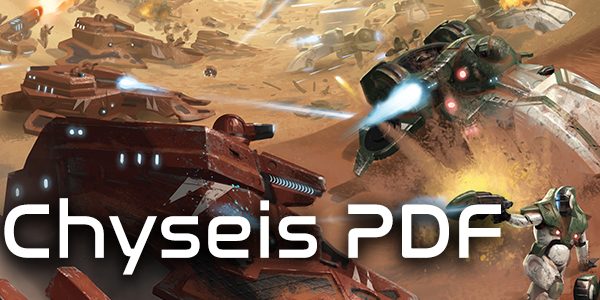 Delve into the latest campaign book to take you Beyond the Gates of Antares. In the Chryseis Shard campaign the fighting is represented by six new narrative style scenarios, six key battles leading to the discovery of the artificial intelligence core called the Locus. Our story takes us to that final confrontation, leaving the fate of the Locus and the course of Antarean space for you to resolve…

The Chryseis Shard – The Ascent of the Locus – describes events taking place in Antarean space since the destruction of the planet Xilos as portrayed in the first Antares supplement The Battle for Xilos. At the conclusion of that adventure, the discovery of an unborn Builder Gate and its subsequent escape from stasis consumed the planet Xilos and unleashed a new and terrifying power into the Antarean nexus.

The following forces all take part in the narrative:

As some may recall, gamers all over the world were invited to play out the Xilos campaign and contribute their own results to our Xilos campaign website. As well as recording results for the rival factions, many players were generous enough to share pictures of their games as well as descriptions of their battles and forces. The storyline in this second supplement follows on from those events. The role of the competing factions and surviving characters have been drawn from the broad campaign results. Not only did we weave the threads of our tale from the outcome of the previous campaign, but we have also taken characters created by one of our participants and given them a role in our new story. Prince Batu Delhren and Commander Baray Tsulmari, are characters created by Tim Bancroft that form part of his own Freeborn force. The pair are also the principle actors in Tim’s fiction series, as part of our forthcoming range of novels and short story’s set in the Antarean universe. So, thank you, Tim, for your generosity in allowing us to realise your creations in miniature, and thank you, everyone, who took part in our first online campaign. This supplement is designed so that players can make use of the content in various ways, depending on how they wish to approach things, how much time they have to play, and how many players are participating.

Full Campaign. You can play out the entire campaign of six battles using the forces described. Each side’s total score gives it an individual success rating. The score accumulated by the Locus gives a bonus level in the final game, making the Locus easier or harder to defeat.

Modified Campaign. You can also play out the entire campaign of six battles using any forces chosen to an appropriate points value as indicated for each game. You might also reduce the number of battles by just playing the ones that appeal to you.

Narrative Scenarios. You can play any of the six individual scenarios in this book using any forces you wish in the same way as the narrative scenarios already included in the Beyond the Gates of Antares rulebook. Individual scenarios can be played over and over again, with different forces every time if you want. Notes are also included suggesting further variations to try out.

Army List Entries. This book contains additions for existing army lists that either extend existing entries or add new ones. Although introduced here for the first time, these new entries form part of the relevant army lists and can be used in any Antares games. Your Free PDF army lists will be up dated soon!

Chryseian Armoury. An introduction to new weaponry and new equipment including a selection of vehicles as well as new squad types for Algoryn and Isorians.

Hazardous Environments. A selection of new rules for fighting in hazardous environments.

Alternate titles for this supplement include: ‘A Chryseis of Faith’ and ‘Come on down it’s truck month, enjoy 25 percent off  a new Chryseis, no money down!