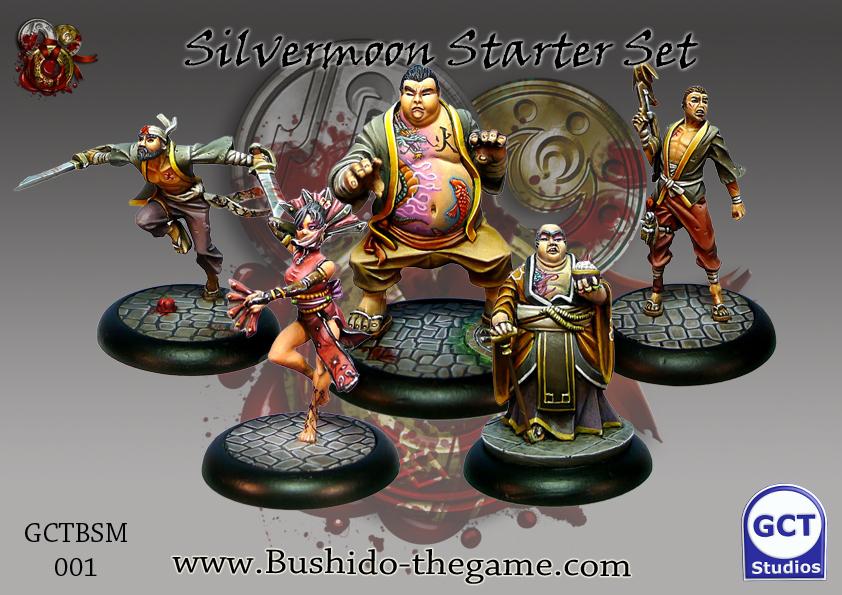 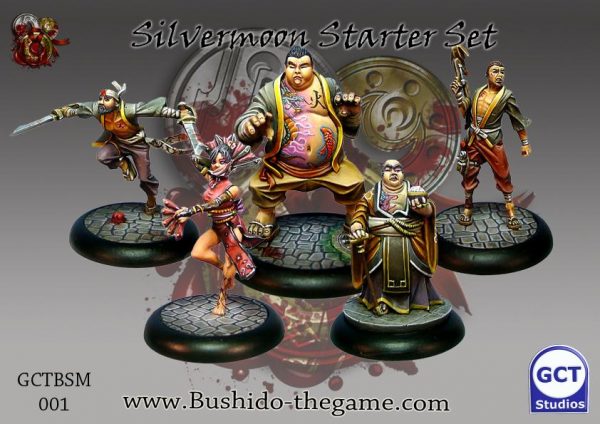 Today the  “legitimate” businessman of the Silvermoon Syndicate are under the microscope. 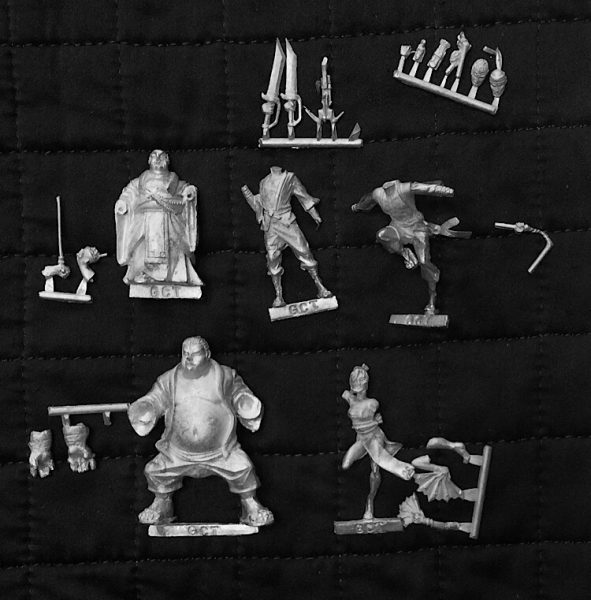 Like most Bushido starters, the Silvermoon Syndicate starter comes with five models. 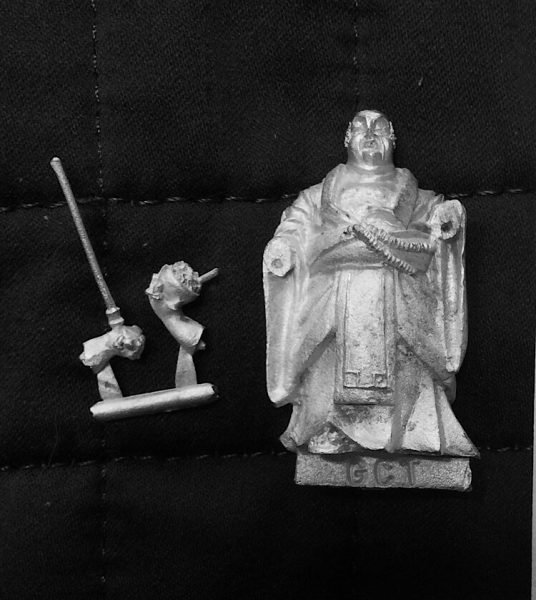 Harukichi is an influential oyabun within the Silvermoon. He’s a relatively poor fighter with some interesting abilities. He’s also one of my favorite models in the range. I mean yeah samurai are cool and all, but there’s something about this guy with his bowl of noodles… The fact that he almost looks bored to be here makes him seem somehow more intimidating than the rest of them. 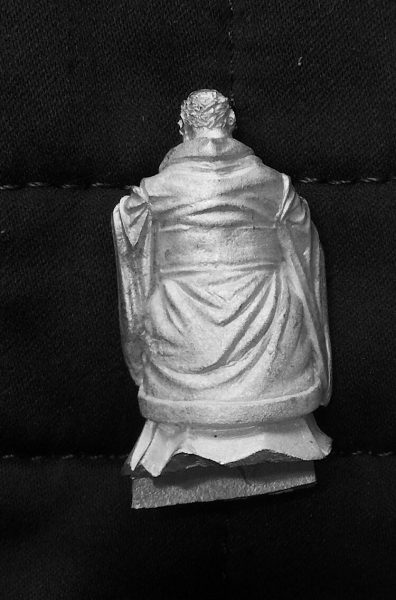 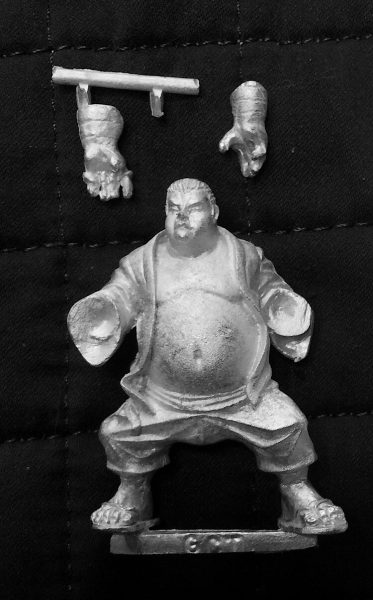 Manu is one of the Buto: a race of oversized humanoids. He doesn’t need weapons to hit hard. 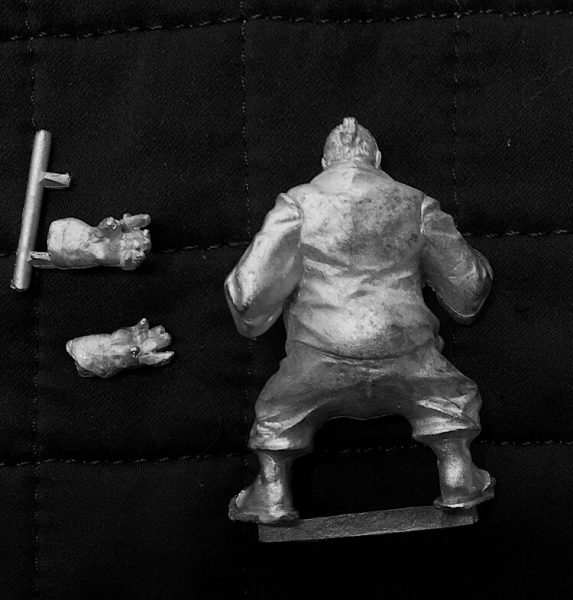 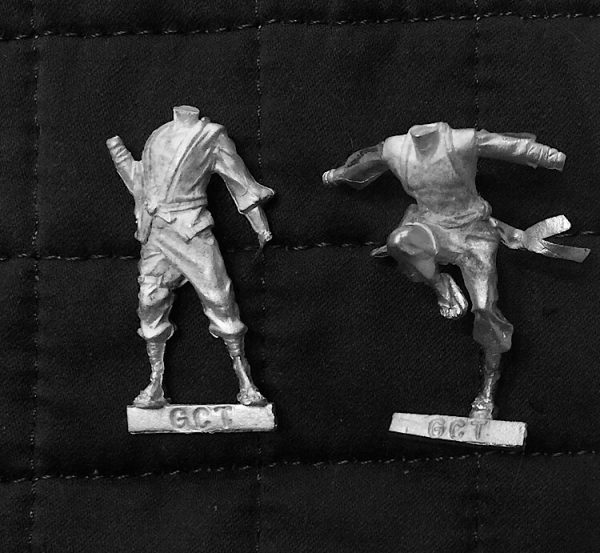 Wasupu and Senpu are low level muscle. Senpu is the only model in the set I have any gripes about. His ankle is very thin, so you’ll need to be careful not to snap it. 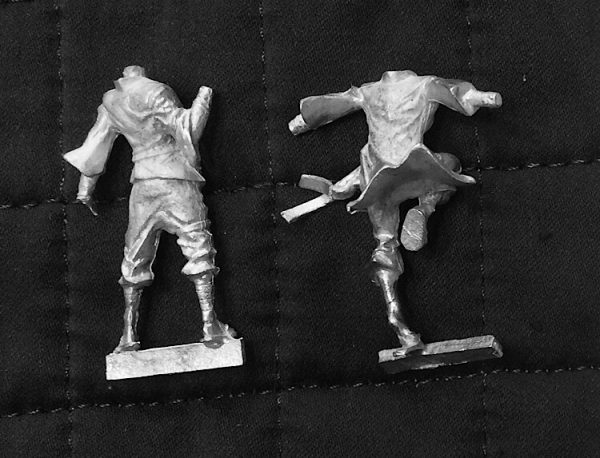 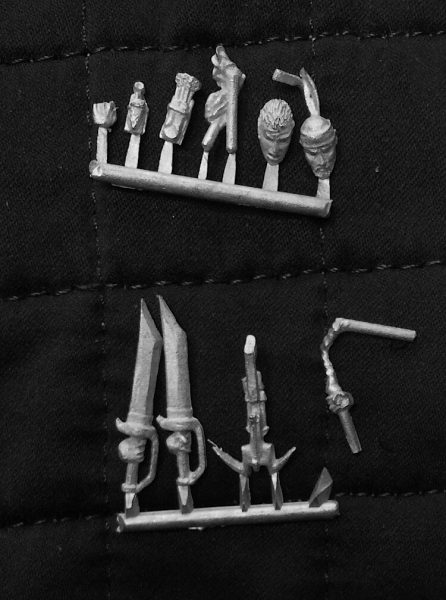 Wasupu and Senpu are provided with these sprues to give you multiple weapon load outs. More on this later. 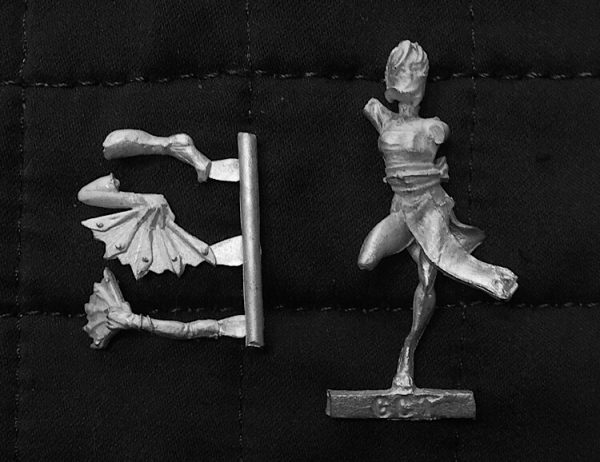 Last up we have Tsubaki: one of the infamous roses of the Silvermoon.

Now let’s talk a little more about what the models do. You can find all the cards at this link, and here are the rules if you want to check those out. 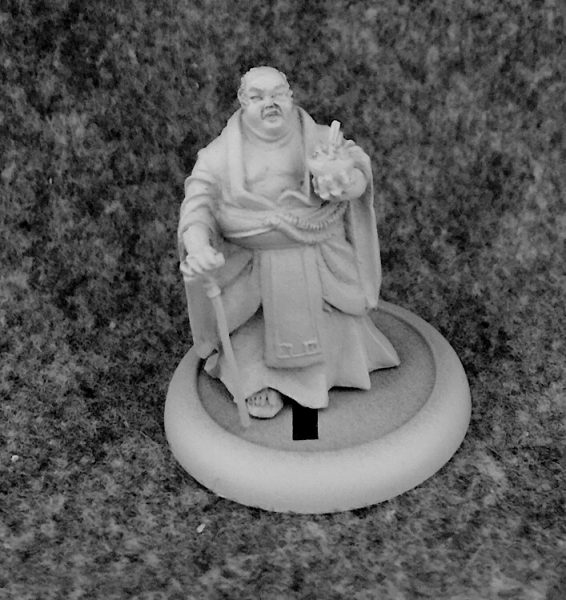 Harukichi offers some pretty potent abilities for his 8 point cost. Tactician is a great one, giving you an extra dice for that all important tactical roll. Leadership 6 will help keep your models from freaking out and Iron Mind makes it much harder for Harukichi to fail opposed Ki Tests.

Harukichi’s other talents involve manipulating dice. Cheat Fate is great, but expensive to use in a faction with very little Leech or Transfer. I prefer Fortune’s favor. You can activate it and then spend Ki as “1 insurance.” Of course if you’re worried about Ki you can always risk using his coin toss ability to try to double it. I rarely do since I’d prefer too little Ki to none at all. But… if things are looking bad you can risk it and if you get lucky that might be enough to get you winning again.

I’m still not 100% sure if Harukichi is worth the points, but he’s been pretty useful in starter games I’ve played with him. On the other hand I haven’t tried swapping him out for other 8 point models to see if they play any better. 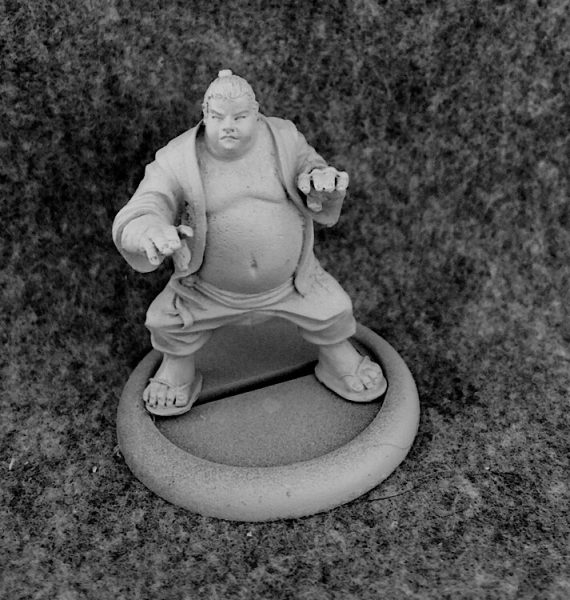 Manu is a great hard hitter and a difficult model to kill. In some cases it might be better to play him defensively. His throw defense can be used to get enemy models out of zones and maybe deny your opponent some VPs. Throwing a model will also make it prone and easier to kill. He also has Fear. It’s always a great ability to have – even if his Fear value is a bit low at 3. The rest of his abilities are a bit more situational, but it’s great to have them if the situation arises. Manu is always a solid choice. 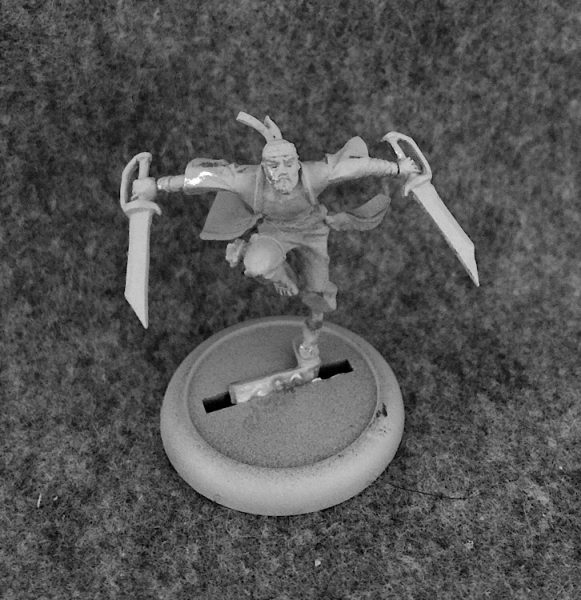 Senpu seems a bit costly for 6. His most helpful ability is probably Force Back Attack. It doesn’t do any damage, but like Manu’s Throw Attack it can help you claim zones. His ability to gain Combo Attack could also help you dish out some damage. Unfortunately I’ve found that Combo Attack with no bonus to damage can be pretty unreliable.

Like many of the models in Bushido starter sets, Senpu is a named version of a generic model type; in this case a Kyoaku Han. I personally think he’s better used as a generic Kyoaku Han. Technically this means he should be assembled with the Nunchucks (Nunchaku if you prefer) from the sprue I showed earlier. While the Kyoaku Han card doesn’t come with the set, it can be found free at the Bushido website. I haven’t even bothered to print one out. I just have it saved on my phone.

A Kyoaku Han is only 4 points and loses Senpu’s fancy abilities but gains Dirty Fighting. While I can see myself using Dirty Fighting in a few rare instances, I think I’d prefer to spend the Ki on a melee boost. This would give him a melee skill of 4 – very impressive on such an inexpensive model.

It’s also important to point out that the Silvermoon Starter adds up to more than 35 points (the standard lowest size for a game of Bushido) if you field Senpu as himself. Take him as a 4 point Kyoaku Han though and you get 34. Personally I prefer to play under rather than over. 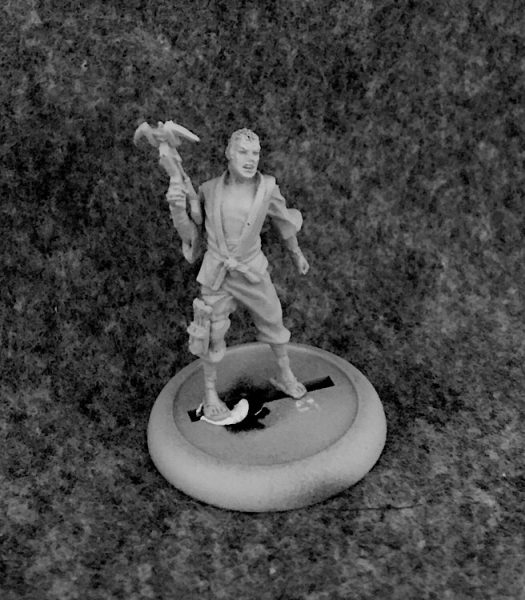 Wasupu can also be taken as a generic model: the Kyoaku Han Crossbowman. Both versions have a good ranged attack. They can move and shoot – albeit with the usual penalty. They don’t even have to reload. The downside is they run out of ammo, but 4 is all I’ve ever needed. If you absolutely must keep shooting, they can exhaust themselves to get all their ammo back.

Unlike Senpu I think Wasupu is always best taken as Wasupu. Strafe and Vital Strike are definitely worth the extra point over a generic Kyoaku Han Crossbowman. Wasupu has performed consistently well for me, but I haven’t had the misfortune of fielding him against a list with any really hard counters to shooting. 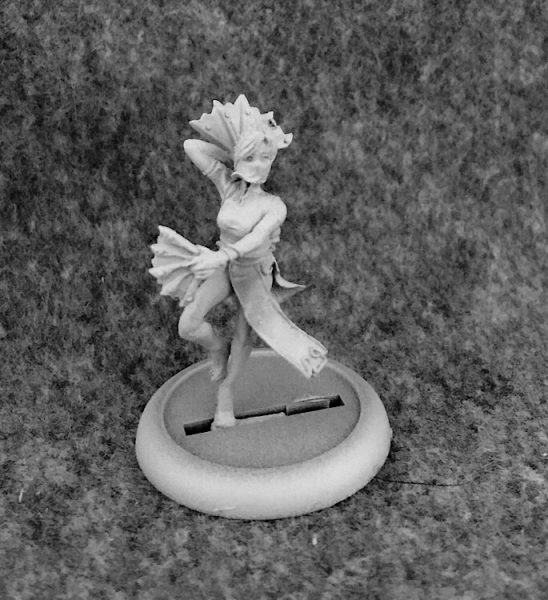 Tsubaki’s ranged attack can win you a game all on it’s own – as long as you don’t accidentally hit too many of your own models with it. Blind models can’t shoot and their melee penalty will make them easy to overwhelm in combat. Don’t waste her attack unless it’s on a good target, and you have Manu nearby to beat them down in their anguish. Because Bushido often involves fighting over small zones, it’s very likely you’ll get multiple targets. While her attack’s extremely short range can make it difficult to use, Tsubaki has the benefit of being more manueverable than most ranged attackers since she has Speed 5 and Evasive.

She can also make a great, if expensive, objective runner since she starts the game disguised. Trying to spot a disguised model can waste your opponent precious activations, so she may be able to make it across the board to an enemy objective completely unchallenged.

And on top of all that she’s not a bad fighter. She does have a -1 penalty to melee damage, but with Melee Skill 3 and Dodge (1) she can tie up much scarier opponents.

Overall this is a great starter. You don’t need to buy anything else (although having a card pack is always handy) and all the models should continue to be helpful as you expand your force. It requires a little more finesse and coordination than some others I’ve reviewed, but feels more straightforward than the Yurei or Savage Wave starter.

Senpu (or the Kyoaku Han if you run him the way I recommended) will do his best to help Manu in melee. Harukichi should be using his luck buffs to keep the pair from screwing up too badly. He can even put himself in combat if your opponent leaves an exhausted model looking vulnerable. Tsubaki can run objectives after tossing her blinding powder – or she can stay disguised if you think it’s more helpful. Wasupu will shoot whoever looks most vulnerable. Hint: everyone looks vulnerable to Wasupu since he can ignore Armor and Toughness.

Because Harukichi accounts for a good chunk of points but doesn’t really do too well in combat, this force can feel like it’s struggling. Try to focus on objectives over kills and you should do fine. You can always drop Harukichi at 35 in favor of something else, but I suspect he’ll work great at 50 where his presence can be balanced by other choices.

What to Buy Next

I expanded my force with Oda and Tatolu. You can take them as one model, but I’m fielding them individually. It costs three points more than the combined profile, but you lose out on Tatolu’s muscle if you are wasting his activations on Oda’s abilities. That still leaves one hanging point so grab one of the Silvermoon Upgrade packs. Unfortunately at the time of this writing I haven’t picked up either of them. They were sold out the last time I looked and it’s close enough to gencon that I’ll just buy them there.

For now though, this means I don’t know what gear comes in them or what bonuses and restrictions are involved with the Silvermoon Themes. I do have the generic upgrades that come in all faction card packs, so I’ve been using one of those. Other Bushido players probably won’t be shocked that it’s simply the Healing Balm card. I give it to Harukichi since he only needs the one activation to use Fortune’s Favor and he will only have the Ki to use it every other round. In the space between he can heal.

This article first appeared on my own blog TooMini. If you liked it please follow and you’ll get the chance to see all of my articles there before they show up on BoLS. There are tons of great painting articles there that I haven’t migrated to BoLS yet.

~Hope you enjoyed the article. What do you guys think of this faction?