Hot off of the Internet, have a couple of updates for the new classes currently in playtesting via Unearthed Arcana. The Mystic and the Artificer are two wholly new classes; the Mystic is a bastion of psionic power that is essentially four or five classes in one, their class features are psionic disciplines which make them play with incredible variety. You can build a mystic as a melee bruiser, a magical assassin, an elementalist, a mind/battlefield controller –they have options within options. Perhaps a little too much.

Whereas their counterpart, the Artificer revolves around creating magical devices and imbuing them with spells, and supplementing that ability with either improvised alchemy or creating a magic gun that shoots lightning and fire and the like. And while this sounds exciting, at present the abilities feel a little lackluster. The gunner archetype shoots for some decent damage, but lacks the power and versatility of the Warlock. And the alchemy option needs tweaking as well–extant spells let you mostly do what those powers do, but better. This is likely a function of not having the rest of the book around them for support.

Both of these are at present available through the Unearthed Arcana archives, and we’ve covered the Mystic and the Artificer before, so if you’d like to learn more, there are a few places to track down the full details.

But soon we’ll see some updates to these two classes. Wizards is shooting for winter at the latest, according to Jeremy Crawford. 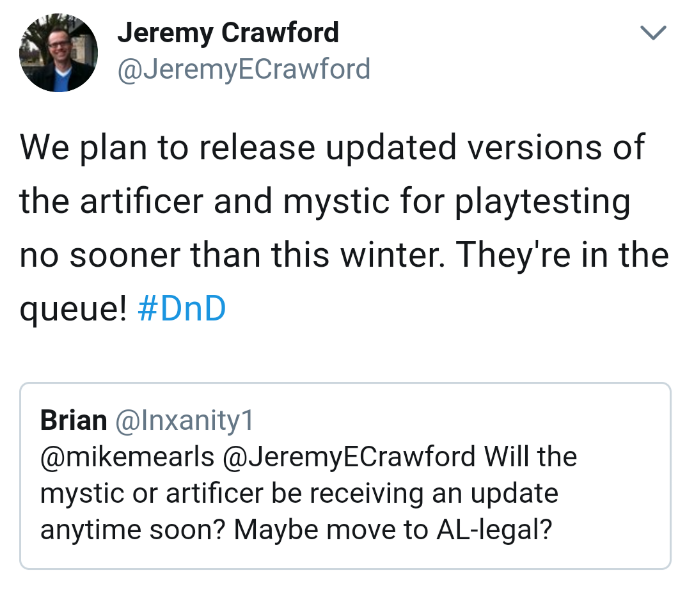 But wait, there’s more. The revised ranger, an Unearthed Arcana favorite will soon be making another appearance. 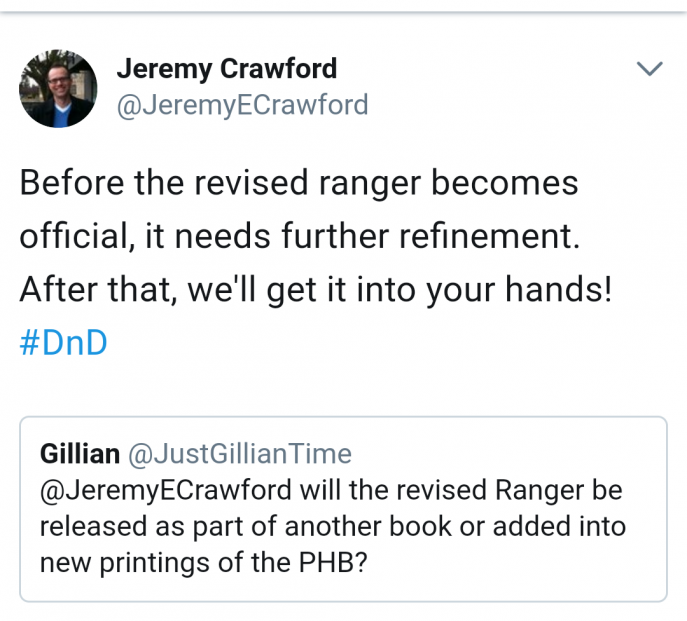 Now this does, unfortunately, mean we likely won’t be seeing any of these in the upcoming Xanathar’s Guide to Everything, but it does mean that there’s likely another book in the works that will include these options.

And on that note, here’s your chance to help shape the future of the game. Head on over to the survey linked below, it’s a survey on D&D play/purchasing habits, and is full of all sorts of interesting questions that relate to makes you might find familiar: Eberron, Dark Sun, Planescape, Krynn, Spelljammer, just to name a few. Help guide WoTC along the next leg of this adventure we call life.

Take the Dungeons and Dragons Survey

Until next time, happy adventuring.