The Ad Mech has some big friendly robots helping them out – Let’s take a look at each of the Five Questor Mechanicus Knights.

We have a copy of the Ad Mech book and we’ve been playing with it all week on our Twitch Channel. Over on the stream folks keep asking about the Questor Knights and how they work in the Ad Mech book so we figured it was a good chance to go over the 5 different options and what they each do. Let’s dive in! 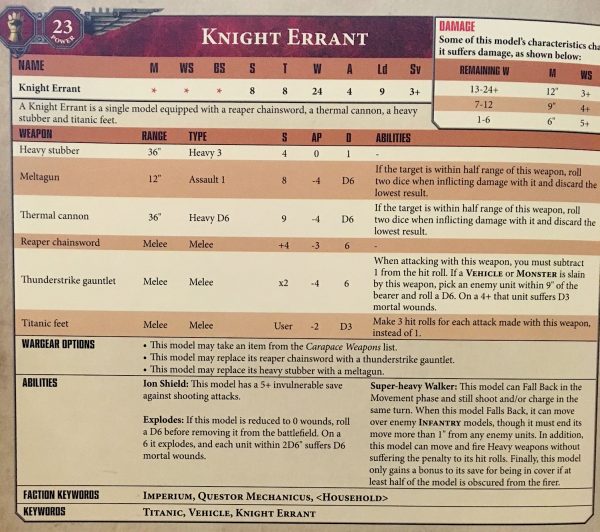 The Knight Errant is what we consider the “default” Knight – mostly because it’s first on the list and it’s 2nd cheapest of the 5 options in terms of Power Level. It comes standard with a Reaper Chainsword, a Thermal Cannon, a Heavy Stubber and it’s Titanic Feet (you know, for the river dancing).

Statwise, the Knight Errant has the baseline stats of all the Knights – in fact, all 5 Knights have the same stats across the board. The default weapon options are also repeated for many of the Knights with a few minor exceptions we’ll note below. It can also take weapons from the Carapace Weapons list which includes the following:

You can also swap out some of the basic weapons for a few of the fancier options. Each Knight also has the same Ion Shield, Explode, and Super-Heavy Walker special abilities. And when it comes to Faction Keywords and regular Keywords, they all have Imperium, Questor Mechanicus, <Household>, Titanic, Vehicle, and a Knight Varient – in this case it’s Knight Errant.

The Knight Errant’s Main Cannon is really designed to go after armor. If looking for a way to deal with opening up other vehicles, this is a good starting point. 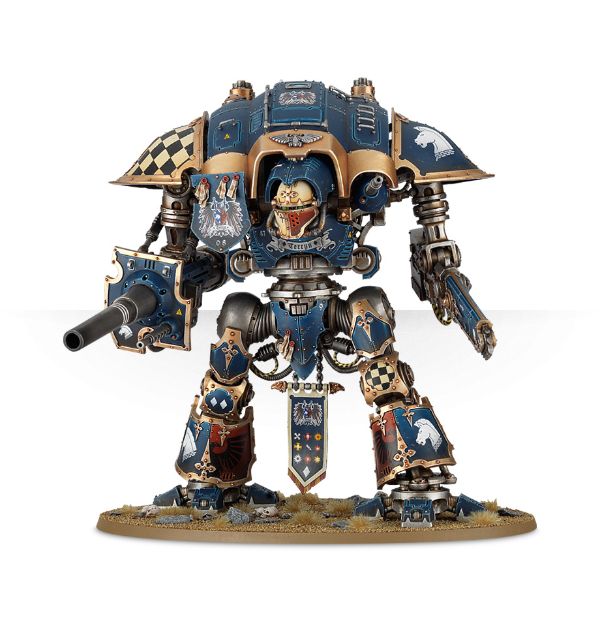 The Knight Paladin is pretty much identical to the Errant with a few exceptions. First off, it’s 24 Power Level vs 23. That one PL of difference nets you a few more weapon options. It comes standard with a Rapid-fire Battle Cannon, two Heavy Stubbers, a Reaper Chainsword and it’s magic Titan Feet.

You can swap the Reaper Chainsword for the Thunderstrike Gauntlet just like the Errant, and you can swap one Heavy Stubber for a Meltagun. It still has the same other wargear options and abilities as the Errant. As far the Keywords the only difference is that it’s a Knight Paladin vs Knight Errant.

In essence, it’s pretty much the Knight Errant with a different cannon and extra Heavy Stubber. Because of difference in main guns, we think the Knight Paladin probably makes for a good, versatile Knight option. The Rapid-fire Battle Cannon can take on most vehicles or even heavy armored Infantry. If you a good generalist we think is a good option.

Clocking in at 25 Power Level, the Knight Warden is the 2nd most expensive Knight. It’s got all the same basic stats, wargear, and abilities as the Knight Errant except for the following starting weapons: an Avenger Gatling Cannon and an additional Heavy Flamer.

It can swap out it’s Reaper Chainsword for a Thunderstrike Gauntlet as well and it still has those dancing Titan feet. You can also load it up with a Carapace weapon just like it’s Knightly Brothers.

Based on the Warden’s default main cannon, we think it’s probably best suited for unloading on hordes of Infantry – preferably the harder to kill type. Being Strength 6, AP -2 and 2 Damage means things like Plague Marines are going to hate this gun. If you need something to do some room sweeping, the Warden might be your Knight of choice. 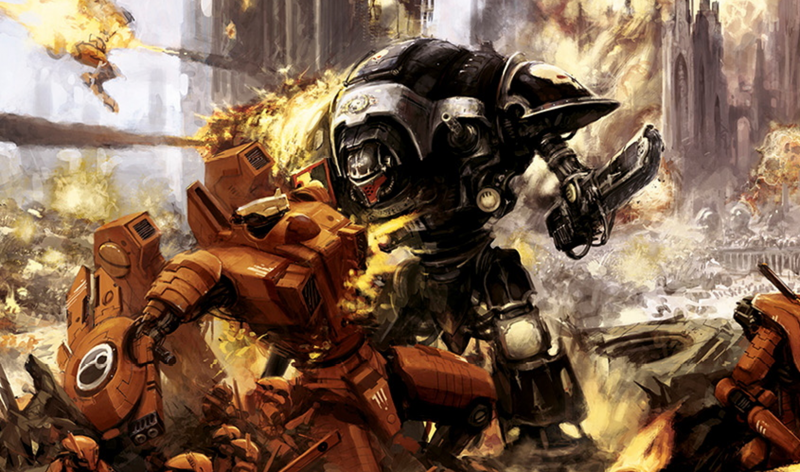 Do you want a Knight that is ready to get in close and rip the enemy apart in close combat? Well the Knight Gallant is ready for the wetwork! Armed with a Reaper Chainsword AND a Thunderstrike Gauntlet, it’s main armament is meant for one thing: getting up close and personal! The Knight Gallant does come with a Heavy Stubber and it’s dancing Titan Feet as well – but that’s not why you take this Knight…

You can’t replace it’s two arms but you can swap the stubber out for a melta. It can also take a Carapace Weapon and it’s got all the other Knight abilities and keywords – but it’s a Knight Gallant, obviously. It’s also the cheapest of the 5 Knights at a lean 21 Power Level. If you know things are cruising towards a bruising, then bring the Knight Gallant on your side! 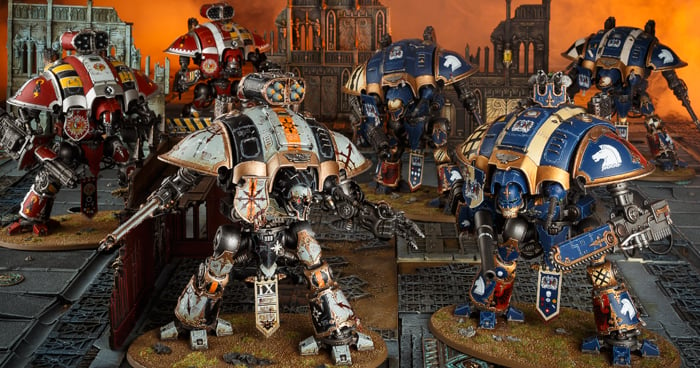 Are you more of a long range firepower type? Well the Knight Crusader trades in all of the chivalry of close combat for the ability to reach out and touch your opponents from afar. It’s default options are an Avenger Gatling Cannon, a Thermal Cannon, a Heavy Stubber, a Heavy Flamer and Titanic Feet.

Options wise, it can swap out the Thermal Cannon with a Rapid-Fire Battle Cannon and a Heavy Stubber. It can also swap out one Heavy Stubber for a Meltagun, too. And if that’s not enough it can still take a Carapace Weapon. It’s got all the same abilties and keywords as it’s Knight Brothers as well. But it’s the most expensive option clocking in at 27 Power Level – what did you expect, though? It’s got enough firepower to level pretty much anything it’s size or smaller!

Bonuses With the Ad Mech

So what’s the benefit of running a Questor Knight with the Ad Mech? Well, for starters we don’t know what Knight Houses are coming – but we have a feeling that those are going to boost Knights when they do come out. For now, the biggest (and pretty much only) benefit for running a Knight Questor with the Ad Mech are the Stratagems you’ll get access to.

Knight of the Cog – At the Start of any battle round, this stratagem grants a Questor Mechanicus unit within 12″ of an Adeptus Mechanicus Character the benefit of the Canicles of the Onmnissiah that ability until the start of the next battle round. That’s right, your Knights can get  access to those crazy boosts from Ad Mech.

Rotate Ion Shield – +1 to the invulnerable of a target Questor Mechanicus Unit until the end of the phase.

Benevolence of the Omnissiah – Grants a +5 “Save” to any and all Mortal Wounds inflicted on a target Questor Mechanicus model or Ad Mech Vehicle until the end of the phase. This one is for all those Smite Spam lists out there…It’s a 5+, but it’s better than nothing!

Machine Spirit Resurgent – Until the end of the turn, use the top row of vehicle stats regards of the actual damage on the model for a target Questor Mechanicus or Ad Mech Vehicle. If the model is reduced to 0 wounds, this effect immediately ends. – It’s basically a way for your Knights to operate at peak effectiveness until they are destroyed.

I suppose there is one more benefit to running the Ad Mech and Knights together – Master of Machines. It’s an ability that most of the Ad Mech characters have. Annoyingly, they are all slightly different – but most of them allow you to repair a wound on a Knight model. That might not seem like much, but when it’s enough to bump you up from one tier of damage, that can make a huge difference. Plus it’s adding wounds BACK to a Knight…I mean, c’mon – that’s just rough.

Ad Mech and Knights go together like Chaos Cults and Heresy!

Author: Adam Harrison
Writer, Editor, Texas Native, and Austinite for 15+ years, Adam covers all things Tabletop Gaming. Which includes Warhammer 40,000, Age of Sigmar, D&D, Board Games and everything else that involves dice, boards, cards and a table. A hobbyist, player, and collector of miniatures and games, Adam's current obsession are his Death Armies for Age of Sigmar, his Blood Angels and Tyranids for 40k, and his ever growing Arkham Horror: The Card Game Collection.
Advertisement
Adeptus Mechanicus Games Workshop Imperial Knights Warhammer 40k
Advertisement 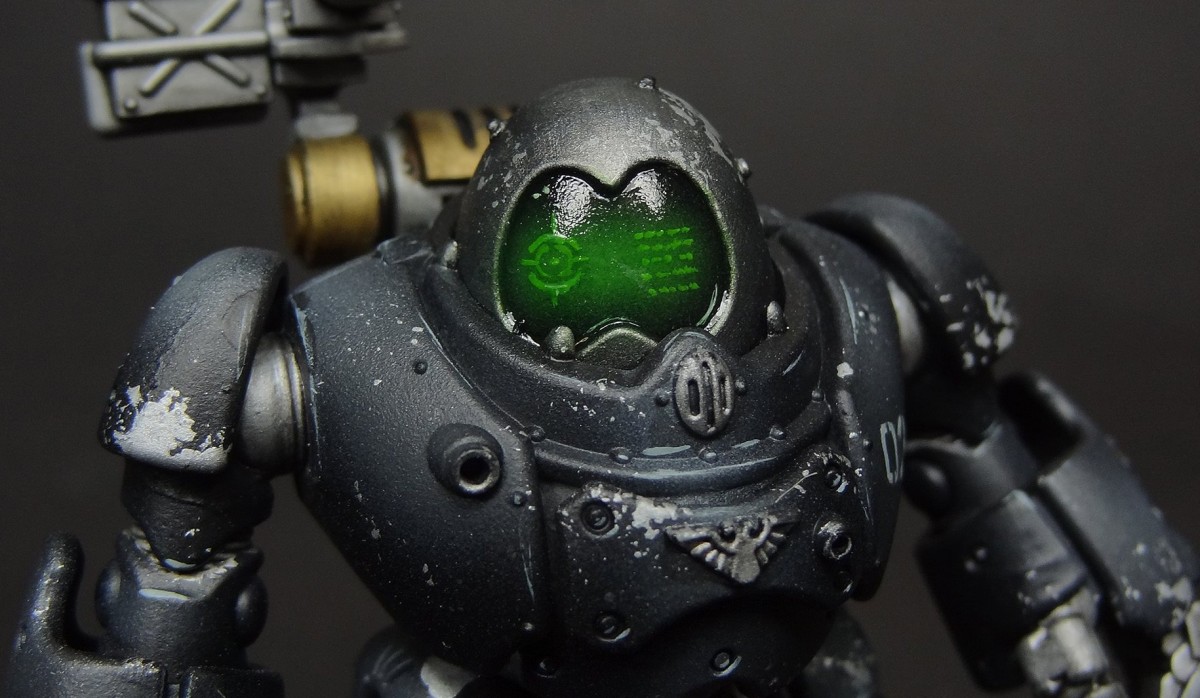