In the Grim-Dark of the 40k Universe Friendship is still magic – check out our list of the greatest team-ups of ALL-TIME!

Over the years, we’ve seen bitter enemy team-up to fight bigger threats. We’ve seen alliances form where we thought there was NO WAY that would happen. And we’ve seen old alliances reforged and renewed in battle. We’ve scoured the lore and picked out 5 of the greatest team-ups of all-time so lets dive in!

Wait, did we just start with a trio? Yes we did! Why? Because this team-up is pretty epic! It’s Guilliman’s return and he’s got the “most righteous” of the Grey Knights on one side and” the shady-ist gunslinger” in all of 40k on the other! This is basically the best setup to a buddy-cop movie the Grim-Dark has ever produced…Voldus would probably play the wise, old Lieutenant. Guilliman would be the hard nose “by the book type” and the wild-eyed maverick would be Cypher naturally. They would develop a grudging respect for each other and eventually solve problems by asking “How would the other guy do it.” I mean, if we can get like 4 Lethal Weapons and TV series…c’mon!

The Old Great Wolf has a long, sorted history teaming-up with the Grey Knights. They pretty much always win – but a planet usually gets completely hosed in the process. I’m sure lots of folks are probably thinking about the events that happened recently in the Fenris System. Yeah…those were pretty bad. But my “favorite” example comes from a lot earlier in the lore from a little planet called Armageddon.

Angron and a force of 50,000 World Eaters showed up on Amrageddon to launch the First War for Armageddon. Daemons were summoned, lives were lost, and the Space Wolves had to team-up with the Grey Knights and the PDF as well. The Imperium eventually won the day at great cost…but that’s when the twist came:

Although they had won, the victorious soldiers of Armageddon were doomed. They had gained knowledge of the existence of Chaos, and been exposed to its corruption. The Inquisition had all of the people who fought on the planet, except for the Space Marines, sterilized and placed in work camps. Armageddon was re-colonized by people from other regions of space with no knowledge of the war. The Inquisition and Grey Knights went on to purge Imperial Navy and Adeptus Mechanicus ships orbiting the planet and Grey Knights Strike Cruisers destroyed Imperial Guard troop transports that were departing. Three entire nearby worlds were put to the sword to silence the populous when they had heard of the exploits of Stormtroopers that were at the battle of Helsreach Hive. The purges claimed several billion souls.

Logan Grimnar battled long and hard to prevent this and even attempted to have his fleet escort ships of survivors away from the Inquisition, but after an attack by the Ordo Malleus and Grey Knights he failed and has never forgiven the Inquisition for doing what he saw as a betrayal of the people who had fought honorably for their homes and for the Imperium. Moreover the worlds that came into contact with the survivors escorted by the Space Wolves where also put to Exterminatus, resulting the destruction of the Adeptus Astra Telepathica station Ralas Meridian, the worlds of Jendara Quintus and Tybuilt, and the Adeptus Mechanicus outpost of Priam Novus.

Oops. This was a great team-up! Too bad the Inquistion is full of jerks, amirite?!

The Horus Heresy is probably the single most important event for 40k. It launched a “ba-jillion” conflicts and the ripples of the war are still being felt to this day. That’s why we had to include the Team-up of the Traitor Legions as one of the greatest team-ups of all-time. Yeah, they lost…but they had all the odds stacked against them! Plus the final fight came down to Horus and the Emperor at what was basically the enemy’s end zone! Horus almost WON.

Regardless if you’re a traitor or loyalist, you have to respect the fact that Horus pushed the Imperium to the very brink. He and his brothers rose up against the Imperium and got farther than anyone else ever had. That’s pretty impressive. 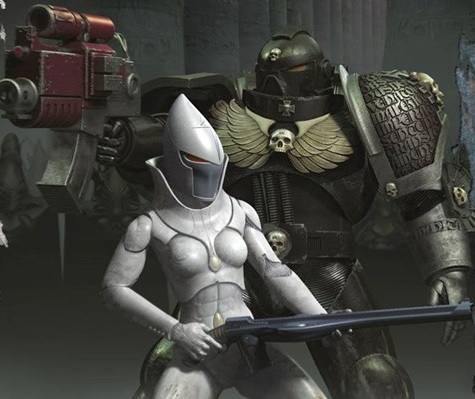 This is one of those cases where two enemies have to come together to stop a greater threat. But these two enemies just happen to be the Deathwatch (a kill-team put together specifically to KILL XENOS) and the Eldar of Craftworld Ulthwe – a Craftworld on the verge of chaos and who’s people are perhaps the most militant and “pro-Eldar” of all the Craftworlds.

These two forces should be like Oil and Water! Or matter and anti-matter! The should annihilate on site…but they don’t! On the contrary, they team-up to kill Tyranids because only Tyranids can bring such hated enemies together in friendship…You can read their adventures in the Deathwatch Series.

The Gehenna Campaign, more commonly called Team Fistbump, the campaign that spawned at least one very popular meme. The battle itself isn’t much more than a footnote in the Blood Angel’s 5th Edition Codex:

Commander Dante and the 3rd Company of the Blood Angels would battle against the Necron Legions of the Silent King amidst the dusty wastes of Gehenna. For three weeks, neither side could seize the upper hand, with Dante’s tactical brilliance stretched to its limits in countering the space-time manipulations of the Silent King. The stalemate was broken only when a Tyranid splinter fleet entered orbit, forcing the two armies to break off hostilities and fight against a common foe. The impromptu alliance defeated the Tyranids in the end and after the battle Dante and the Silent King went their separate ways, both too exhausted from the battle against the Tyranids to continue their war and at least for Commander Dante, the distasteful idea of turning on those who they had recently fought alongside.

However, the fact that you can pretty much ask any 40k veteran “hey what do you think of Team Fistbump” and they will know exactly what you mean should speak for itself. That’s why it’s on our list of the greatest team-ups of all-time!

Read more about the Grim-Dark at the Lexicanum

There are LOTS more team-ups for both the Heroes and Villains of the 40k universe. We’ve barely scratched the surface. We skipped over things like the War in Heaven where the Necrontyr and the C’tan teamed up to fight the Old Ones and the Eldar. Or the time the Demiurg joined the T’au and helped with their space-faring ways. Or how the Inquisition recruited the extras from Planet of the Apes!

If you’ve got a favorite team-up let us know what it is and why in the comments below!

Author: Adam Harrison
Writer, Editor, Texas Native, and Austinite for 15+ years, Adam covers all things Tabletop Gaming. Which includes Warhammer 40,000, Age of Sigmar, D&D, Board Games and everything else that involves dice, boards, cards and a table. A hobbyist, player, and collector of miniatures and games, Adam's current obsession are his Death Armies for Age of Sigmar, his Blood Angels and Tyranids for 40k, and his ever growing Arkham Horror: The Card Game Collection.
Advertisement
Games Workshop Lore Warhammer 40k
Advertisement