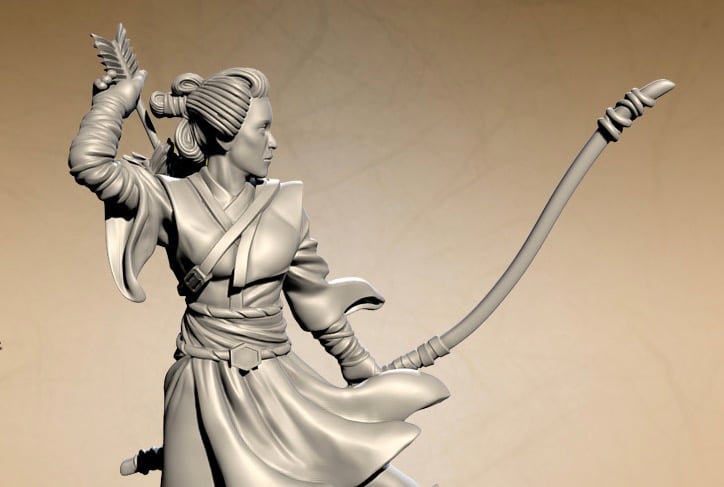 Today I have another unboxing article for some more of my favorite gencon minis: this time it’s the Sworn Sisters for Bushido.

The sisters are part of a dual release with the Blood Brothers. Both sets of minis comprise what could almost be described as mini-factions unto themselves. Since they aren’t technically a starter set, each sister is packaged separately in an individual clam shell pack. 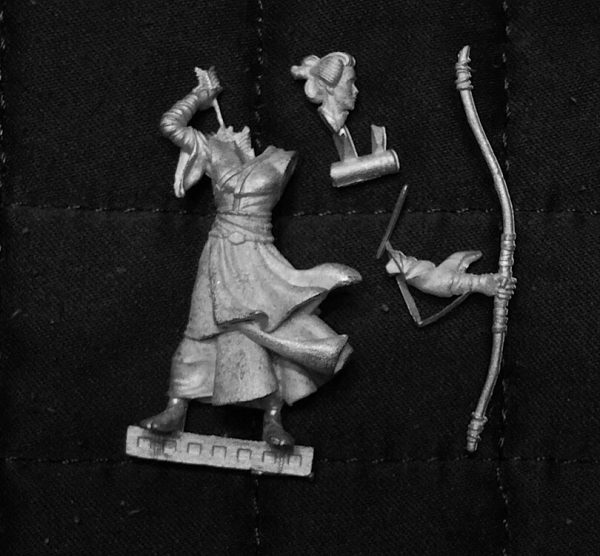 First up we have Yanjing. If you’re wonder why her name sounds more Chinese than Japanese (I mean these are Ronin right?) there is a reason.

The sisters are from outside the normal geographical confines of the Bushido setting. The Japan-inspired mythical Jwar Isles are where all your games take place, but these ladies have ventured there from the larger world outside. Because they are masterless warriors, the proper Jwar word for them is Ronin. Additionally in the context of the game, a Ronin is just a model that can be included with multiple factions. 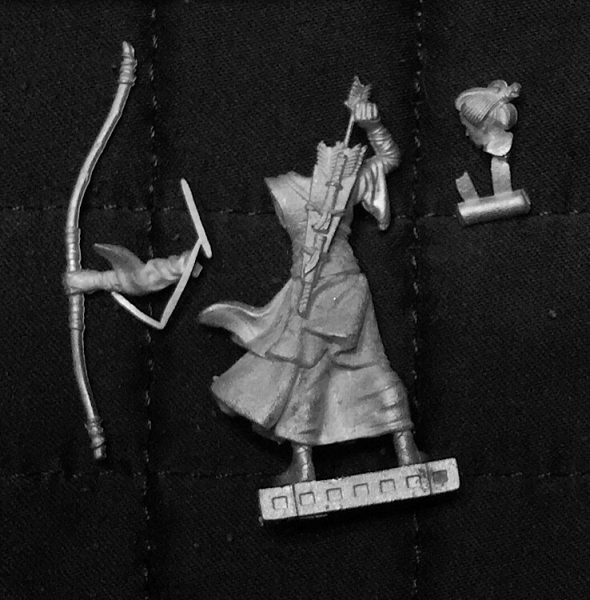 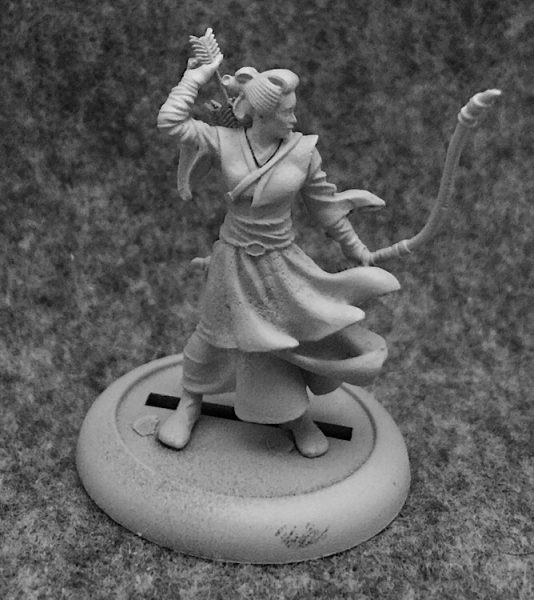 I went ahead and assembled her. 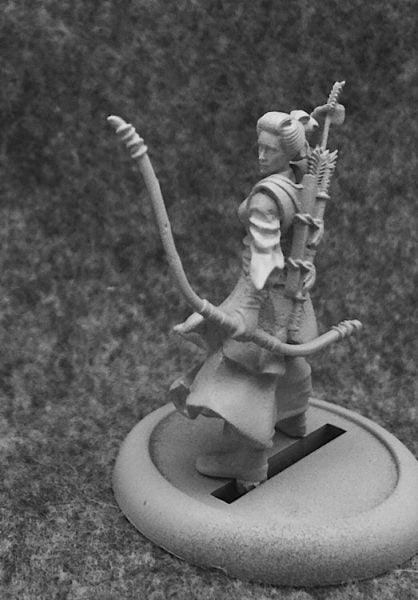 The guys at GCT are able to get some incredible detail in their metal. The tradeoff is it seems just a little softer than some of the metal I see used by some other companies. 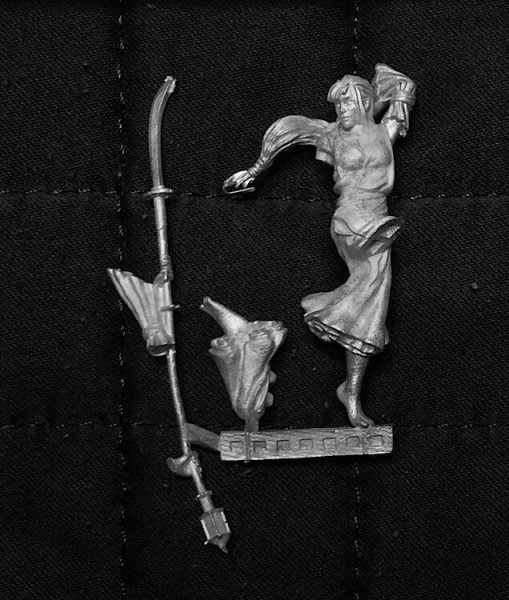 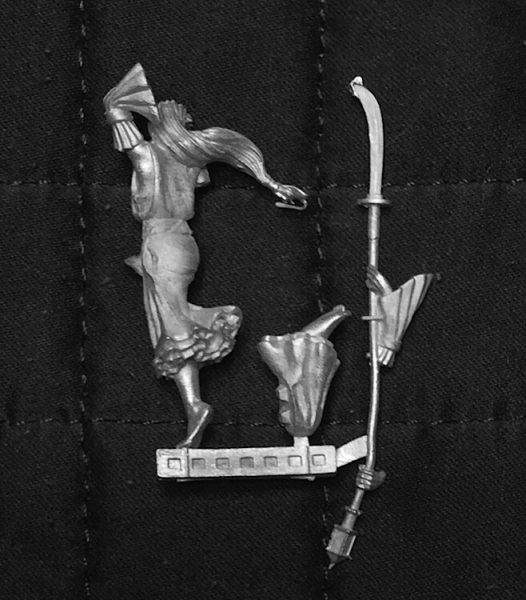 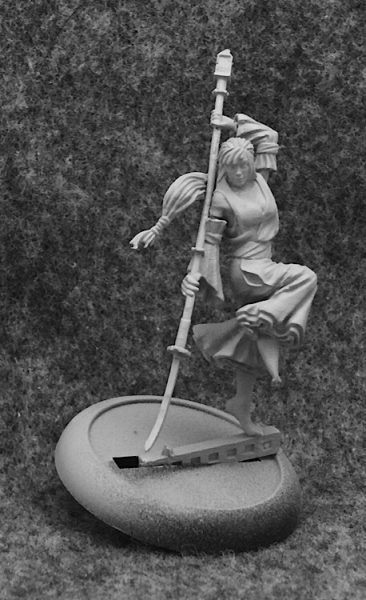 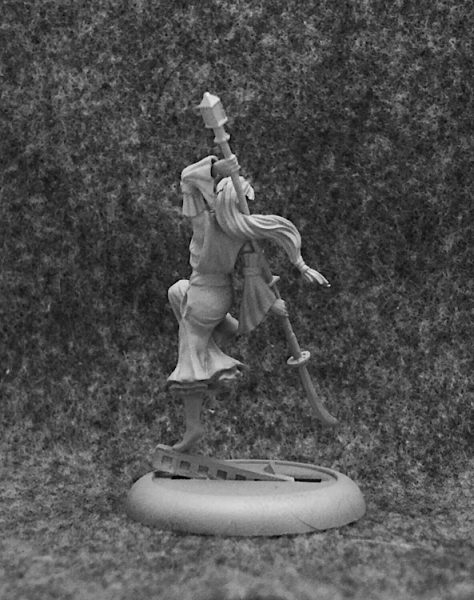 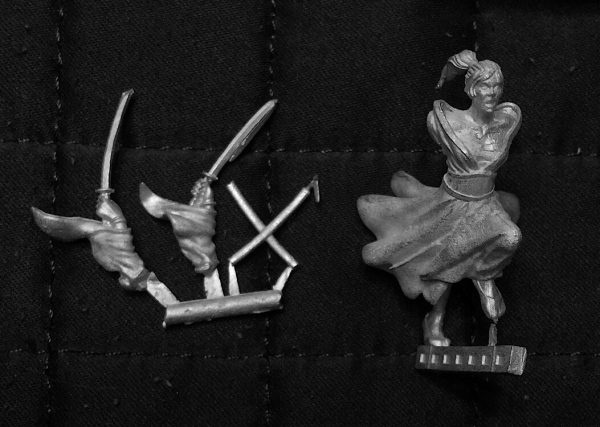 Finally we have Yizhi. 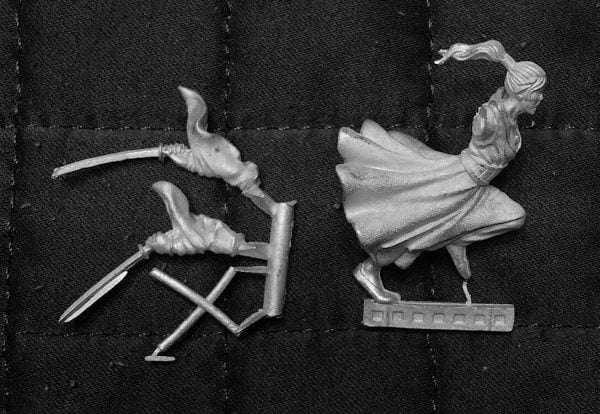 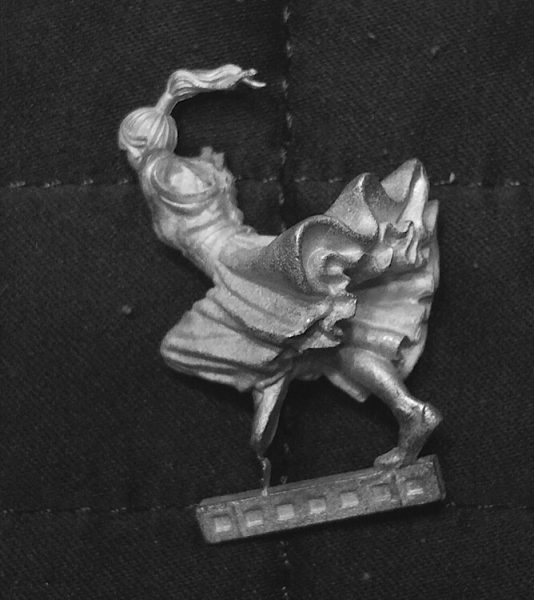 And one final shot just so you can see all the great detail of the ruffled cloth. 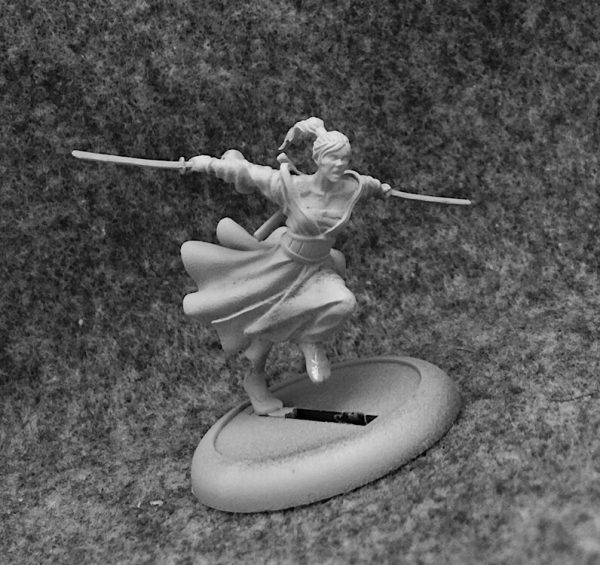 I love her pose, but the ankle will be a little fragile so be careful with it. 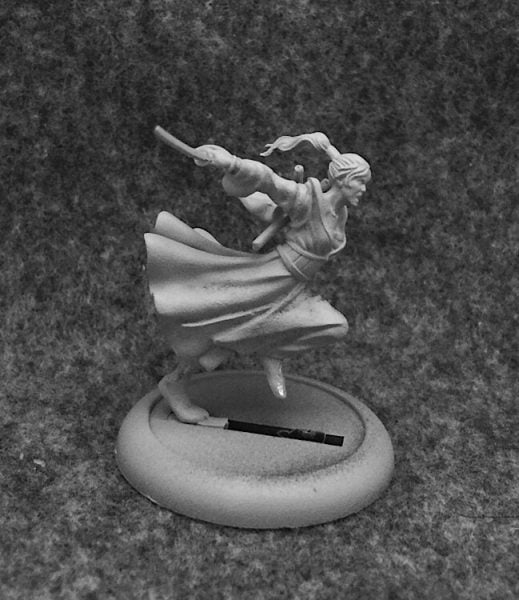 I had to get multiple shots of her assembled. 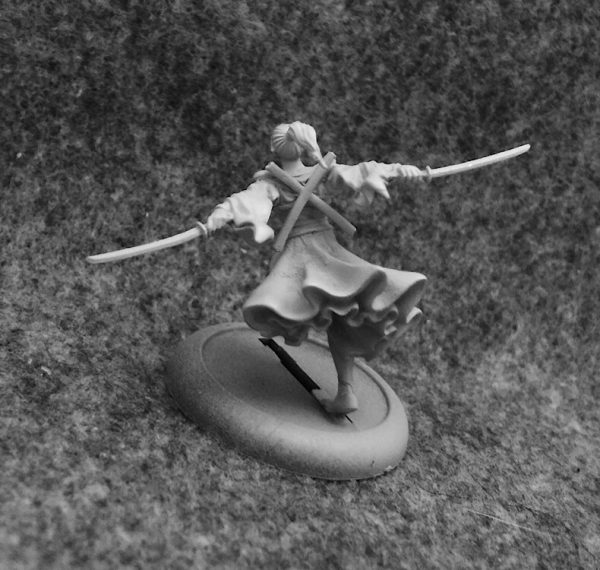 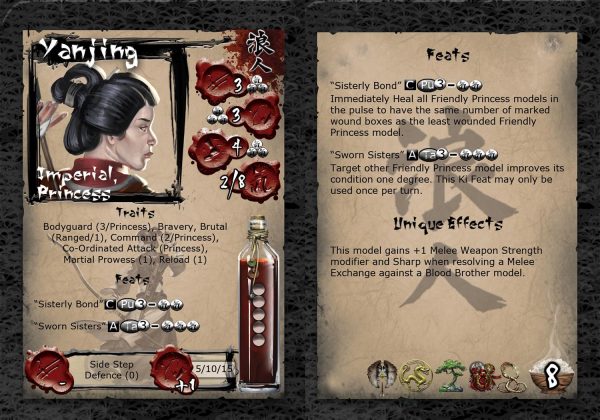 Yanjing is a competent archer. A Ranged Attack with the Brutal skill is very useful. She’s almost as comfortable in melee with Martial Prowess 1. Her unique Ki Feat can also heal a tremendous amount of wounds for two Ki. It will force opponents to try to go all in whenever they attack a sister and kill her in one go, or spread out their forces to keep them evenly wounded. 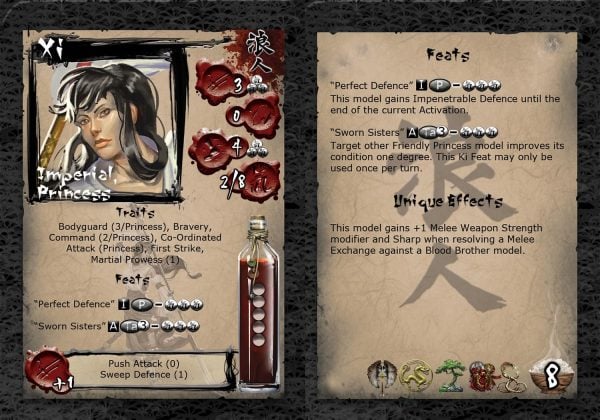 Xi is a huge pest with First Strike and Push Attack 0. It will be very hard to kill her in melee as she will always be shoving you back before you can resolve damage against her. If she finds herself unable to use First Strike she can spend some Ki to get Perfect Defense. 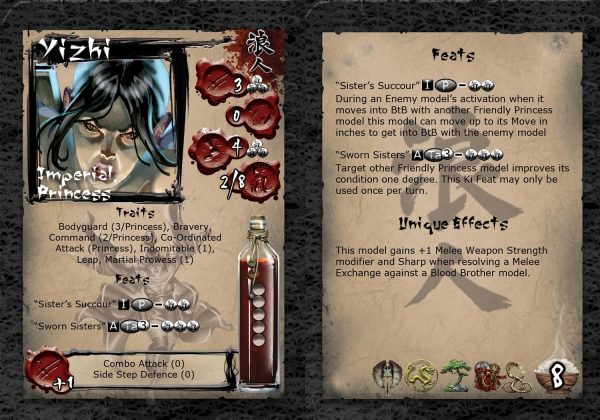 Yizhi can dish out a lot of pain with mage and Combo Attack 0. Sister’s Succor will also drive opponents crazy as they find the model they just moved into melee is suddenly outnumbered. Leap can also be really useful when you have to get to an objective.

Because all three sisters share Bodyguard (3/Princess), Coordinated Attack Princess, and the Sworn Sisters Ki Feat, they are best used together. Their biggest downsides are their low health and mediocre Ki and melee stats. A lucky shot from a ranged attack can finish one off easily. Nonetheless each of them is absolutely worth their 8 point cost.

Because they are Ronin there are an enormous number of ways you can field the sisters. In fact, you can even choose to field them only alongside other Ronin models with the Imperial keyword giving them a flavor all their own. 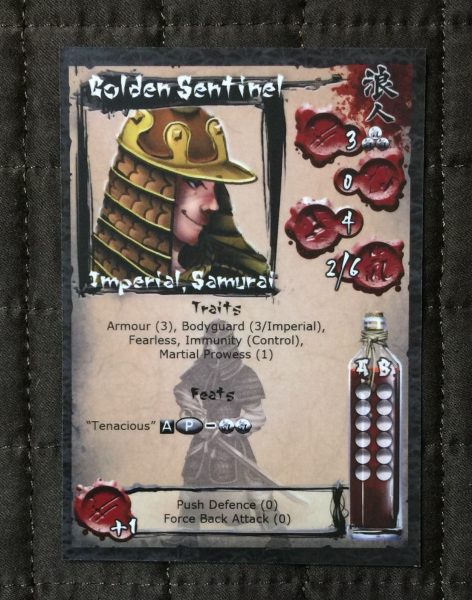 Here’s one of those Ronin. The Golden Sentinel has been around awhile but a new sculpt will be released very soon. If I’d realized he’d been redesigned I would have grabbed him at Gencon. This card came packaged with the Sisters and the new one is not yet available on the Bushido site. 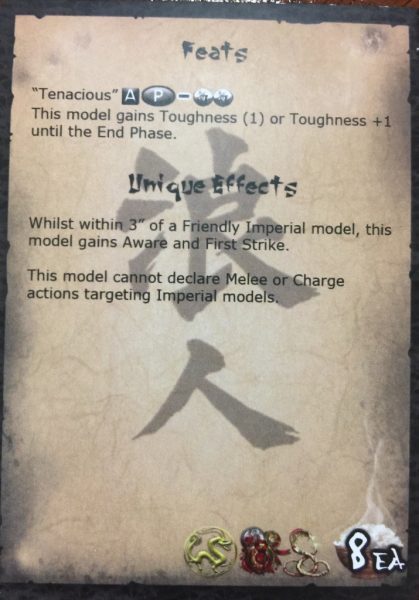 Golden Sentinels are pretty insane for 8 points. Note though that they cannot be taken with Tengu or Ro-Kan – unlike the Sisters. This can have an impact on which Events and Terrain features you can use.

One of these guys and Sworn Sisters give a player four models with Bodyguard – and a lot of potential for out-of-activation movement shenanigans. They will also have a lot of Bravery and Fearless to help deal with scary factions like Yurei and Savage Wave. The downside is you will have few models to run Scenarios with.

This setup will run you 32 points leaving you three for Generic Enhancements or Events and Terrain. Since technically there is no Ronin or Imperial faction, you will still have to pick a faction with which to play these Imperial models. Fortunately having a faction allows you to pick the Faction specific Events and Terrain that you think will be the most helpful to the sisters. 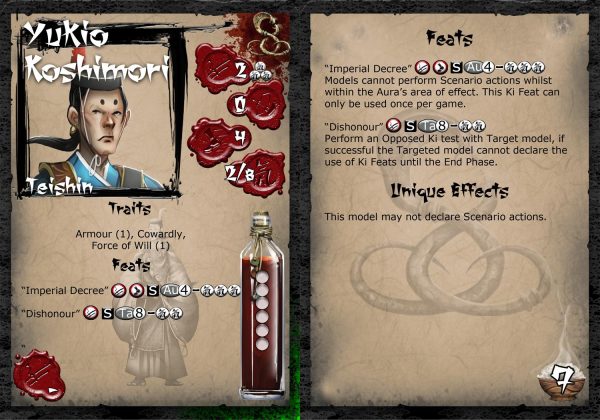 To bring your Imperial force up to 50 you will need another Golden Sentinel and this model. This card is not current. Expect the new Yukio to function similarly and have the Imperial Keyword. These 6 models will run you 47 points, again leaving you three for whatever you like.

Of course you can just add the Sisters to an existing Tengu Decension, Silvermoon Syndicate, Temple of Ro-Kan, Prefecture of Ryu, or Ito Clan force. If that’s the route you choose to go then I would advise your other model choices focus on running objectives and the Channel ability – assuming of course your chosen faction has access to it.

The Sworn Sisters are a very interesting little trio and should be a lot of fun to play. I also love the addition of this secret Imperial “faction.” Why are the mini-factions always so intriguing to us gamers?

If looking at these models has you thinking hard about picking up Bushido, there is one more thing you need to know if you live in the U.S. There are only a few places in the country that carry this game. I know of only four online retailers: FRP Games, Noble Knight, Fantization, and Atomic Empire. And of course there’s always eBay and Amazon.

The fact that I managed to track all these places down should show you just how far I’ll go to find models for this game. What’s even harder is to find the retailer with all the models you want in stock at the same time. Of course if you’ve had luck with them in the past you can always order from Wayland Games. Personally I’m always a little reluctant to have things shipped to me from outside the country. If you’re going outside the country anyway I’m sure GCT studios would be happy to take your money directly.

This article first appeared on my own blog toomini. Follow it to get a look at these articles before they show up on BoLS. There are also a lot of great painting articles there that haven’t made it here yet

~Hope you enjoyed the article. How will you field the Sworn Sisters?

Author: Ben Williams
Ben Willimans is a Professional Painter and Columnist at Bell of Lost Souls. He has been involved in the hobby and art side of miniatures and the tabletop gaming industry for over 20 years. He has won multiple national painting awards.
Advertisement
Bushido GCT Studios Miniatures Unboxing
Advertisement 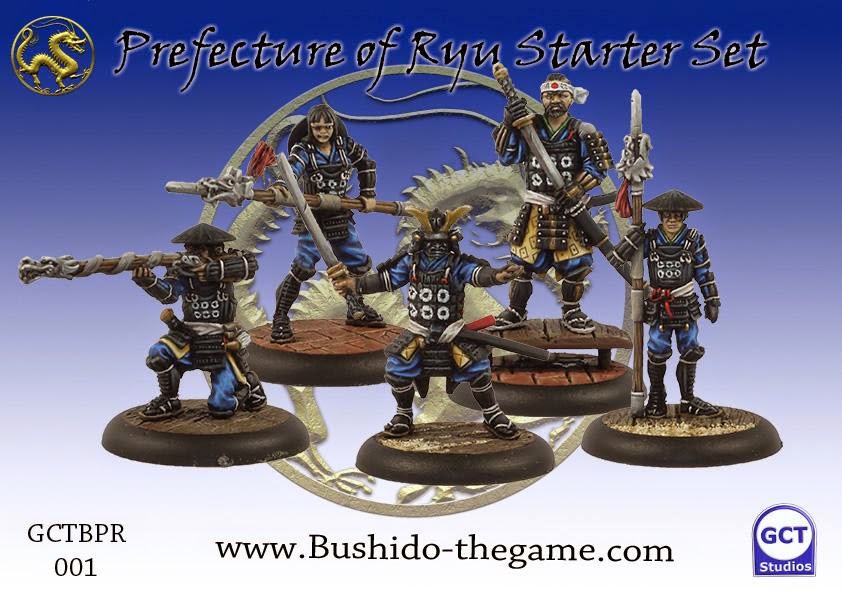