Come preview two of the Subclasses that will be released in Xanathar’s Guide to Everything. The Inquisitive Rogue and the Horizon Walker Ranger await!

Xanathar’s Guide to Everything is a scant 55 days away, so it’s in the final rounds of getting ready to ship out to your FLGS–and in the meantime, to tide us over until time does its inexorable work and the release day is here, we have two previews for you today. Jeremy Crawford sat down with D&D Beyond and talked about two of the subclasses that will be featured in Xanathar’s Guide, which is as short an abbreviation as you’re going to get. To shorten it further would be to displease the Xanathar and none who have done that have lived.

So bearing that in mind, let’s take a look at Xanathar’s Guide to the Inquisitive Rogue and the Horizon Walker Ranger.

First up is the Inquisitive Rogue. Here’s a video, courtesy of D&D Beyond:

The Rogue Inquisitive is all about being an awesome detective. They made a pretty solid appearance in the Gothic Heroes Unearthed Arcana about a year or so again. Now in the interview, Crawford mentions that the class has had “a few tweaks” from the original inception, but otherwise it’s pretty close. So as a refresher on the Inquisitive:

They are the masters of Insight. Their 3rd level ability gives you early access to something that functions like Reliable talent (though it only nets you a guaranteed 8 on your die roll), which is fairly useful because you’ll be using Insight a lot–though once you get to Reliable Talent, this class ability kind of falls by the wayside. But that’s okay, because the real workhorse class features are the ability to make a Perception, Investigation, or an Insight check as a bonus action. This last one fuels the Insightful Fighting which is where the Inquisitive stands out. 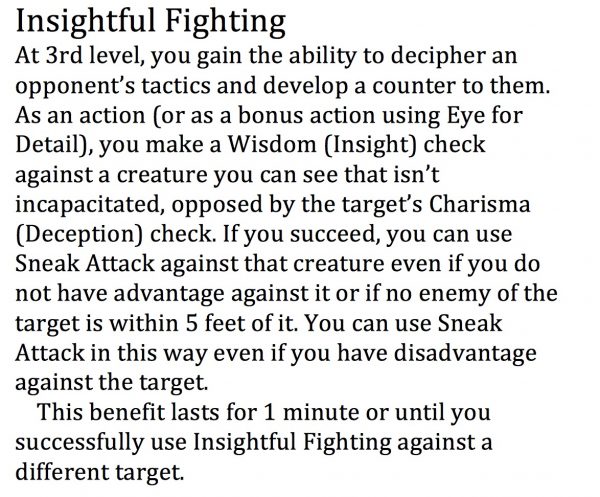 And this gets better as you level up. When you hit 17th level (if any of your campaigns make it to those lofty shores), you get an extra 2d6 Sneak Attack damage. As they get more powerful they gain the ability to give themselves advantage on perception checks, and even know when someone is trying to magically deceive their senses. Basically they’re an excellent spy or counter-spy. If you want to play up the intrigue side of things, this subclass can help get the job done. Or be a bounty hunter and put truth to the old saying set a Rogue to catch a Rogue.

On to the Horizon Walker.

The Horizon Walker is infused with extraplanar power. They are a kind of magical scout, where the other Rangers are all about the power of nature, these Rangers understand that they are in a D&D game, and that there’s magic, secret portals, and all kinds of other BS just lying around. And they’re tired of ignoring the vast power of the cosmos for a trusty longbow/dual wielding/fighting with a wolf. Okay that last one’s pretty cool, but you get the idea.

To that end, Horizon Walkers are a Ranger for a magical setting. They can sense when an extraplanar portal is nearby–though this ability has been tweaked, and they go out of their way to mention Sigil as being one of the reasons they might want to nerf that. Which is interesting to me not just in terms of a lore perspective, but also

One of the mundane items players can come across in the Tomb of Annihilation is a Sigil Gate Key. Which makes me wonder if they don’t have something further planned–this is probably just hoping against hope, but I will hold on to the dream of an updated Planescape for 5th Edition forever. That way, if it does come out, later on, I can point back here and take all the credit.

Moving along though, it sounds like they’ve streamlined the way the Horizon Walker works. Clearing up things like its defensive damage resistance at level 17, and the ability to gain access to Misty Step and teleportation besides just the combat utilities that they have. They’re all about stepping between the planes and making attacks. I am curious to see how the final version ultimately shakes out.

Anyway. This is just a taste of things to come. More Xanathar’s Guide news is probably soon to be inbound, especially as Wizards of the Coast’s Extra Life fundraiser continues to pull in money to benefit the Children’s Miracle Network Hospitals. So be sure and keep at least one of your eyestalks on BoLS for more news and stews.

Apparently we don’t have any stews, so it’s just news.