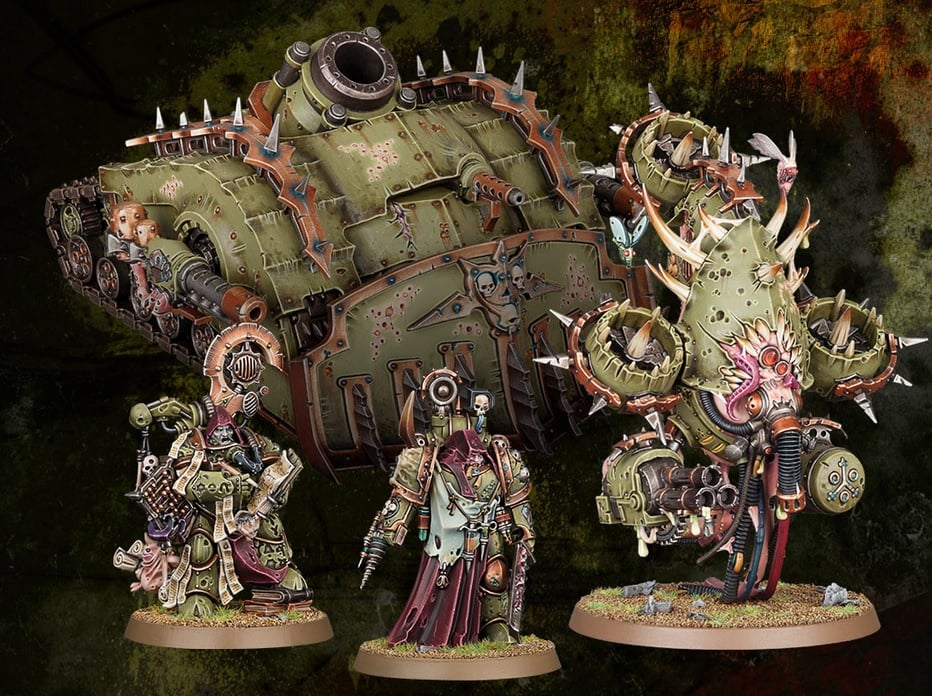 Good ol’Papa Nurgle has some new toys he wants to share with the world – More Death Guard kits PLUS the Astra Militarum Codex this weekend! 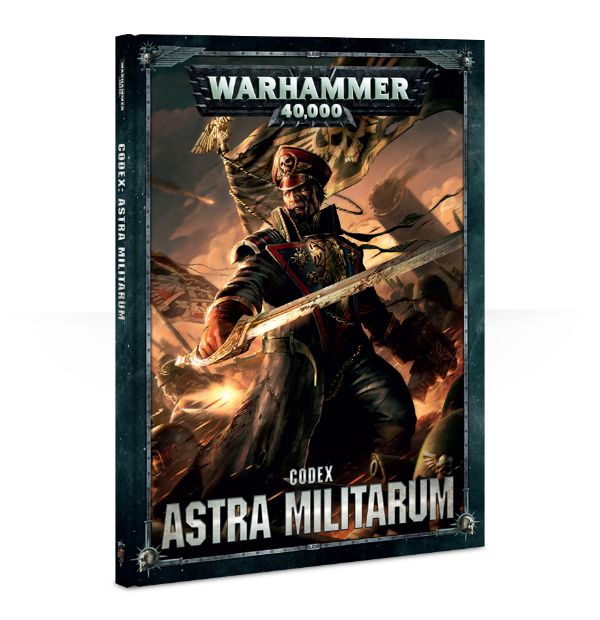 The Astra Militarum is the implacable military arm of the Imperium, and one of the largest forces in the galaxy. On thousands of battlefields scattered throughout the galaxy, the soldiers of the Astra Militarum march to war. They are the Hammer of the Emperor, who with faith, fury and sheer weight of numbers crush heretics and xenos alike beneath their boots. Massed ranks of Guardsmen unleash concentrated salvoes of las-blasts while officers bellow orders over the thunderous roar of tank and artillery fire. 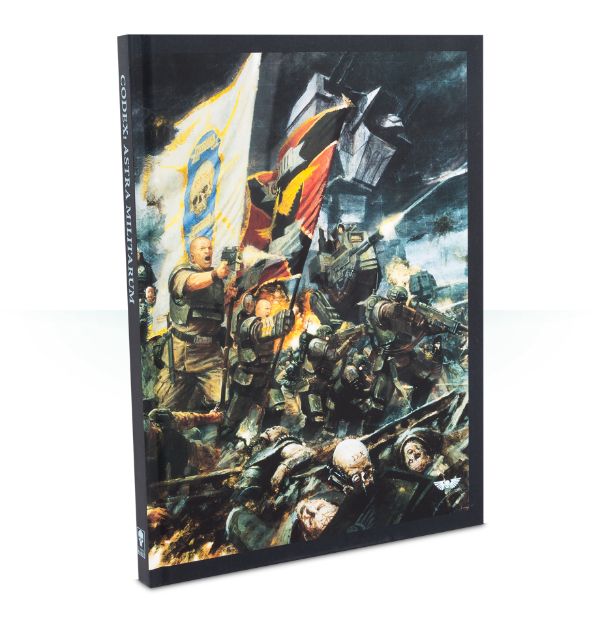 Available while stocks last, this Collector’s Edition of Codex: Astra Militarum is complete and unabridged, and features a soft touch cover with new artwork on the front and back, black page edges, a black ribbon marker and the original Codex cover art on the first page. 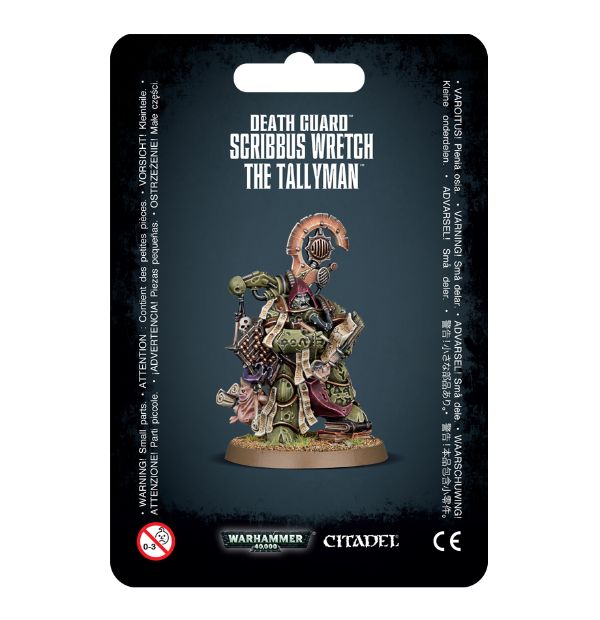 The worshippers of the Dark Gods know that there is power in words and numbers, incantations and arcane numerology. Seven is the unholy number of Nurgle, and the preachers of this doctrine are the Tallymen. Part priests, part demagogues, part metaphysical scribes and quartermasters, these festering zealots stride to battle festooned with the trappings of their strange craft – reams of parchment, crawling with tallies of seven in a strange, crabbed hand, counting the horrors inflicted on the Death Guard’s foes. 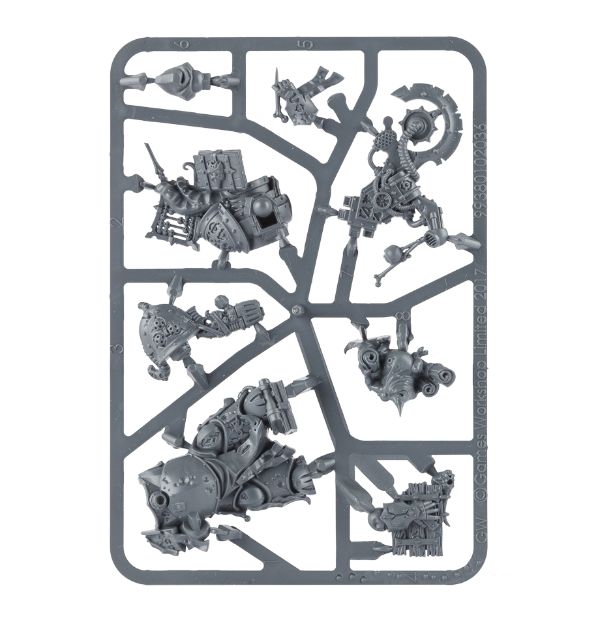 This multi-part plastic kit contains the parts necessary to assemble Scribbus Wretch, a Death Guard Tallyman. His is a particularly unpleasant model, even for Death Guard, with a morbid focus on gleefully counting and cataloguing misfortune – he carries a massive ream of paper on a clipboard in the crook of his left arm, with a bone stylus in his right adding to his tallies. A strange apparatus hangs from his back, ending in a tentacle that grasps an abacus – its beads, upon closer inspection, reveal themselves as skulls. His armour, as standard for the Death Guard, is covered in corrosion, boils and Nurgle icons, and he is accompanied by a Nurgling, busy with the task of carrying extra ink and paper. Scribbus Wretch stands atop a pile of books; likely written by him, and full of atrocities.

This kit comes as 8 components, and is supplied with a Citadel 40mm Round base. 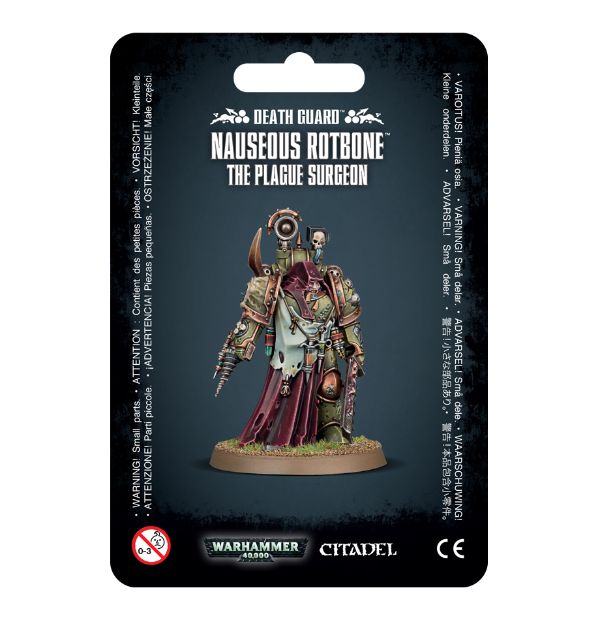 Sinister, hooded figures, Plague Surgeons drift through the mayhem of battle like ghoulish spectres of death. They were once Death Guard Apothecaries who brought healing to those who could be saved, and absolution to those who could not. Damnation transformed their order, rendering them the dark antithesis of what they once were. The very touch of a Plague Surgeon is virulently infectious, while every breath they exhale teems with spores and Daemon motes. The miasma that drips from their weapons and surgical instruments only adds to this effect. Any for foolish enough to engage a Plague Surgeon in combat will soon be crawling with empyric disease. 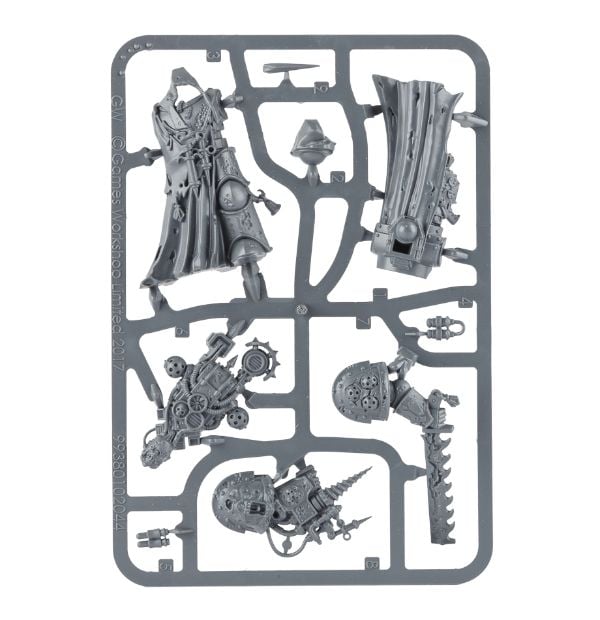 This multi-part plastic kit contains the components necessary to assemble Nauseous Rotbone, a Death Guard Plague Surgeon. He carries a bolt pistol and balesword, but where the real fun lies is in the various corrupted medical instruments he carries – narthecium-like instruments containing horrific plagues are all over his armour, with an ancient, rusted reductor perfect for stealing gene-seeds on his right arm. Much of his armour is concealed by a cowl and cloak, but the armour that is visible is covered in the pits, rust and corrosion expected from such a devotee of the Death Guard. His right shoulder bears a vile plaguebearer’s head, and the device on his back… the less said about that, the better.

This kit comes as 9 components, and is supplied with a Citadel 40mm Round base. 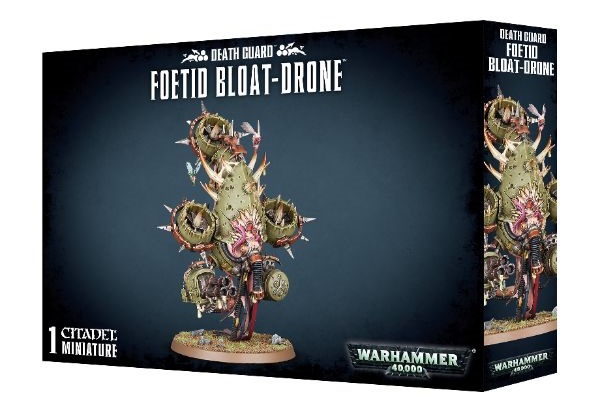 Labouring through the air on buzzing turbines and driven by the trapped essence of a Nurgle Daemon, the Foetid Bloat-drone drifts toward the enemy like an armoured plague fly. This hideous war engine bears monstrous weapons onto the battlefield to annihilate the enemies of the Death Guard. Clad in rusting plates of rot-iron armour, their hulls overflowing with flabby foulness, Foetid Bloat-drones can withstand ferocious amounts of punishment and still keep fighting. They are designed to hover in close, drifting lazily through the most treacherous of terrain to provide supporting fire. 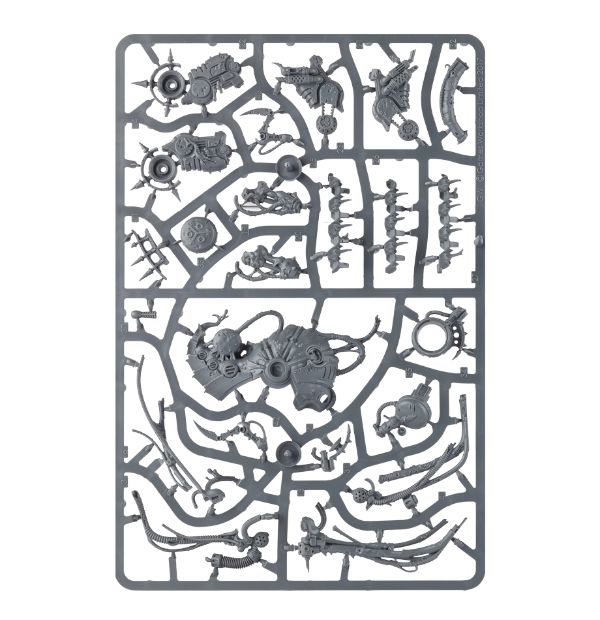 This multi-part plastic kit contains the components necessary to assemble a Foetid Bloat-drone. A huge, intimidating amalgamation of machine and rotting meat, the front of the model is dominated by a carapace which can be assembled as 1 of 3 options – one featuring a Nurgle symbol picked out in skulls, one featuring the symbol carved into the carapace, and one featuring a hideous toothed maw covered in pustules, tentacles and hoses dangling from within. It comes armed with 2 plague spitters and a plague probe; whichever carapace you pick, the plague spitters can be replaced with either a heavy blight launcher or a flesh mower (which looks as utterly ghastly as it sounds…) The back of the model is a riot of horrendous detail, with obscenely stretched skin spilling over the metal structures that barely contain it. 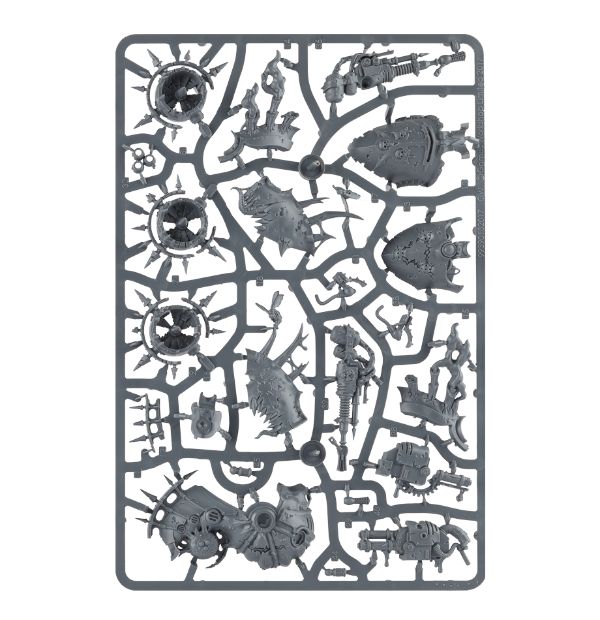 The kit comes as 44 components, and is supplied with a Citadel 60mm Round base. 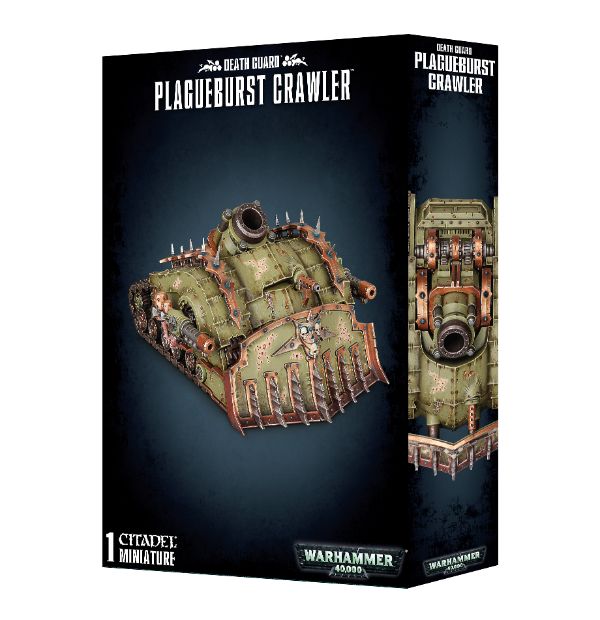 Plagueburst Crawlers are lumbering, formidable siege tanks whose huge ram-blades, thick armour plating and daemonic energies provide them with incredible resilience. Their fearsome plagueburst mortars boast a parabolic fire arc and terrifying range, while the shells they fire combine high-radius explosives with lethal clouds of corrosive spores to inflict damage comparable to that of Imperial Demolisher cannon. The remainder of the Crawler’s weaponry is intended to slaughter the foe up close, spraying diseased slime and hails of vital shells at any who approach. 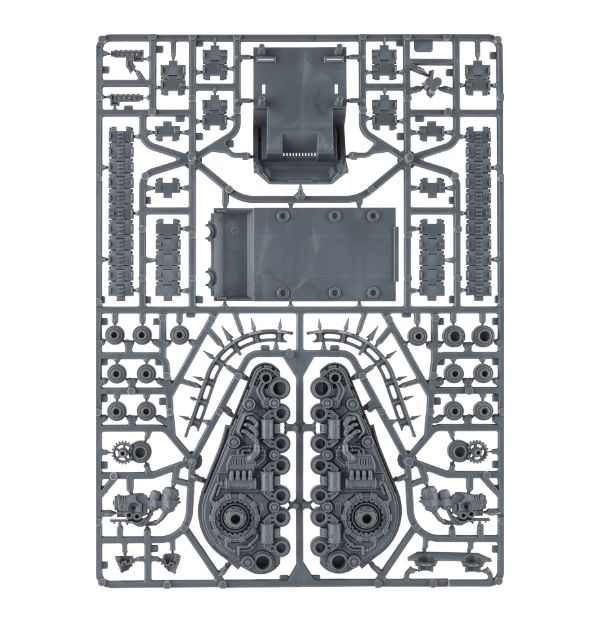 This multi-part plastic kit contains the components necessary to assemble a Plagueburst Crawler. An extremely front-heavy tracked dozer brimming with horrible weaponry, it is covered in thick armour pitted and rusting with corrosion and decay. A standout feature is the huge, spiked dozer blade, with a symbol of Nurgle proudly displayed, picked out in skulls. It bears 2 plaguespitters on the sponsons, which you can replace with the 2 included entropy cannon, and the heavy slugger at the front-centre can be replaced with a rothail volley gun – each option is equally potent, but the biggest worry to the enemy is undoubtedly the plagueburst mortar, whose targeting mechanisms and enormous barrel dominate the rear of the vehicle. 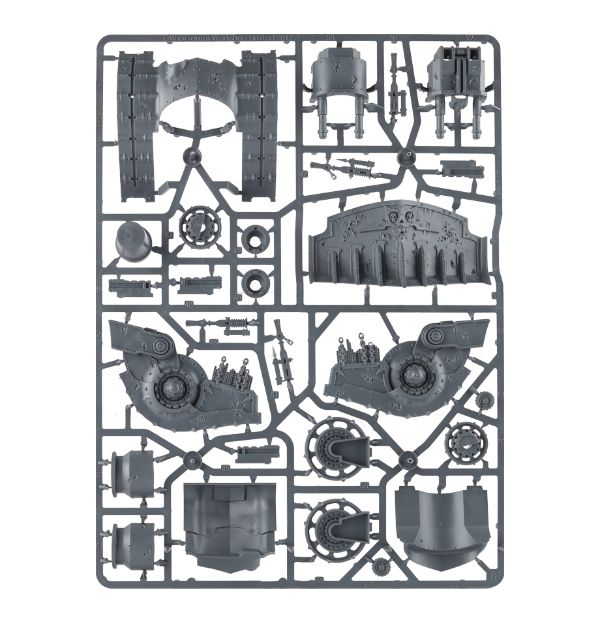 This kit comes as 71 components.

Realm of Battle: Moon Base Klaisus $80 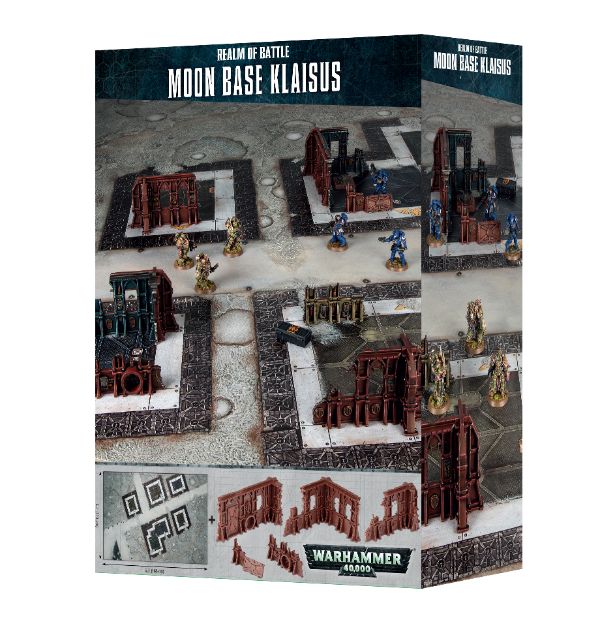 The perfect way to start a collection of Citadel scenery, this is literally a battlefield in a box! The best way to play games of Warhammer 40,000 is on specially-made terrain – it just feels that bit more immersive to move your models around a true representation of the war-torn far future, instead of just the kitchen table. Moon Base Klaisus has been designed as a great entry point to this side of the hobby – it requires no painting, takes 5 minutes to set up and put away, and fits on the average family dining room table. Included in the box: 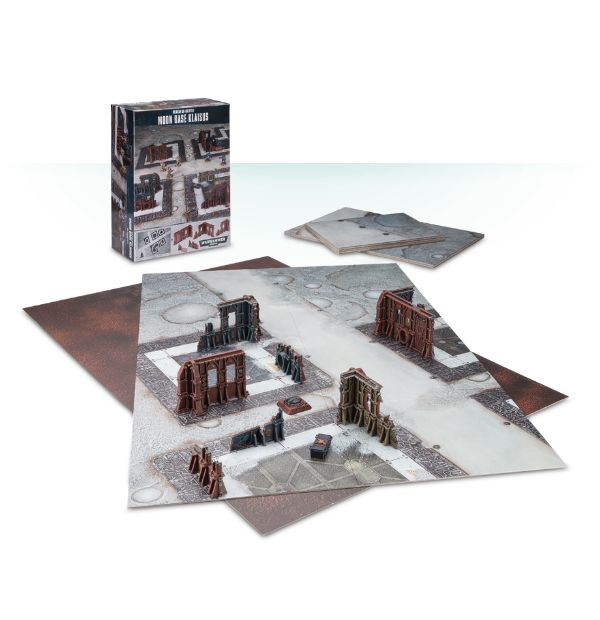 – 4 fold-out gaming boards, made of extra-thick, hard-wearing card. These sit next to each other on your table to form a 5’ 6” x 3′ 4″ battlefield. The boards are double-sided, one side featuring the ruins of Moon Base Klaisus, and the other featuring a Martian landscape;
– 4 push-fit plastic scenery pieces – no glue required – representing ruined wall sections, which your models can take cover behind. Each of these is able to slot into the others in any combination, allowing a variety of scenery – especially when combined with the 3 plastic ruins, access hatch, and Inquisitorial crate that are included. Each of these scenery pieces are designed to be match the Sector Mechanicus scenery kits available, making expansion easy;
– 3 Crucible of War missions, designed to be played using the contents of this box. These can be played individually, or linked together, giving you a campaign. 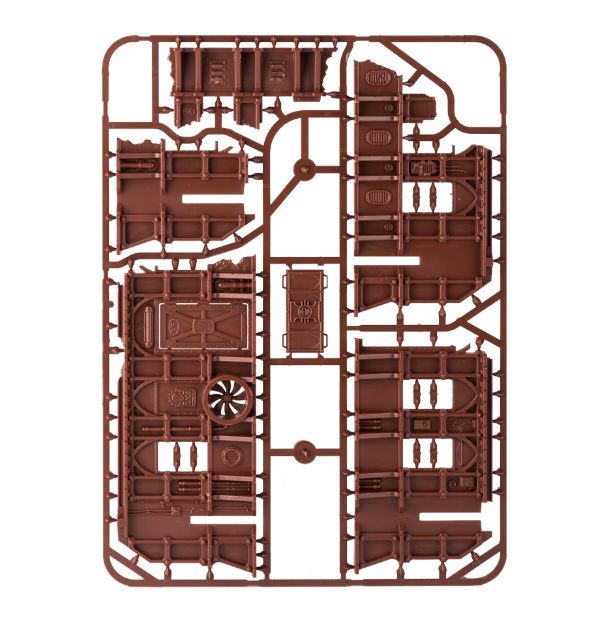 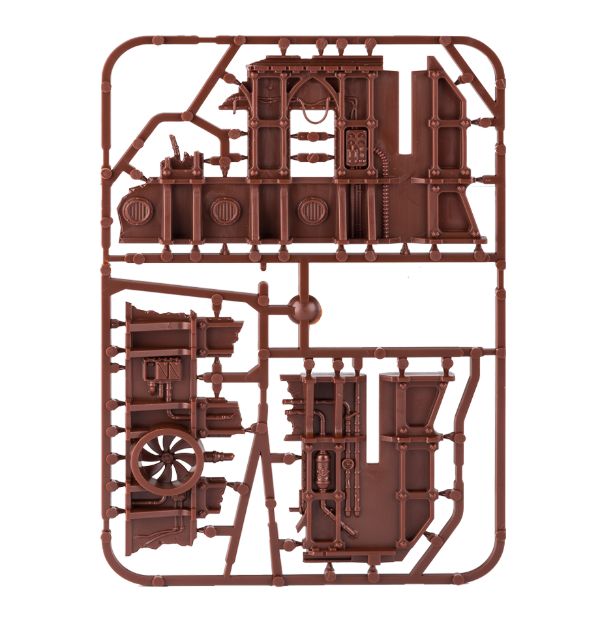 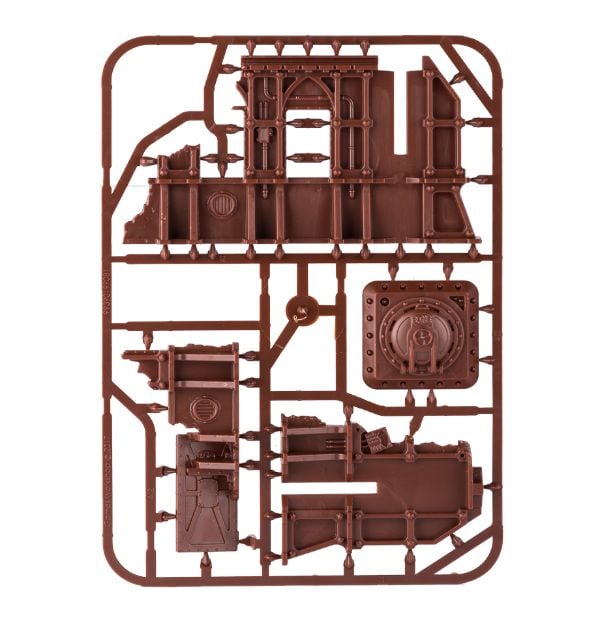 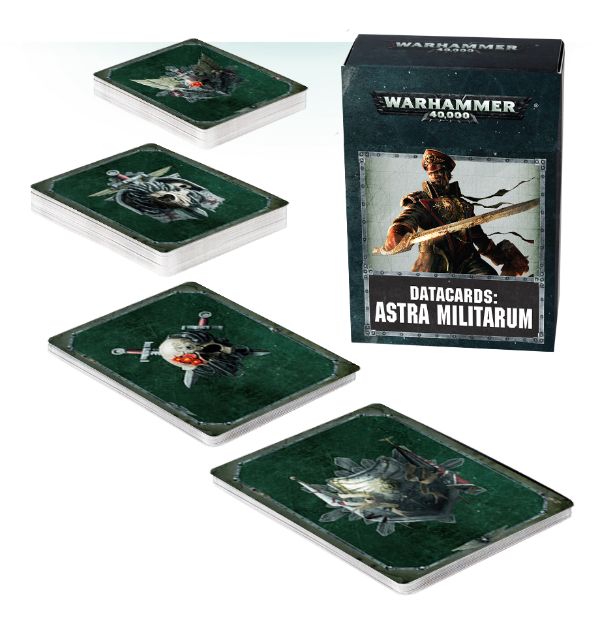 Designed to make it easier to keep track of Tactical Objectives, psychic powers and Stratagems in games of Warhammer 40,000, this set of 89 cards – each featuring artwork on the reverse – is an indispensable tool in the arsenal of any Astra Militarum gamer. Included: 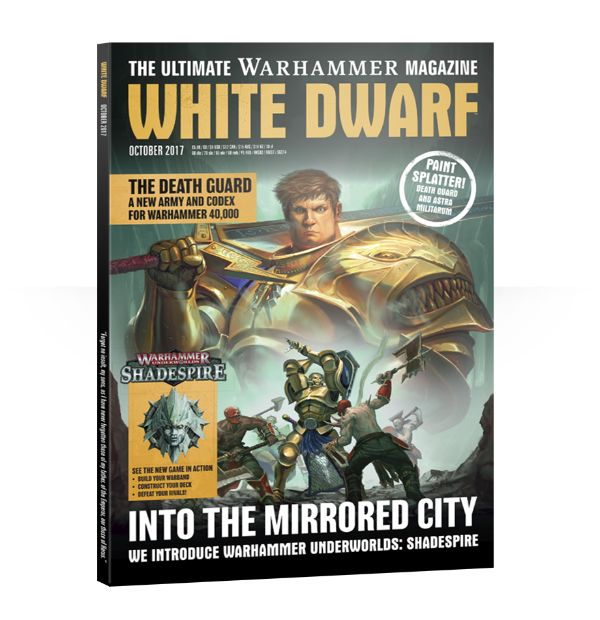 October’s White Dwarf is here and with it the brand-new Warhammer Underworlds: Shadespire game, not to mention our top tips on creating your own Space Marine Chapter, along with examples from members of the Studio’s ‘Eavy Metal team, Designers’ Notes on the amazing new Death Guard range, battle reports, Paint Splatter and much, much more.

Lorgar: Bearer of the Word (Hardback) $19 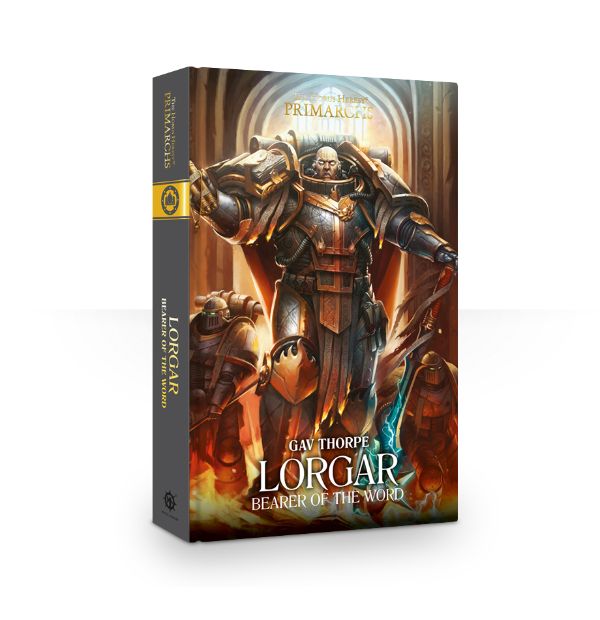 READ IT BECAUSE
We’ve seen Lorgar’s fall to Chaos and rise as the high priest of Horus’s rebellion, but for the first time, the full story of Lorgar’s time on Colchis and Kor Phaeron’s part in his childhood is told. 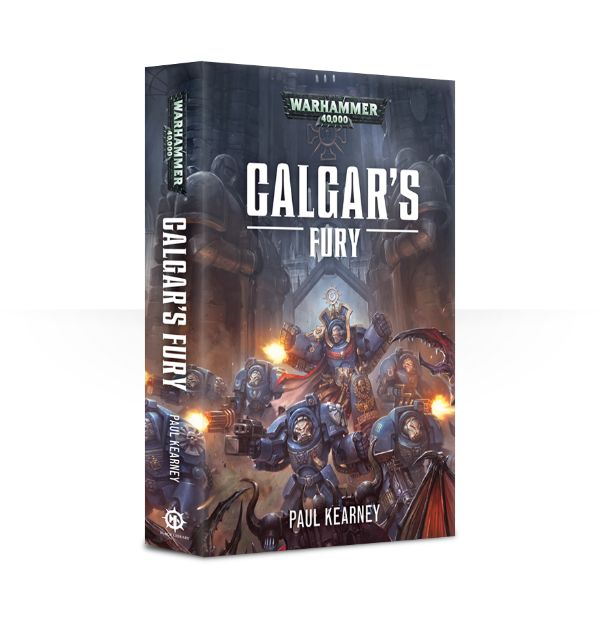 When an immense space hulk emerges into the Ultramar system, carrying with it the threat of something ancient and terrible, Marneus Calgar once again stands in defence of his realm.

READ IT BECAUSE
The Lord of Macragge returns to action in a classic Ultramarines style story – when there’s a space hulk with something deadly on board, who else are you going to call but the boys in blue? 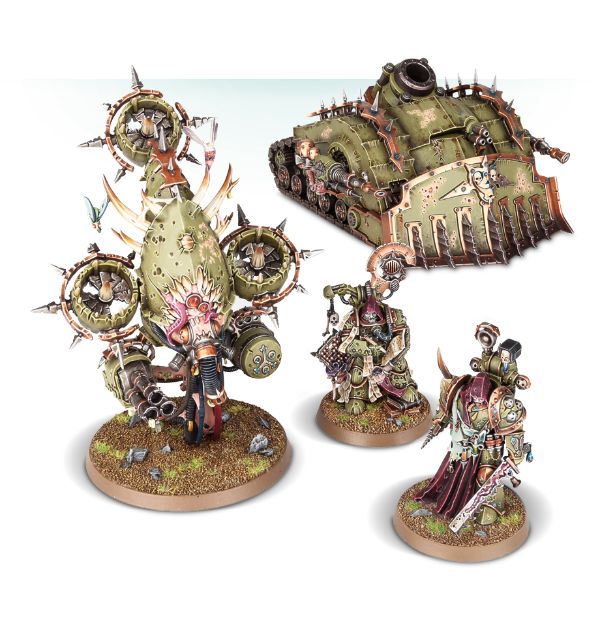 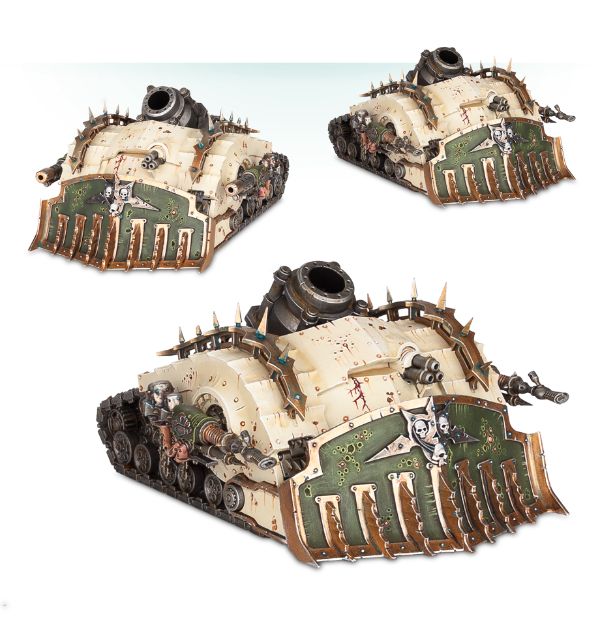 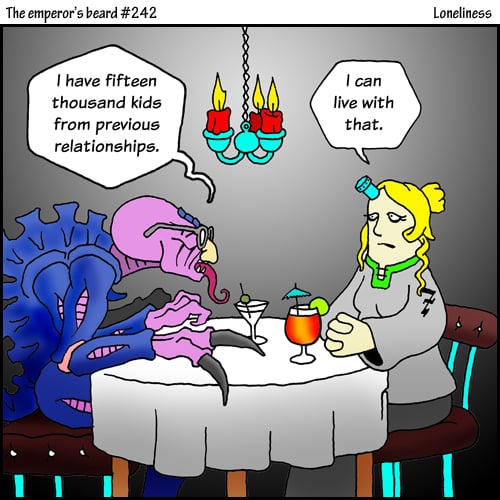