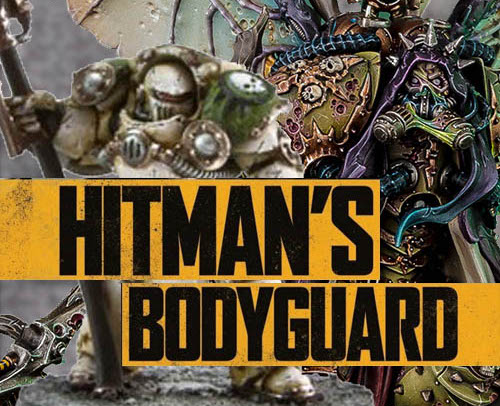 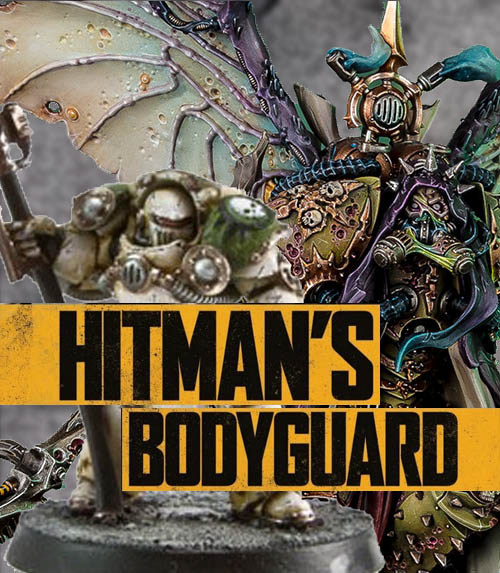 The Deathshoud Terminators are going to be the best Bodyguards in the game – These Meatshields bring the BEEF!

Mortarion’s elite Bodyguard are back and they are invaluable for keeping your Death Guard Characters in the fight and in line. The Eyes of Mortarion are upon you! Let’s dive into the Deathshround: 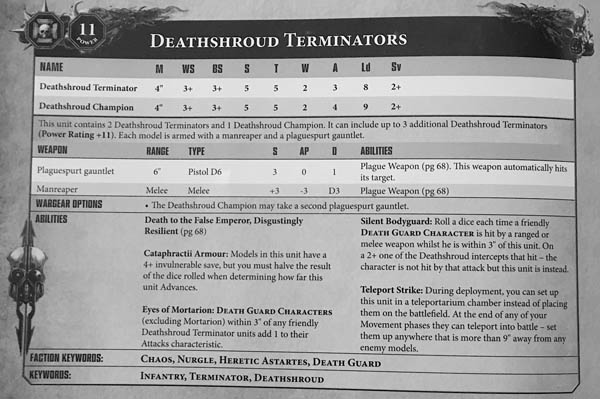 The Deathshroud have a typical “Nurgle Terminator” stat-line with some extra changes. First off, they only more 4″ – but that really won’t be a problem if you use Teleport Strike (see below). They hit on +3s for both shooting and assault. They are 5s for Strength and Toughness which is nice. They come with 2 wounds each and pack 3 attacks – not too shabby! Oh and that Cataphractii Armour grants them a +2/++4.

Each Deathshroud model comes standard with a Plaguespurt Gauntlet. They don’t have a long range and are only Strength 3 – however, they are Plague Weapons that can be fired while engaged and do D6 auto hits. You’re re-rolling to wound rolls of 1 with them and with the right things in place you could also do some pretty mean things with either extra Mortal Wounds or increasing your to wound rolls by 1. You might have to spend some command points to do so, but it would be worth it.

The Manreapers are where it’s at! Effectively Strength 8, you’re getting at least 3 swings with them which are also Plague Weapons so, again, re-rolling failed wound rolls of 1. And lets not discount that -3 AP either! If you can get the Deathshroud into close combat they should pull their weight – or at least slow your enemy down!

Death to the False Emperor and Disgustingly Resilient – We’ve seen these before but DR is really great on these guys in particular. We’ll see why below.

Cataphractii Armour – this one is for all you Heresy Era Fans! You can bust out your Forge World models for these guys if you want to and no one can give you any crap about it!

Eyes of Mortarion – Death Guard Characters get a nice boost to their attack characteristic. That might not seem like much, but on a big hitter like Typhus it’s something extra. Or if you have a Nurgle Daemon Prince as your Warlord and use the bonus attack trait from the BRB, you’ve got a pretty killy model marching downfield!

Teleport Strike – Who needs to walk when you can just drop in where you need to be. You could keep your Deathshround in reserve, allow Mortarion to fly up and then plop these guys behind him. Now Mortarion has at least a couple “extra tough extra wounds” to chew through.

This last ability however is what makes these guys so fantastic:

Silent Bodyguard: On a 2+ one of the Deathshroud intercepts that hit – the character is not hit by the attack the this unit is instead.

This is HUGE. Let’s compare that two a couple other Bodyguard units and let’s see if you can spot the difference: 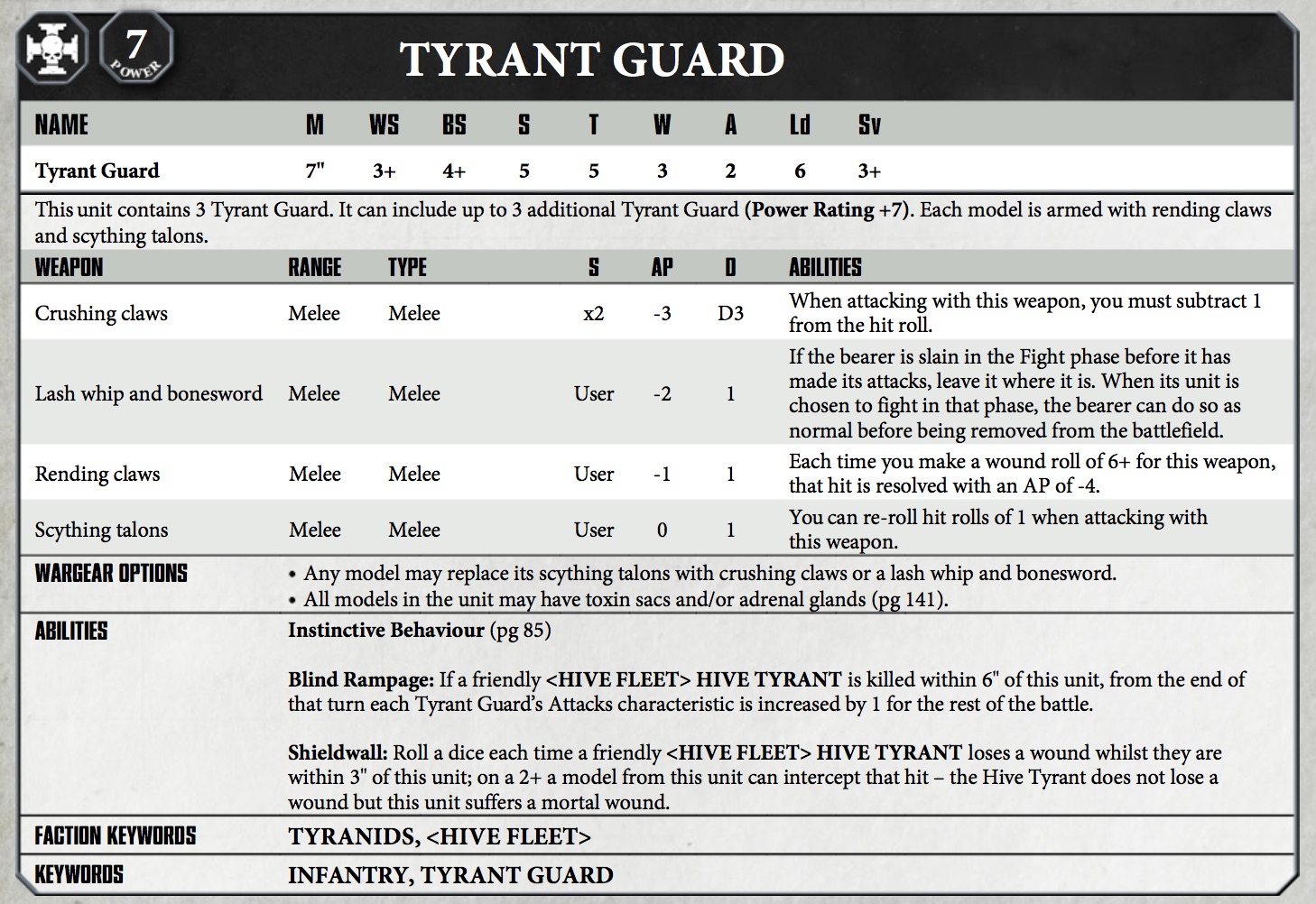 Tyrant Guard’s Shieldwall only focuses on wounds already lost and not the hit that causes the wounds. This might not seem like a huge deal, but that means if you shoot a Hive Tyrant with a Lascannon, you’re wounding vs the Tyrand and not the Guard. Plus the defender is rolling a +2 per damage caused, not on the failed wound roll. That means if you roll 6 damage, that’s 6 dice the defender has to roll a 2+ on vs 1 for the Deathshroud above. And because it’s Generating Mortal Wounds per die roll, that means those 6 dice are now killing 2 models vs just one (providing the defender rolls all 2+ on those dice).

T’au Shield Drones used to have a different (some would argue better) version of the rule. But now Saviour Protocols is different:

Again, this is passing off the successful wounds and not the hits. Those drones do not get their +4 invulnerable save and they just take a Mortal Wound. They are in a similar situation as the Tyranid’s Tyrant Guard as above.

Personally, I like the Deathshroud’s Bodyguard ability because it’s simple to understand. It triggers on “the hit” and not “the wound” step. It also makes sense thematically – the Bodyguard takes the hit! I really hope for all “Bodyguard” units in the future this is how the rule works.

These guys are pretty pricy in both Power Level and Points – a squad of 3 can clock in around 200-250 points depending on how you load them up. But if you need to keep your character alive they are pretty much the best option for that.

What do you think of the Deathshroud? Would you want them to have your character’s back?

Author: Adam Harrison
Writer, Editor, Texas Native, and Austinite for 15+ years, Adam covers all things Tabletop Gaming. Which includes Warhammer 40,000, Age of Sigmar, D&D, Board Games and everything else that involves dice, boards, cards and a table. A hobbyist, player, and collector of miniatures and games, Adam's current obsession are his Death Armies for Age of Sigmar, his Blood Angels and Tyranids for 40k, and his ever growing Arkham Horror: The Card Game Collection.
Advertisement
Chaos Marines Death Guard Games Workshop Rules Warhammer 40k
Advertisement