Content from the DMs Guild Adepts is getting approved for Adventurer’s League Open Play, check it out.

That’s right. All of that alphabet soup in the title was more than just a reminder of the days when a cylinder of sodium and letter-shaped carbs served up with grilled cheese was both nutritious and nourishing–the perfect remedy for what ailed you, if you can believe that–but now you have to work a little harder to get those simple pleasures (though you still do, ordering your freshly made bistro-style soup and grilled cheese with gruyere, plus c’est la même chose as they say*); it’s ALSO a notification that those of you playing in the Adventurer’s League have got some new options and adventures to play around with. Take a look. 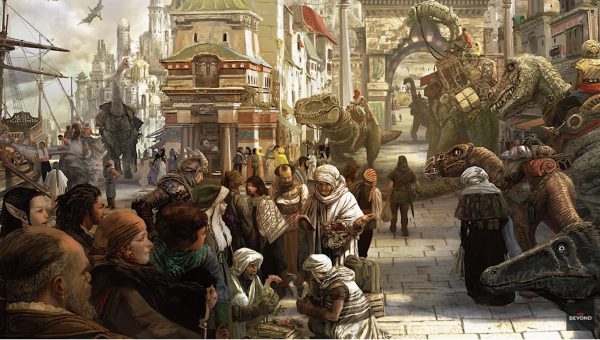 Our first round of Guild Adept content is now available for play in the D&D Adventurers League. This includes the following titles…

BEASTS OF THE JUNGLE ROT

HEART OF THE WILD

RETURN OF THE LIZARD KING

There are a few caveats however…

BEASTS OF THE JUNGLE ROT

Players can use the living dinosaurs presented as animal companions, for polymorph, wildshape, summonspells, or basically anything that is “choose an animal,” etc.

The Heretic background is allowed, but use of the Entropy domain requires campaign documentation.

RETURN OF THE LIZARD KING

Two new magic items are presented therein… a darkling necklace and tree spirit weapon. These are to be replaced with a cloak of elvenkind and a +1 weapon appropriate to the story of the adventure. That said, if you happen to be lucky enough to play this adventure with Shawn Merwin (author), Shawn will have certificates for the new magic items as published.

NOTE: Shawn is limited to run this adventure once per convention/event for this purpose. The content of chapters IV, V, and VI (including backgrounds) are not permitted in DDAL play.

Basically you’ll want to keep an eye out for special opportunities to get that “campaign documentation” which you can primarily get at conventions/special adventures and the like. With all of the events that are around the corner especially for the Extra Life day of gaming, I’d be shocked if we don’t see some opportunities to get some certs to take these new character options out for a test drive real soon.

At any rate, these products all sound pretty cool, I haven’t had a chance to check out all of them in-depth, but they’re basically given the Gold Star by WoTC to try and say, ‘hey these add to the game in a meaningful way,’ so if you’re looking to expand your Tomb of Annihilation campaign, these are a great place to start. Each of these adds something to that campaign, whether it’s new monsters, like in Beasts of the Jungle Rot, or a more in-depth look at locations in the unexplored regions of Chult. Also many of them kind of play off of the others, so you can find the extra dinos from the Beasts of the Jungle Rot in Ruins of Mezro, for instance. Let’s run through them briefly, so you can see what you’re in for. 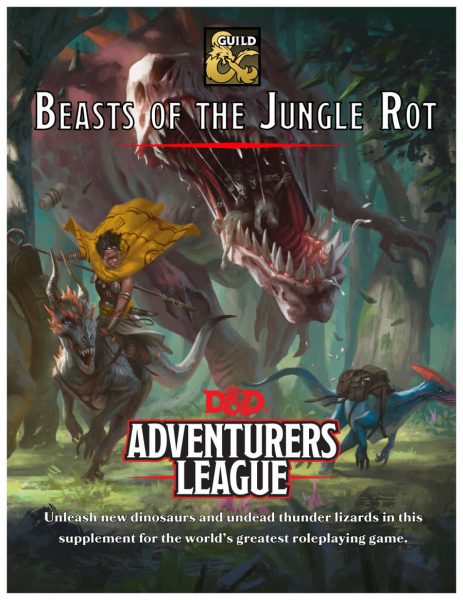 No Tomb of Annihilation campaign is complete without this collection of more thunder lizards… and more zombie thunder lizards! Behold new dinosaurs, including the legendary giganotosaurus and titanosaurus, and new zombie dinosaurs with terrifying and unique necrotic abilities!

Plus expanded rules for random encounters, dinosaur races, and hunting dinosaurs for hides and eggs.

Volo’s Guide to Dinosaurs, basically. The first time I read this, I thought they meant it had rules for dinosaur player races, but upon further reflection, I think it’s rules for dinosaur racing. At any rate, this one engages with the best part about the new Tomb of Annihilation: the dinos. 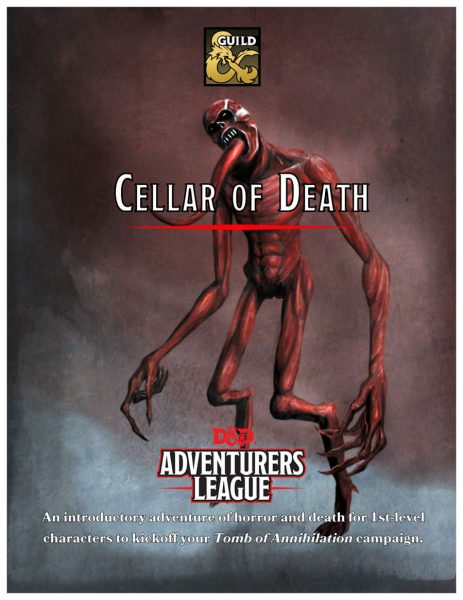 Something evil is devouring the souls of the living in Chult, but before the characters take on the horrors in Tomb of Annihilation, they must first uncover the death curse’s origin by braving a lich’s tower in the Cloakwood. This introductory adventure is designed for a party of four to six 1st-level characters, who should advance to 2nd level by the adventurer’s conclusion. It is a prelude to Tomb of Annihilation that should take about 2 to 3 hours.

This product includes Fantasy Grounds files for the adventure.

Alright, I really like this one. It gives a little more context for how everyone ended up in Port Nyanzaru. One of the premises of the Tomb of Annihilation is that they’re sent off in search of the cure for this death curse, that everyone from the Harpers to the Red Wizards has somehow tracked to Chult. Well Cellar of Death is all about how the Harpers discover it. It’s a really cool idea (AND a fun adventure) that is great for just situating the campaign. But also it’s a fantastic example of how to handle high-level things being in the world without needing high-level characters to interact with them. The characters brave a lich’s tower, and liches are no joke at CR 20, but this s very much a 1st-level adventure. Definitely worth checking out. 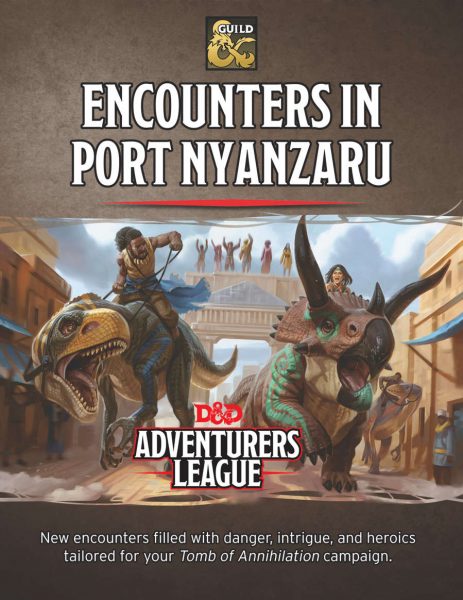 Thirteen new encounters in the port city of Chult that can be added to any Tomb of Annihilation campaign! Combat, danger, intrigue, and pulp are all yours in this exciting supplement! Welcome to Port Nyanzaru, a port city on the edge of Chult’s jungle that promises untold adventure, fortune, and danger!

I’ve got to admit, I’m real curious about the Chase Complications and those suspicion rules. One of the big risks of adventuring in Port Nyanzaru is that if you run afoul of the Merchant Princes you could get sentenced to Executioner’s Run, and I for one would love to see how this helps get PCs there. 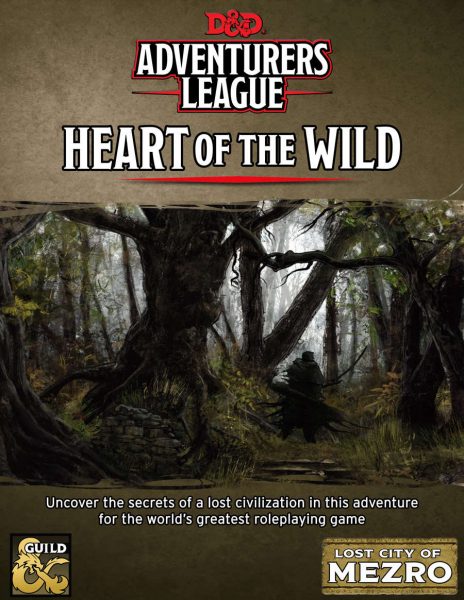 A group of adventurers is tasked to uncover the truth behind a mystery that lies deep within a forgotten sanctum, one protected by those who still practice the old teachings of Chultan magic.

Failure may crush all hope for one of their allies, while success may also bring upon the wrath of an ancient order of zealots. Can the party solve the mysteries of the forest temple before they are overtaken by the fearsome Mage Hunters?

Heart of the Wild, a D&D Adventuer’s League adventure for character Levels 5-10, expands upon one of the adventure storylines first encountered in the Tomb of Annihilation™ hardcover. It can be played on it’s own, as part of the hardcover adventure, or as a follow up to the ToA campaign. It also features an introductory history of the Mage Hunters, one of the sacred orders of Mezro.

This module is the first of the Lost City of Mezro series of adventures, written for the DM’s Guild Adepts line of products. Included in this series is the Ruins of Mezro setting book, by Will Doyle.

This has all the makings of an adventure path type of thing, which is a real intriguing step for the DM’s Guild to take. So if you really enjoyed exploring Chult and are craving more of that pulpy fun, check this one out. 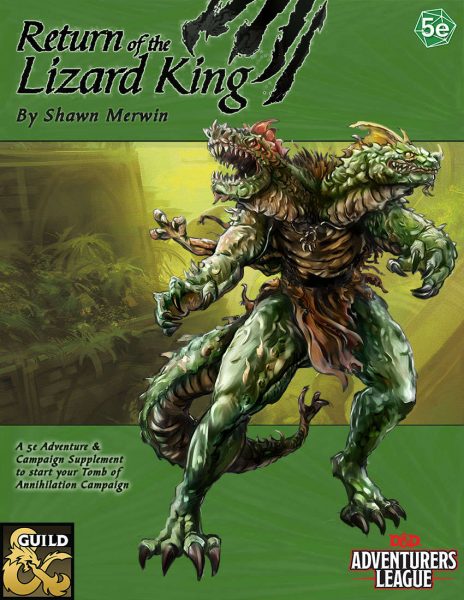 In Chult’s Valley of Dread, warring tribes of lizardfolk have kept each other in check for centuries. As the tribes slowly fall under the sway of a new leader, omens point to the return of an ancient threat: the demon-spawned Lizard King. Adventurers from a far-away realm find themselves in the middle of the fray. Their heroics could save the land from terrible evil, or it might play a part in bringing about doom!

Return of the Lizard King is a D&D Adventurers League legal adventure for characters level 1-4, playable as a lead-in to Tomb of Annihilation or suited to launch your own Chult-based campaign. Report your players’ decisions, and see how they affect a forthcoming high-level adventure in the same setting! The adventure also includes two new playable races (the wilden and the Chultan lizardfolk), class archetypes (the druid’s Circle of Reaping and the cleric’s Survival domain), backgrounds, feats, spells, magic items, and more than 20 new monsters designed specifically for this adventure, for a Chult campaign, and for Tomb of Annihilation.

This one just illustrates how much potential Chult has for adventure. Like we said in our review, one of the best things about the Tomb of Annihilation is that it’s not just about the story of finding and dealing with the death curse–it’s about exploration. It’s about sidequests. It’s about all of the things that make D&D…D&D. And this is a fantastic example of it, especially since the author is going to take your input and change things in the future. 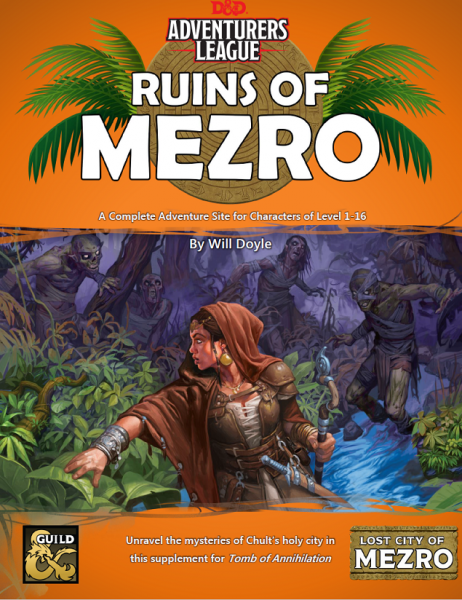 Ancient Mezro lies silent and ruined, her treasures plundered by foreign explorers. Flaming Fist mercenaries have staked their claim to the site, but they aren’t the only ones seeking to unravel its hidden mysteries. Other, darker powers have set their sights on its secrets…

Ruins of Mezro is a complete Dungeons and Dragons adventure site for characters of level 1-16, providing everything you need to run freeform adventures in the ruined jungle city. If you’re running Tomb of Annihilation, this supplement provides alternate intro adventures to the campaign for tier 1 and tier 2. Ruins of Mezro is also compatible with the Lost City of Mezro series of adventures set in and around Mezro. Be sure to check out the other adventures in this series by Rich Lescouflair.

Ruins of Mezro was created by Will Doyle as part of the Guild Adepts program, with additional design from James Introcaso and Ruty Rutenberg. Will has contributed to both Tomb of Annihilation and Storm King’s Thunder, and is the author of several adventures for Dungeon magazine and the Adventurers League program, including Cloaks and Shadows and Outlaws of the Iron Route.

Chult keeps getting bigger and bigger. This one’s done by one of the authors on Tomb of Annihilation, so it’s probably going to feel pretty on-brand. 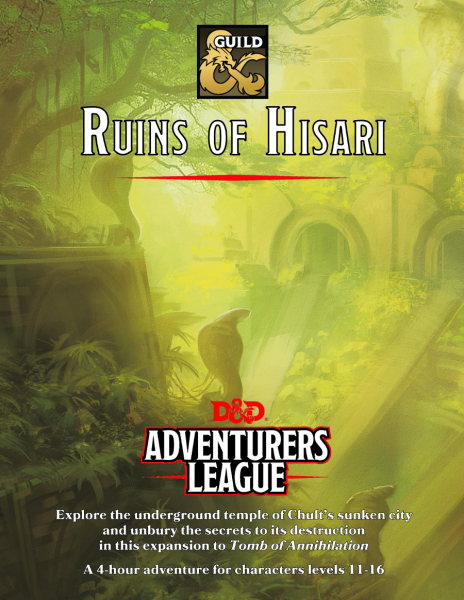 SOMETHING happened in Hisari. But no one knows what. Hidden in the jungles below the fuming volcano of the Sky Lizard Mountains lie the ruins of Chult’s once mighty yuan-ti city, forgotten, abandoned and swallowed by the earth, surrounded by a magical ward that terrorizes all yuan-ti that dare return. Explore the underground temple and be the first to unbury its secrets… if you survive to tell the tale.

“Ruins of Hisari” is a 4-hour adventure for tier 3 characters levels 11-16 (APL 12) and can be played as an expansion to Tomb of Annihilation or as a standalone adventure. This adventure is permissable for D&D Adventurers League play!

I am excited to see more and more of these high-level adventures make their way through the filter. Especially since this one talks about the Yuan-Ti and their dark city. For those of you who love ancient ruins and mysteries (like me) this seems like the perfect way to cap off your Tomb of Annihilation endeavors. 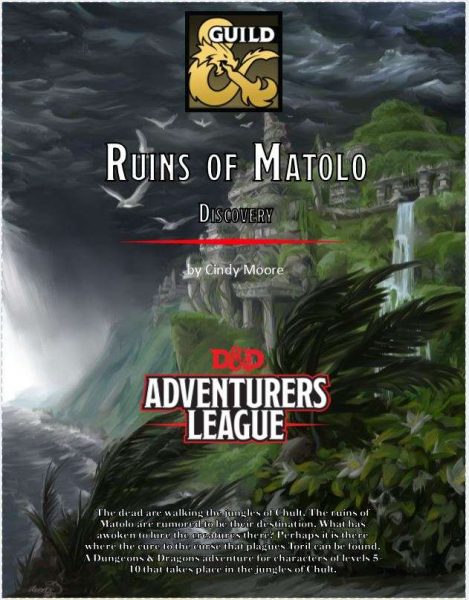 The dead are walking the jungles of Chult. Adventurers are needed to fend off the savages. In the process something long forgotten is rediscovered. Will their pleas for help be heard from The Creator of Chult? A Dungeon & Dragons adventure for characters of levels 5-10.

Whew, that was a long one. Still with me? Guess it’s time to get back to the Tomb of Annihilation then. Together we’ll surely be safe.