FFG: Legend of the Five Rings In Stores Now

Welcome to Rokugan–a land where honor is stronger than steel. The Legend of the Five Rings is now available in stores!

That’s right friends, the Legend of the Five Rings is now available in stores. Tell the skeleton that lives inside you to work its magic and make your fleshy body get up out of the house and down to the stores so that you too can pick up the Legend of the Five Rings. We’ve talked a lot about L5R here on BoLS before–we’re big fans. Mantis clan, best clan, and all that. But seriously, this LCG is well put together; it’s got a pretty swanky amount of depth and gameplay along with all the ongoing story developments you can expect from an LCG. Don’t worry about collecting all the cards, it’s easy to get whatever you need to build the deck of your choice–whether it’s a House Scorpion Tempo deck or a Crab Endurance deck, you’ll be able to wade into open conflict with the other great clans of Rokugan. Take a look inside the box below.

There’s more coming out already. In addition to the base game, you can pick up the new expansion as well–it introduces several cards to expand the roles of the Clans, giving them some sweet new tricks they can pull. Crane, in particular, has some dirty that let them control the state of the board, so be careful if you see some of their courtiers in play. That’s one of the things I like about the game though–none of the Clans feel so powerful that the others can’t stop them. And there’s a little flexibility within each of the Clans, so you can find different “builds” that can shake things up a little bit. At any rate, we’re big fans here at BoLS (and we hope to bring you a livestream of the game sometime soon), so if you like Samurai action and card chaos, you should check it out. 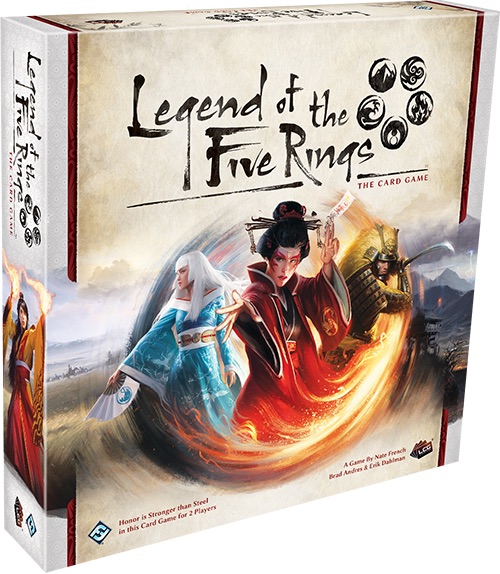 Choose your clan. Fight with Honor. Add your name to The Legend of the Five Rings!