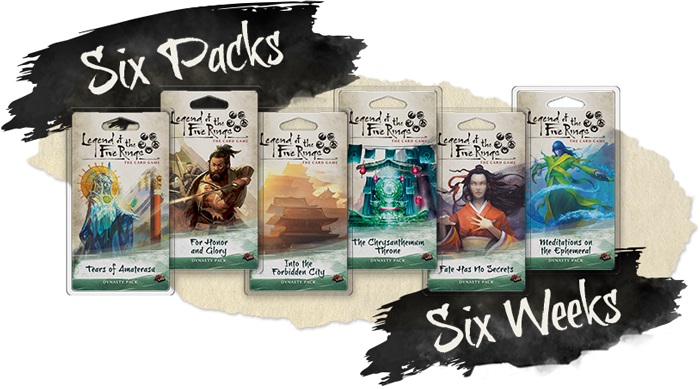 In an unprecedented move, FFG is really ramping up their L5R release schedule by an order of magnitude. Their new releases plan will have the entire First Dynasty Cycle drop within weeks after their first World Championship in November.

Rather than releasing one Dynasty Pack per month over a period of six months, the release schedule for the Imperial Cycle will be compounded and concentrated into a shorter period of time. Beginning in early November, one Dynasty Pack will be released every week for six weeks. During this special event, the meta for Legend of the Five Rings: The Card Game will evolve rapidly, potentially allowing new and exciting deck archetypes to rise to prominence in a matter of days. In addition, the tales of Rokugan told through the fiction included in each Dynasty Pack will see the story of the Imperial Cycle advance from week to week.

This is a LOT to take in. To set the stage, let’s talk about a typical FFG release for one of their LCG (Living Card Games). For their previous products, they have announced a Core Set followed up by the first pack in the Cycle of cards. A Cycle is a block of around 6 expansion packs that all share a common theme, story elements, or mechanics. There are also “deluxe” expansions that come out, typically after a Cycle is complete, that kick start the next Cycle’s arc.

The typical release window can take months to unfold. Typically, we’ll see an Expansion pack every month (if we’re lucky) for a game, and a new “deluxe” expansion ever 3-6 months depending on how fast the Expansion Packs are coming out.

With this new L5R release – FFG has hit the warp speed on the release window. The current plan is to push out the entire Imperial Cycle (they always name Cycle something that fits the game/theme) in six consecutive weeks. Players won’t have to wait for months to have the first Cycle of cards – by Christmas the will be able to dive right in and start experimenting with the entire Cycle! 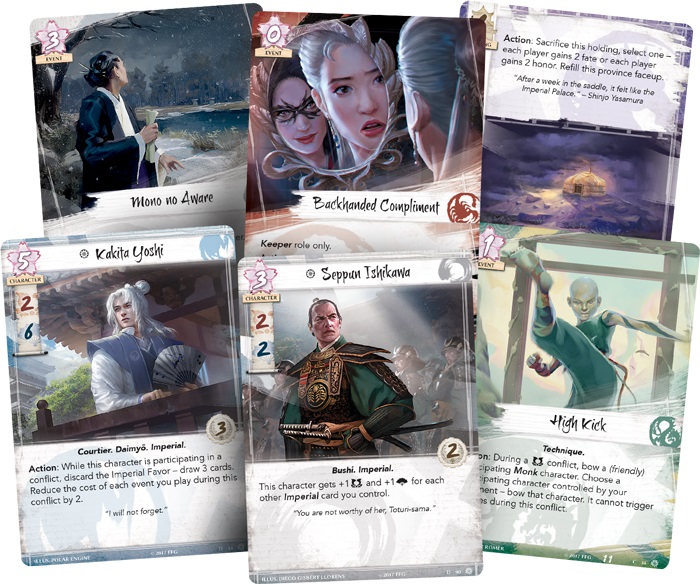 The World Champs is set for November 1st-3rd. After that this rapid fire release schedule kicks off. L5R players are going to have to quickly evaluate and shift with the game if they want to remain competitive. The good news is that all of these Packs typically come with player sets for all the cards you will need – so if you only want to build a single deck, you’ll only need to pick up one copy of each set. However, if you’re really into deck building and want to run multiple sets in different deck you’ll need multiple packs.

Personally, I’ve always been more of a casual/collector player – so one pack a week sounds awesome. However, there are folks who feel like this is just a ploy to cash in on the massive success of L5R. With Core Sets selling out quickly the more cynical folks are wondering if perhaps the rush to get all six Packs out is just a way for FFG to strike while the iron is hot. Some of the more competitive crowd have pointed out that having the first 6 packs from the Cycle drop within weeks vs months will help stabilize the game and make it more appealing to the competitive scene.

I think they both have a good point. I can’t really fault FFG for wanting to make money (they are a business) but I’m also glad that an entire cycle for a new game will be out by Christmas! I wish some of the other games would get the same treatment…

If you’d like to see more of the cards or read further about the announcement hop over to FFG’s site and read the full article HERE. The Imperial Cycle starts it’s Six Week Sprint sometime after Novermber 3rd!

An entire cycle in 6 weeks? That’s…Madness! No – it’s Rokugan!

Author: Adam Harrison
Writer, Editor, Texas Native, and Austinite for 15+ years, Adam covers all things Tabletop Gaming. Which includes Warhammer 40,000, Age of Sigmar, D&D, Board Games and everything else that involves dice, boards, cards and a table. A hobbyist, player, and collector of miniatures and games, Adam's current obsession are his Death Armies for Age of Sigmar, his Blood Angels and Tyranids for 40k, and his ever growing Arkham Horror: The Card Game Collection.
Advertisement
Card Games FFG - Fantasy Flight Games Legend of the Five Rings Tabletop News
Advertisement