Stranger Things Lands On The Tabletop In An Unexpected Way 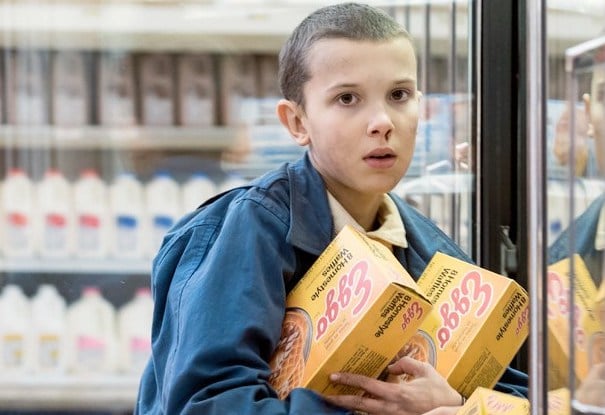 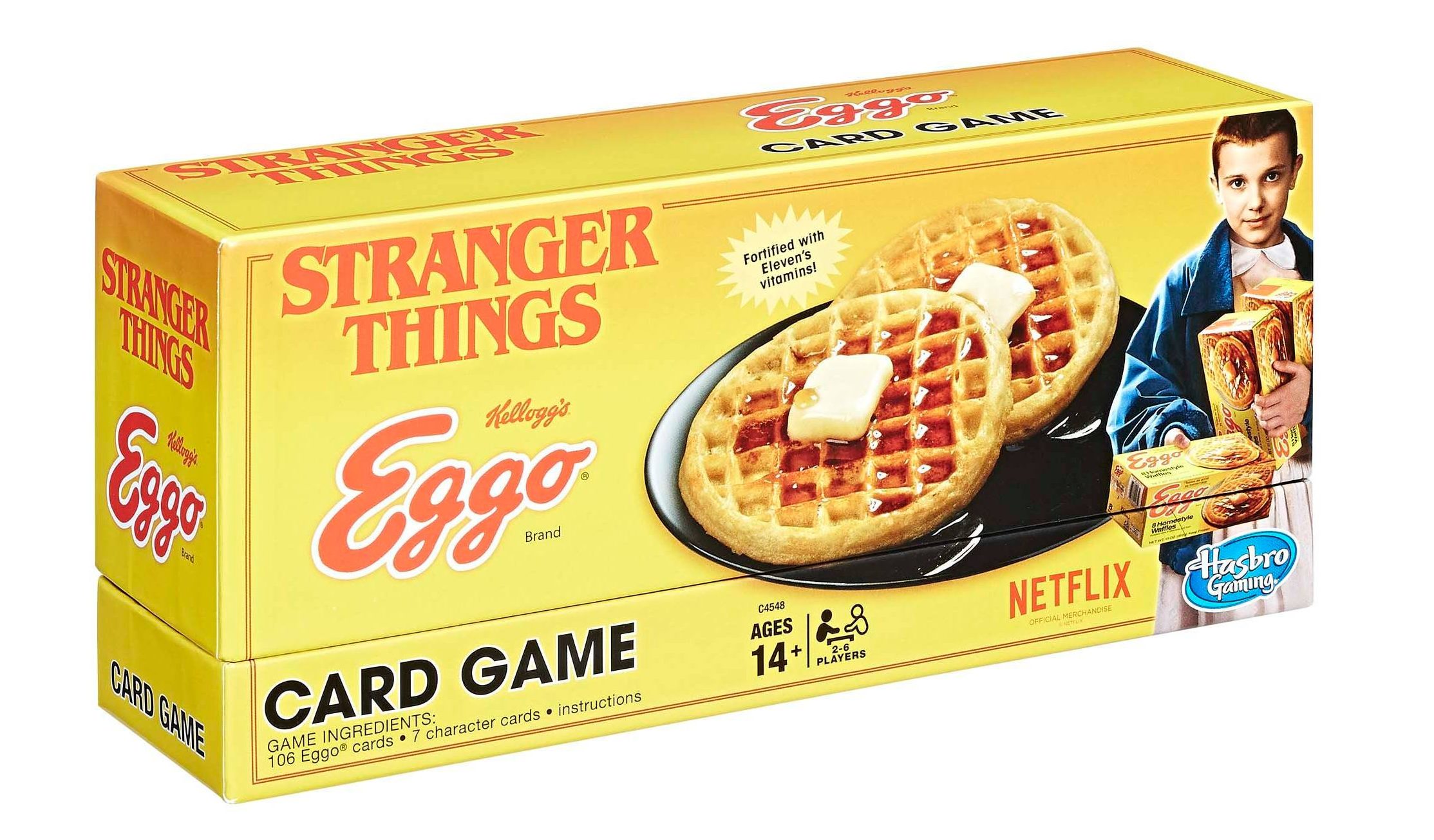 Prepare for Stranger Things season 2 with the Netflix, Hasbro and Kellogg boardgame team up we’ve all been waiting for… ….wait, what?

Hasbro has released several games under the theme of Netflix’s popular sci-fi show, Stranger Things. A retheme of Monopoly finds players traveling and buying up properties and locations around Hawkins. Which, in itself is definitely a strange thing, considering you can buy Steve’s Pool. 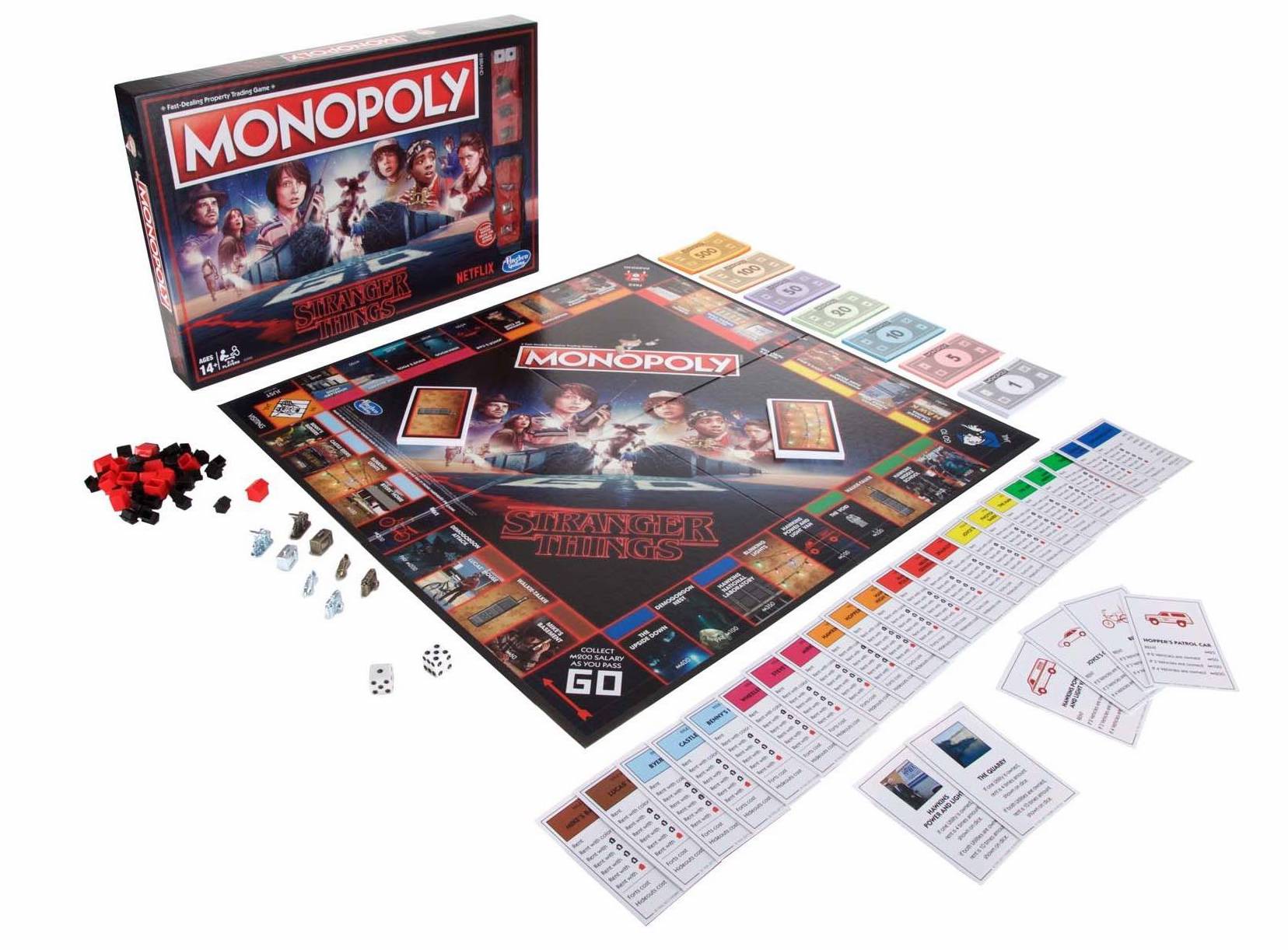 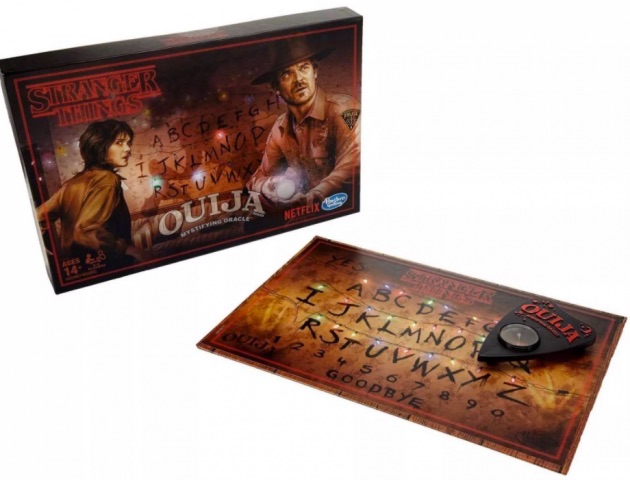 Showing the Christmas lights Joyce hangs to communicate with Will, this Ouija board uses the same method of sending a message as they did in the show. This retheme makes so much sense I’m shocked it took anyone this long to think to release it.

We wrap up Hasbro’s collection with an admittedly confusing entry. The Stranger Things Eggo Card Game appears to be similar to Uno, but with some differences. Players can play as either Will, Mike, Lucas, Dustin, Eleven, Hopper or Barb. Players begin with 5 cards, in the shape of Eggos, and each turn play a card. Card effects seem to coincide with the Uno standards such as Draw 2 or reverse turn order. But Stranger Things Eggo Card Game also gives players options like send other players to the Upside Down or Summon the Demogorgon. Players must escape the Upside Down and get rid of all their Eggos (why would you even do that?) to win the game! 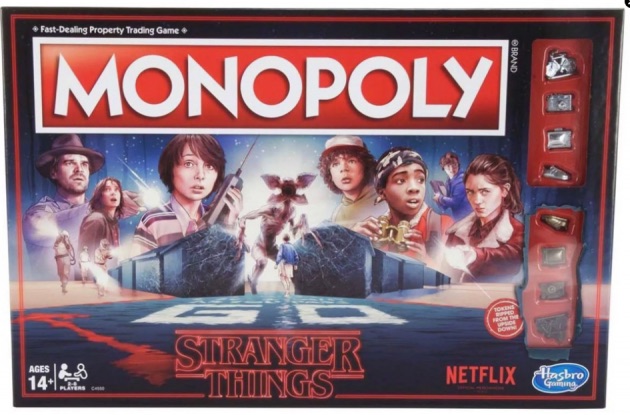 In this Monopoly game inspired by the Netflix Original Series, Stranger Things, Will Byers has gone missing. Players choose an 80s-inspired token or one “ripped from the Upside Down” to move around the board trying to find him. Pretend to search the town of Hawkins and buy, sell, and trade locations and vehicles from the show. The game includes Walkie-Talkie and Blinking Lights cards, replacing Community Chest and Chance cards, while Forts and Hideouts replace houses and hotels. Who will win the game and avoid getting trapped in the “Upside Down?” 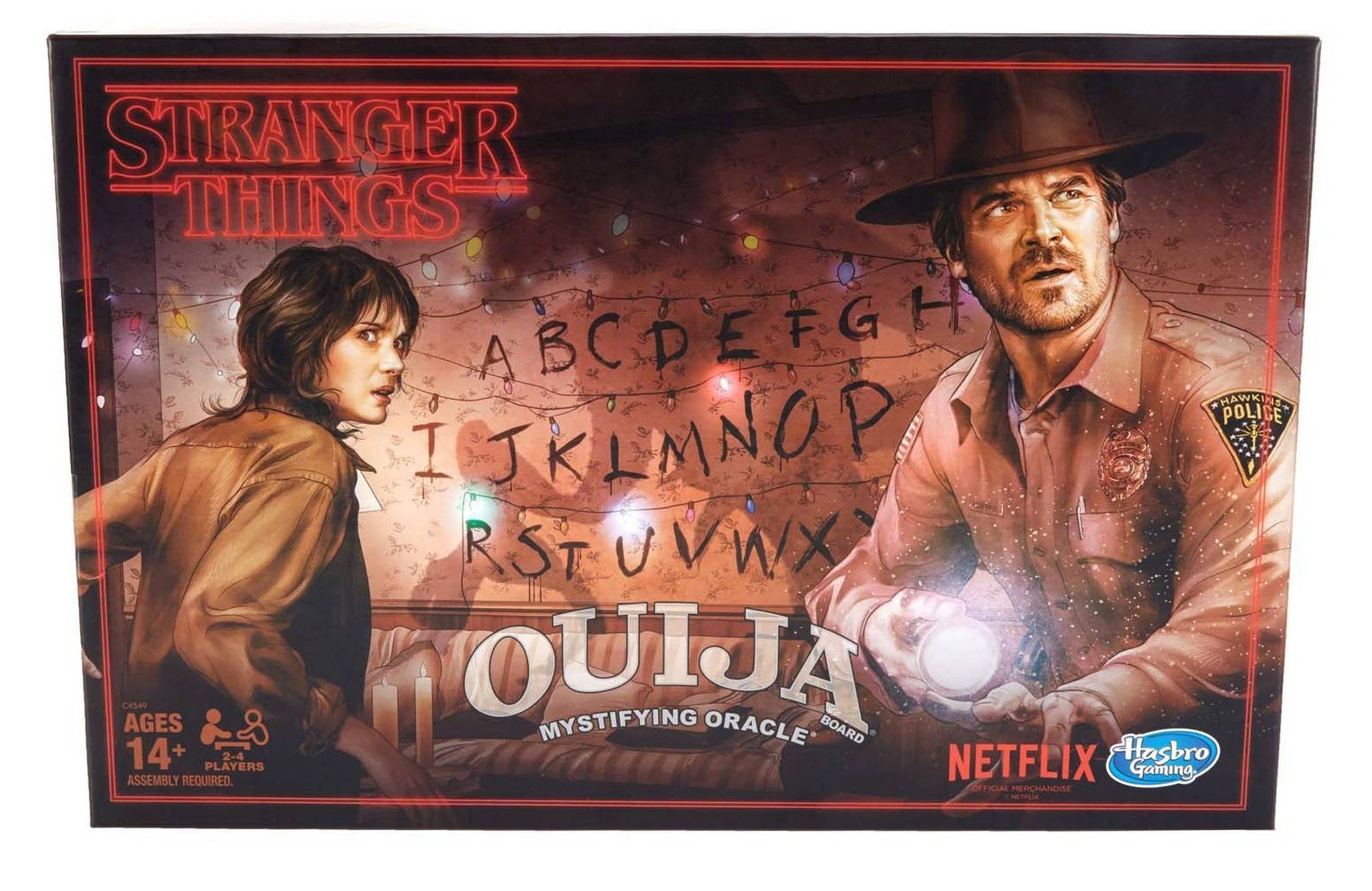 Gather around the Ouija: Stranger Things Edition game, if you dare, and unlock secrets from a mysterious and mystifying world of the Upside Down. Inspired by the Netflix Original Series, Stranger Things, this game board features the alphabet spelled out with Christmas lights like in the iconic light wall scene from the show (board does not light up). Summon the courage to ask the Ouija board questions about what happened in the Upside Down, as well as anything else you’d like to know. Will the planchette spell out the answers that you seek? Handle the Ouija board with respect, and it won’t disappoint you! 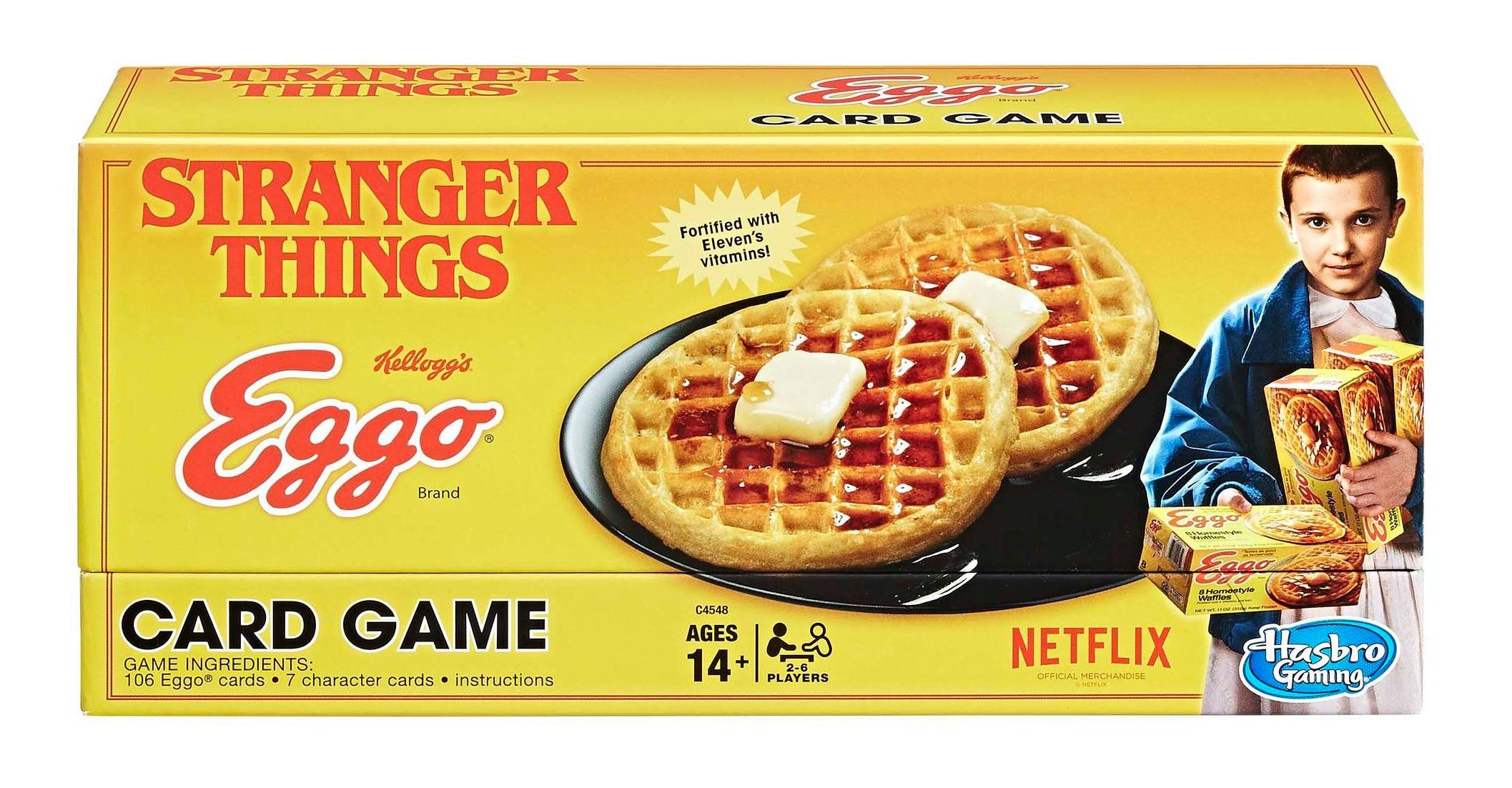 Play as one of the characters from original Netflix series, Stranger Things in the Stranger Things Eggo Card Game! Play as Will, Mike, Lucas, Dustin, Eleven, Hopper or Barb! Each card played can either send a player’s character to the upside down, make an opponent draw 2 cards, reverse the order of play, summon the Demogoron, or cause a rift that sends everyone who was Right Side Up to the Upside Down, and vice versa! Players must escape from the Upside Down and get rid of all their Eggo cards before the Demogorgon attacks. Succeed, or be toast!

What do you think of the Eggo Card Game? Has science finally gone too far?