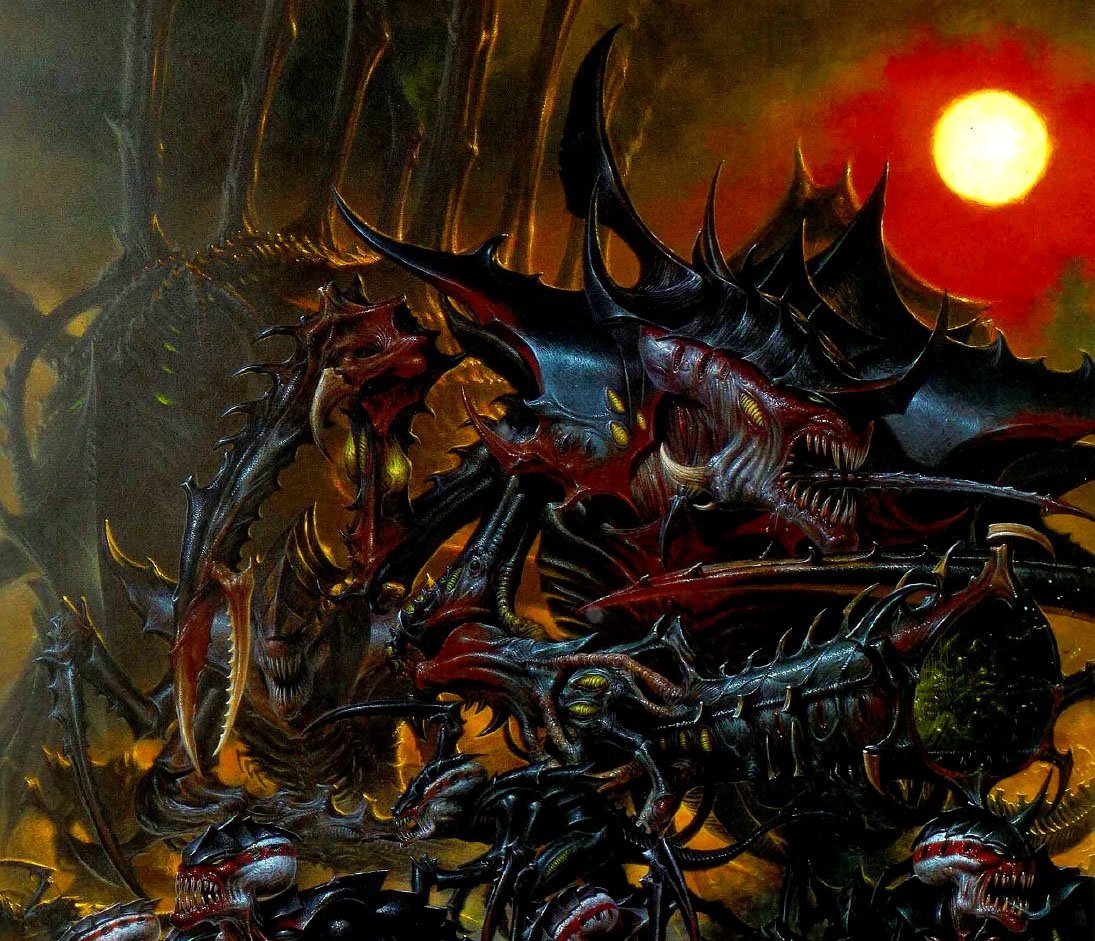 Today Loremasters we study the dark fate of worlds lost to the Tyranid Hivefleets.

In the process of assimilating a planet’s biological and inorganic materials, the most important stage is the location of a suitable target. One method by which they accomplish this is the spectral analysis of distant stars to determine their likelihood of supporting life. However, the fastest and most common method is the use of vanguard organisms, millions of which range hundreds of light-years ahead of each Hive Fleet, investigating each star system they encounter for signs of life. Once a suitable world has been detected, these bio-vessels spawn infiltrator-organisms, such as Lictors, Genestealers, or specialized Gaunt strains, and launch them onto the world via Mycetic Spores. Once inserted, these organisms will seek out all life and target those of a highly-organized nature, such as humans, restricting themselves to lone targets so as to avoid revealing their presence. Genestealers in particular will seek to infiltrate communities and create cults, not only to signal the planet is ripe for consumption but to weaken its defenses against the Hive Fleet’s arrival.

As the psychic beacon of the infiltrator-organisms flourishes, indicating a rich feeding ground, so does the Hive Fleet home in on it, in the process cutting off all interstellar communications as the Shadow in the Warp blankets the target system. Upon arrival to the planet, the Hive Fleet will disperse within the planet’s upper atmosphere and begin launching millions upon millions of Mycetic Spores. Many will contain Tyranid warriors of various strains, from Rippers to Bio-Titans, and so come in a multitude of sizes. Others will deliver zoomorphic symbiotes and parasites, which target and mutate the planet’s flora at a rapid rate. Within hours verdant forests are replaced with highly-aggressive alien vegetation, including Capillary Towers, which begins the process of transforming the planet’s atmosphere into a hothouse, turning the sky a sickly red and raising temperatures at an accelerating rate. Other spores are nothing more than giant cyst-bombs, filled with viral and poisonous organisms which burst over population centers, killing millions of people in the opening hours of the attack. Each one will cover an area many hundreds of meters across with acidic digestive bile, starting the process of future ingestion. 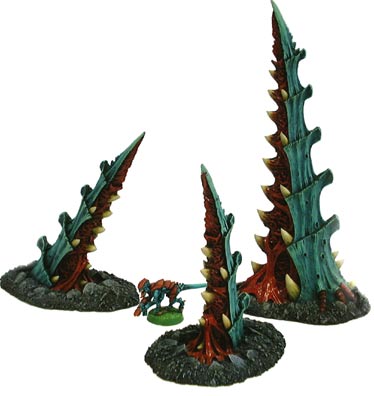 After the initial attack, vast swarms of flying Gargoyles will herd the native population into the path of fast-moving hordes of Gaunts to be viciously slaughtered. The defenders, often underestimating the Tyranids’ intelligence, make fighting retreats to buy themselves time to regroup from the onslaught, only to be encircled and destroyed as it becomes apparent they were merely herded into prepared killing grounds. These last pockets of resistance will become the targets of larger Tyranid species, from Warriors to Carnifexes and Bio-Titans, which eradicate the defenders with sheer offensive power.

With resistance ended, consumption of the planet’s resources begins. Bacterial agents and vast tracts of feeder organisms, pupated from the carcasses of native life forms, ravage the landscape of every ounce of biological matter before being collected into Reclamation Pools, where the matter is rendered into a thick, nutrient-rich gruel. This includes all mutated plant-life, which has finished altering the atmosphere into an oxygen-rich environment, and any infested organisms, who march blank-faced into pools’ depths to be consumed by the Hive Fleet. As the digestion pools swell, the Hive Fleet’s ships cluster in low orbit as vast capillary towers emerge to link with proboscis-like feeding tubes and pump the biomass into them. The final stage of the harvest is the consumption of the world’s atmosphere and seas, with vast drone-ship haulers descending to low orbit and sucking up every useful element left. Eventually the Hive Fleet will depart, having left the world a desolate airless rock stripped down to the molecular level, to begin the consumption process on another world. 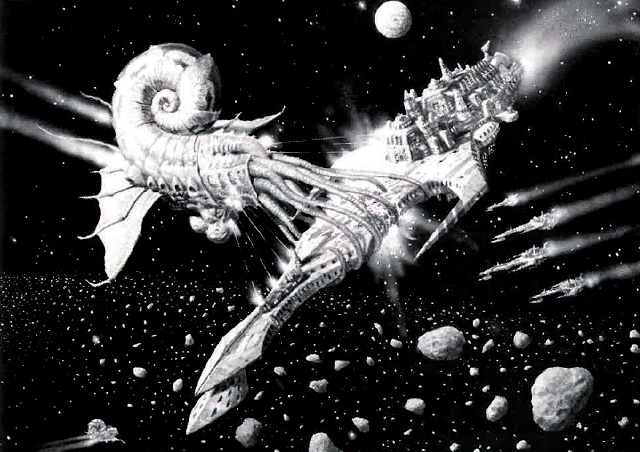 Learn More of the Tyranids 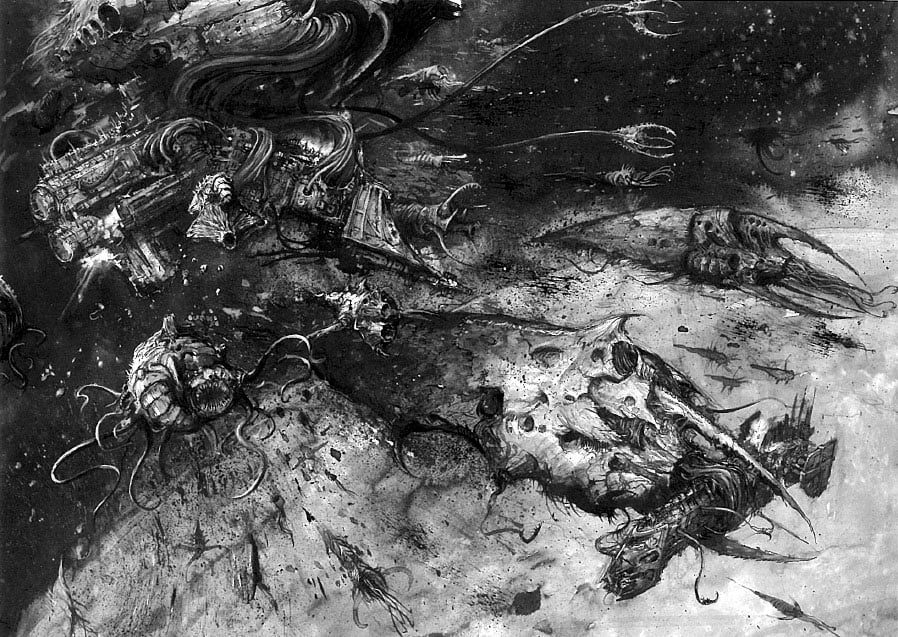 ~Offer up prayers to the Emperor for those lost to the Great Devourer.