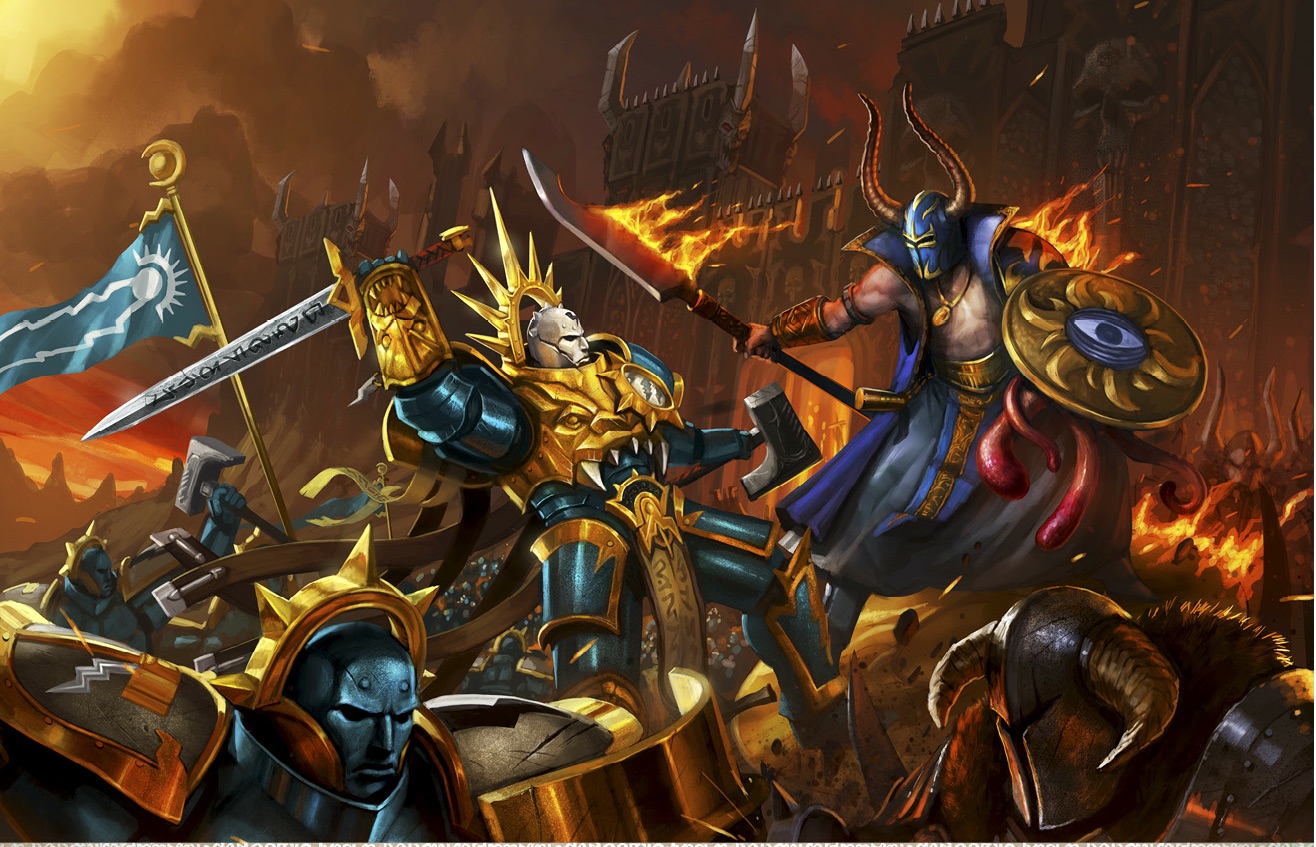 The Grand Tournament Results are in and the numbers speak for themselves!

Games Workshop has wrapped-up the Age of Sigmar Grand Tournament 2017 and they have released a ton of info on the breakdown of the tournament. How the event worked was pretty neat – they hosted 3 heats of up to 90 players. From those players, the top of the crop were invite to play in the Grand Tournament. For the final series, those 90 players represented the top Age of Sigmar Players from the previous 3 events and consisted of an interesting mix of armies. Folks have been curious to see a break down and Games Workshop is here to show off just that! 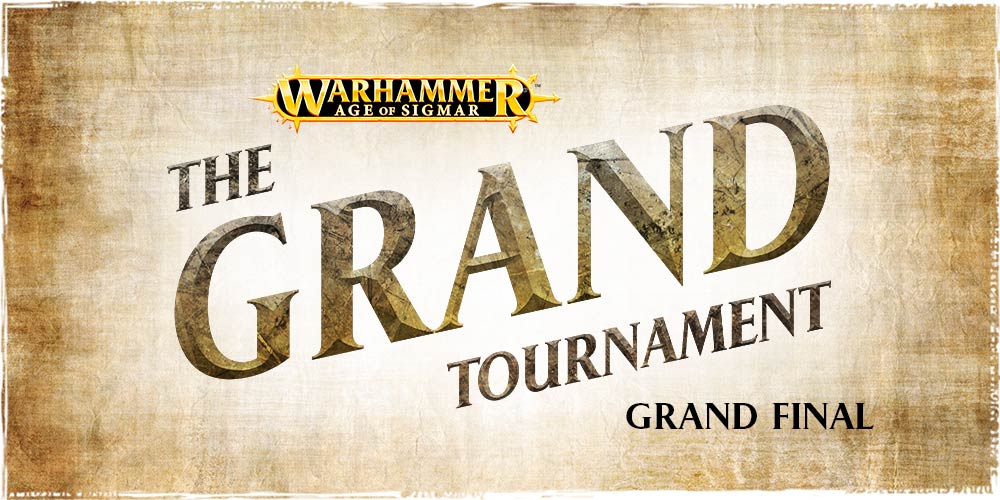 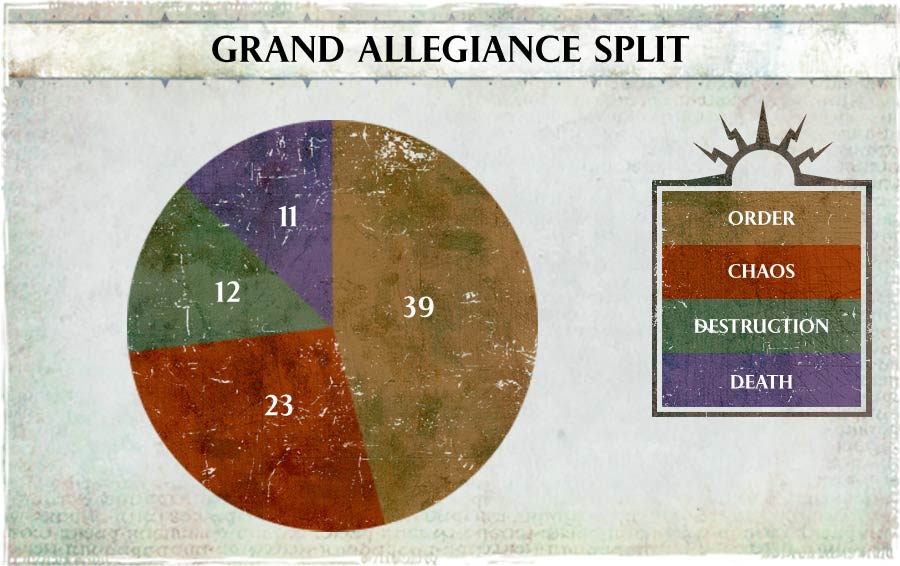 Of the 90 combatants that entered the Grand Tournament, we see the over-all breakdown by Allegiance. As you can see Order is clearly dominating the proceedings with 39 players. Chaos is in a solid second with 23. Destruction and Death are brining up the rear with 12 and 11 players, respectively. Keep in mind that Order and Chaos also have the benefit of having the most units, warscrolls, and armies to choose from as well which could be impacting those results. 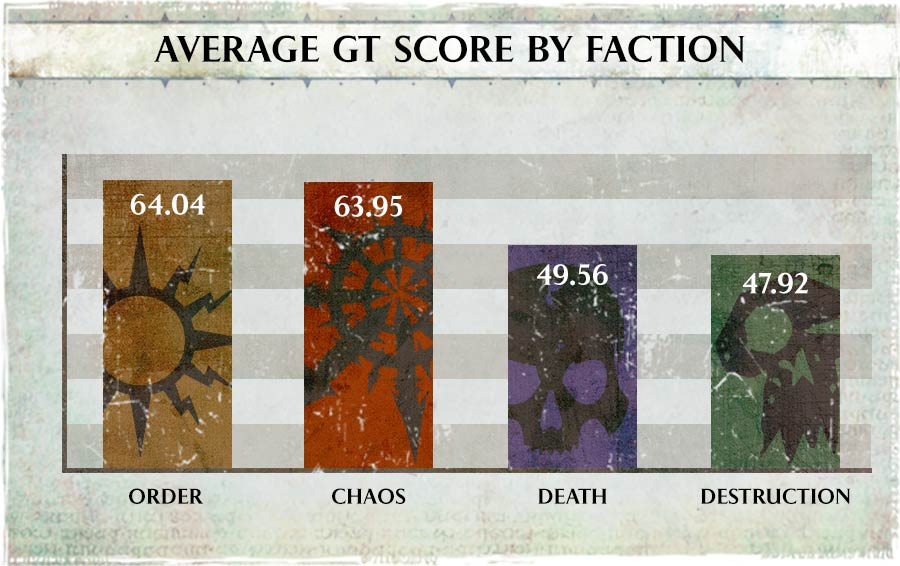 This breakdown is really interesting. The Order players came out in force and an Order player won the GT – however, Chaos was SUPER close to actually beating. On a per-player basis, this says that Chaos Players finished higher over-all on average. With next years AoS theme rumored to be around “Chaos Rising” the 2018 results could be very different… 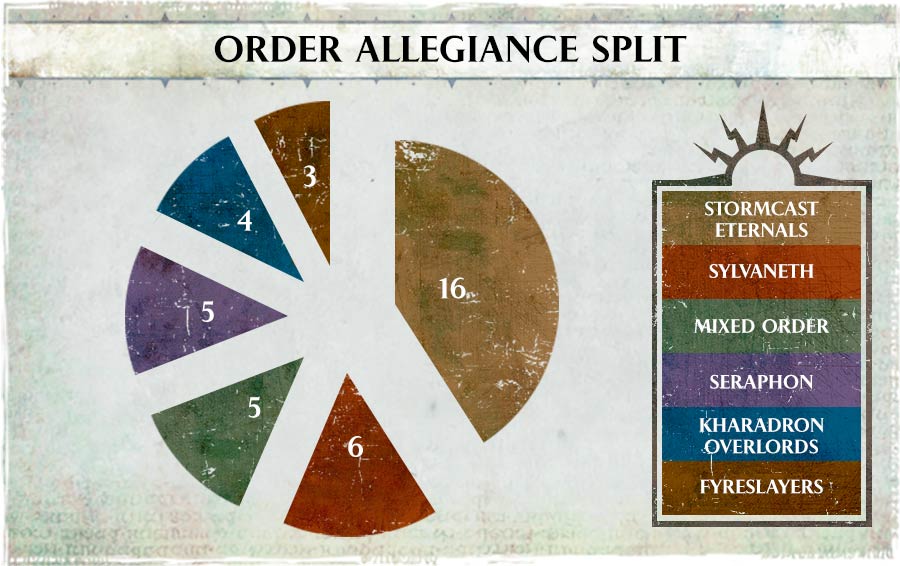 Now we start to get into faction breakdowns. These are also really interesting to take a look at. Stormcasts made the vast majority of the Order Allegiance with 16 players. All the other armies hovered around the 3-6 player mark.  Sylvaneth represented the second highest with 6 players and Fyreslayers brought up the rear with only 3 players. It’s worth noting the GT winner was playing a Mixed Order Army. 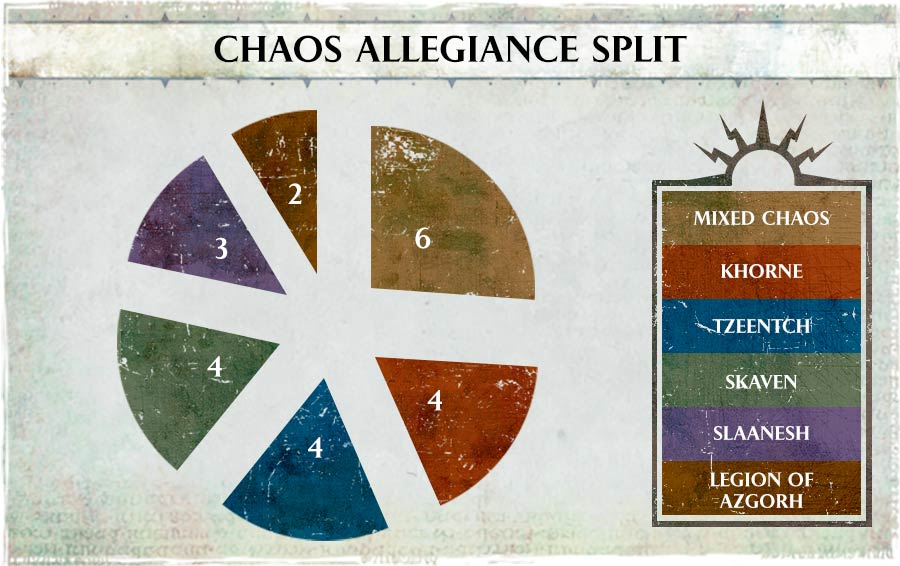 Chaos as a faction was a much closer field. Mixed Chaos actually had the largest representation with 6 players while the Legion of Azgorh was there with 2 players. Honestly, I’m actually a little surprised there were even Legion of Azgorh players there – so way to represent! 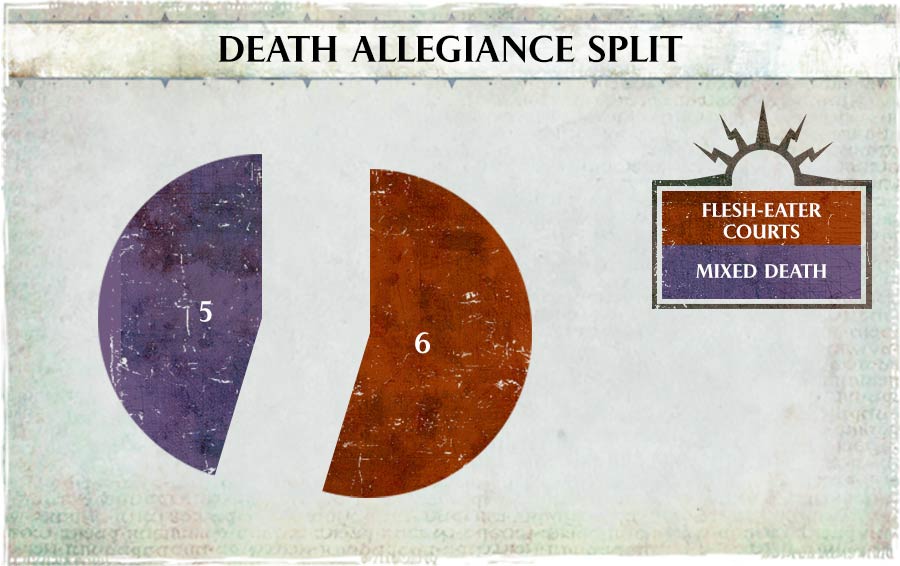 Death was pretty evenly split between the Flesh-Eater Courts and Mixed Death. The Warhammer Community team did have a good point about the reason for the split:

“It’s worth noting that whilst no players used the new Death allegiances of Soulblight and Nighthaunt, many discussions were taking place about their viability in the future! With the Handbook being released relatively close to the GT final, it’s hard to paint up an entirely new army in time and get practice games in, so many players were talking of the next GT season as an opportunity to bring Nagash’s minions back for some revenge!”

It’s reasonable to infer from the data that players would have gone with the more familiar army – especially when you’re playing at such a high level. Most folks would rather take their go-to army than an untested and unplayed wild card. 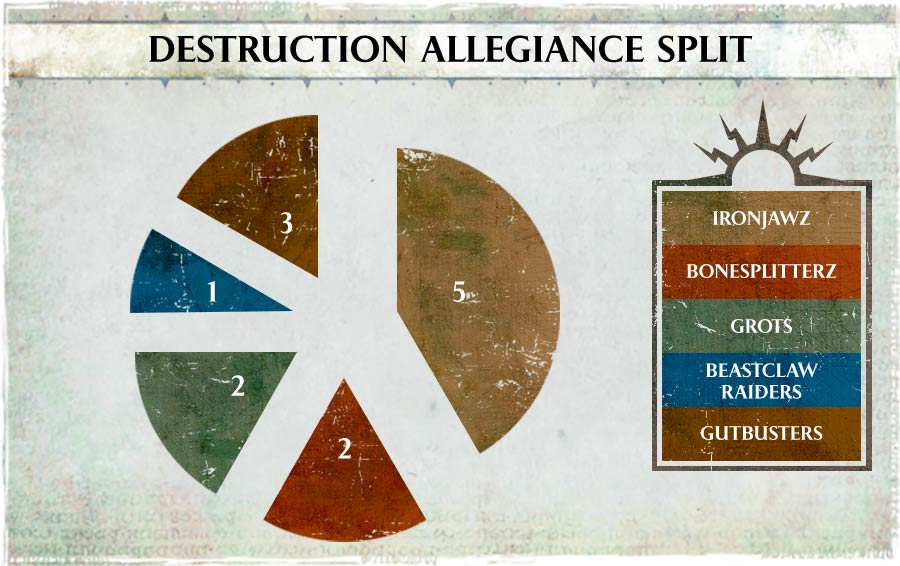 Ironjawz were the most popular Destruction army at the GT with 5 players. Beastclaw Raiders only had a lone player represent their faction at the GT. Now, there is a pretty big caveat to this list – according to the Warhammer Community Team:

The other allegiances broadly fell under Mixed Destruction, however, we’ve grouped them by theme to give you an understanding of what was being used. It’s also worth noting that whilst Beastclaw only crops up once, other allegiances still used them in some capacity such as Grots with some Beastclaw buddies!

I had a feeling that might be the case. The Beastclaw units can pack a punch and are great to fill different roles in Destruction armies. With the Stonehorn being one of the toughest units in the game – I wouldn’t be shocked if the other Destructions armies each brought one just to plug some holes. 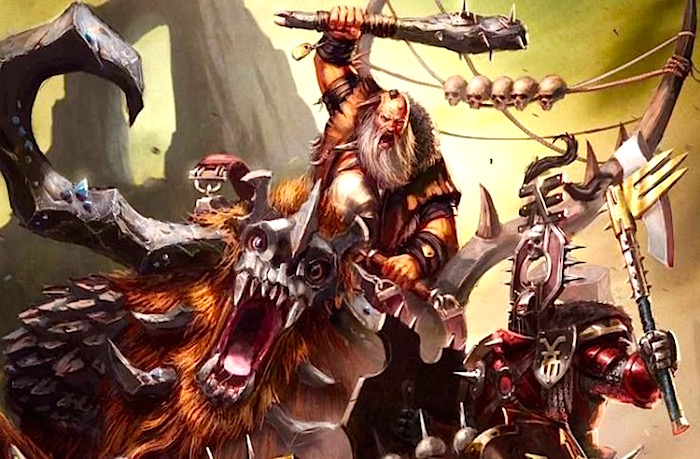 One final note direct from GW:

Whilst this only consists of the top 90 players who attended the Grand Tournament, it still represents an interesting cross-section of Age of Sigmar gaming. With this in mind, it’s important not to draw too many conclusions from the data herein. In reality, there’s nothing quite like knowing the game really well and fully understanding your army. The fact that the event was won by a unique Mixed Order army is a great example of this – nothing beats a good, knowledgeable general with a sound plan and a bit of luck!

Truer words, folks. It’s fun to take a look at the numbers and theorize, but this is based on the players who were lucky enough to attend as well. Those tickets sold out pretty quick and who knows how many players had to opt out just due to travel plans as well. Still it’s data that was collected and collated which is SOMETHING to poke at. And keep in mind there were 3 heats of 90 players that were condensed down to 90 players for the final…If we had the data on those first 3 heats then we could really dig in!

What do you think of the results? Any theories you have based on the numbers shown?

Author: Adam Harrison
Writer, Editor, Texas Native, and Austinite for 15+ years, Adam covers all things Tabletop Gaming. Which includes Warhammer 40,000, Age of Sigmar, D&D, Board Games and everything else that involves dice, boards, cards and a table. A hobbyist, player, and collector of miniatures and games, Adam's current obsession are his Death Armies for Age of Sigmar, his Blood Angels and Tyranids for 40k, and his ever growing Arkham Horror: The Card Game Collection.
Advertisement
Age of Sigmar Games Workshop Tabletop News Tournaments
Advertisement

Stay Tied To Your Hecking Couch With "The Thing" Board Game 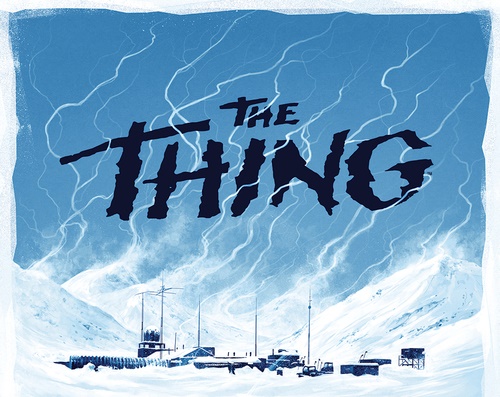