D&D: Extra Life Starts Tonight – Here’s How To Get Involved

Extra Life kicks off tonight, gearing up for a full day of D&D. Find out where you can watch and how you can make a difference!

Extra Life is a great representation of what it means to be a part of a community. It’s a day of gaming, set aside for people to come together and celebrate the games we all love, while also trying to get some good work done. Gamers give back, as they say, and this is a fantastic way to get involved. Never been a part of something like this before? It’s a great time, to start. Even if you can’t donate money to the Extra Life charity, it’s a great time to sit back, see how people in the community play D&D, and who knows, maybe make some new friends and even learn a thing or two.

Extra Life benefits Children’s Miracle Network hospitals, which helps save and improve the lives of as many children as possible. Your donations help sick kids get treatment, help fund research, or raise awareness of children’s health issues–all in all pretty good stuff. And on top of all that, you can earn some pretty sweet rewards for your donation, including a custom subclass, or a monster from the days of yore, updated to 5e rules.

We play a lot of Dungeons & Dragons here, both in front of the camera on twitch.tv/dnd and behind the scenes. But there’s nothing more satisfying than playing D&D to raise money for kids. 2017 is going to be our fourth year bringing the D&D community together to benefit Children’s Miracle Network Hospitals. With the help of our amazing community of DMs, players, donors, and viewers, we raised over $74,000 last year. And since 2013 we’ve raised an astounding $290,000 for Children’s Miracle Network Hospitals!

This year, we’re doubling down by streaming not only from the d20 Studio at the Wizards of the Coast offices, but also pulling together many of our livestream gamers to broadcast D&D sessions from multiple locations across the globe—including game sessions taking place at GameHole Con.

We’re starting with a game on the evening of November 3rd featuring the D&D team along with Satine Phoenix and Ruty Rutenberg from Maze Arcana while they’re in Madison, WI for GameHole Con. Then on November 4th, you’ll be able to watch 12 hours of D&D live play during the official Extra Life event day.

There’s a ton of cool games that you can catch this coming Friday and Saturday where you can see folks from the D&D community coming together to play the game we all love, and helping raise money to benefit the Children’s Miracle Network. There’s all kinds of cool rewards you can earn with your donations, so, check out these events, get some sweet loots, and come away feeling like a hero.

The Machineries of Death

Hidden deep within the jungles of Chult is a forgotten temple of Bhaal. The place is warded with dozens of fiendish traps and terrible monsters as befits the Lord of Murder. With the adventure of the Death Curse, it might offer hope to those who have lost everything. The temple was rumored to be the hiding place of the Voice of Ilmater. If the heroes can liberate this powerful artifact, perhaps they can turn the tide of death that threatens to overwhelm the world.

Run by co-creator and creative lead for 5th Edition, Mike Mearls, the Machineries of Death pits heroes against some devious traps and deadly monsters. But you can help or hinder them–see some legendary NPCs, items, or monsters make an appearance fueled by your donations. Or better yet, get an updated monster of your choice in an upcoming DMs Guild Mini Monster Manual.

After this session, everything kicks off early Saturday morning (depending) with Encounter Roleplay. 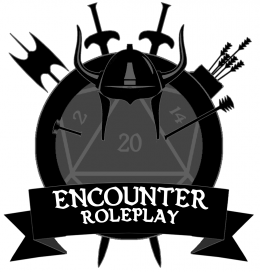 Dungeon Master extraordinaire Will Jones of Encounter Roleplay is helming this mystery session to get things started.

Lauren Urban of Drunks & Dragons and Destiny & Doom is behind the screen of this session that promises to be full of Hadrosauruses. Lots of ways to meddle with the game here, including naming one of those Hadrosaurs. Dinosaurs make any game better, and Lauren Urban is just a delight to watch when streaming, so, stop on in, get your name in the game, and see how many adventurers’ deaths you can personally be responsible for!

*Remember that any names, messages, or other rewards must fall in the Code of Conduct policies!

Run by Shawn Wood, aka Studiowander, who is responsible for the look and feel of many of your favorite monsters, minions, and mlocations–he’s the in-house concept artist for D&D. Tune in to this event to snag a sketch from the man himself. This should be a pretty cool stream to check out, and afterwards it’s over to Madison Wisconsin (digitally, not actually, you don’t even have to put pants on, you can just order another pizza and stay comfy in your own home) for the finale. 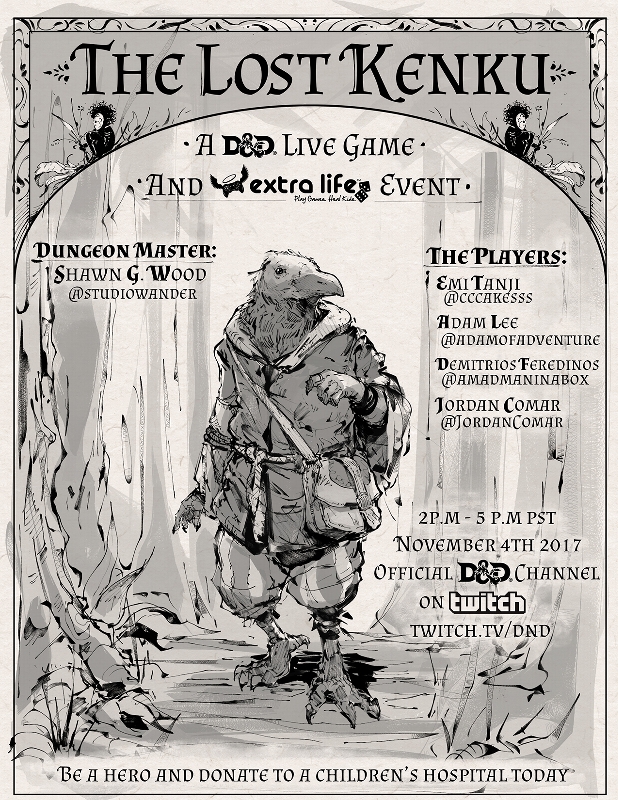 Finding a lost companion is difficult at the best of times. Finding a kenku thief lost in the jungles of Chult—let us just say that is not a task for the inexperienced. A strange eccentric, a strange town, and a dangerous jungle are all that stands in the way of finding your friend and solving this mystery. Possibly dinosaurs, zombies, dino-zombies, man-eating flora, snake people, and… anything from the monster manual really. Best just prepare for everything. Chult is dangerous.

Livestreamed from Game Hole Con in Madison, Wisconsin, Chris Perkins, dungeon master to the Stars, will be bringing you a game that includes a star-studded cast including Erin Evans, Ed Greenwood, and Pat Rothfuss, who will presumably be repping what he’s learned from his perma-stint as an intern for Acquisitions Incorporated. No donation drive rewards have been announced yet, but given that this is the showstopping final event, I wouldn’t be surprised if you saw something special in the stream. Either way, you won’t want to miss the thrilling conclusion to WOTC’s Day of D&D.

Make your own fun, donate for two NPCs who just hate each other to show up at the same time.