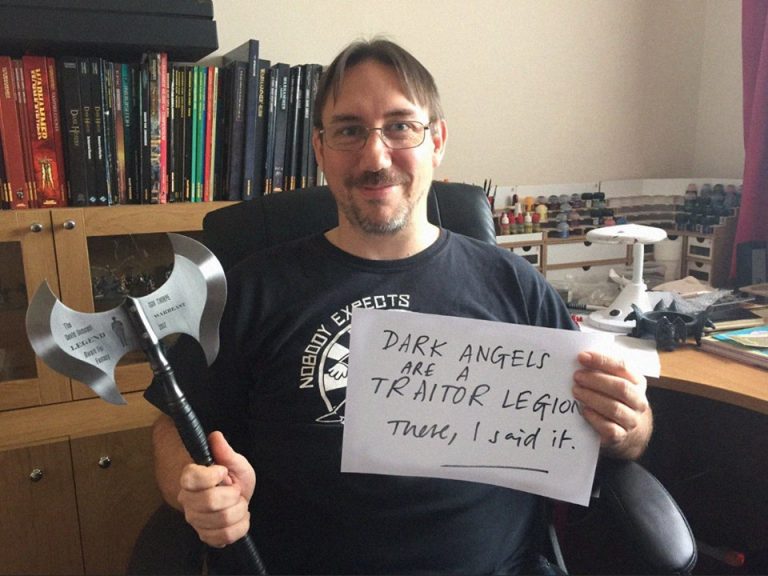 Gave Thorpe of Black Library and GW Design Studio fame recently did an AMA on reddit and answered a lot of interesting questions.

First off, that top image is a fantastic piece of photoshop by Joe McLaren that Gav highlighted.  The original promotional image for the AMA is below: 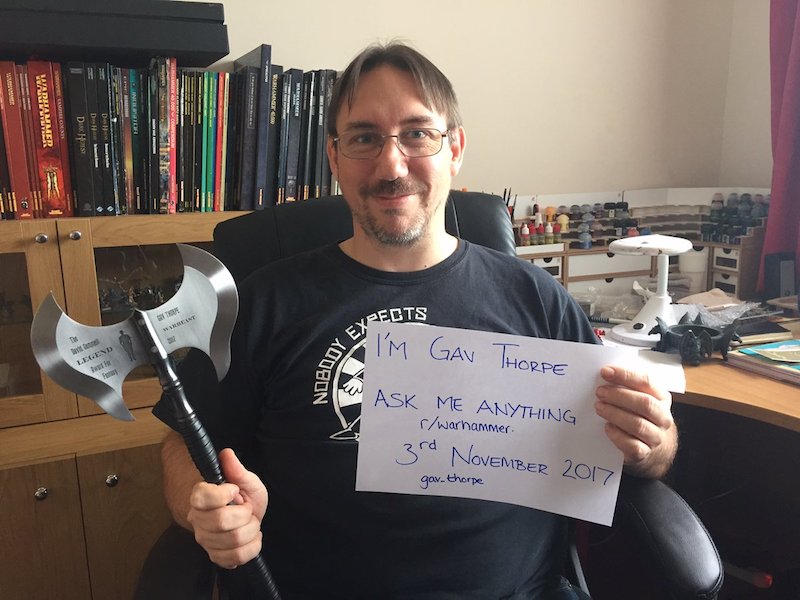 Here’s some standouts from the AMA:

TheOnlyDerec: What is your favourite Space Marine chapter and why is it the Minotaurs?

I’ve always had a softish spot for the Blood Angels. Poor, damned, flawed heroes that they are. Plus we all know that red is the best colour. However, being a creative type, I think my favourite will hopefully be the Primaris founding chapter I’m currently inventing to paint up my Dark Imperium models… Details to come.

Khaos_Zand3r: Thoughts on the Age of Sigmar lore as it currently stands?

Liking it enough that I’ll be starting a new trilogy for BL next year. I think the last twelve months in particular have shown it really starting to find its way, both from the Studio and authors. And players are really seeing the possibilities now too.

It’s still tricky for me as a writer to get my head around the tone occasionally, but that’s simply unfamiliarity.

bjornbjornsen: I’d be interested to know what your reaction was to the small but loyal Squat fanbase that still exists out there? Converting AoS models to use in 40k, keeping the old lead model circulating on the second hand market, etc.

I think it’s very Squattish. Resilient, you might say. I notice this with other fandoms – Sisters players are very devout in their attention to their army, Dark Angels players love arguing amongst themselves about the Fallen, and orks players… Well, they’re just here for the dakka.

Aslum: Hi Gav, I’m sure I’m not the only one who wants to know, when is Slaanesh/Emperor’s Children going to get some love (40k or AoS)? Khorne and Nurgle are constantly getting new units and fluff, and recently Tzeentch got a bunch of new releases (partially spurred by Silver Tower). Meanwhile Slaanesh has been practically fridged in Age of Sigmar and has a big target on her head from the Ynnari in 40k.

Sorry. I don’t have any scoop for you on that front. The order you have described is the same as the sales popularity of the gods (or was when I worked in the Studio) so Khorne and Nurgle have usually been top of the heap in terms of favour (ha!). I don’t know what’s happening with the Prince of Pleasure in AoS but I’m hoping the darling goddess will return with a bang!

With other power-specific codexes and armies being released, I figure Slaanesh will be along at some point, but don’t know when.

One carnifex-sized grot, on the basis that even though it’s big, it’s still really cowardly…

MagicJuggler: From an “executive meddling” perspective, how much overarching freedom was afforded for working on the rules? Was the team fairly egalitarian in nature, or did one or two people in the team “call the shots” for most intents and purposes? How did the team try to balance the “beer and pretzels” aspect, versus the “unambiguous rules” aspect?

In terms of the rules detail, there wasn’t much direct influence – unless you consider one of the ‘executives’ was Rick Priestley who had a thing or two to say about games design in general, and the development of Warhammer in particular!

I think that the current approach is ideal, with clear acknowledgement of narrative play, match play and so on. Rather than a one size fits all approach that we had to balance, some output can be geared towards one set of players or another.

The great thing about the Games Dev team was the spread of attitudes and abilities between number-crunching tournament players like Alessio Cavatore, and a more story approach from myself, and everything in between via the other members. Work to your strengths and cover each other’s weaknesses.

~What did you discover?

Author: Larry Vela
Dad, Gamer, Publisher, Pilot, Texan. All games all the time since junior-high. I started BoLS Interactive in 2006. I’m a lifelong tabletop & RPG gaming enthusiast, and internet publisher working to entertain and inform my readers every day. I've been playing RPGs and Tabletop Games since the 1970s. I'm been playing and covering Warhammer and Warhammer 40K for over 35 years.
Advertisement
Age of Sigmar Interview Tabletop News Warhammer 40k
Advertisement