To keep up with the rapidly expanding Star Wars Destiny, Fantasy Flight Games is changing Organized Play’s structure up.

Fantasy Flight Games has had some growing pains to keep up with the demand for Star Wars Destiny as it’s been a rapidly expanding game. The new Two-Player Starter for the next Cycle is out and folks are eagerly awaiting the next starter sets and expansion packs for the Legacies Expansion. To keep up with the ever-growing card pool Star Wars Destiny is once again taking cue from the collective competitive collectable card-game world and introducing Rotations for their products. 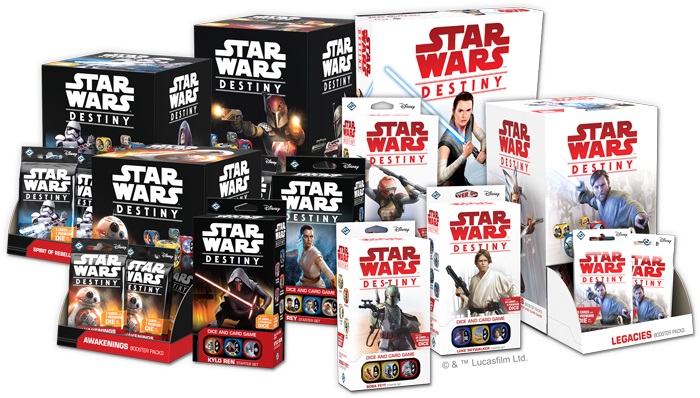 Accordingly, to make sure that the game’s growth is matched by a rewarding Organized Play environment, Fantasy Flight Games is establishing three distinct formats for Star Wars: Destiny Organized Play—Standard, Trilogy, and Infinite.

Each of these formats is defined by a different pool of cards and offers a different play experience. Each format will also be accompanied by a format-specific Holocron document, which—in combination with the game’s core rules—will provide all the information you need to construct format-legal decks. These freely downloadable documents will be published shortly and updated at regular intervals. 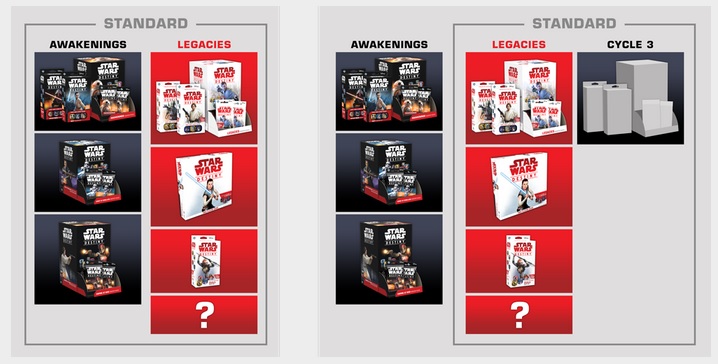 If you’re familiar at all with how other CCGs manage their ever increasing card pools, then hopefully this isn’t a shock to you. This is a pretty common practice for CCGs because it helps them manage a few things.

1 – It helps to limit the card pool for competitive play. As more and more cards and dice come out, the game becomes exponentially more difficult to test and balance. At some point, it’s just too unwieldy and you cannot take into account for all the strategies that are available.

2 – It creates an entry point for new players. The Trilogy format is great to jump into if you have never played in a previous cycle. You don’t have to worry about dealing with older cards that you might not of seen before and it’s less to digest when you’re new.

3 – It still allows people with vast collections to play in an open and unrestricted type of format. Infinite is where things can get weird and some players really enjoy that type of game play that will be limited in Standard and Trilogy.

For now, all three of these formats share a lot of overlap. But as time goes on and as more and more sets come out, you’ll start to see those formats shift away from each other. I think that’s a healthy part of the game. New expansions will introduce new mechanics and themes. The designers can focus on those and not worry about the interactions between those new cards and something from 3 cycles ago disrupting the current competitive meta for Standard and Trilogy play. And the players who DO enjoy playing with ALL the options will have Infinite to play with. Everyone from all skill levels and play styles will have a place to dive in.

How do you feel about the introduction of Rotations for Star Wars Destiny? Let us know in the comments below!