There are two new FAQs available, Tyranids and Grey Knights. Get your rules clarifications while they’re hot.

That’s right it’s FAQ time one and all. This time there are some updates to the Grey Knights Codex and the Tyranids Codex, giving both of these Factions some clarifications and answering some of the rules questions that have cropped up in the wake of the Tyranid Codex having had a chance to be out in the wild where it can live and breathe and get read by players who will inventively interpret (and use) these rules in ways that no reasonable person would ever have thought.

The Grey Knights new FAQ is real simple. The Psychic Channeling Stratagem is clarified to read that it lets you roll one extra d6 on a psychic test and discard the lowest result.

The Tyranids FAQ section though–this one has some broader impact than just for the Tyranids. There are some important changes to the rules that affect the rest of the game: 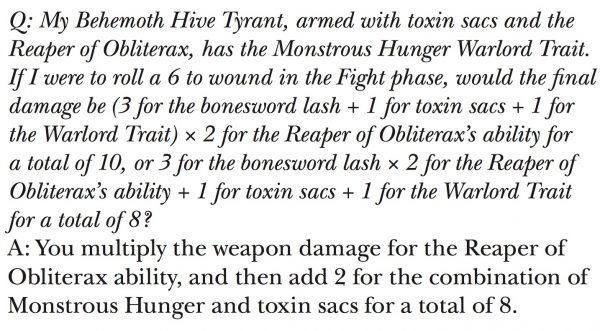 This one simply goes over the correct order of operations for similar effects. Multiply then Add.

This FAQ ruling reinforces how the multiple sets of weapons work. This change was first addressed in the Index FAQ but it’s be confirmed again with the FAQ for the Codex.

The Tyranid FAQ did have this ruling that probably should be included in the main rules! No units can ever Advance twice in a single phase. Now, for most armies, this shouldn’t be that big of a deal. However, Tyranids might not be the only army that can get two moves in one phase for long…

For Tyranid players this has implications regarding a couple of stratagems. But that’s not all: 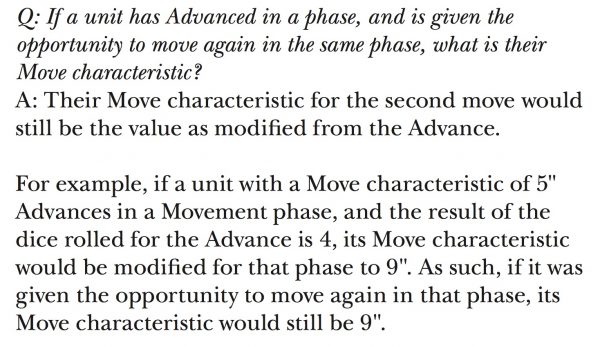 Advancing apparently also changes your Move characteristic for the entire phase. That ruling is strange enough. But that means you can’t Move + Advance, and then in the same phase Move + Advance. Instead your second move is just a copy of your previous distance. It’s actually a slight change but you never move less than your previous speed. But you can’t move faster either…

This clarification is a needed one as it clears up the conflict between the Stratagem and the Psychic Power. In this case, the Stratagem’s “Cannot Charge” overrules the Psychic power’s “may charge if the unit advanced.”

There are lots more changes for the Tyranids – and two more for the Grey Knights. Go check out their FAQs below:

What big changes did you spot in the FAQs?