D&D: Sage Advice about Xanathar’s Guide to Everything

Xanathar’s Guide to Everything introduces a wealth of new options, spells, rules, and arguments about what a rule means. Sage Advice has your back.

It is a truth universally acknowledged, that a single man in possession of a large fortune, must be in want of a wife. Equally universally acknowledged, but only slightly less well known is: never get involved in a land war in Asia, followed closely by never bet against a Sicilian when death is on the line. If we keep making our way through these universally acknowledged truths, somewhere in the top 25, just after ‘saying ‘what could possibly go wrong’ ironically still counts as saying it’ and coming in ahead of ‘if a video link ends in XcQ you’re about to get Rickrolled’ you’ll find the core of today’s article:

It is a truth universally acknowledged that, when new rules are introduced to a roleplaying game, players will argue over what they mean.

See also every new Codex released for Warhammer 40K, every new edition of a board game, every expansion set–if you build it, they will find innovative new ways of getting it utterly wrong. Fortunately, Barthes was wrong, and the Author is in fact still very much alive. With a team of people ready to tackle your questions no less. 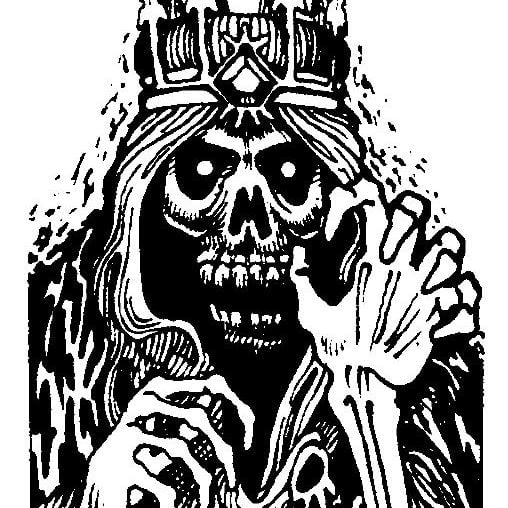 Possibly the Author is Undead

And today’s Sage Advice compendium tackles more than a hundred questions, comments, and concerns. So let’s dig in and get some of these rules sorted out.

So as you might expect, the questions run the gamut from weird corner-case scenarios that might not come up often–I like to call these, “well technically you could, but why”–to confusion about interactions of general rules, “spell slots do what again?” to things that it’s just nice to have an official ruling on in general, aka common sense says it works like this, and it’s nice to know the developers have employed it judiciously in designing the rules.

Let’s take a look at a few of them. You can of course, find the whole laundry list of Xanathar’s Guide questions and answers right here, but as previously mentioned there are more than a hundred, so be ready to settle in for the long haul if you try to marathon it.

Let’s kick the celebrations off with everyone’s favorite non-human PC race: Elves. The long and short of this question and answer is that, despite being worded differently from class features that let you learn a spell and cast it without using a spell slot, these feats give you access to the spells they mention once per long rest, while the cantrips follow all the normal rules for cantrips.

For those of you playing along at home, Beacon of Hope maximizes all healing rolls. Life Transference, though, lets you damage yourself to heal another creature–the upshot here is: pay attention to whether you’re rolling damage or healing. It seems to imply that if an effect tells you to roll xdx damage, it’s telling you to deal damage, even if that damage heals you or another character as opposed to regaining a number of hit points equal to xdx.

A little gritty in terms of the crunch of the rules, but this is an important distinction with broader applications. Speaking of spells though:

As you might expect, Shadow Blade costs a bonus action to cast, but that’s it. If you fight with a light weapon, you can indeed make an off-hand attack with it. So you can dual wield a (light) pact weapon and a shadow blade. But Shadow Blade seems to be a spell that has captured the imagination of a lot of players. You can find questions like, “do I still get my ability modifier if I attack with it?” (you do) or a bevvy of people wanting to give it to classes that don’t have access to it immediately.

I think I have my next character concept. A kensei who wields a blade of darkness pulled forth from who knows where. It is not the most practical of builds by any stretch of the imagination–you get a melee and ranged weapon to start with, and don’t get to make another choice until 6th level. You would however be doing a ase 2d8 with every attack you make–again, there are plenty of better ways to do this–but I love the idea of a character who, during the climactic showdowns of their career, draws forth a blade of darkness and is able to wield their full power through it.

Everyone seems to agree that Shadow Blade, while not the most practical spell, is really cool. You do run the risk of it evaporating if you’re disarmed, or it could be dispelled, or even counterspelled–which segues nicely into the next chunk of questions, which also illustrate why, if you’re not reading Sage Advice regularly, you should.

So, for clarification: in Xanathar’s Guide they introduce an (optional) rule for identifying a spell–a guideline for GMs who want some hard and fast rules about players knowing what kind of spells your NPC mages are casting. Basically you take a reaction and make a DC 15 + spell level Arcana Check. On a success you can identify it–as long as it has some component to identify, so things like Subtle Spell or innate spellcasting traits skip that step–but this led to many people realizing that you can’t identify a spell and counter it. People thought this must be an error.

It wasn’t. People pointed out that it made it harder to know if you should waste a Counterspell on something like the Mage casting a Magic Missile as opposed to an Abi-Dalzim’s Horrid Wilting.

This led many people to wonder what the point was to even have the spell in the first place–and one of my all-time favorite replies:

I love Jeremy Crawford. You should too. 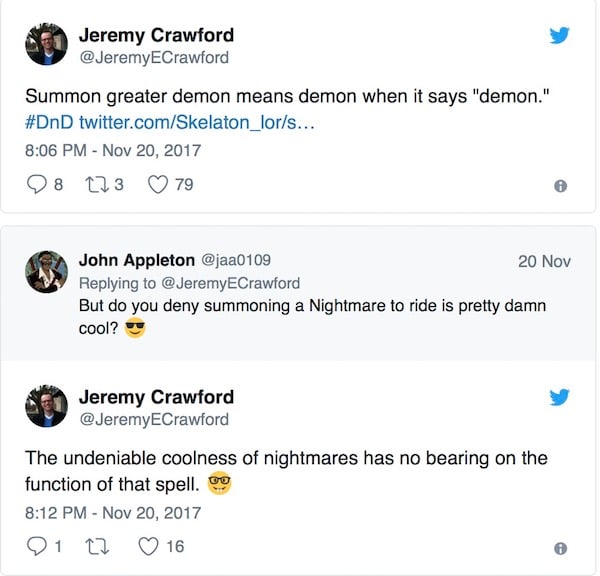 Two last little nuggets for your consideration. While we’re on spells in general, here’s one about Healing Spirit, which is causing a bit of a stir online (and possibly around the table, though it has yet to impact gameplay around my table, I can see it being a balance issue, potentially and this solution seems tailor-made):

And finally one last, but important, ruling that you should remember the next time your turn comes up and you’ve got multiple, simultaneous effects:

There are plenty more questions/clarifications to be found. The link we’ve shared is a great way to round up all the FAQs for Xanathar’s Guide, so check it out. And enjoy!