Tell WoTC what you *really* think about all those Elves through their latest survey.

Elves are coming out of the woodwork these days, which, I guess is appropriate, given the Elven propensity for living in forested areas. Although there are a lot of different Elves. You’ve got Feywild Elves. Flying Elves. Wild Elves. Sea Elves. And now Shadow Elves. And that’s aside from the traditional Wood, High, Dark, and like Moon Elves. A veritable Sentai/Magical Girl team, basically. 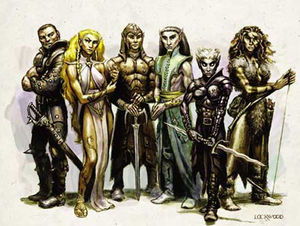 Whatever flavor of Elf you prefer, Wizards of the Coast would like to hear from you. Admittedly right now they’re only interested in your opinions on the four most recent of the subraces.

We’ve talked about these Elves before, and these new elves do get some pretty cool abilities. There’s the Avariel, whose special power is that they have a fly speed of 30 feet, which is perhaps the greatest of powers you can get. Admittedly you give up an extra stat boost–but, you’re flying and that’s one of the best buffs in the game, so. Then there’s the Grugach who get to pick up an extra Druid cantrip and some Strength. Or the Sea Elves who are sad that they don’t have a cool name, but that’s okay because they can breathe underwater and have a swim speed, and the Shadar-Kai who probably have the coolest ‘power’ of the group because once per rest they can teleport 15 feet and gain resistance to all damage as a bonus action.

Last time, Unearthed Arcana presented four more elf subraces: avariel (winged elves), grugach (the wild elves of Greyhawk), sea elves, and shadar-kai (deathly servants of the Raven Queen). Now that you’ve had a chance to read and ponder these options from last time, we’re ready for you to give us your feedback about them in the following survey. This survey will remain open for about three weeks.

This Is Playtest Material
The material in Unearthed Arcana is presented for playtesting and to spark your imagination. These game mechanics are in draft form, usable in your campaign but not refined by final game development and editing. They are not officially part of the game. For these reasons, material in this column is not legal in D&D Adventurers League events.

Now if only we could see some Dragonborn variants. Or maybe some Goliaths?