The Blood Angel’s Codex is out an in stores – bring on the Sons of Sanguinius!

Our friends at Dragon’s Lair Comics & Fantasy brought over the Codex: Blood Angels! The Death Company is back in full force and ready to rock and roll:

The Codex follows the exact same format as previous codexes. It’s a 144 Page Hardback and it’s got all the bells and whistles you’d expect. 6 Tactical Objectives, 6 Warlord Traits, 6 Psychic Powers, 6 Relics, and 25 Stratagems for the Blood Angels. Also, you’ll get all your Datasheets, rules, special rules, etc. we were all hoping for in the book as well. There is a new unit in the form of a new Sanguinary Novitiate – which is kind of like an Apothecary. In terms of new models, the Blood Angels did get a new LT: 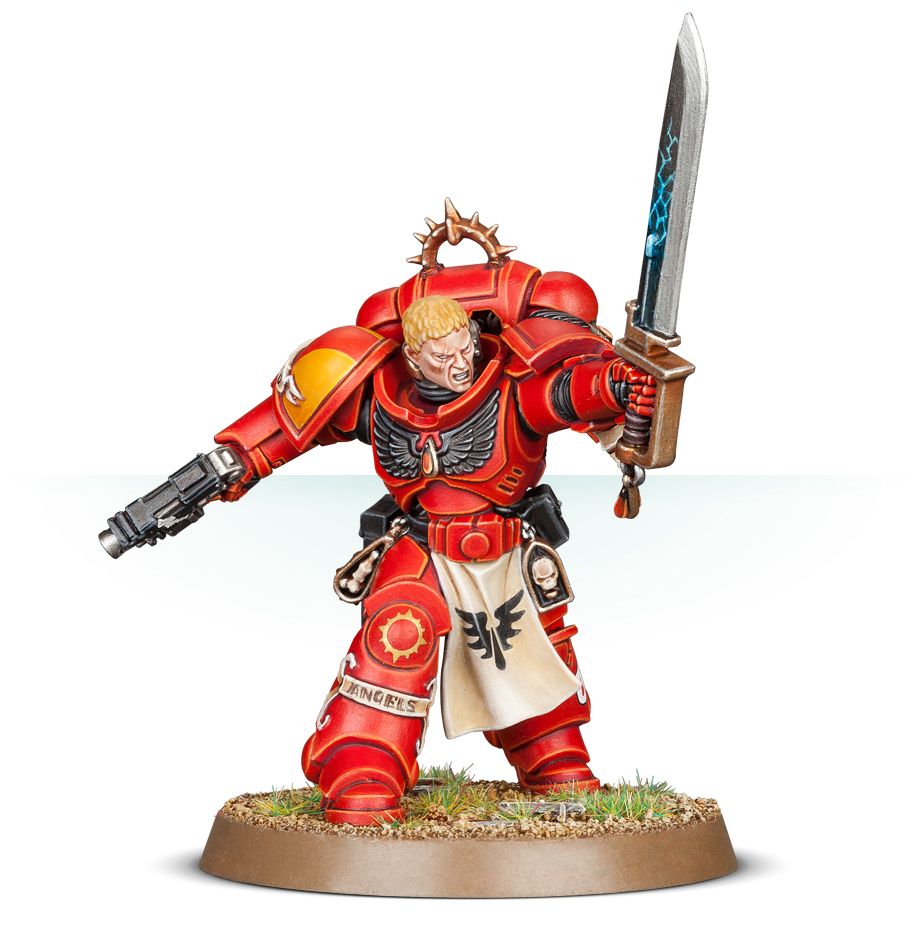 And a new upgrade kit for the Primaris Marines: 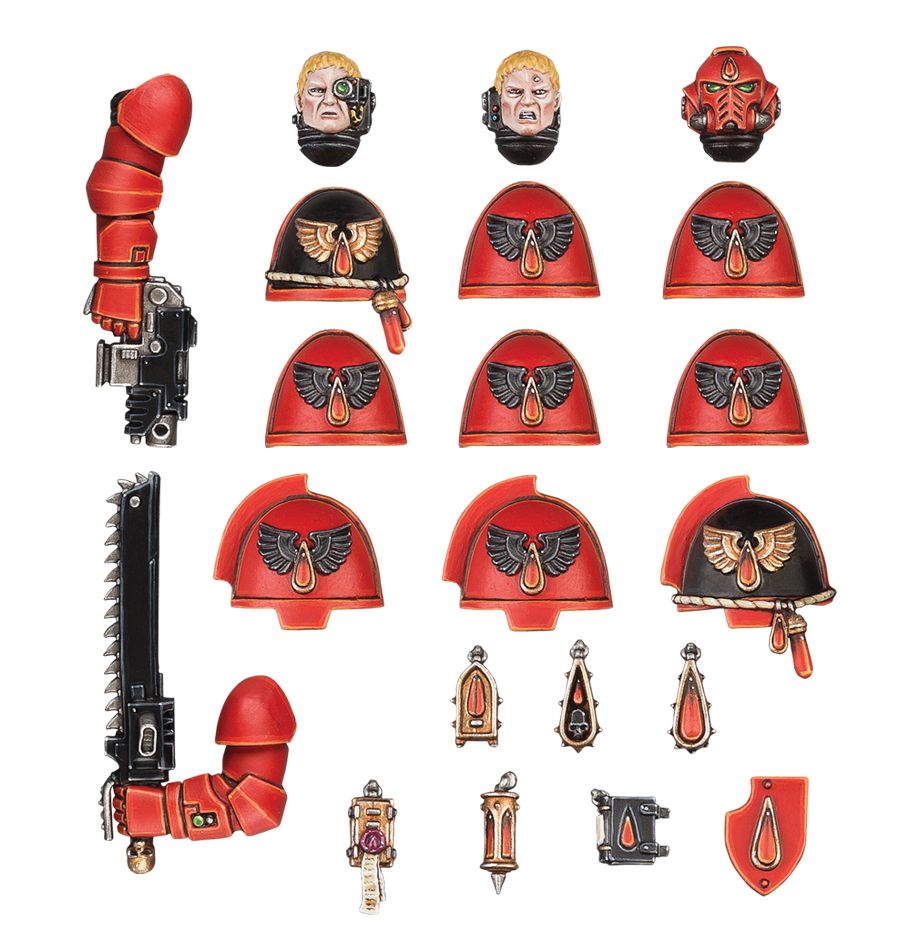 So you’l be able to Blood Angel-up your Hellblasters and Intercessors. Oh and speaking of Primaris, naturally all the new Primaris Marines are also added to the army. The Codex goes into more detail about how the Blood Angels and their successor chapters ended up with Primaris and it also skirts around how the BA are adopting these new Primaris Marines. It also hints that Guilliman already knew about their “flaw” and frankly, didn’t really care. He sees the Blood Angels as Brothers-in-arms and an asset for the Imperium…Or he’s already making plans to deal with them. This is Guilliman after all.

Personally, I’m glad to see two big things in this book. The first is an expansion on the Lore of the Blood Angels, post Gathering Storm. The second thing I’m glad to see is that Death Company aren’t just viable again, they are scary if you don’t prep for them. Overall, I think the BA Codex is a good edition to the game – it’s not going to be the next be OP thing, but it’s by no means the weakest book out there! Codex: Blood Angels is out and in stores now! 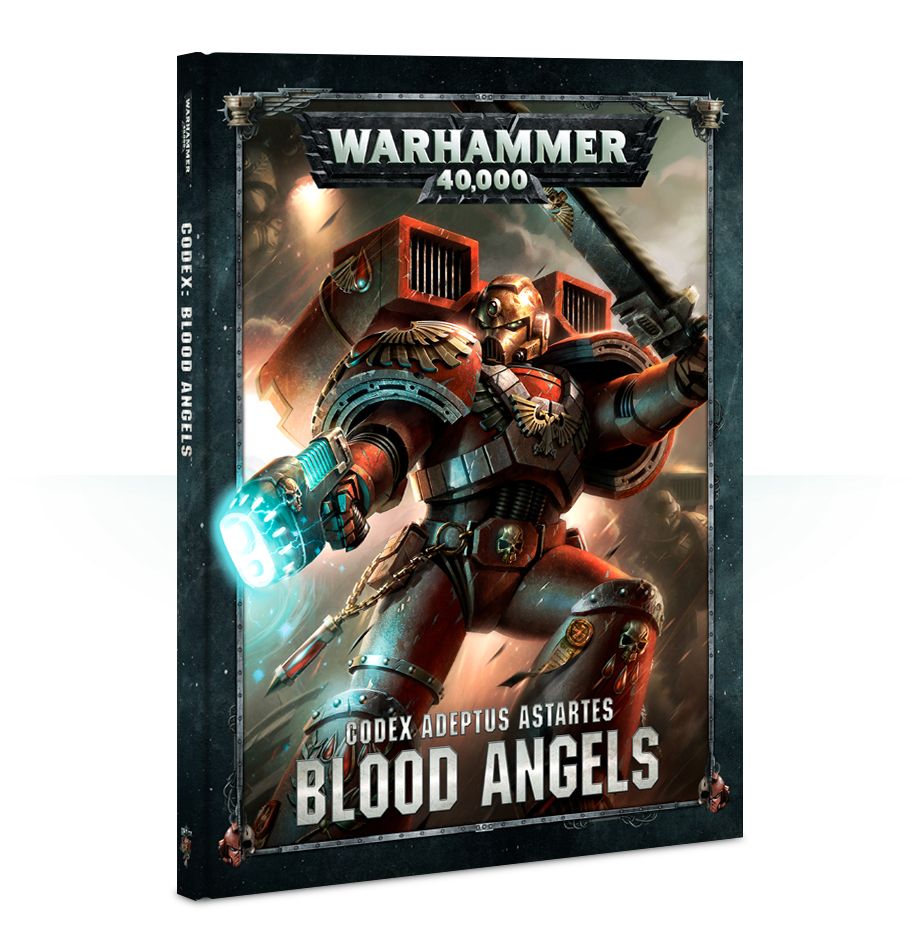 Sons of the angel-winged Primarch Sanguinius, the Blood Angels are noble and magnificent, a proud Space Marine chapter with ten millennia of history. They are warrior heroes who descend into battle on flaming wings to stand between the Emperor’s servants and the heretical hordes that seek to destroy them. Yet beneath their heroic exterior lies a dark secret known as the Flaw, a gene-curse that has bedevilled them for millennia, ravaging their souls until they fight as much for a suitably heroic end as they do for victory in the Emperor’s name.

Codex: Blood Angels contains a wealth of background and rules – the definitive book for Blood Angels collectors. Within this 144-page hardback, you’ll find:

– The Angelic Host: the origin of the Blood Angels, the story behind their homeworld of Ball, the horror of the Flaw and the introduction of Primaris Space Marines to their ranks;
– Ordering the Host: a detailed breakdown of the Blood Angels’ Chapter organisation, their heraldries and vehicle markings;
– Colour schemes and heraldries for 8 successor Chapters: Angels Encarmine, Angels Sanguine, Flesh Tearers, Carmine Blades, Angels Vermillion, Blood Drinkers, Knights of the Chalice, and Lamenters;
– A Chronicle of Heroes: a timeline of major Blood Angels engagements, from the founding to the present;
– Background and details on each character and unit available to a Blood Angels army;
– A showcase of beautifully painted Citadel miniatures, with example armies featuring everything from individual images of models to battle scenes on terrain.

Everything you need to get a Blood Angels army primed for games of Warhammer 40,000 is in here:

Author: Adam Harrison
Writer, Editor, Texas Native, and Austinite for 15+ years, Adam covers all things Tabletop Gaming. Which includes Warhammer 40,000, Age of Sigmar, D&D, Board Games and everything else that involves dice, boards, cards and a table. A hobbyist, player, and collector of miniatures and games, Adam's current obsession are his Death Armies for Age of Sigmar, his Blood Angels and Tyranids for 40k, and his ever growing Arkham Horror: The Card Game Collection.
Advertisement
Blood Angels Games Workshop Tabletop News Tabletop Spotlight Unboxing Videos Warhammer 40k
Advertisement

Goatboys 40K: Fast and Furious Angels of the Dark!