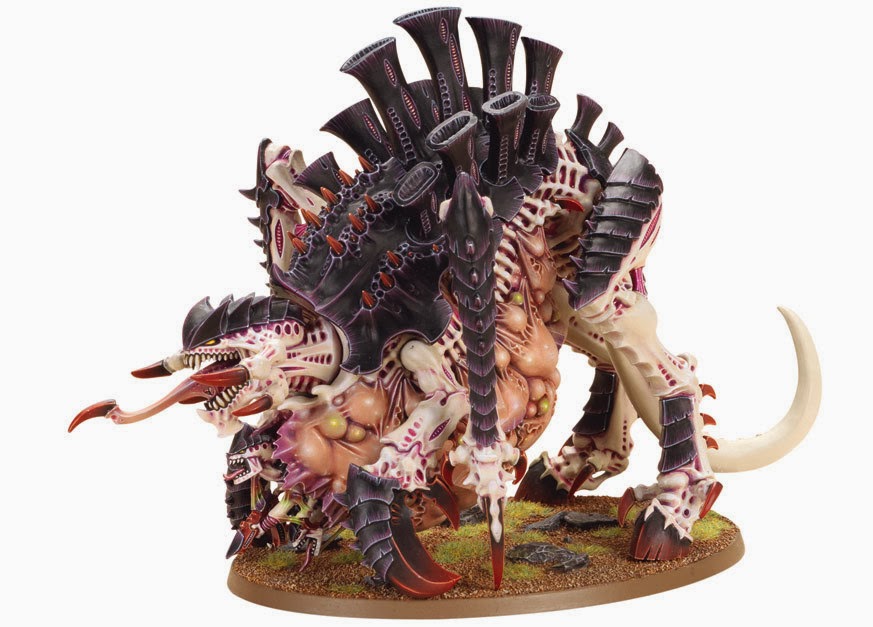 Today, we talk about the largest but maybe least in-chargest of the Tyranid HQs, the Tervigon.

Hey all, Danny here from TFG Radio, and today, we talk about the largest but maybe least in-chargest of the Tyranid HQs, the Tervigon.

The Tervigon is typically a backfield force multiplier with just a dash of surprise combat power, but with a large footprint and no protections, it is the definition of fire magnet. 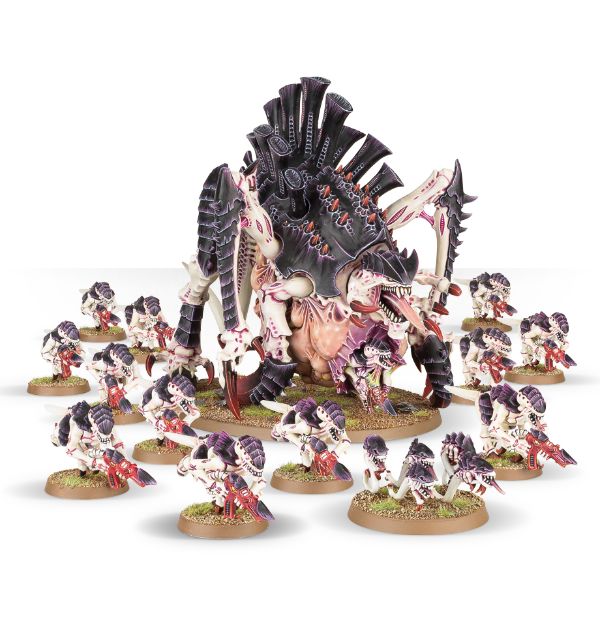 So the Tervigon is the only HQ choice with a dmg D6 weapon, but it is a bit wasted on a bug with only 3 attacks at WS 4+.  While S7 is good enough to do the job on most targets, again, with only 3 attacks that hit half of the time, this is not ideal.  The Tervigon is not really a front-line melee monster, and the penalty on crushing claws means that you are hitting just once on average dice when the beast is healthy.  That’s not so good on an already expensive model.  The talons are the best option for the slight uptick of accuracy.   Stinger-Salvo isn’t too bad as it really excels at just doing another wound to a chaff unit to hopefully push them over the edge in terms of morale. 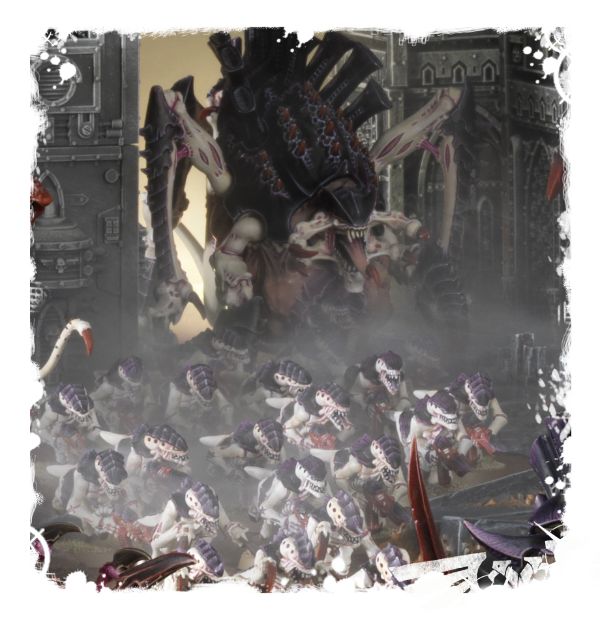 So the real money here is what the Tervigon has done since it first debuted, so long ago.  The big bug is just a giant incubator for Termagants, and so the Tervigon is designed to work with a swarm of the little ones, replacing their losses as well as providing a nice shooting buff.   You can save a bit of points and still get a lot of efficiency out of a unit of 30 Termagants with 20 Devourers and 10 Fleshborers as you save points by not taking all 30 devourers, but you have basically chaff wounds in the unit itself to absorb fire that are replaced each turn.  Of course, any dedicated fire will likely kill more than 10 Termagants, but then having layered buffs like a Venomthrope/Malanthrope and Leviathan Hive Fleet for the 6+ Feel No Pain save can make a Termagant unit far more durable than it may seem.  Of course, the big penalty is still here, namely that the Tervigon does damage to Termagants near it when it dies, and while it is now a beefy T8, W14 tank, it lacks an invulnerable save, and it is a big model, so it is easy to get shots off on it. 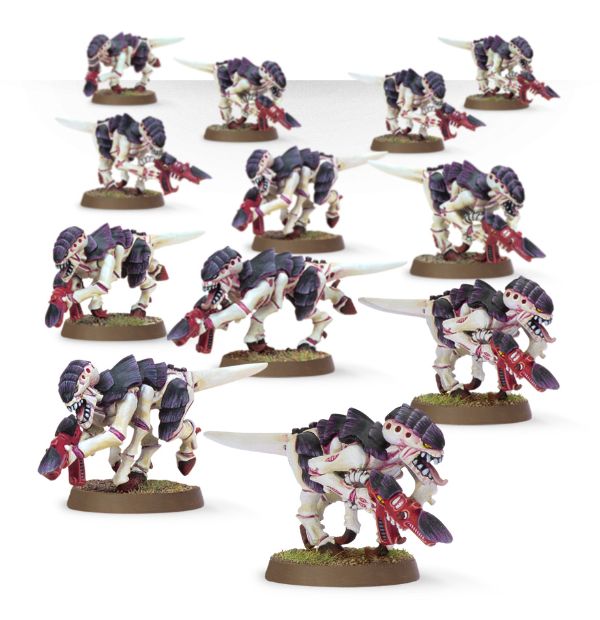 The best use of the Tervigon is as a force multiplier for one of my favorite entries in the codex, the humble Termagant.  The reroll 1s to hit aura for shooting is nice for the Termagants who specialize in high volume fire when given Devourers, so that extra 8% to hit pairs quite nicely with up to 90 shots.  Throw in that Termagants self-buff for a reroll 1s to wound, and you have a nice little firebase that is great at whittling down other chaff units.  It also lets you take a very shooty unit outside of the Kronos hive fleet, so you can rock Leviathan for an extra 6+ Feel No Pain style save on both the Gants and the Tervi, making them just a bit more annoying to shift.  You can also rock this synergy well with Jormungandr for a 2+ save Tervigon, which is a 5+ against a Lascannon.  Leviathan is a bit more consistent damage mitigation as it also works on mortal wounds, but Jormungandr gives more deployment tricks.   Hydra is also not a bad choice here as while it does not directly benefit Tervi, it certainly makes the Termagants even better.  Being able to pump out up to 90 S4 shots that reroll 1s to hit and to wound, and then charge in for 30 attacks that hit on a rerollable 4+ makes the Termagant a create chaff killer, all while also being great chaff itself!  The Tervigon just turns these little guys up just a little higher while providing precious Synapse. Let’s not forget sweet stratagems like Caustic Blood as being able to replace losses on a unit that shoots and can cause mortal wounds when it dies in melee is just super awesome for a chaff screen.  Really, Termagants make some of the best chaff in the game, even with just Fleshborers, and being able to heal a unit makes them even stronger.

In terms of defense, Kraken isn’t too bad for the super fun Relic of Chamelonic Skin for a nice -1 to hit.  This does stack with the Malanthrope, and now you have a big beasty that is -2 to hit.  That definitely changes the math on even Guilliman’s gunline, and that makes those 14 wounds go even farther. You can also make the Tervigon your Warlord and give them the sweet Adaptive Biology Warlord Trait for reducing incoming damage by 1.  Coupled with Kraken and a Malanthrope, that is some serious defense, and now we are at the point where shooting at the Tervigon becomes more of a waste of your opponent’s resources than any tactical advantage.   Heck, if you really want to ensure that the Tervigon does not die, you can throw on Catalyst too for the 5+ Feel No Pain, and now, that Tervigon isn’t going anywhere.

I’d avoid going Kronos with the Tervigon as the Tervigon’s main benefit to buff Termagants, and the buff becomes redundant.  Really, you want to look at Leviathan, Jormungandr, and Kraken.

The Tervigon also has some offensive moves, not a whole lot, but enough to catch your opponent off guard.  As a level 1 psyker, you have Smite, which is never a bad thing, and you also have another delivery method for Psychic Scream.  While you can’t fire off both, your opponent may expect that power from somewhere else and position poorly.  Catalyst is probably better though to either increase its durability or help keep the chaff screen around even longer.  The Tervi also packs a short ranged heavy bolter (but with 4 shots), so this can help just peel off a model from a unit. Finally, the Tervigon also packs Monstrous Scything Talons, so it has the big D6 damage, and the Tervigon is the only HQ choice to actually pack a D6 dmg weapon, and this can be clutch in a late-game scenario or to pop a transport that is getting into your lines.  Still, the offensive output of a Tervigon is not great.

Just like before, spawning Termagants, while having to pay reinforcement points, isn’t a terrible idea.  In the late game, a Tervigon in a pod with a few points left over can drop in via Tyrannocyte to a less busy part of the board and then next turn, pump out a unit to claim an objective. While this expensive, it can help you win the positioning war that starts on Turn 3.  I am also still a fan of the idea of dropping a mobile firebase with a unit of 30 Devourer-Gants and a Tervigon on turn 3 and dominating a portion of the board with a unit that shoots like hell and can revive some of its losses via the Tervigon.  Again, Jormungandr is great for this as it gives some added defense to both units and it allows for cheaper transports via a Mawloc for the Termagants, which saves you a few points over a Trygon or Tyrannocyte.  Throw in a Malanthrope with a Ravener escort, and while expensive, this is essentially a big piece of your army that gets to appear on Turn 3 without fear of losses.

Of course, the Codex-Gods have not been that kind to the Tervigon.  Quite simply, it is very expensive for what it does.  While T8 and 14 wounds with a 3+ save seems impressive, it really isn’t with how lethal this game is.   Without an invulnerable save, the Tervigon is likely rocking a 6+ save against most weapons that are going to hurt it, which is not so good.  Especially since the Tervigon is a large model, it is very difficult to get it a cover save or keep it out of Line of Sight.  Any dedicated firepower is going to start rocking the Tervigon’s world pretty quickly.  It requires that you really invest in protecting the Tervigon, which can become points inefficient.

At its optimal defensive form, Kraken with Catalyst up, Chamelonic Skin, and Adaptive Biology with a Malanthrope nearby, you have a resilient unit, but that is also investing about 400 points into a single model that offers only force multiplication for a specific unit type and has not great offensive output.  This also means that your only Catalyst is on the Tervigon but not a Swarmlord or a unit of Genestealers, all units that are more or less in the same price ballpark but do much more damage on the table. That’s really what it comes down to: if the Tervigon could do more on its own in terms of combat, it’d be a great unit like say a 3+ WS and more attacks to make use of that sweet Dmg D6.  The fact that it can take Crushing Claws but has no way to really get any decent accuracy out of it just seems like bad synergy to say the least. 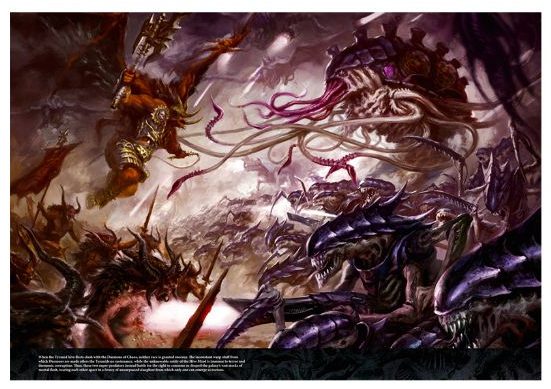 Again, the Tervigon really only makes Termagants better, and Termagants are great, but a savvy opponent will know to kill the Tervigon to tone down the little bugs as well as do some bonus mortal wounds to the unit, or if you invest into super protection, just gun down the little bugs as the Tervigon isn’t going to do that much damage on its own.   If the Tervigon was just cheaper, under 200 points, it’d be a great addition to any horde army or any army that wanted to use Termagants, but at just about 250, you can just get another 30 Devil-gants with a little change left over. I’d rather rely on Neurothropes or even Primes for Synapse and then have more points for the Devil-Gants as that’s really where the punch is, and I’d rather have 180 shots hitting 50% of the time versus 90 shots hitting 58% of the time. I’d also rather have 60 models that are fuel for Caustic Blood or Single-Minded Annihilation rather than 30 models with the chance to add 10 back per turn.   I do hope that in the next Chapter Approved that the Tervigon either gets a big boost to its offensive capabilities or gets a points drop.  The model is awesome.

Even in my preferred method of surprise Tervigon and kids, that loadout costs around 900 points. That’s almost half a standard army, and well, it is really isn’t going to win me the game against most other competitive lists, and it is asking 1100 points to survive against 2000 for 2 full turns.  It is a fun way to play the Tervigon, but the emphasis is on fun, not winning.

Overall, I have to say the Tervigon is still not suitable for competitive play.  I am going to give it a grade increase to a barely, just barely passing 70 of 100.  You can make it work when you really invest into its protection, but then I am pretty secure in my assertion that there are simply more efficient and optimal ways to run the bugs, and these ways do not include the Tervigon. The new Hive Fleet traits really help it, but still not enough for me to prioritize a Tervigon.  I will either make room for a Swarmlord or save a few points by taking 30 Devil-Gants or 20 Genestealers instead.

Thanks as always for reading, and I’ll be back soon with everyone’s new favorite bug. As always, go check out what we do over at TFG Radio, and remember, LVO is barely more than a month away! Come say hi!