40K: Shadowkeepers of the Custodes and Other Secrets

The Shadowkeepers guard an ancient prison buried deep beneath the Imperial Palace. What other secrets await?

Happy Sunday everyone. Today let’s take a look inside the Adeptus Custodex, diving into a little bit of the lore that you can find hidden within its gilded pages. We’ve got five nuggets of lore to digest in this post, so let us all give thanks to Robert C. Baker, the famous Cornell Professor who gave us that gift of mechanically recovered meat mixed with anti-foaming products reconstituted meat slurry and extra chicken skin for its binding properties and get ready to bite into these spicy-breaded Lore Nuggets.

First up, we have a look at one of the new “orders” of the Adeptus Custodes, the Shadowkeepers. Led by the Lock Warden, the Shadowkeepers maintain the Dark Cells which are prisons buried deep beneath the Imperial Palace on Terra. Here they stand watch over terrors that lurk deep within the lost history of the Imperium. Horrors from the Old Night, which cannot be killed, are guarded in their cells. Watched over by the vigilant veterans of this Order. 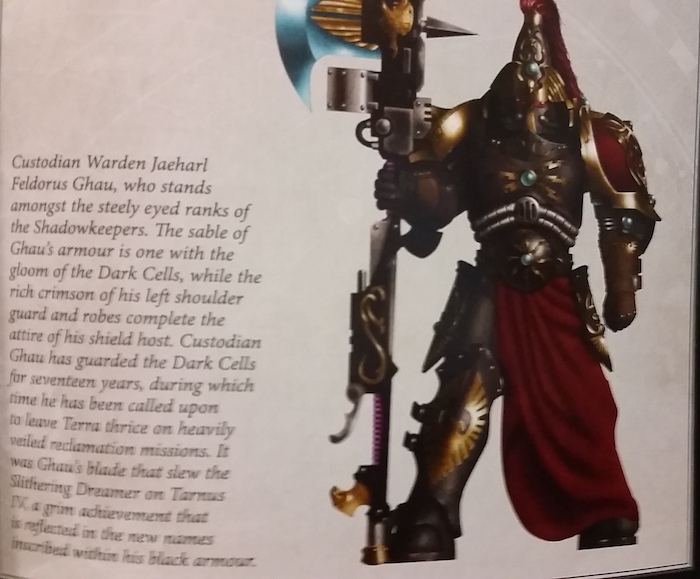 Although now that the Cicatrix Maledictum has opened up, more and more members of their order have been spending time off-world, dealing with dire threats to the Imperium, leaving the vaults at less than full capacity for longer and longer stretches…

Speaking of the Custodes going off-Terra, let’s talk about that. Previously it had been revealed that during the massive warp storms that cut off the Imperium from itself, there was a massive Khornate army which attacked Terra and was only stopped by the combined forces of Guilliman, the Custodes, and the Sisters of Silence.

In the wake of this attack, and, more importantly, behind locked doors, Captain-General Trajann Valoris and Guilliman ratify a formal amendment to the role of the Adeptus Custodes. They’re still to guard the Emperor, but now, they have seen that an extension of their duty requires them to go out into the galaxy to defend Terra. So now they are “greatly extending” their extra-solar activities.

The Companions will of course remain. The 300 Custodes who personally guard the Emperor’s body, standing in a ring, never sleeping, always poised at attention and ready to go–the silent company they are called–they will remain there. But that still leaves plenty (more on this in a minute) of Custodes who can theoretically venture out. But not all of the Custodians remain in the Silent Company for long. The longest record of this service is held by Astoran Kalos who endured 100 years of constant vigilance before surrendering his place among the silent ranks. Which makes my legs cramp just thinking about it.

Which brings us to our next nugget: Custodes don’t get old. They eventually just sort of wear out and they start suffering a drain on their bodies that renders them unfit for duty. Things like their reaction times being 1/10th of a second slower–irrevocably ruined in the eyes of their fellows. And so, burdened with such shameful degradation, they voluntarily retire. Retired Custodes are not, as you might think, taken out somewhere nice and shot–but instead they are given a simple black robe and then they jst sort of disappear into the universe, never to be seen again–becoming eternal immortal spies that serve as the eyes and ears of the Emperor. Well. The Custodes at any rate. The Emperor doesn’t exactly have eyes. Being mostly dead.

Speaking of being only mostly dead, one of the big rumors mentioned in the book is: Konstantin Valdor might still be alive. And I think you know what that means.

It’s only a matter of time before he comes back. Until then, I hope you’ve enjoyed your breaded and fried knowledge slurry. We’ll be here all week with the new Adeptus Custodex, check out our games on Twitch where we’ll be pitting an army of these guys against whatever we can throw at them. We’ll see who comes out ahead.

You know, for an eighty page codex, there’s sure a lot of punch packed into it.

Author: J.R. Zambrano
Bell of Lost Souls Staff Writer and DM, J.R. covers RPGs of all stripes and on occasion eats sandwiches. You can ask him about either at [email protected]
Advertisement
Adeptus Custodes Games Workshop Lore Warhammer 40k
Advertisement 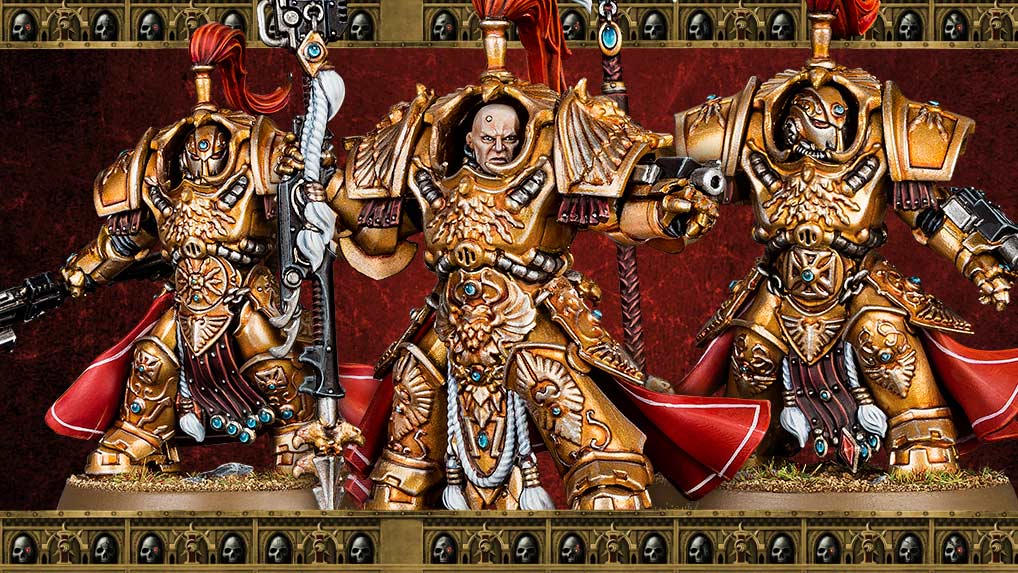