The Thousand Sons Codex is up for pre-order. Come take a look inside.

Rubric marines! Tzaangors! More psychic powers than you can shake a stick at–which, incidentally is 14 psychic powers. More than that and you just can’t get all of them with the stick. Don’t ask me why, they’re not that big, just squirrely I guess? Look I don’t make the rule, but they are immutable and carved in stone. And the Thousand Sons have access to 18 powers, so, you need two sticks if you want to shake them at them.

But more likely you just want to hear about what’s inside the codex, which you can do by clicking on these here videos. First there’s this one, where we go through unit by unit and talk about them.

Then there’s this one here, where we go through the relics, stratagems, warlord traits, and six of the 18 psychic powers. So you can shake a stick at this video if you want, though I’m honestly not sure what you’ll get out of it.

At any rate, there’s the Thousand Sons for you. You’ll doubtless catch that we talk about deep striking Magnus, which we know you can’t do anymore, but–the larger point here is that this Codex gives Chaos Players of any allegiance, a ton of new synergies and tools that they can spread across units. Need to compensate for a unit’s fragility or slowness? You can.

Want to capitalize on a unit’s strengths, maximizing efficiency? Got you covered. This is a pretty cool and flexible codex, all in all. It broadens the tactical toolbox that Chaos can take, and for a dedicated Thousand Sons army, there’s even more to glean. We particularly liked the fact that there’s a few different ways to build your Thousand Sons armies. The army is flexible, and potent. Definitely worth checking out.

Wreathed in warpfire and imbued with boundless empyric energy, the Thousand Sons are the favoured mortal servants of Tzeentch, the Weaver of Destinies. What soul remains in these Heretic Astartes is consumed by a desire to see the Imperium burn. An aura of maddening flux radiates from the psychic core of the Traitor Legion, twisting hope into despair. As their warp presence flares ever brighter, time shifts unnaturally, stretching seconds into seeming eternities and crushing seconds into fleeting moments.The only anchors to reality that remain are the racing heartbeats of the fearful and the incessant pounding of Rubric Marines advancing in perfect unison. Whole swathes of realspace are left burning in the Thousand Sons’ wake, yet each battle is but a single step in a larger plan, a lone ripple in the corrupted stream of fate.

The thousand sons will always be graded on a pretty harsh rubric though.

Tabletop Gallery: Trouble From Below 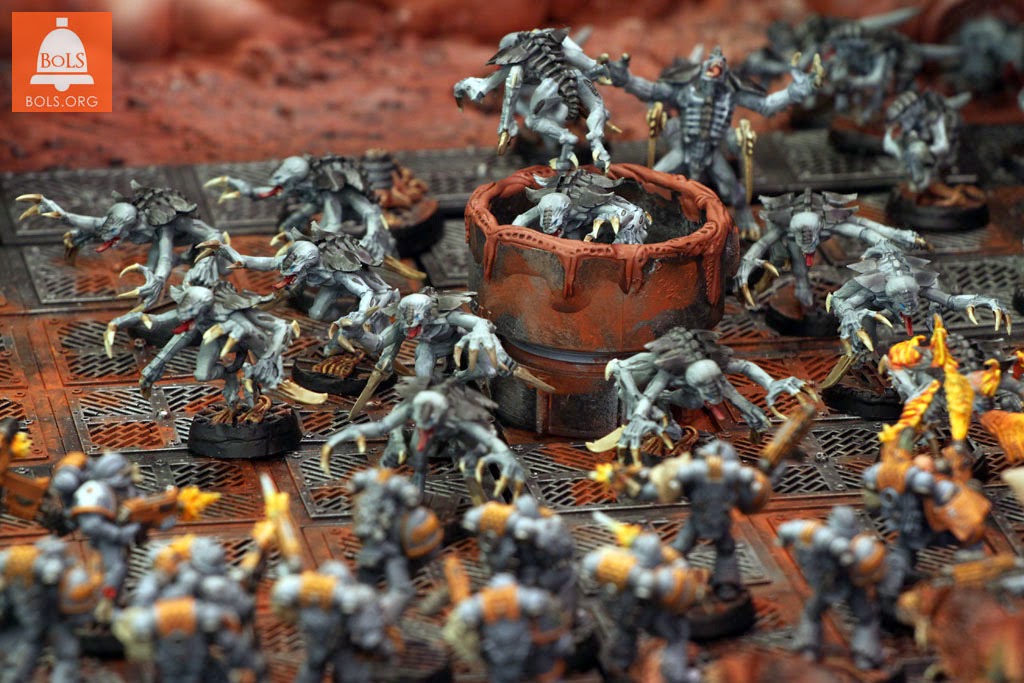