Start the new year off with a look at expanded exploration in 5th Edition.

If you’ll recall, when Mike Mearls took to reddit to answer what questions the Internet would ask of him, one of the topics that bore much fruit was the subject of Exploration. The third pillar of D&D’s experience, exploration is all about player characters encountering new things in the world. Mearls reframed it thusly:

Discovery is a great way to think of it. Clarifying exploration as more about learning new things in the world makes it a little easier to seed an area. Rather than uncovering tiles on a map, this casts the idea that players (and their characters) will find ways to connect to the world, piece by piece. It engenders immersion and ownership of the game.

And with these ideas in mind, Mearls wrote up a guide to Exploration for his Nentir Vale setting. It’s a bit bare bones at the moment, but is a good place to start, ahem, exploring the idea. 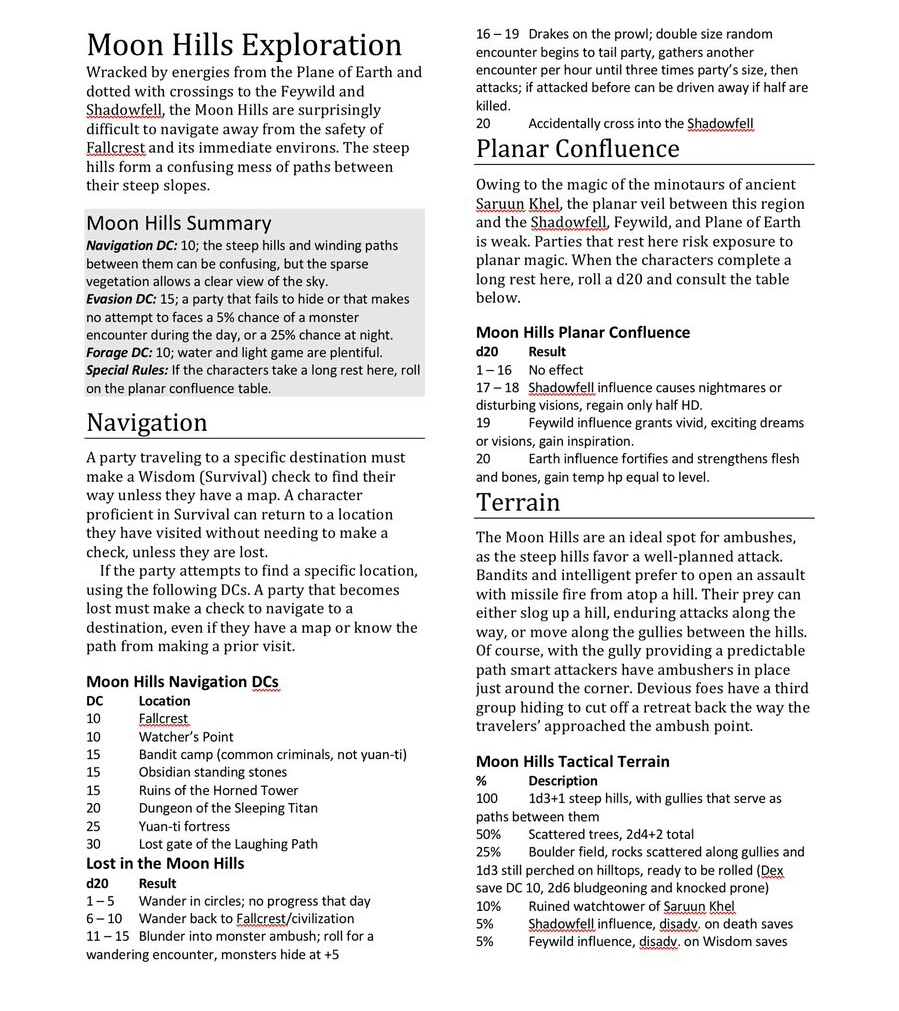 As you can see, the idea is to have challenges and encounters in mind for each region. Players decode where they want to go, check to see if they get lost along the way–if they fail their navigation check, they run into difficulty by region–and when they have an encounter (the one they seek or otherwise) there is terrain etc. there to help construct a unique area.

You can read the full writeup in the most recent Sage Advice. But there’s some insights to be gleaned from the intent here:

Basic goal is to make getting somewhere feel interesting, and each region in the Vale come with a unique character. In my version, the minotaurs of Saruun Khel used a lot of planar magic, so each region is attuned to a different set of planes.

It also means that I can’t just throw in a random, mundane forest. Either history, strange magic, or the presence of a creature (dragon, angry treants, tribe of orcs with a thing for ice magic and taming and riding winter wolves) gives each region a distinct flavor.

Letting the party go where they want will likely get them in more trouble than could otherwise arrange for them. Let them find paths to weird, dangerous places – they will go there.

This whole idea simplifies outdoor travel. Players set off with a destination or purpose in mind–an excellent guiding principle for a hex-crawl campaign. But even in a more linear adventure, this allows players a great deal of agency. Have them learn of the destinations they must go, them avail yourself of this system that gives you a process through which to elaborate the journey. More importantly, it teaches players how to explore the world.

Once they know how they might brave the uncharted wilderness, or what it takes to venture into the ruined temples in the haunted woods–it’s easier to stay taking initiative. This is only a brief outline, but its presence in Sage Advice makes me hopeful that we’ll see it in some later Unearthed Arcana and perhaps even future supplements. Especially with a book on the horizons that opens up the Planes themselves.

Exploration is an interesting concept in games–there’s no one way to handle it. But if done well it can invite your whole group to take the world into their hands.

How do you handle exploration in your games? What do you think of these rules?