Defend The Earth Against Alien Invaders In ‘Chronicle X’ 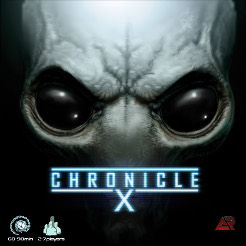 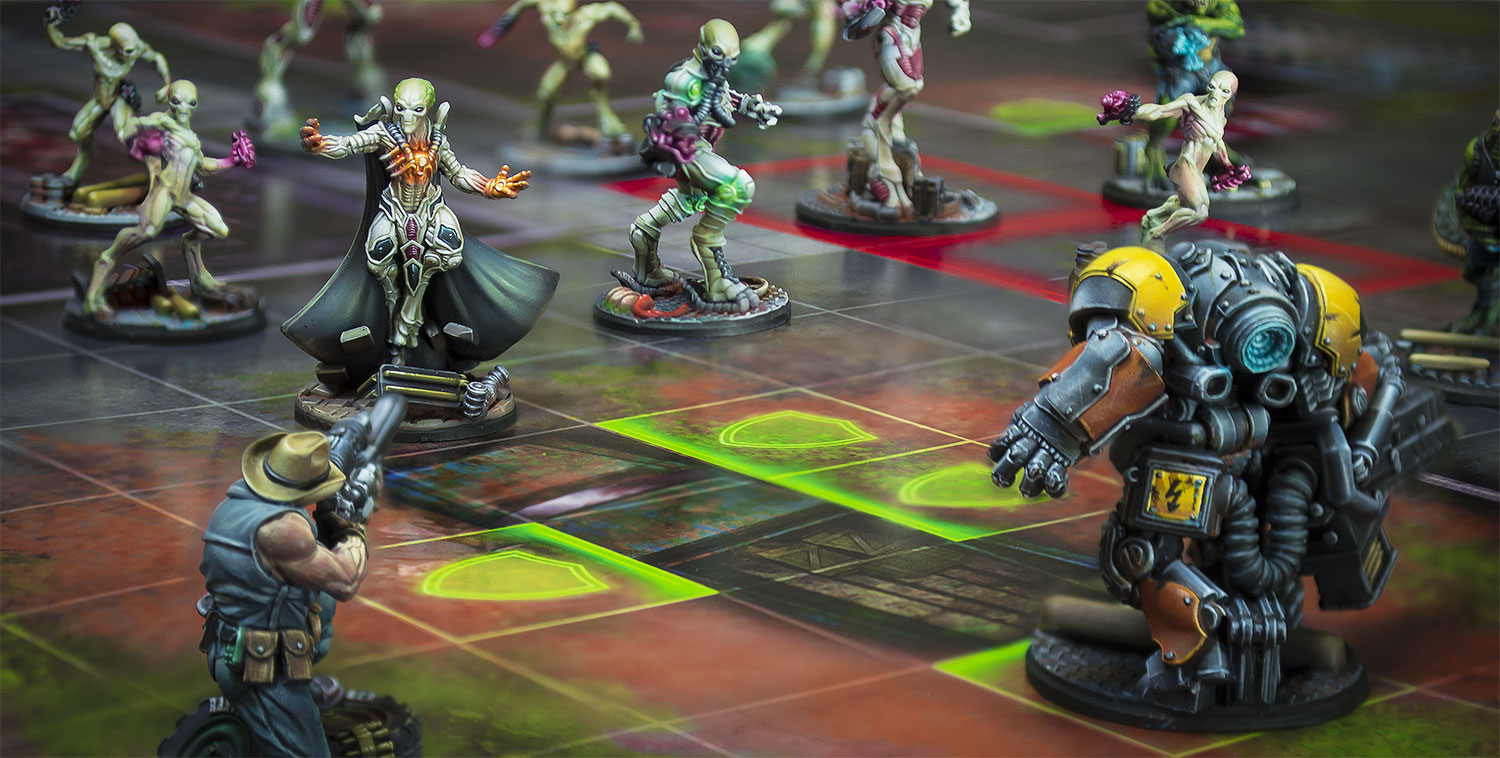 Build your base, scavenge for resources and battle the invading aliens!

Chronicle X is a 1-7 player tactical board game, set in a Sci-Fi Retro 1980s, tasking players to either control the daring men and women that make up the military organization, Chronicle X, or the Overmind, a ruthless and cunning alien overseeing the invasion of Earth and the end of all human resistance. The Chronicle X player(s) have a diverse group of heroes to choose from to form their squad, but must also manage the expansion of their base of operations, using what scraps and materials they can to secure a foothold on the planet. The Overmind player has a cadre of alien troops to choose from to overwhelm the Chronicle X players, ensuring they will never save Earth. 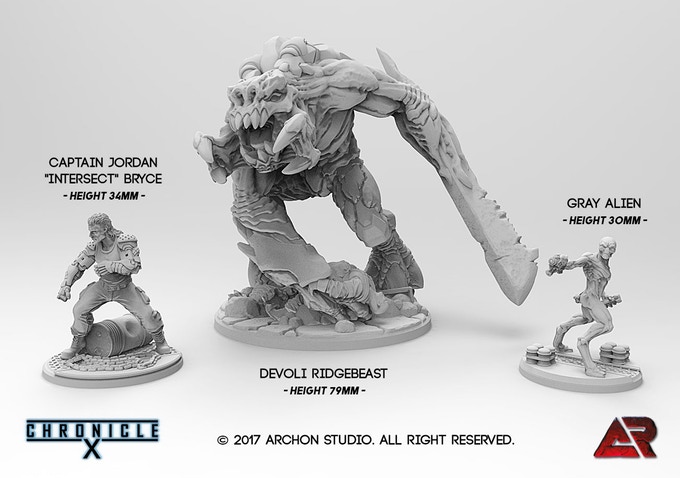 HEROES: Humanity’s only hope for survival rests in the hands of a ragtag group of larger than life soldiers, scientists and terrorists. All the information a player needs to know about a hero is featured on their profile card, including special abilities and equipment. Each hero has a piece of signature equipment unique to them that can be upgraded throughout the course of the campaign. Heroes can also store equipment in their backpack, ready to use whenever battlefield conditions warrant it. 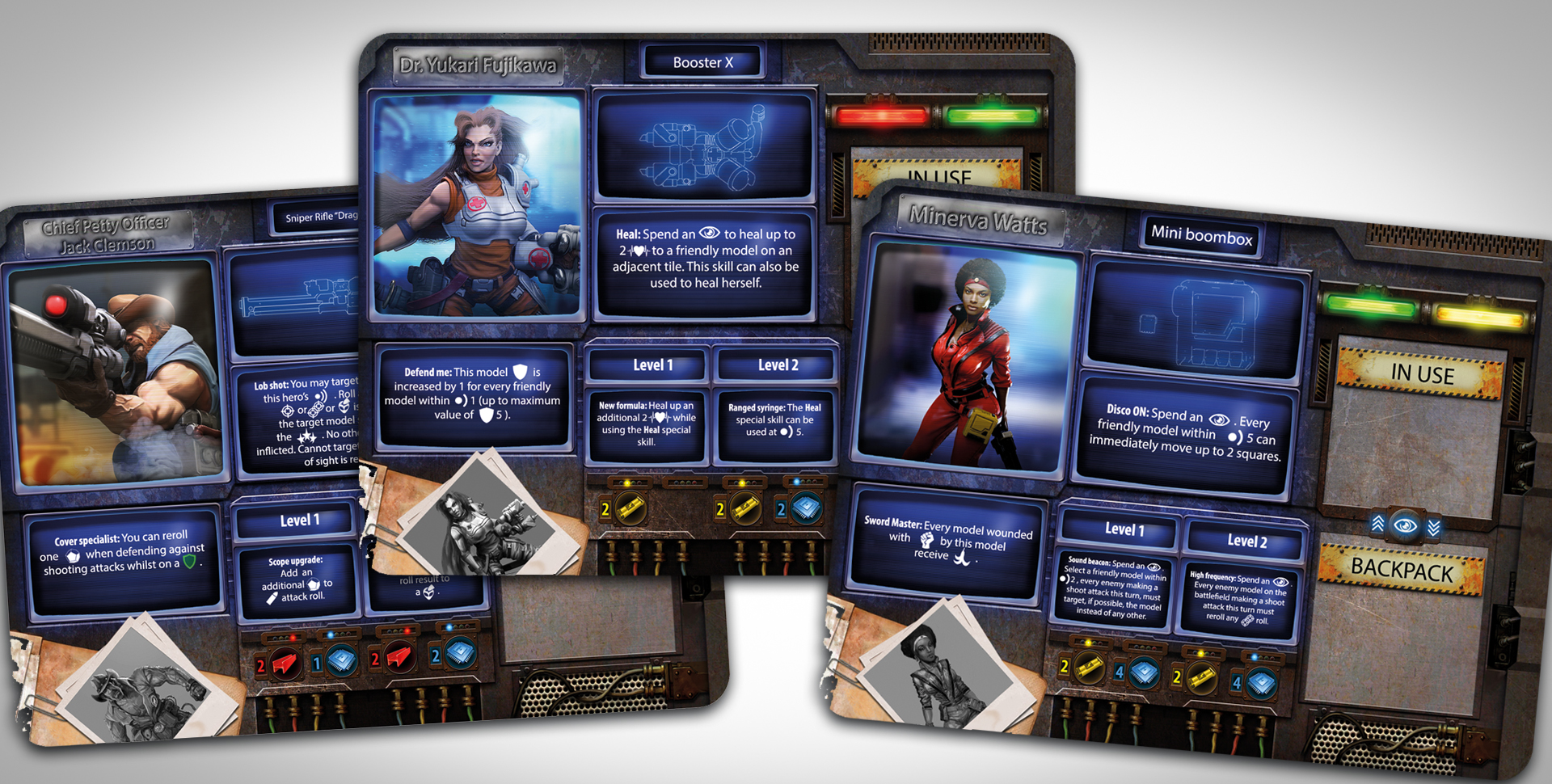 BASE OF OPERATIONS: Chronicle X’s base of operations is an important advantage for the heroes between (and sometimes during) missions to sway the battle in humanity’s favor. Using scrap components found during their missions, the heroes can build new rooms such as the Med Bay to fully heal their heroes before battle or the Communications room to allow them to alter the difficulty level of their upcoming mission. The heroes must use their rooms wisely as the Grays’ army grows stronger with each mission. 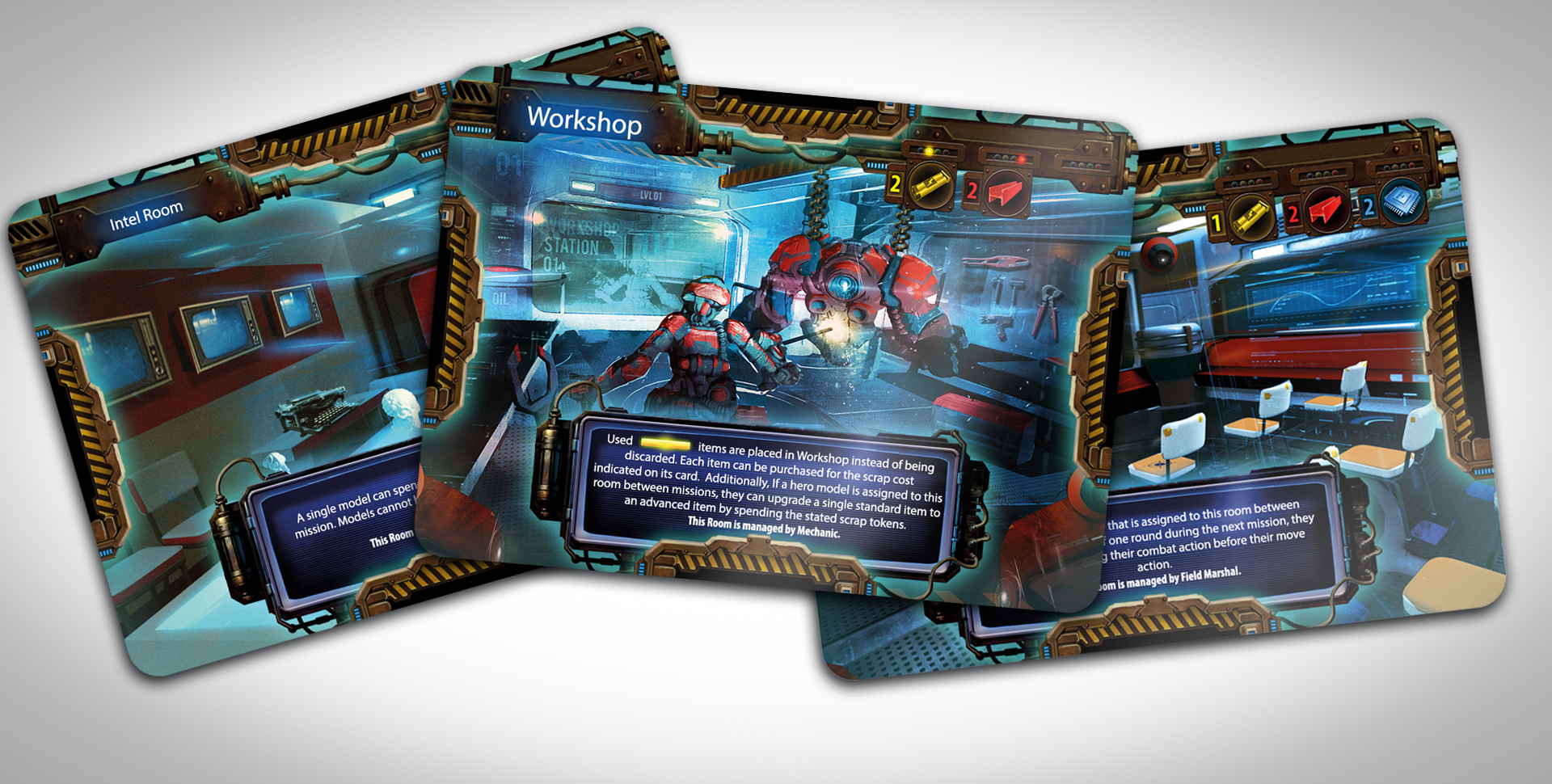 ITEMS: To aid Chronicle X in its struggle against the invading aliens, players can gather resources and equipment to upgrade their base and outfit their heroes. From items such as high tech bullets and first aid kits to powerful weapons and armor that can be equipped to grant additional combat bonuses, the heroes can find a wealth of items to use when taking the fight to the Overmind. In addition, the heroes can also gather scrap components which can be taken back to their base of operations in order to upgrade the items they have found or even expand their base. 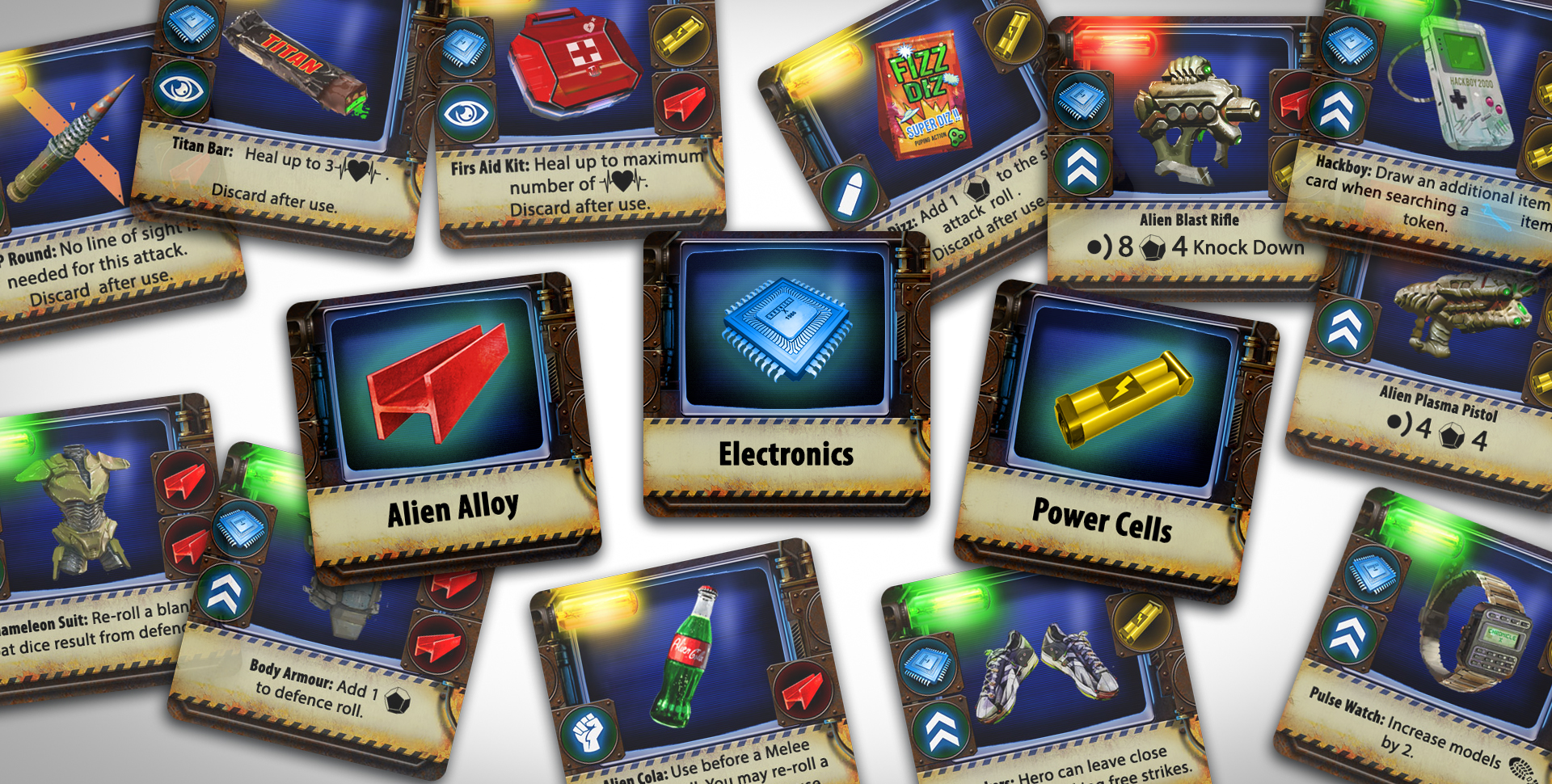 DICE: Both attacking and defending are resolved using unique twelve sided combat dice that feature Hits, Defense and rare but devastating Critical Hits. These combined with modifiers, penalties and unique attack effects, such as Stun or Push, create a quick and intense combat system. Profile cards allow players to monitor their models’ states, such as the hero statistic dial, that alters the model’s combat effectiveness over time as the hero takes damage.

ALIENS: Earth’s defenders must face a variety of deadly adversaries brought from the depths of space to conquer Earth. From the Grays and their Commanders to the savage denizens of Devol, the Overmind player can customize their forces each mission to defeat Chronicle X and bring an end to humanity’s foolish resistance. 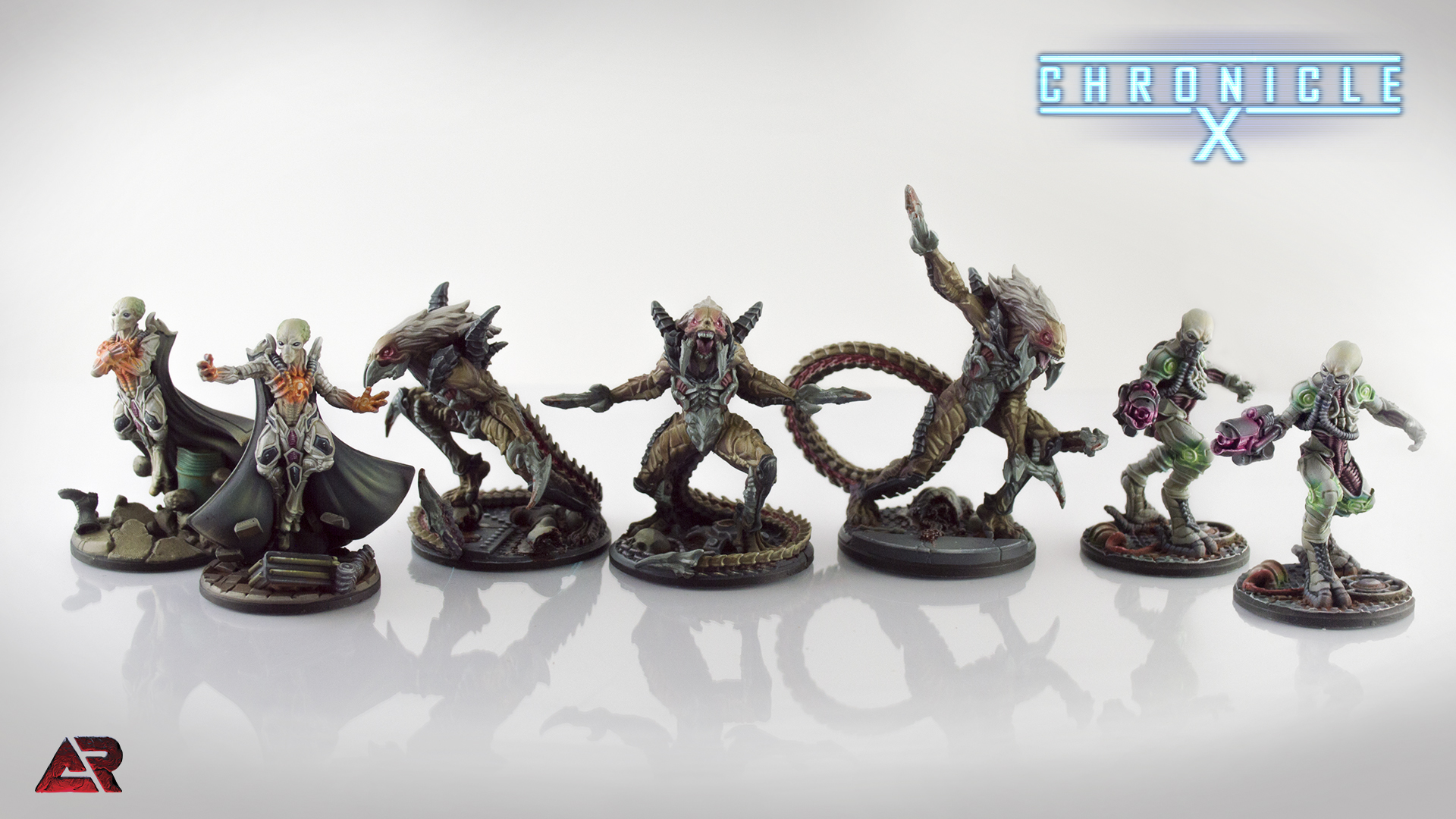 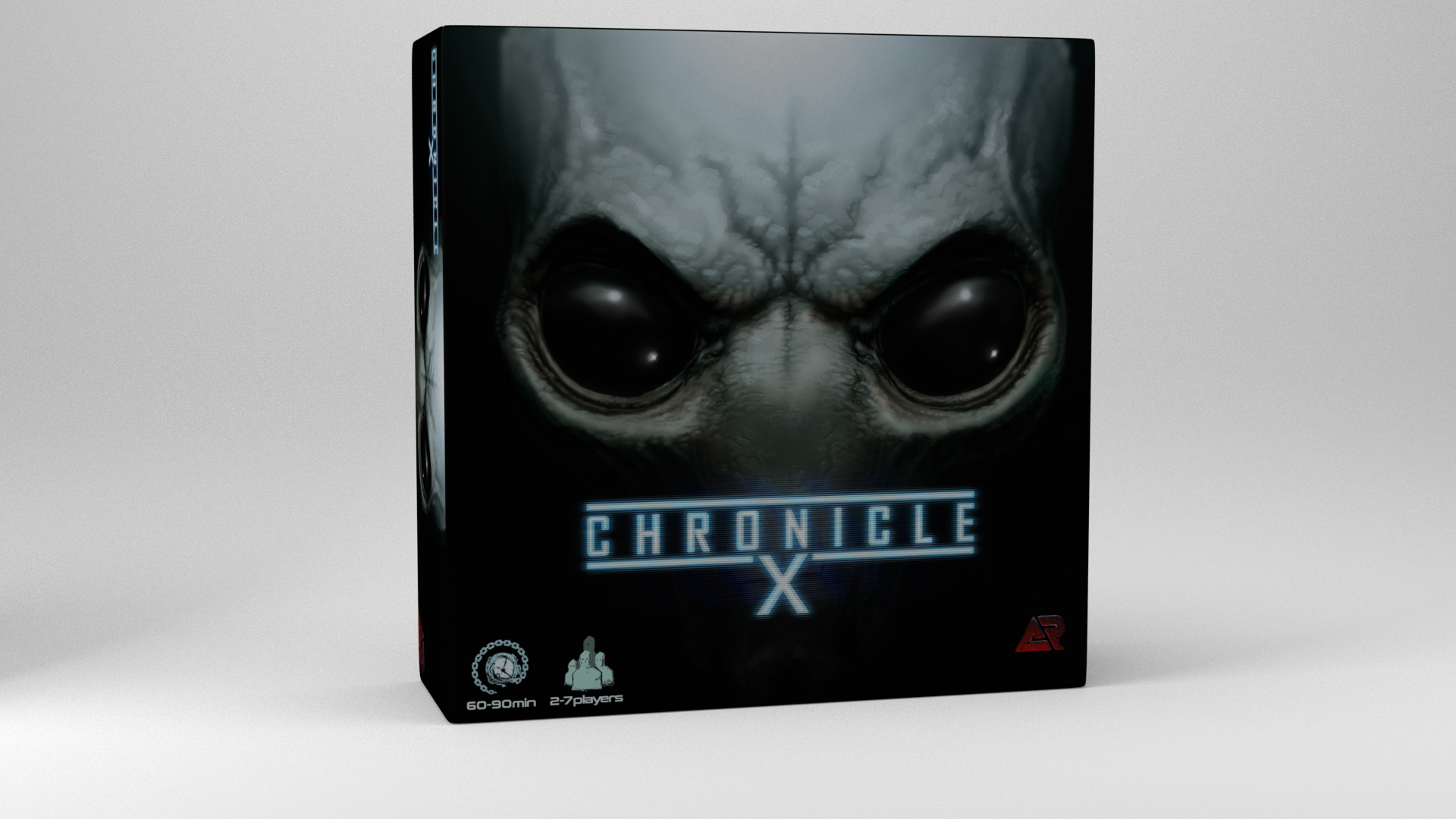 The story of Chronicle X begins after humanity has lost control of Earth. The Grays, an alien species of spies and assassins, crippled the world’s governments, militaries and infrastructure before striking a decisive blow in the form of a full-scale invasion across the planet. All that remains to challenge the Grays is a small group of soldiers, scientists and terrorists known as Chronicle X. Players will determine if Chronicle X is victorious, and humanity is saved, or if the Grays’ tighten their grasp and Earth is lost forever.

Where’s Will Smith when you need him? He’s got tons of experience dealing with aliens. 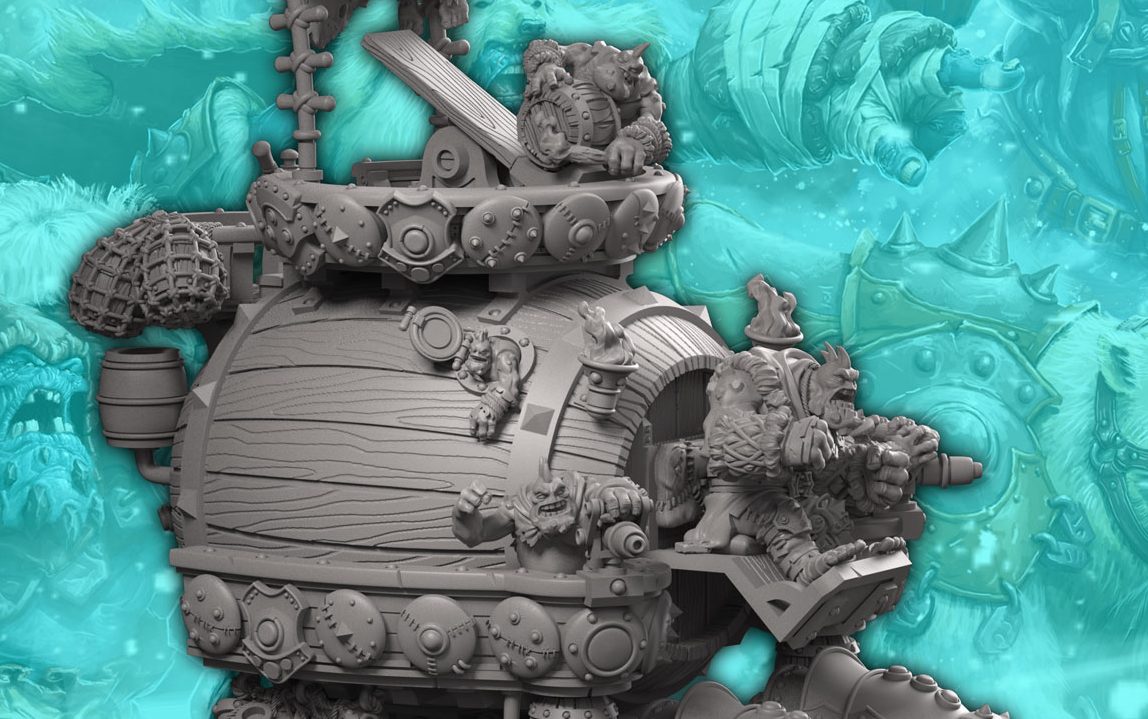