All this talk about upgrade cards has inspired ChahDresh to graph them out, for… reasons. Hey, at least they’re nice to look at.

Some people are visual learners. Some people like math. Everyone likes pretty colors. Nirvana for those types of people is graphs and charts. And what better thing to graph and chart than X-Wing upgrade cards? Yeah, yeah– we’ve talked about upgrades before in terms of what upgrades are best for their type, or which upgrades are doing well in the meta by expansion, but this is going to be different. We’re taking a broader view here. Hopefully we’ll learn something.

Where to start? Well, it sure seems like a lot of recent ships have loaded upgrade bars. Is that really the case? Are we getting more upgrade slots over time?

For this exercise, I didn’t count elite or modification upgrades (which are available to all ships (with some exceptions for elite, but oh well)), nor did I count titles that are an intrinsic part of how the ship works, e.g. Alliance Overhaul for the ARC. Titles you have to pay for, or which change the nature of the ship (e.g. TIE/X7) were counted. The results, below, are the *average* number of upgrade slots per ship in every wave from I to XII: 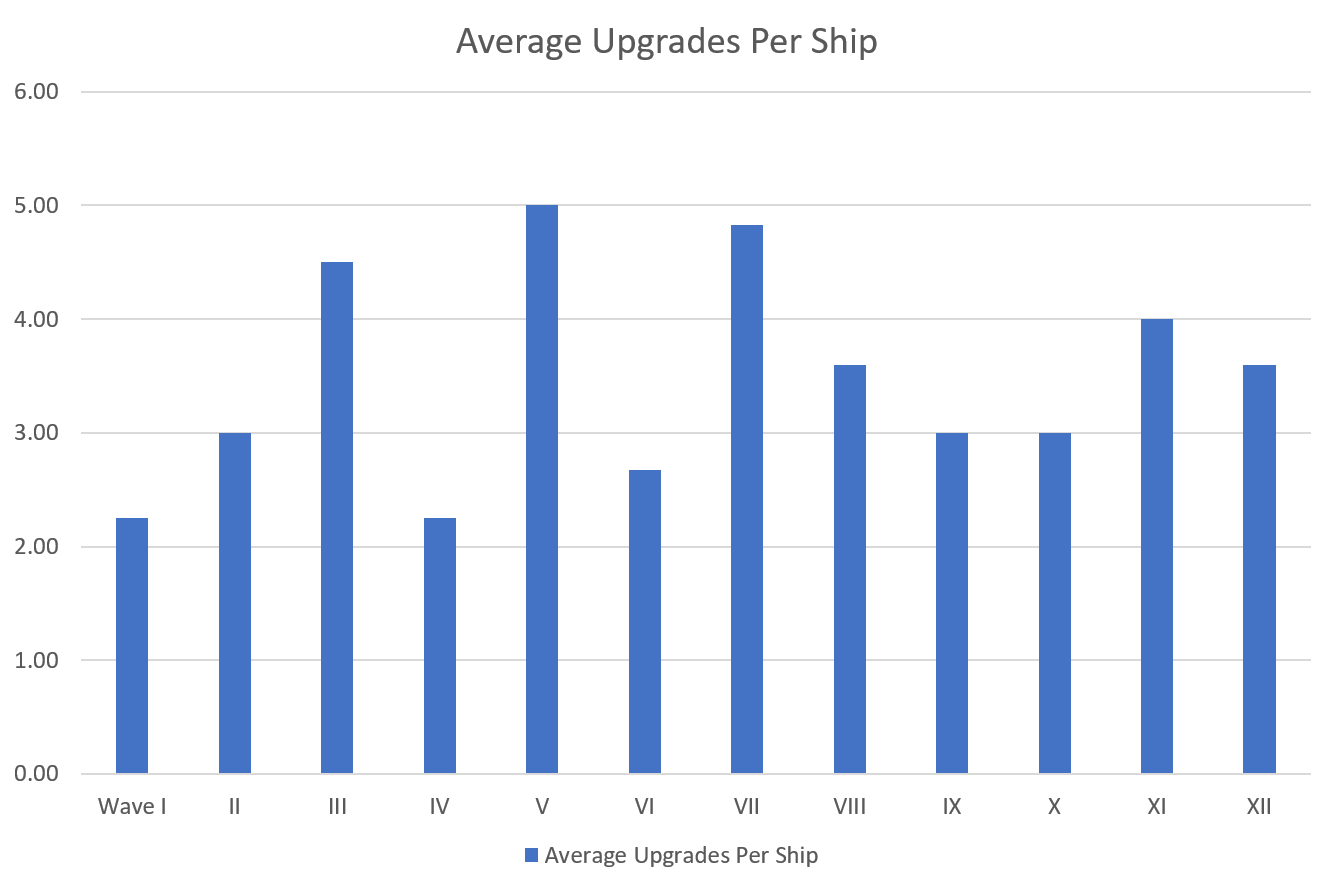 That’s not a huge growth over time, but it is a noticeable up-trend. Ah, but there’s a catch: those are the upgrades available per ship *now*, rather than *at ship release*. The reason for the discrepancy is things like A-Wing Test Pilot– upgrades that were introduced later on in the game’s life, explicitly to adjust game balance. Here’s what the graph looks like if we factor those things out: 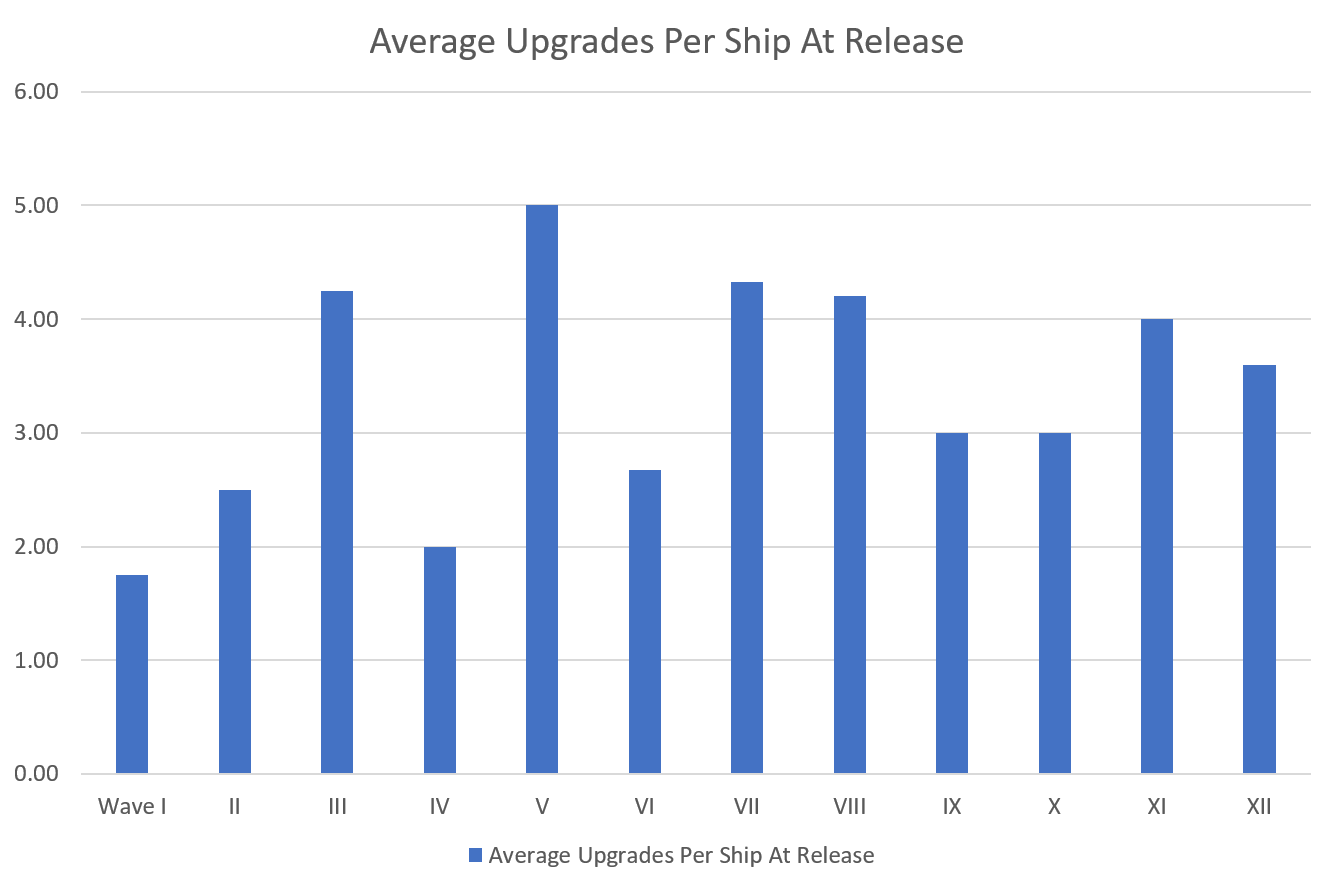 That looks different, doesn’t it? This definitely indicates some upgrade bar creep. Part of this, perhaps, is to be expected. One of the ways FFG differentiates ships is by their upgrade bars, and there are more combinations of upgrades available with more icons on the bars. Waves featuring bombers (VII and XI) also tend to throw the curve. Note the single case– Wave VIII– where the average went down between our graphs. That would be the Jumpmaster nerf.

Oh, and lest you think this is a matter of a few ships throwing off the curve: 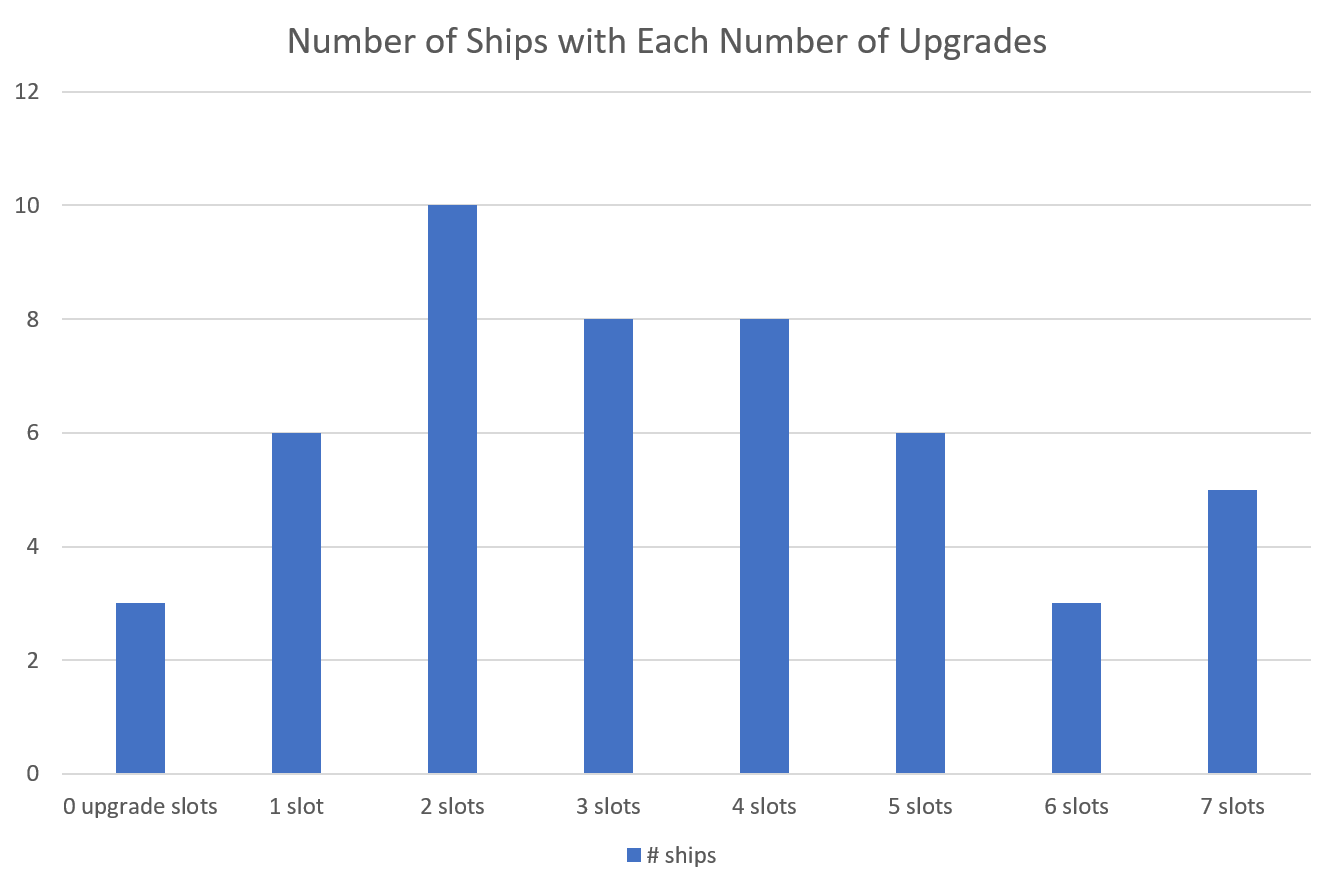 It only sort-of is.

How about a graph of how many upgrade cards there are per slot? 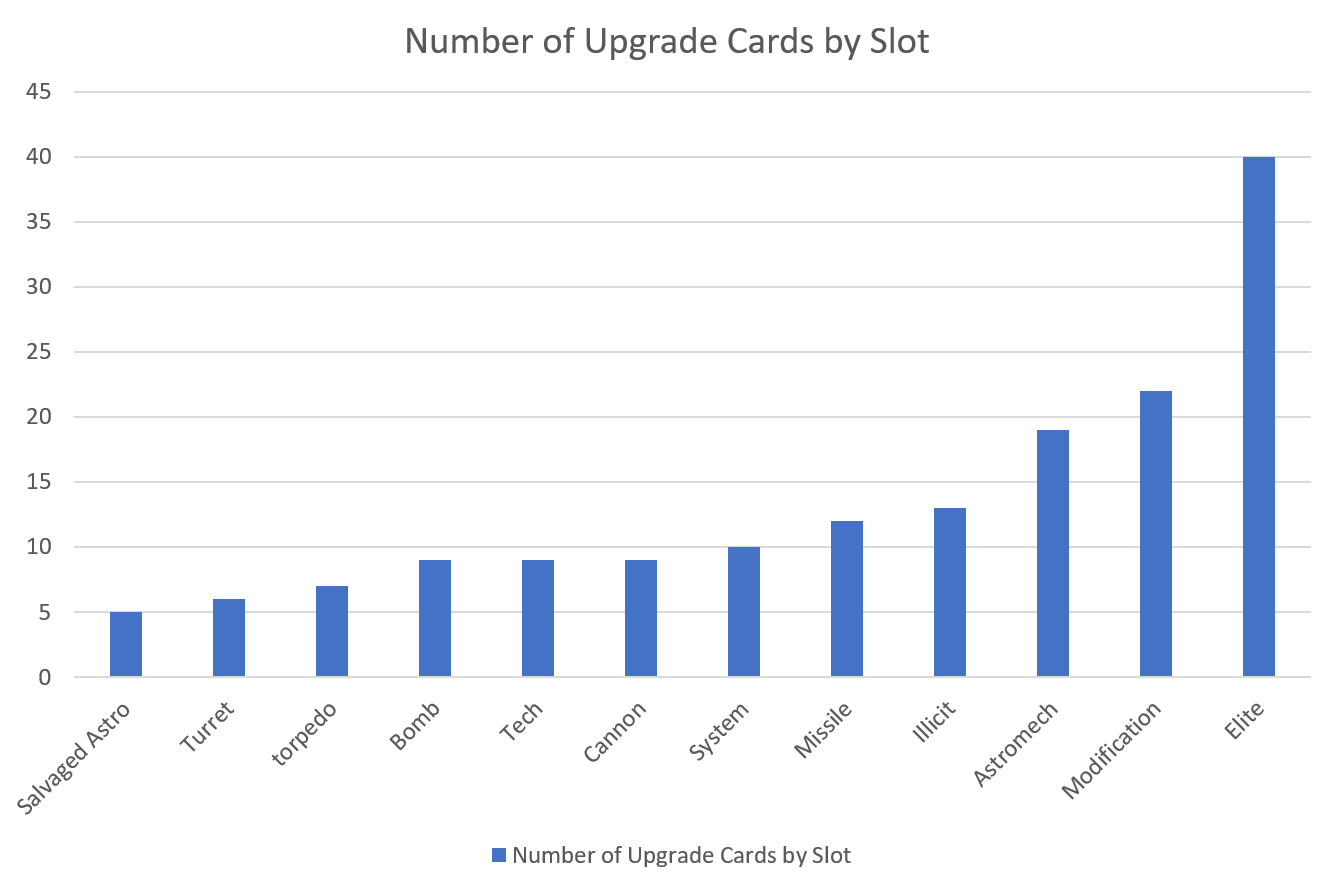 You may be wondering where the “crew category” is. Alas– if I put Crew on the same graph, it would totally blow the curve! There are 70 crew upgrade options out there, although around half are faction-specific. That makes sense– relatively few of the upgrade cards we see have any “screen presence”, meaning the Crew slot is invested with all the character and narrative. Please note that how many upgrades there are in a given category does not necessarily correlate to the impact of those upgrades. There may only be six turret options, but if there was only one and that option was Twin Laser Turret it would still be a game-defining upgrade slot.

Another remarkable thing is just how many more Astromechs there are than most any other category of upgrade. You can understand why there are lots of Elite upgrades: FFG’s rule is to include upgrades for the slots the ship has, and since most every ship has EPT, you end up with lots of Elite upgrades. That’s certainly not the case for droids, which are disproportionately common relative to the number of ships that can field them. 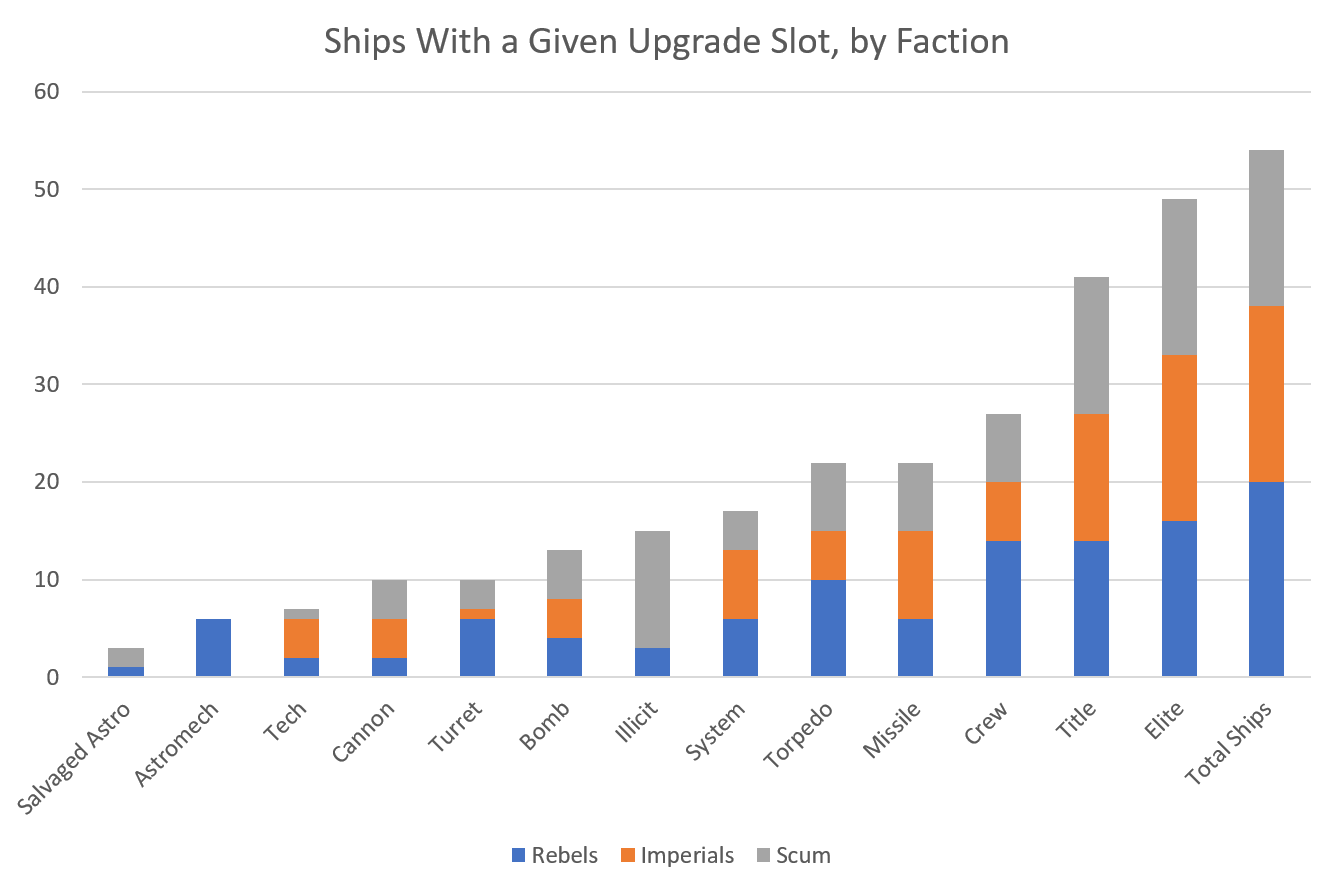 This time I included all the optional cards that allow for slot-swapping. Lots of interesting tidbits to be found here– among them, the fact there are so many titles, far more than you might expect. More broadly, Rebel ships have a large preference for crew, torpedo, turret, and astromech upgrades, while Imperials favor missiles, systems, tech, or no upgrades at all (beyond Elite). One subtler point: out of the 54 total ships, 34 have at least one missile or torpedo slot.

There are certainly plenty of other ways to frame this data, but that should do for now. What, you want me to tell you what it all means? Come on– like all statistics, the primary purpose of these is to serve as argument fuel. Have fun.

~What do you think it all means? 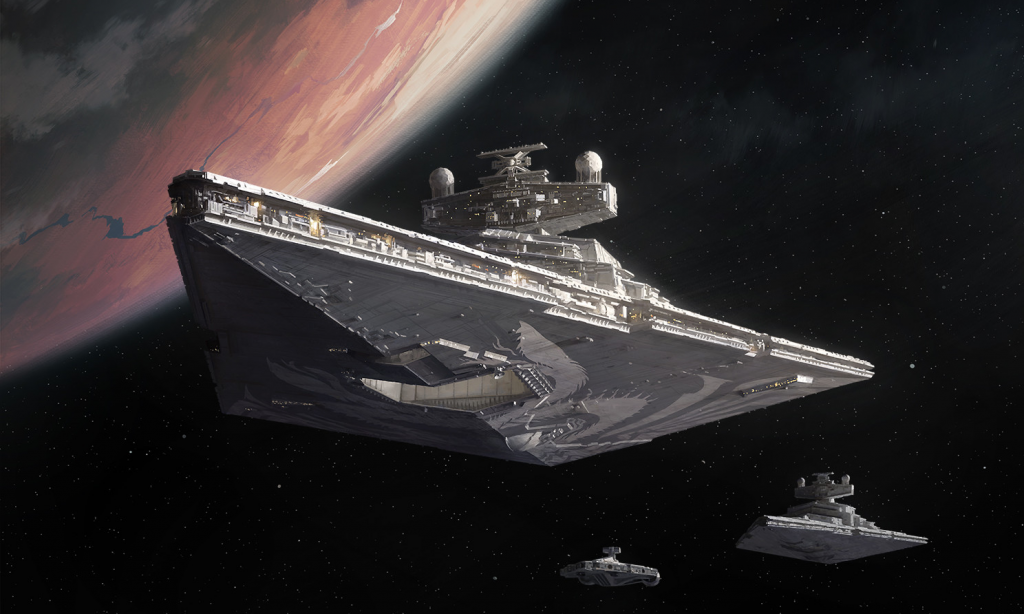