Morathi, Queen of Shadows and her Daughters of Kaine spring forth in all their glory next week.

That’s right folks, Morathi is here. In all her dark resplendence. She is the Witch Queen of the Aelves, but that form hides the truth of her monstrous transformation–a winged, serpent queen… 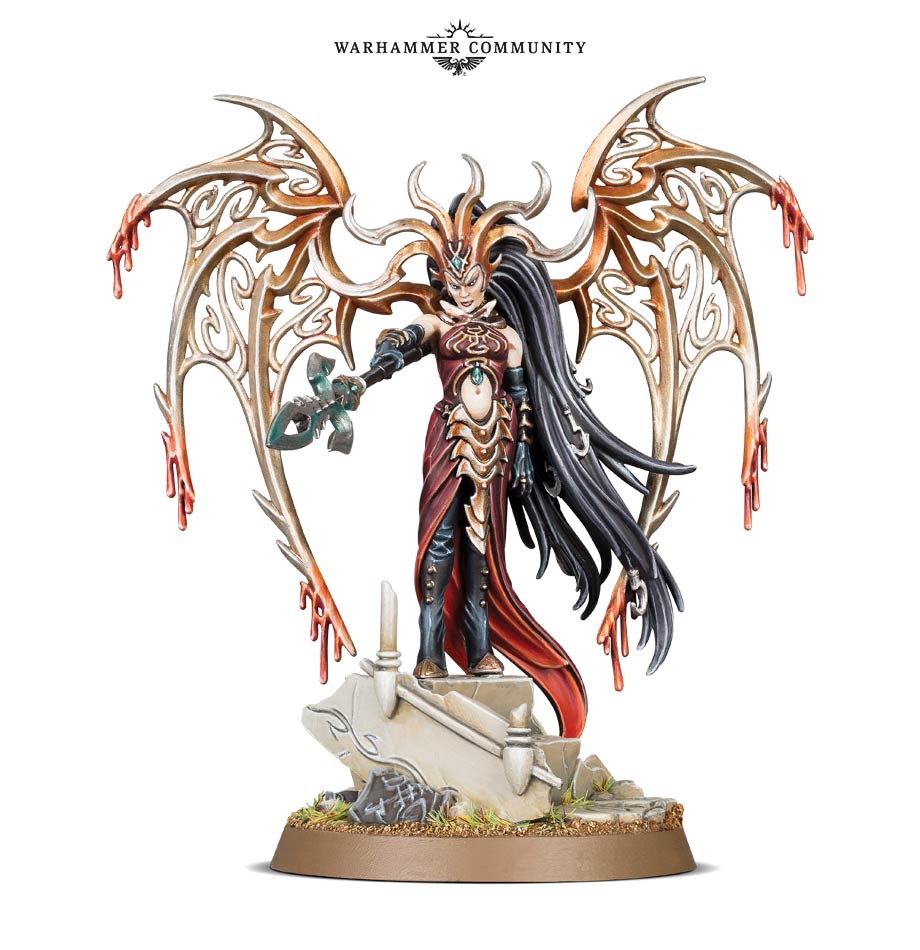 Here she is, standing proudly as a tactician and incredibly powerful magic-user, but, Morathi’s harrowing ordeals in the belly of Slaanesh have changed her.

Morathi is one of the most tenacious of the survivors of the world that was, saved not by the patronage of a god or ascension to godhood itself, but by sheer furious determination, crawling from the belly of Slaanesh and founding a new cult of Khaine in the Mortal Realms.

That’s right, Morathi transforms mid battle. You can decide to transform her, but the heat of battle might cause her to lose control and reveal herself unexpectedly: 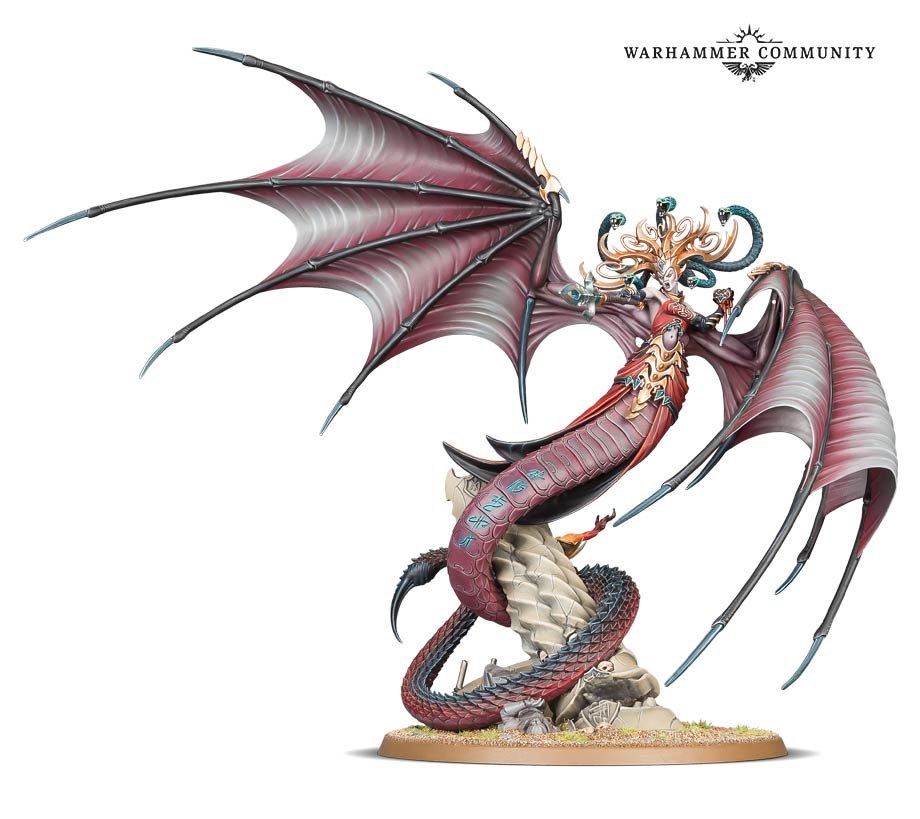 Twisted by the depredations of Slaanesh, Morathi is gifted with horrifying physical might when transformed, shifting from a master mage and tactician into a deadly combatant in her own right. While you’ll start each game with Morathi in her form as an aelven queen, you can choose to transform her in any of your turns, while damaging her can cause her to lose control unexpectedly – much to your enemy’s misfortune.

Morathi’s kit comes with both models, and the complete rules for making the transformation, all of which will be previewed in the coming week. You’ll also get a look at the upcoming Daughters of Khaine, who have their battletome coming out right alongside Morathi. 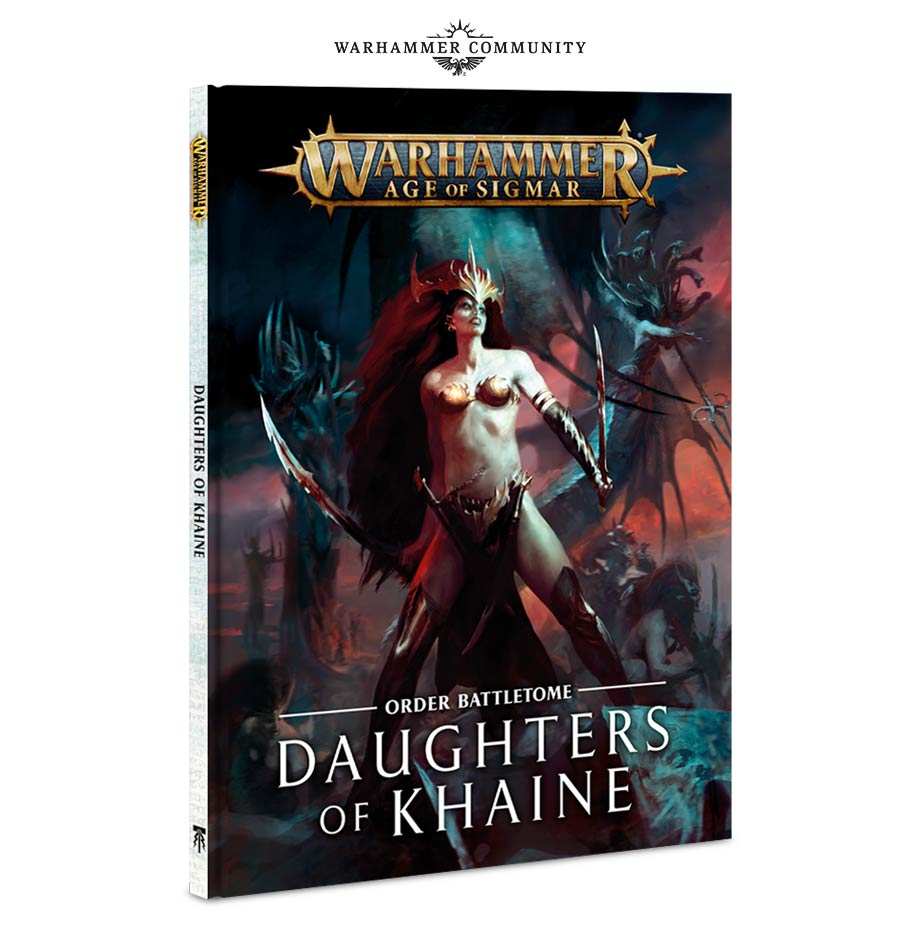 Inside, you’ll find the history of the aelves in the Mortal Realms following the capture of Slaanesh, the story of Morathi’s escape and rise to power in the Realm of Shadow, and an in-depth look at how the cult of Khaine operates, hunting across the realms in search of blood to feed their murderous god – and the Shadow Queen herself…

There’s also a richly realised set of rules designed to bring the Daughters of Khaine to life tactically, offering new ways to build your army under the auspices of particular strongholds of the cults, new units like the Melusai and the Khinerai, allegiance abilities, spell lores and much more besides. You’ll find old standbys like the Witch Aelves subtly tweaked to improve their effectiveness, while some entries like the Cauldron of Blood and Bloodwrack Shrine have been reinvented to properly reflect the mysterious and shadowy powers of their patron. You can even field the Khainite statue that usually stands atop the Shrine as a separate unit, representing an iron Avatar of Khaine. Whether you’re a seasoned player of the Daughters of Khaine or you’re new to the Mortal Realms looking to master the battlefields with low cunning and holy fervour, you’ll find this battletome highly rewarding to use.

All this, plus accessories, cards, and dice in the next week.

Author: J.R. Zambrano
Bell of Lost Souls Staff Writer and DM, J.R. covers RPGs of all stripes and on occasion eats sandwiches. You can ask him about either at [email protected]
Advertisement
Age of Sigmar AoS Order Dark Elves Games Workshop
Advertisement