D&D: Back to Basics – Boxed Rules Are Here Again 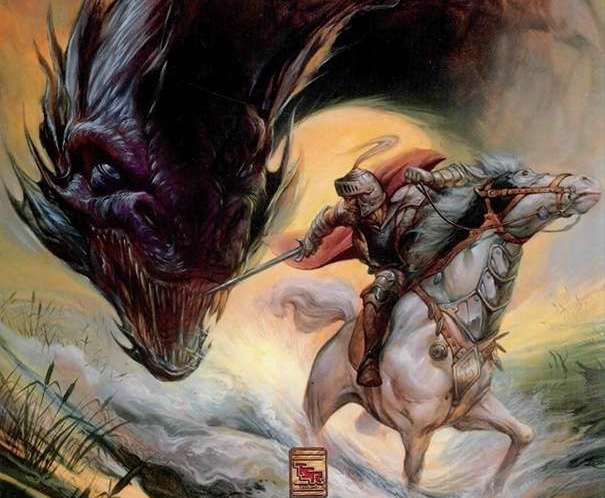 The classic D&D boxed sets–basic, expert, master, companion, and immortal–are back in hard or softcover format.

Take a look around the internet and you’ll find we’re in the midst of the Old School Renaissance, where a number of RPGs are being developed, inspired by the Basic, Expert, or other various boxed editions of Dungeons and Dragons. These are some fairly serious games, things like Adventurer, Conqueror, King, or Stars Without Number–but they all hail from the same source. The old school game itself, Basic D&D (and later expansions).

Now, you can return to the source, with the Rules Cyclopedia providing you access to all of the BECMI editions of D&D in one handy volume. The Rules Cyclopedia was first published in 1991, and now–you can get it through the print on demand function of DriveThruRPG. Really step into the classic rules and grab some of the BECMI-coded adventures (like B12: Queen’s Harvest) to run along with it. Even if you’ve never played a an edition older than 5th, these rules are worth checking out. They’re what made the game, for a while. And you can see how they made the leap from these to AD&D and from there into the future we live in now. 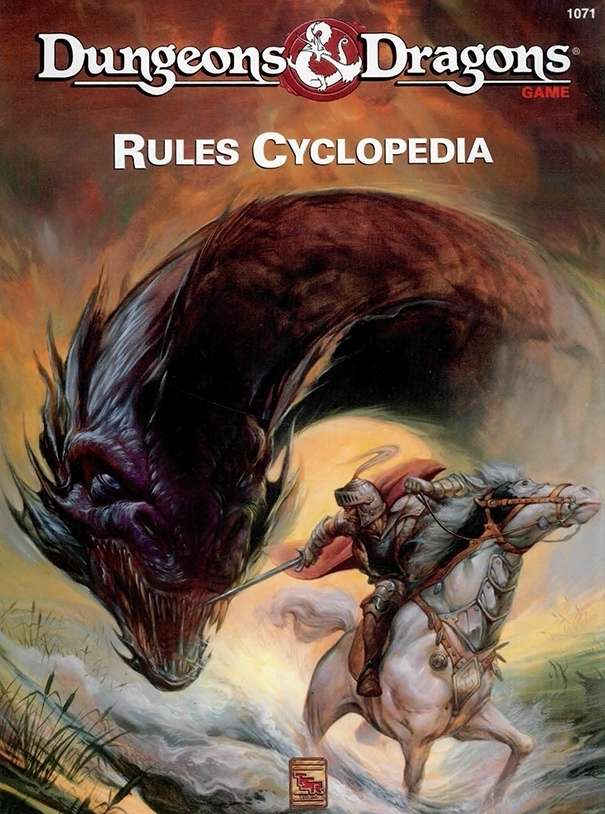 Whether you’re a player or a Dungeon Master, the Dungeons & Dragons Rules Cyclopedia is now the comprehensive sourcebook you need for the original fantasy roleplaying game! For ages 12 and up, the Cyclopedia contains the compete game system and hundreds of features, including the following:

Fully compatible with the new DUNGEONS & DRAGONS Boxed Set, this volume allows players the full scope of fantasy role-playing from dungeons to the Outer Planes. Now, more than ever, the DUNGEON & DRAGONS game is ready and waiting for you.

The Dungeons & Dragons Rules Cyclopedia (1991), compiled and developed by Aaron Allston was the triumphant finale to the BECMI edition of D&D (1983-85). It was published in November 1991.

The End of Basic D&D. By 1991, Basic D&D was TSR’s longest running roleplaying line. TSR traced the history of the game back to the release of the original D&D (1974). Even if you don’t count that, the first game labeled as Basic D&D – the J. Eric Holmes Basic Set (July 1977) – appeared five months prior to the release of AD&D’s Monster Manual (December 1977). It had since undergone two major revisions: the Tom Moldvay D&D Basic Set (1981), which was part of the B/X release, and which kicked off Basic D&D in its modern form; and the the Frank Mentzer D&D Basic Rules Set (1983), which was the first book in the BECMI revision.

Basic D&D had sold incredibly well at first, back in the late 70s and early 80s. Thanks in large part to the extensive publicity that D&D received from the James Egbert affair, new players were flocking to try out the game, and most of them went to TSR’s introductory game – Basic D&D. That interest was in large part what led to the creation of the B/X and BECMI editions of the game, each of which expanded Basic D&D to allow for even more long-term play.

Unfortunately for Basic D&D, the pendulum began to swing toward AD&D as time went on. By the mid-80s, when popular books like Unearthed Arcana (1985) and Oriental Adventures (1985) were released, AD&D was clearly in ascendency, and Basic D&D was increasingly becoming the unwelcome relative who’d overstayed its welcome. The B-series (“Basic”) adventures largely ended in 1985. The rest of the BECMI coded adventures finished up in 1987; other than the production of two final introductory adventures, B11: “King’s Festival” (1989) and B12: “Queen’s Harvest” (1989) a few years later. The “GAZ” line of Known World setting books then stumbled to a halt in 1991, with just one book published in each of the last years.

Although there were some new efforts like the “DDA” adventures (1990-91) and the Hollow World Setting (1990-92), it was clear that Basic D&D’s flame was quickly fading.

A Black Box and a Hardcover Book. TSR tried to revive Basic D&D one last time in 1991 with a pair of new rules releases. The first was The New Easy to Master Dungeons & Dragons Game (1991), called alternatively the “Black Box edition,” the “fifth edition,” and “ten-seventy” (its product code, 1070) internally at TSR. It was a boxed D&D set that TSR described as “the first truly introductory version” of the game (as they had with every other “Basic” version of the game). The Black Box used cards to teach the game, something that had been advocated by Lorraine Williams based on the SRA reading programs (1957).

The Black Box is reported to have sold quickly and well. Approximately a half-million copies were purchased worldwide. It was also supplemented by a set of adventures that were almost boardgame-like with their colorful dungeon maps and figures. Unfortunately, the Black Box had one problem, the same problem that D&D “Basic” sets always had: it was limited in level, though it actually went up to 5th level, a bit higher than Basic’s 3rd-level standard.

This limitation dovetailed nicely into TSR’s other major plan for Basic D&D in 1991. Though the BECMI set of Basic D&D rules had always been well received, everyone thought it was quite troublesome to go through seven booklets totaling 368 pages when trying to track down a specific spell or magic item. Thus TSR decided to compile all of the rules into one hardcover book. The Rules Cyclopedia was the result – and it also offered somewhere for the Black Box players to go when they finished with fifth level.

Ironically, this was reportedly the exact same setup that Gygax had planned for the J. Eric Holmes Basic Set and also for AD&D, way back in 1977.

The Compilation. The Rules Cyclopedia is a compilation of the D&D Basic Rules Set (1983), the D&D Expert Rules Set (1983), the D&D Companion Rules (1984), and the D&D Master Rules (1985). It contains not only the rules from those boxed sets, but also the monsters, making the Cyclopedia one of two great sources for Basic D&D monsters, the other being the Creature Catalog (1986, 1993). Rules for skills and magic item creation from the “GAZ” Gazetteers (1987-91) are also included, making the Cyclopedia a truly massive compilation of about a decade’s worth of Basic D&D rules.

The Immortals Rules (1986) are notably not included in the Cyclopedia, although it does contain seven pages from the Master Rules that include basic information for immortals, including rules on PCs ascending to those lofty ranks.

Rules on jousting in tournaments and on artifacts were also left out of the Cyclopedia.

Not an Introductory Book! Unlike every other iteration of Basic D&D, this one was not intended to be an introductory roleplaying book. It was instead a reference for Basic D&D play, which matched TSR’s thinking about the AD&D 2e rules.

Expanding the Known World. The Cyclopedia doesn’t expand the Known World in any notable way, but it does include a rather impressive atlas, featuring 16 full color maps, including the maps from the Gazetteers and the world maps from the Master Rules and the Hollow World Campaign Set (1990).

Future History. The Black Box rules and the Rules Cyclopedia got some joint support in the form of the “Thunder Rift” series of low-level adventures (1992-93). The Rules Cyclopedia also was supplemented with a few boxed releases, the most notable of which was Wrath of the Immortals (1992), a new set of immortals rules.

However, after the Black Box was revised one more time as The Classic Dungeons & Dragons Game (1994), all support for the line ended. After 22 years (or 19 if you prefer), Basic D&D was finally dead.

About the Creators. Though lots of people worked on the Rules Cyclopedia, the two most notable creators are Frank Mentzer, who wrote all the original boxes, and Aaron Allston, who led the Cyclopedia project. Mentzer had left TSR for New Infinities back in 1986, which was likely why he wasn’t directly involved in this project. Allston didn’t work for TSR at all, but instead had been a freelance RPG writer since 1983. Though he only tended to write one or two books for TSR each year, by the early 90s he was writing the biggest releases for Basic D&D, including the Hollow World Campaign Setting, the D&D Rules Cyclopedia, and Wrath of the Immortals.

Author: J.R. Zambrano
Bell of Lost Souls Staff Writer and DM, J.R. covers RPGs of all stripes and on occasion eats sandwiches. You can ask him about either at [email protected]
Advertisement
Dungeons & Dragons Retro Games RPGs Tabletop News Wizards of the Coast
Advertisement