The Skaven are Skitterleaping their way into Shadespire with Spiteclaw’s Swarm – Here come the rat-men!

We’ve known the Skaven were heading to Shadespire for a while but today we’re getting our first real look at them. Say hellow to Spiteclaw’s Swarm: 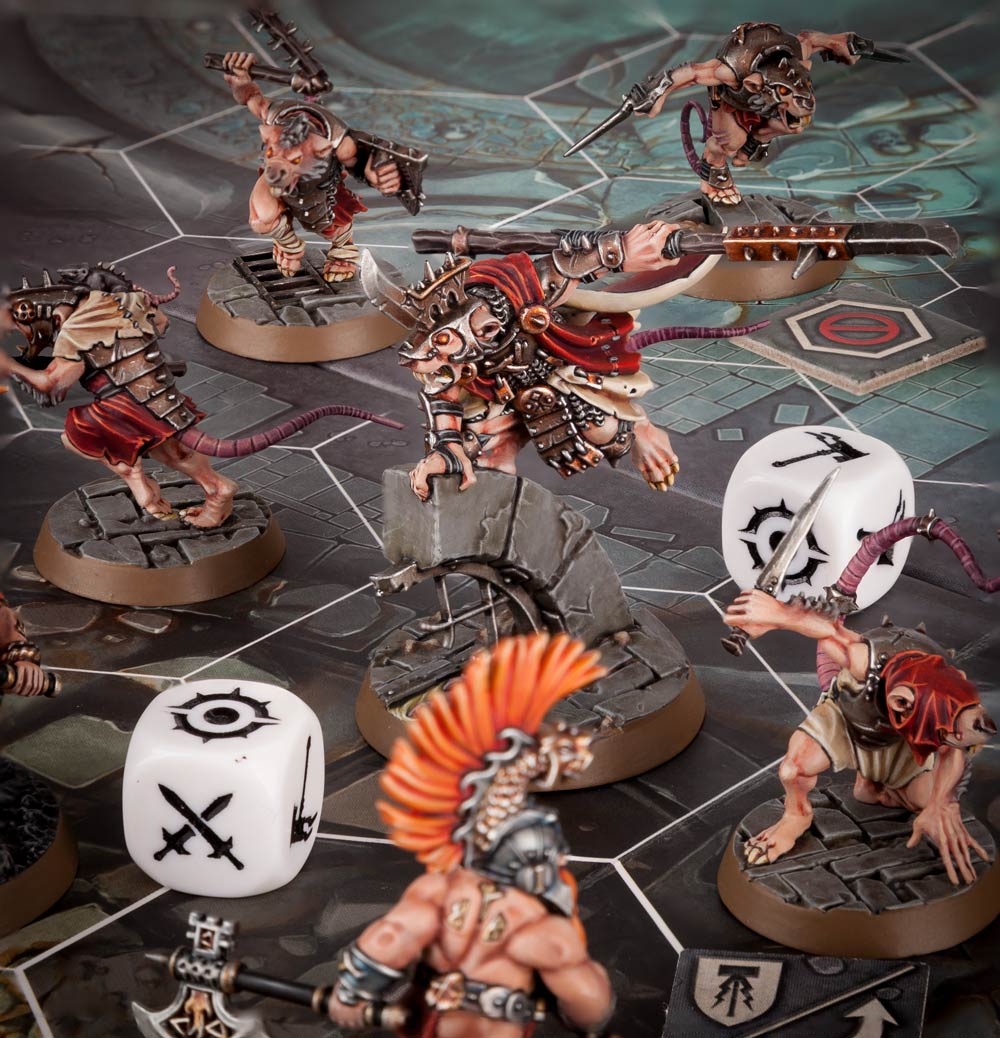 “Spiteclaw’s Swarm are, paws down, Warhammer Underworlds: Shadespire’s most devious warband. Where other adventurers in Shadespire might use brute strength or stalwart defence to accomplish their objectives, the skaven excel at scurrying around their foe before making deadly opportunistic strikes.”

The Ranks of the Rat-men 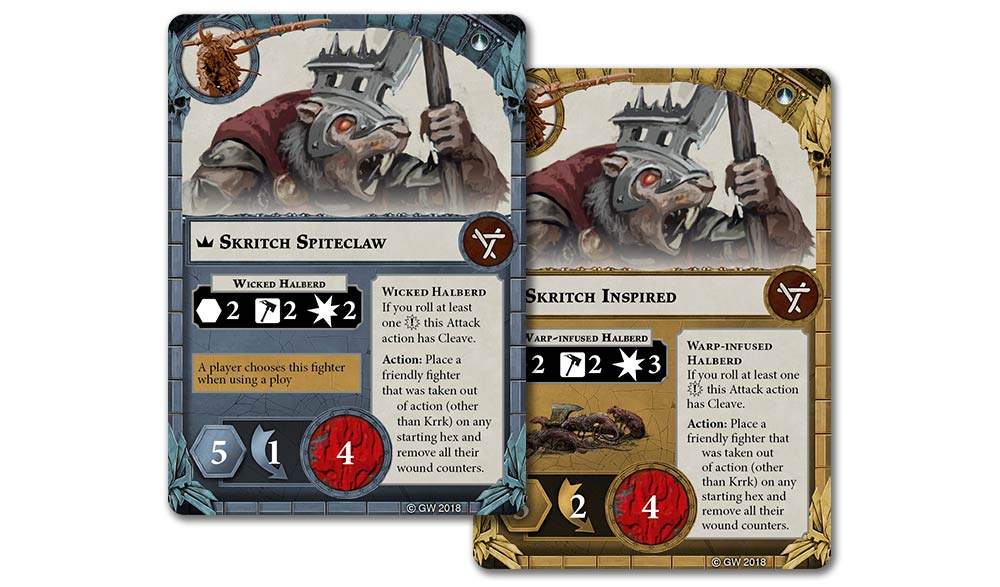 Skritch Spiteclaw is the leader of the warband and he’s got a couple of neat tricks. First off, the entire Warband has the same inspire condition. It should be too tough to get them to flip over based on how sneaky the Skaven are to start. Spiteclaw is also one of the fastest fighters in the game with a speed 5. He’s also got a pretty solid ranged attack that can randomly get a cleave as well. But what really makes him unique is his ability to bring back a knocked out fighter and stick them on a starting hex at full health (except Krrk). There are always more rats… 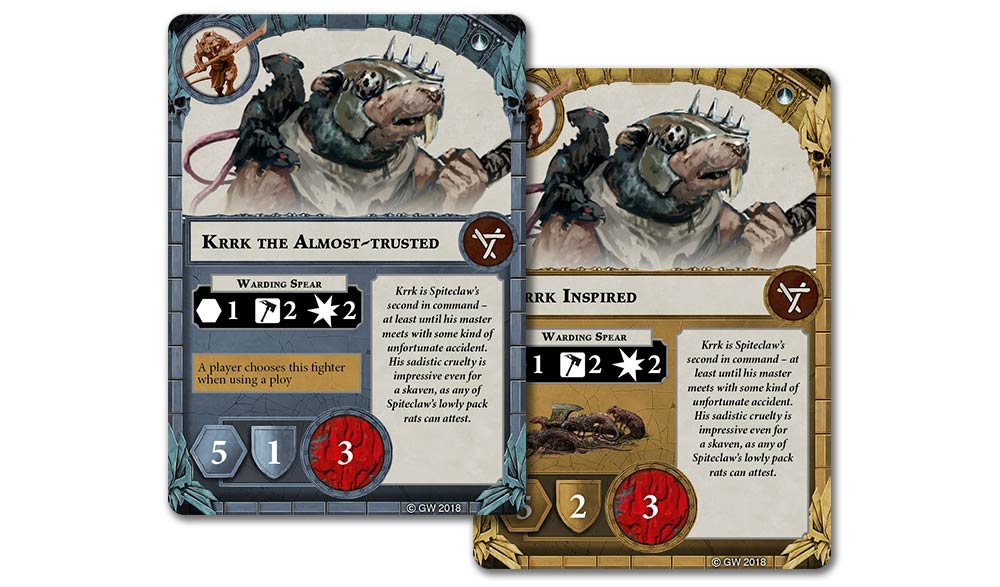 Krrk is quite possibly the toughest of the Skaven. When he becomes inspired, he gets 2 defense dice and retains his speed 5! GW also alluded to some of the upgrade cards for him that could make him as tough as a Stormcast to take out – that’s saying something! 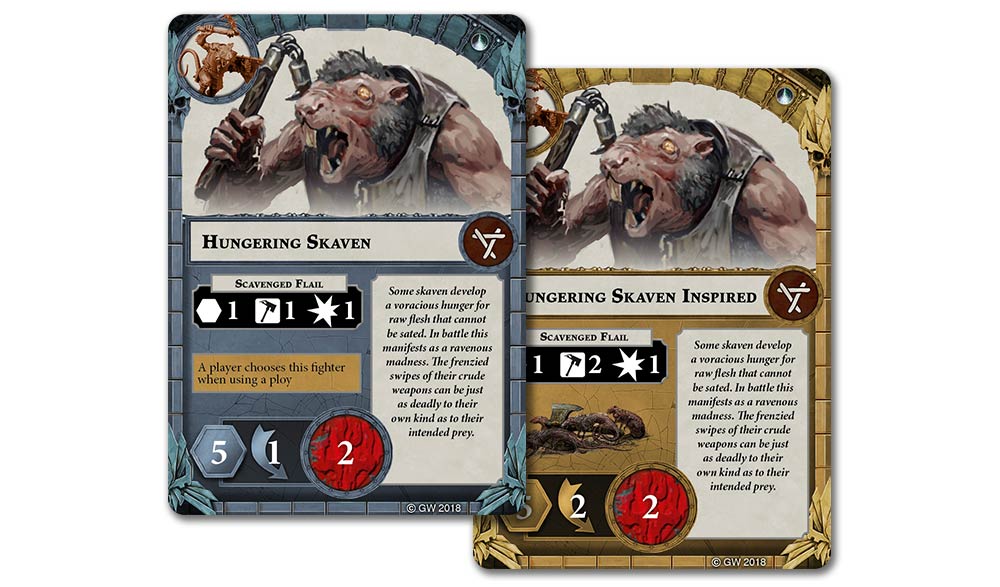 This skaven is hungry. So hungry he’s using “Nom-Chuks” – yes, it’s listed as a “Scavenged Flail” but we all know what it really is…Anyways, Spiteclaw’s ability should make more sense now because the next three skaven are nameless goons. The Hungering Skaven can be inspired to be more dodgy and can attack with two dice. It’s not super impressive but it’s great for snatching an objective or making a last ditch effort in stealing a kill. 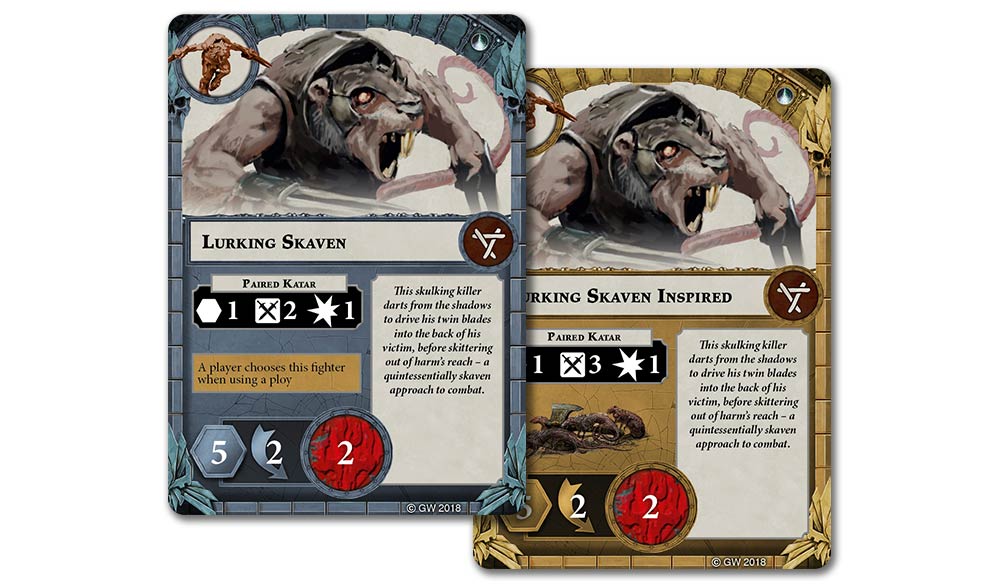 This Lurking Skaven is similar to his hungry brother above – another generic fighter, he’s a bit dodgier to start and when he gets inspired, he actually can hit things (it just doesn’t do a ton of damage). GW recommends using him for early objective grabs relying on his agility to carry him through danger. 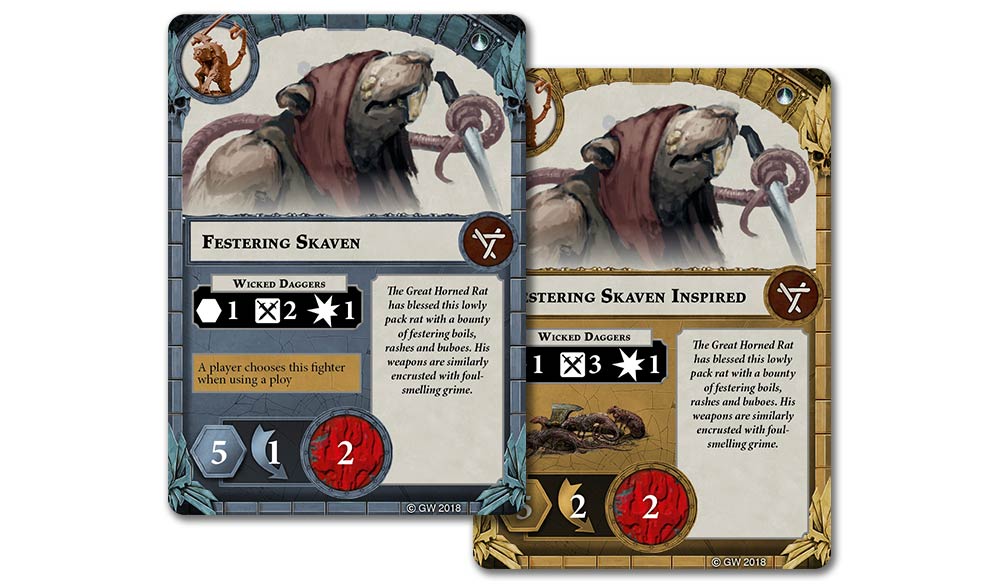 The Festering Skaven is sort of in the middle of the other two generic fighters. When he gets inspired his defense goes up as well as his attack – that puts him on par with the Lurking Skaven. If you can get him in to a place where he can lend a helping dagger to some of your harder hitters, he might be able to contribute that way instead of a more direct approach.

Spiteclaw’s Swarm is also pretty sneaky due to their inspire trigger – keep in mind that’s any time you or your opponent uses a ploy against them! That’s a defense unlike anyone else and may cause your opponent to think twice about trying to pull off a ploy.

One last thing to keep in mind is that they can come back on any starting hex – that’s a big deal as it could let you pop-up behind opponents or next to a hard to reach objective. Those pesky rats never truly die in Shadespire! 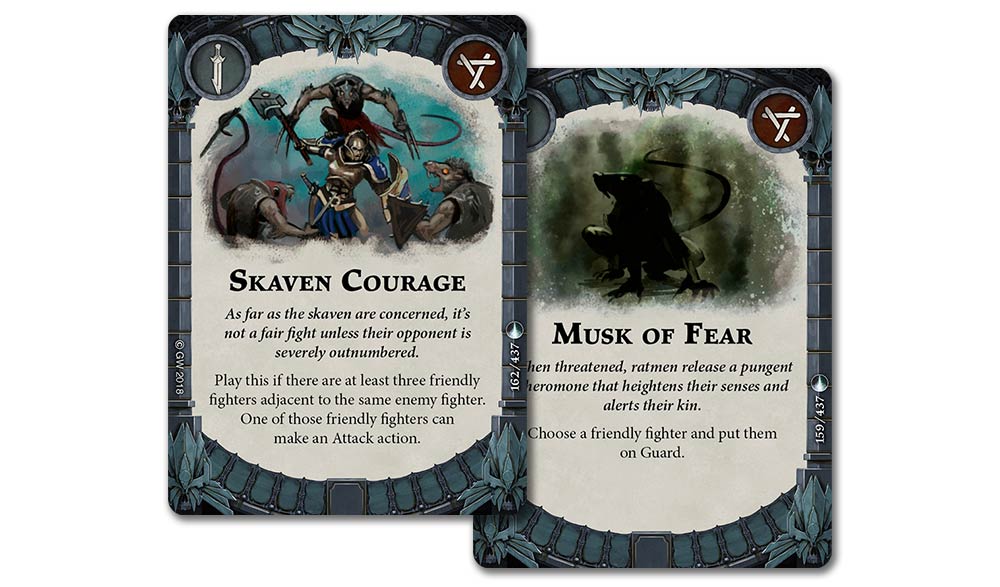 Speaking of ploys, the Skaven have quite a few dirty tricks. Skaven Courage absolutely fits them thematically. It’s a free swipe when you surround a foe with 3 adjacent fighters. Musk of Fear also allows you to get super defensive really quick. Being a ploy, it inspires the target and being a free guard action, they only fail on supported rolls. Combo that with some actual support and suddenly those fragile Skaven are tanking with the best of them! 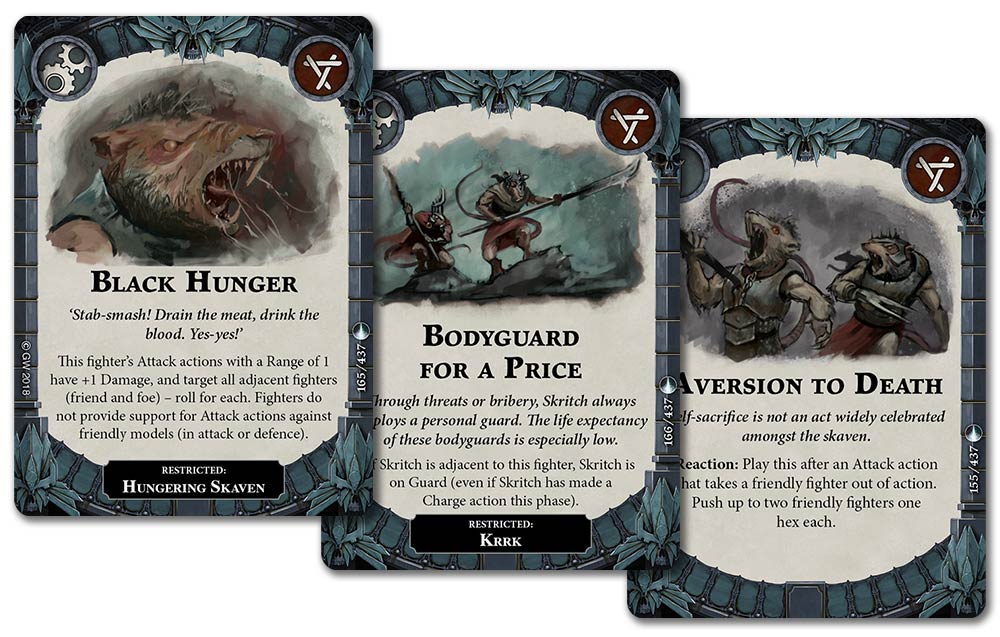 Black Hunger is a great upgrade for your Hungering Skaven it adds 1 damage and target all adjacent fighters! If you pair that with the right weapon you could end up with a very deadly (and very hungry) Skaven! Krrk has a fantastic upgrade that actually makes Skritch Spiteclaw even tougher to take-out. Running Krrk and Skritch close by will help them offer support to one another and it makes your leader go on Guard as well. Finally, Aversion to Death gives your Skaven some extra movement when a friendly fighter gets taken out. You can use that to move them on to objectives or surround foes – death is a great Skaven motivator after-all! 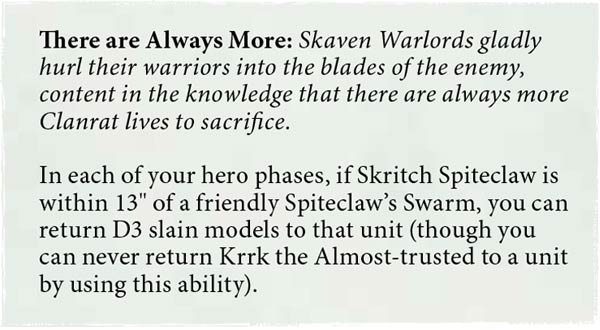 As a Skaven Warlord of Clan Verminus, Skritch has a lot of the same load-out and abilties as his fellows. However, he does have one extra trick to play with There are Always More. Bringing back D3 models a turn is going to be useful no matter how you slice it! 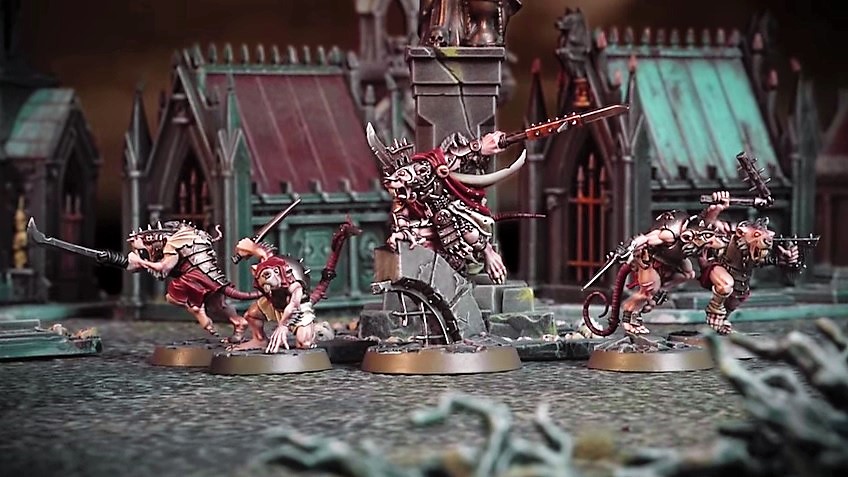 Are you ready for the Rat-men to invade Shadespire? They are up for pre-order on Saturday!