The Vampires Rise in Legions of Nagash 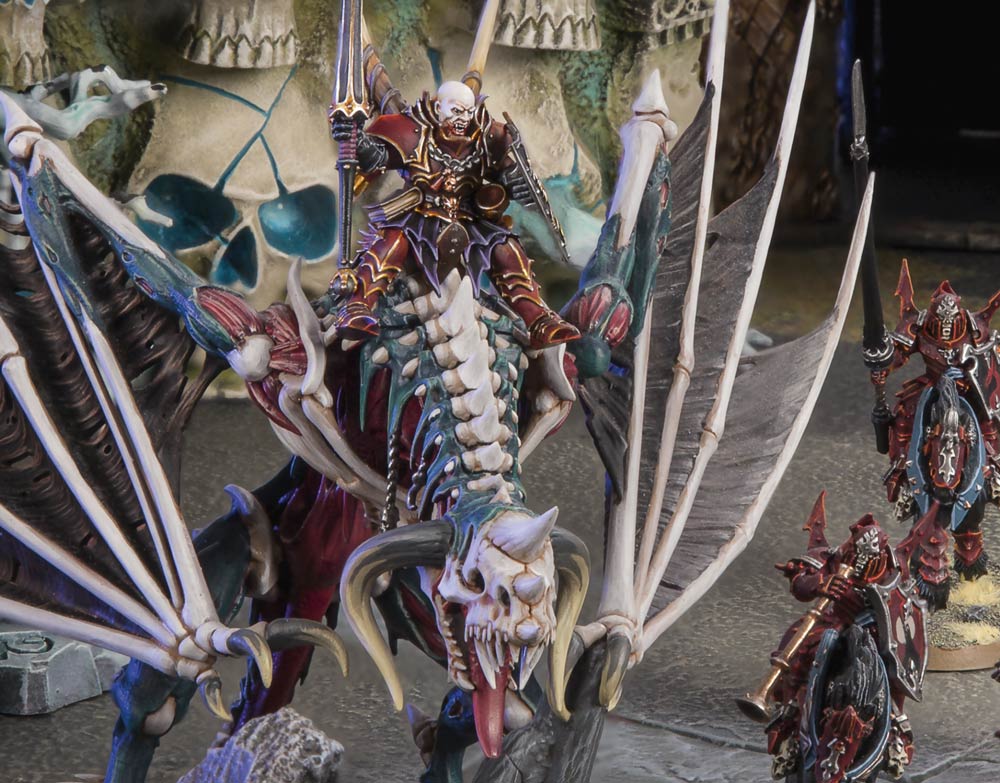 The Legion of Blood serves the Lord of Death and Games Workshop has a new preview of their powers & units!

We’ve gotten a tease of the skeletal horde and we’ve seen how the necromancers are going to sling-spells. Today, we’re getting a better look at the might Vampires of the Dead with the Legion of Blood!

“The Legion of Blood are Nagash’s spies and insurgents. Whole civilisations in the Mortal Realms have fallen to the Soulblight curse, but should they prove resistant from within, then Neferata, Mortarch of Blood and master of the Legion, has no qualms about crushing them in open battle.”

Favoured Retainers is the unique ability:

Vampires have long been known in previous editions for their marital prowess – those of the Legion of Blood have the benefit of an extra attack to their melee weapons to represent this. Those extra attacks will add up as the Vampires already hit harder than most. This boon will be very welcome by the forces of undeath!

Artefacts of the Dead

GW is also previewing two more artefacts that the Legions will have: The Amulet of Screams and the Ring of Dominion. 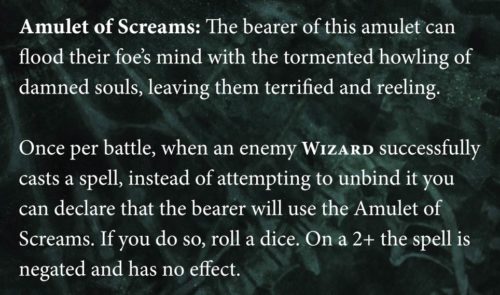 The Amulet of Screams will help your more martially inclined heroes deal with those pesky wizards. If you can manage to stop their spells and then kill them in close combat quickly, then this artefact is well worth it! 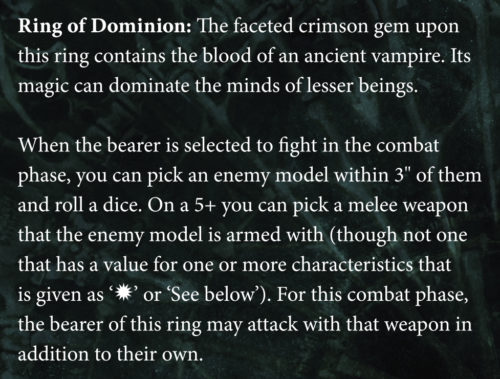 Those darn vampires always mesmerizing folks…The Ring of Dominion allows you to take control of an opponent’s melee weapon and force them to attack with it. Now that’s what’s going on thematically. Rules-wise, it’s just cleaner to allow you to get some extra swings with that weapon. Thankfully, this isn’t a once per game ability because that 5+ is really holding it back. But you’ll get to use it every time you select the bearer to fight…so it’s a bit of a trade off. 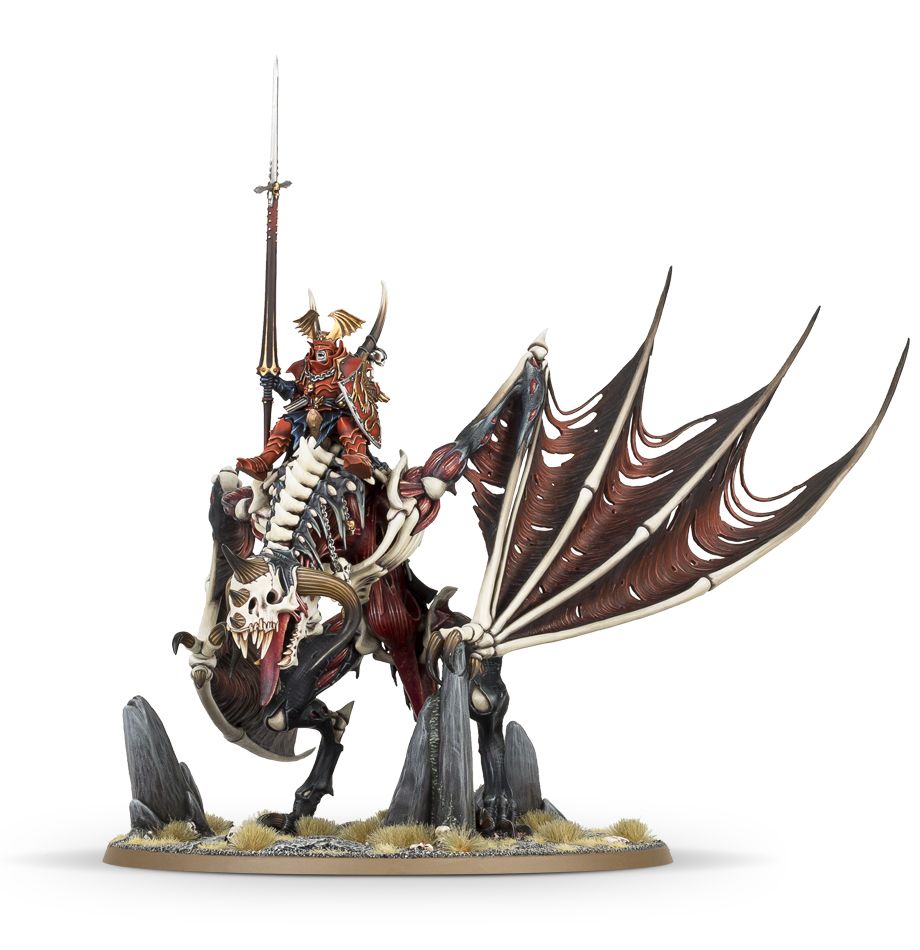 “Prince Vhordrai is Lord of the Crimson Keep, a spectral fortress that manifests in the realms upon Nagash’s command. To the Blood Knights, it is a home away from home that allows them to launch assaults on lands that think themselves safe from the wrath of Nagash, but to Vhordrai, it is a prison; his spirit is bound there in punishment for his attempts to assassinate the Grand Necromancer.”

The Vampire Prince works basically like a Vampire Lord on a Zombie Dragon but he’s got some extra tricks up his bloody sleeves. His Dragon Shordemaire has a pretty nasty breath weapon attack that can do up to 6 Mortal Wounds in one go! Plus he’s got the Fist of Nagash ability too:

The Legion of Blood is not known for it’s subtly – and Prince Vhordrai’s ability is pretty straight-forward. He might not buff your whole army, but granting your beat-stick vampires another round of combat is pretty great if you ask me!

If you want a smaller, more Elite army that still serves the Lord of Death, then the Legion of Blood is for you!

I hope you brought your garlic because these vampires are out for blood! 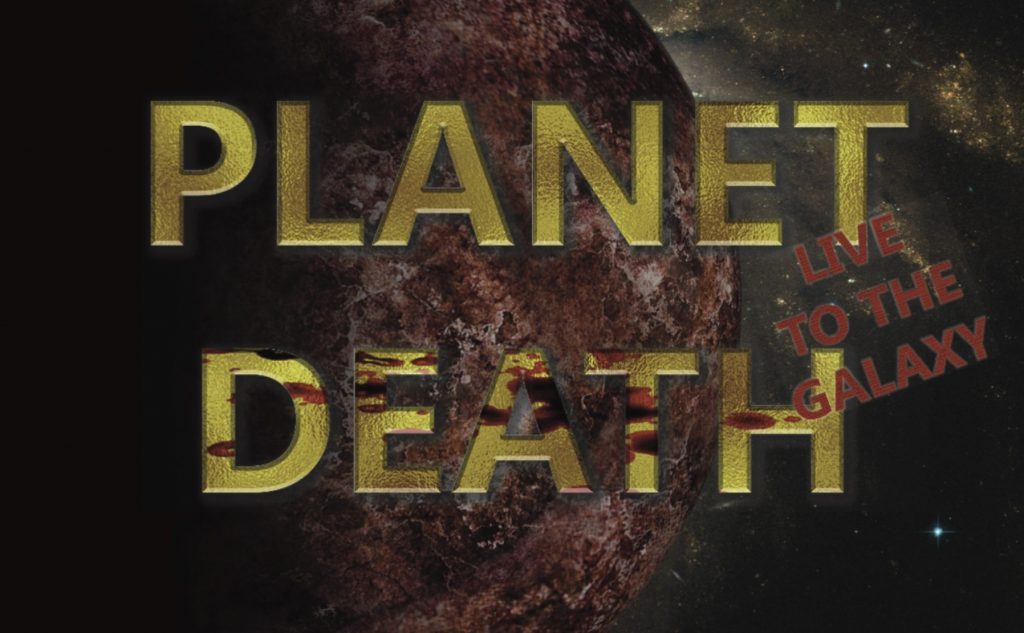