Nothing is What It Seems With the Latest ‘Aristeia!’ Expansion

It’s all Smoke and Mirrors when giant kawaii robot, a rockstar werewolf, an outdated inquisitor, and a mysterious Chinese illusionist all jump into the HexaDome. 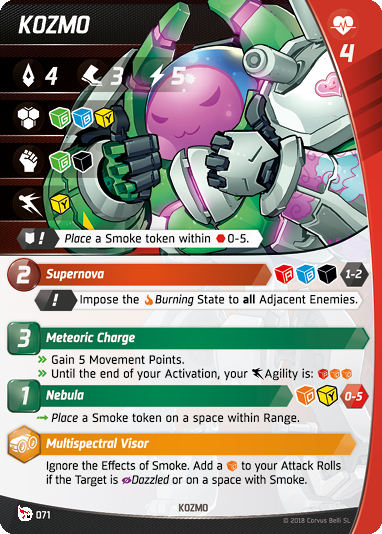 Nobody generates as much excitement when they enter the HexaDomes as Kozmo. A robot enveloped in smoke, with its bright jade armor covered in graffiti that looks like it came from the wall of a nursery.

Noriko Ayase is the extremely brilliant, recent University graduate pilot, and designer, of Kozmo, who combines the candid love of a Japanese school girl with the pragmatism of an engineer.

Kozmo is a Support-scorer that protects its Team by blocking Line of Sight with its Smoke–up until the moment is right for a timely Meteoric Charge giving it excellent surprise scorer potential. 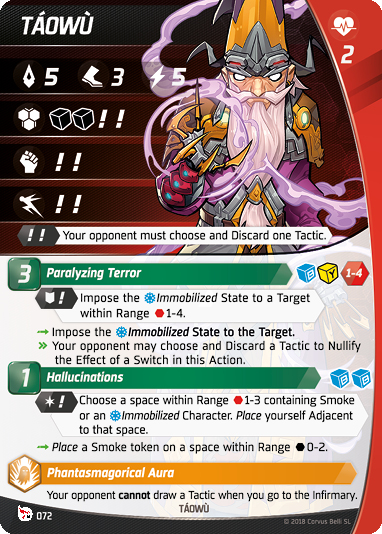 He is the knower of all plans, the surfer of quantum foam and of waves of probability. His life’s path has been meticulously and absolutely planned. He has never taken a false step or failed to take advantage of those around him who have. His knowledge of the intricacies of social behavior is so precise that he can unleash Armageddon with just a single word.

Táowù is a very aggressive Aristo Support controller who mainly works on the rival’s Tactics deck. To do so, he constantly threatens to impose the “Immobilized” State, which he does with ease. These powers help drain the rival’s Tactics deck towards the late-game to gain the upper hand. If you want to play some kind of Tempo game, Táowù is the way to go. 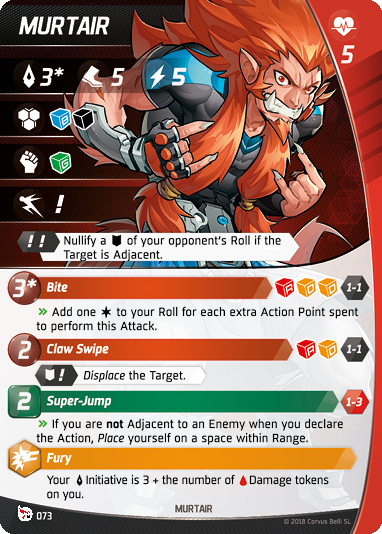 Duncan Brewster, aka Murtair, assassin in Gaelic, was a brilliant star in the Caledonia National Dog-Bowl League, the most brutal sport of Ariadna. Elevated to Aristeia!, Olympus of the Gods, thanks to his main sponsor, Aura Biochemicals, he now triumphs among the stars where none of his species has ever done so before.

Murtair is a close combat fighter who can use the Damage he has suffered for his own benefit. Therefore, he has a very offensive Profile. 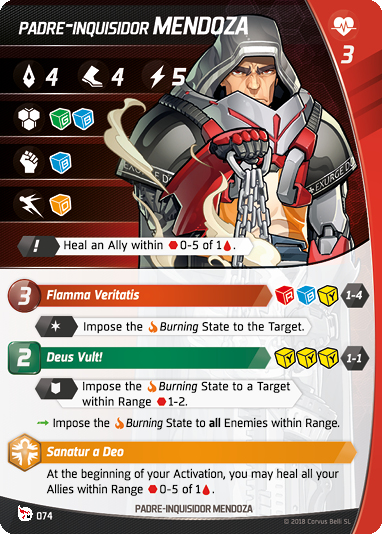 Juan Díaz Mendoza’s legend was forged on the most dangerous battlefields of Paradiso. There, where anyone else would have given up, his unwavering faith kept him strong.

The Automatic Skill “Sanatur a Deo” transforms him into an off-tank. He is a healer who cures his Allies (and himself) while hurting his enemies. The more active and the more in-the-midst of things he is, the more he heals. Plus imposes the Burning State, which is a nightmare for tanks.

Targets affected by the Burning State receive a random amount of Damage and Smoke affects the visibility of the Spaces by blocking Line of Sight without preventing movement. 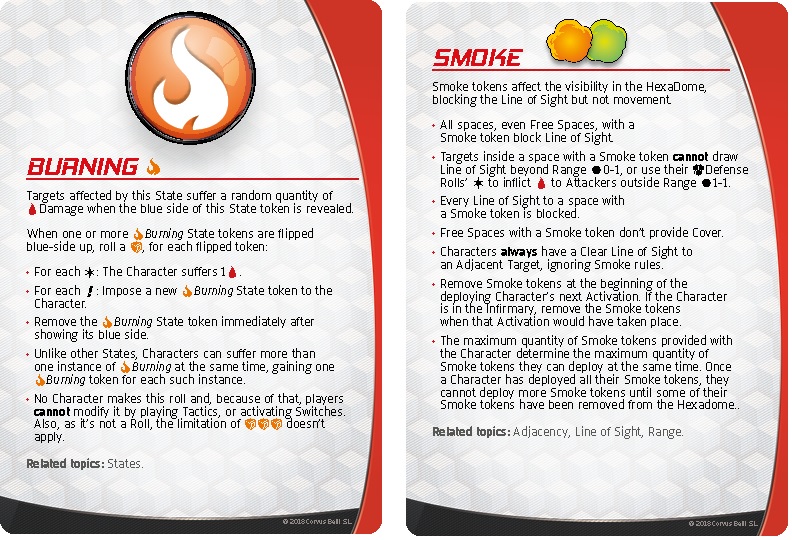 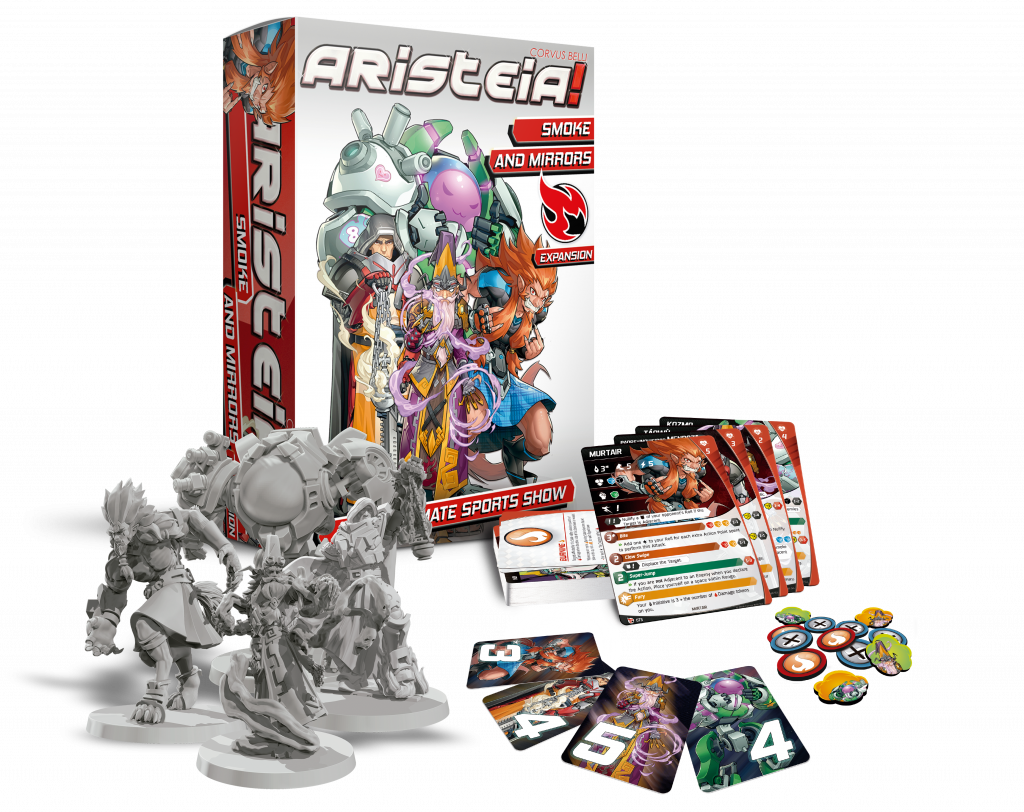 Are you wondering what a giant kawai robot, a rockstar werewolf, an outdated inquisitor, and a mysterious Chinese illusionist have in common? Alberto Abal, one of the designers of Aristeia!, will tell you that “All of these Aristos allow us to bring EXCITEMENT, in capital letters, to the HexaDomes of the Human Sphere. Thus, Aristeia! shines like a supernova again. The excitement is at your fingertips!”.

Corvus Belli will present a new expansion pack for its MOBA-style board game this summer: Aristeia! Smoke & Mirrors (SnM). This expansion has four new characters, or aristos, each of them incorporating a new way to play and spectacular and amazing abilities to increase the replayability and versatility of the game.

The Smoke & Mirrors (SnM) expansion pack is going to change the perception of the game, making it more entertaining than ever before! A Padre-Inquisidor willing to burn heretics, an Asian sorcerer who tortures his enemies with their worst nightmares, a bloodthirsty half-breed Wulver, and a robot that throws smoke grenades comprise the incredible characters who will mesmerize the audience. Nothing is what it seems in Aristeia!

Step into greatness, and remember, when in doubt, gank mid. Look I don’t care that this game doesn’t have a mid to gank, get in there and GANK MID.