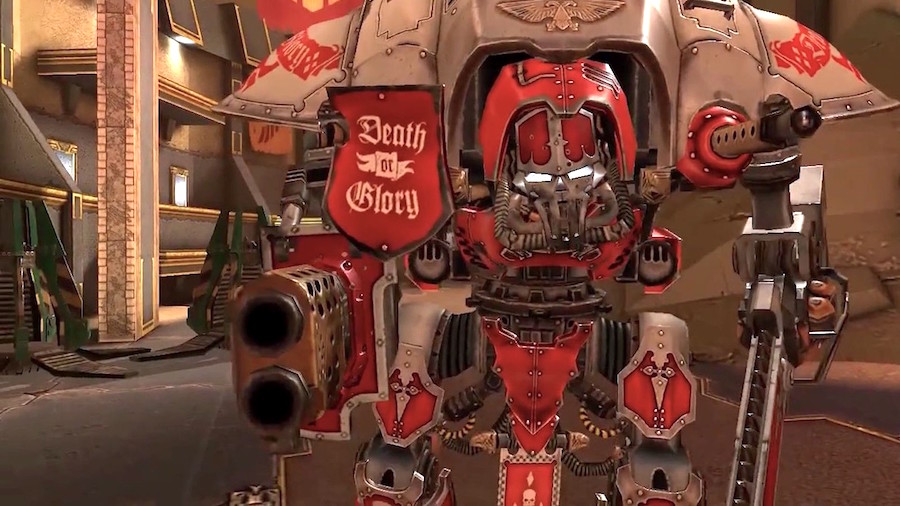 From the noble to murderous, the loyal to the insane, today we look at some of the famed Freeblades to stride across the Imperium. 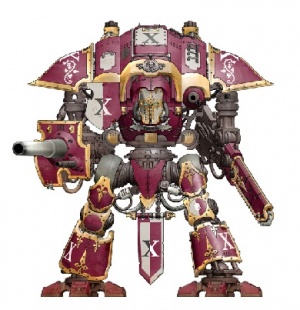 As most Freeblades maintain no house markings, and few show any sign of Imperial or Adeptus Mechanicus alignment, it can be difficult to ascertain their past. The lone Freeblade known as Amaranthine earned his name from the beleaguered Imperial defenders of Romaric VII. Most believe the name is a reference to the Knight’s distinctive purple-red hull, but others claim it honours an Imperial saint. Silent and purposeful, the Knight never responds to the name Amaranthine, or to any hails, vox transmissions or other efforts to contact him. However, during the Tiberius Wars it was observed that the Knight heeded the voxed tactics of those he fought alongside, avoiding firing lines and vanquishing foes as per incoming requests. It led the defenders to believe that though he did not speak, he was always listening. Only invitations to stay once the battle was won seemed to go unheard. 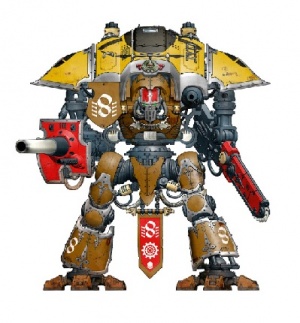 With blade and battle cannon, the Knight known as Auric Arachnus wades into battle against the Imperium’s foes. With its distinctive bright yellow livery and contrasting stylized arachnid symbol, the bold Freeblade is designed to draw attention and the enemy’s fire. From whence the Knight came there is no clue, nor does its pilot ever emerge. When the shadow of Hive Fleet Behemoth fell across the Ultima Segmentum, however, the legend of Auric Arachnus began. As Imperial armies rallied to repel the foe, the Knight Paladin was a tower of firepower, and when eventually overrun, its reaper blade scythed down swarms of foes. As the Tyranids pressed in upon the Ultramarines, the Chapter was forced back to its home world and Auric Arachnus traveled with them. There, the Freeblade earned great renown by slaying a Dominatrix. 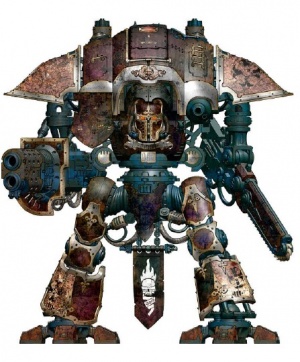 The Freeblade known as the Scorched Knight was as much a product of the Red Waaagh! as he was a combatant within it. Having rejected his family only scant months before the arrival of Grukk and his Ork hordes, Dyros was still finding his way within a world become strange to him. When he had learnt of his older brother’s murder at the hands of his father he had cast off his family obligations. Overnight he rejected the caste systems of Alaric, taking his Knight and striking out on his own. Scorching off the symbols of House Kamata in the Damatoi volcano range, Dyros struck out into the hinterlands of the world, determined to right the wrong committed against his brother by their father, Hyram Kamata. The Red Waaagh! gave him all the opportunity he could ask for. In the chaos of the invasion he returned to the shadow of Sacred Mountain to see the blood debt paid.

A skilled and able warrior, Dyros was instrumental in disrupting the Ork forces around the mountain and accounted for hundreds of greenskin kills. He chose not to fight alongside the other Nobles, instead striking against rearward units or Ork artillery. His lone Knight would often be seen by Cadian Guardsmen, its burnt hull obscured by smoke and flame as it smashed Ork wagons to scrap or tore though massed ranks of greenskins with its reaper chainsword. In the space of a few cycles the legend of the Scorched Knight had sprung up among the Imperial forces. Guardsmen and commanders cut off or abandoned to the tides of war would pray for his appearance, their eyes scanning the horizon for the distinctive hunched form. Unknown to the Cadians, Dyros did not fight for them. He fought to keep his world free, to purge the alien and maintain his honour; but mostly he fought for revenge.

Dyros was to get his chance for vengeance during the last battle for Sacred Mountain. In the chaos of the melee, Hyram’s own Knight was toppled by a crashing Dakkajet. Dyros, who had been fighting in the vanguard of the Imperial forces, saw his father fall and hastened to his side. When Hyram looked up to see which Knight had come to his aid his gaze fell upon the armour of Dyros. One look at its scorched insignia and, even through his insanity, the patriarch knew his time had come. Leveling his thermal cannon at his father’s canopy, Dyros let the rage and hatred of his brother wash over him. A final mental pulse ended the crimes of his father once and for all.

Though dozens of other Nobles had seen Dyros decapitate his father’s Knight, none barred his way when he finally strode from the field of battle, for each and every Noble respects the right to settle debts within his own house.

Dyros and his Knight were destroyed on Alaric Prime by the Ork bombardment – event that caused uncontrollable anger of Ragnar Blackmane who headed the desperate attack on orks army which eventually lead to destroying the mighty flying ork’s fortress Skygouger. So even the death of Dyros and the Scorched Knight was triumphant. 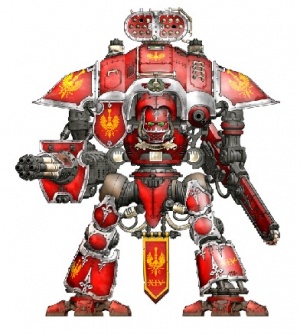 Trusting in its superlative ion shield, the Knight Warden known as Impervious Rex strides straight into the thick of the enemy’s firepower. With shells flashing and ricocheting in all directions, the bright red Freeblade lifts high both weapons, clashing them together in ritual salute. Whatever knightly house this battle ceremony came from, they are forgotten now – only Impervious Rex remains to continue the tradition. In its wake, the Knight has left many to speculate the mysterious Freeblade’s origins. The red livery and numerals perhaps associate Impervious Rex with a Mechanicus-aligned house, but if there is a connection, neither the Freeblade nor any member of the Adeptus Mechanicus ever makes mention. All that is known is that, with its sweeping gatling cannon fire and the relentless fury with which the Freeblade swings its reaper, Impervious Rex ensures no enemies escape alive. 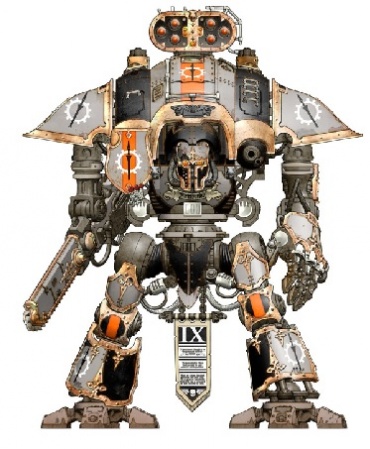 This Freeblade long fought for the Imperium. But something has gone wrong with this Knight Gallant that is known as the Living Litany. All vox hails received in answer only a droning sermon in High Gothic. The words were garbled, unfamiliar even to those that know that archaic language. On and on the phrases were murmured, almost as if the voice were struggling to master human speech. The little that can be understood beseeches the Emperor, while damning the woes of the universe. Only when the Knight, whose markings reveal little about its past, reached close combat does the voice change – rising in tone and inflection until it bellows its verses like a war cry. The forces of the Imperium might not tolerate such obvious madness, yet for a long time there was nothing amiss with the Freeblade’s combat prowess. The Knight Gallant was a whirling, stomping force of purest destruction, chanting its hate with every swing of its mighty weapons.

It is known that at some moment this Knight at last betrayed Humanity and became the Renegade Knight. Since that time he was renamed as Litany of Destruction and leaved behind himself a trail of destruction and terror. 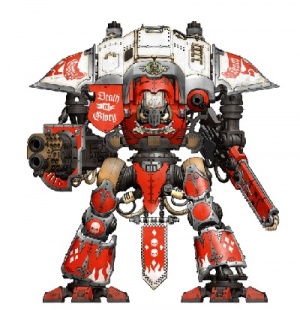 The Knight Errant known as Retribution Incarnate has aided the Imperium in battle since the days of the Macharian Crusade. Although the pilot is rumored to be the last of House Reinharn’s Nobles, the Knight bears no trace of that house’s livery or heraldry. Only the markings of a Freeblade remain, with the vow ‘Death or Glory’ prominently displayed upon its armour. And thus far, Retribution Incarnate has reaped much glory. Since the Knight was first pict-captured on the planet Synn Secundus, the red colossus has appeared in six different war zones, always allying itself to Imperial forces. Retribution Incarnate seems especially drawn to campaigns against traitor forces, battles in which he exacts a bloody toll. The Knight stamps over cultists, hunting down Chaos Space Marines, especially those of the Alpha Legion, for whom Retribution Incarnate’s wrath can never be sated. 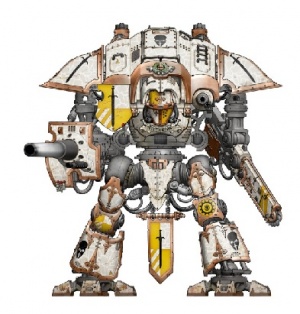 Once, the Noble Neru Degallio was the ruler of House Degallio. His Knight, the White Warden, was a symbol of the power and influence of his extended family. All of that was lost when the Red Waaagh! descended upon his planet. As the most powerful knightly house on Alaric Prime, it fell to Degallio to weather the brunt of the fighting, and of all the house’s Knights and Nobles, Neru alone survived the fierce fighting. In the wake of this Pyrrhic victory, the lord of House Degallio found himself made a scapegoat by lesser houses seeking political gains. After the mysterious disappearance of his consort, Neru turned Freeblade, taking the name of his Knight and leaving Alaric Prime far behind. Since that time, the White Warden has fought countless enemies of the Imperium, each time proving himself a lethal warrior and a canny tactician.

Learn of MANY More Freeblades

~Thinking of adding a Freeblade to your army; who’s your favorite?

Author: Larry Vela
Dad, Gamer, Publisher, Pilot, Texan. All games all the time since junior-high. I started BoLS Interactive in 2006. I’m a lifelong tabletop & RPG gaming enthusiast, and internet publisher working to entertain and inform my readers every day. I've been playing RPGs and Tabletop Games since the 1970s. I'm been playing and covering Warhammer and Warhammer 40K for over 35 years.
Advertisement
Imperial Knights Lexicanum Lore Warhammer 40k
Advertisement 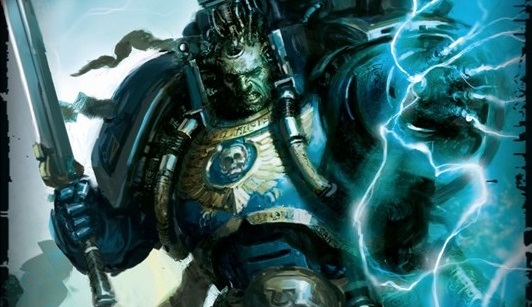