That’s right folks. A new Lieutenant character for the Ultramarines, and Primaris by the look of him too. These images brought to you courtesy of the folks over at CruxTerminatusMinis, who initially spotted the image on the back of one of the trial run issues of Warhammer Conquest.

Let’s take a look at this fellow up close and personal. 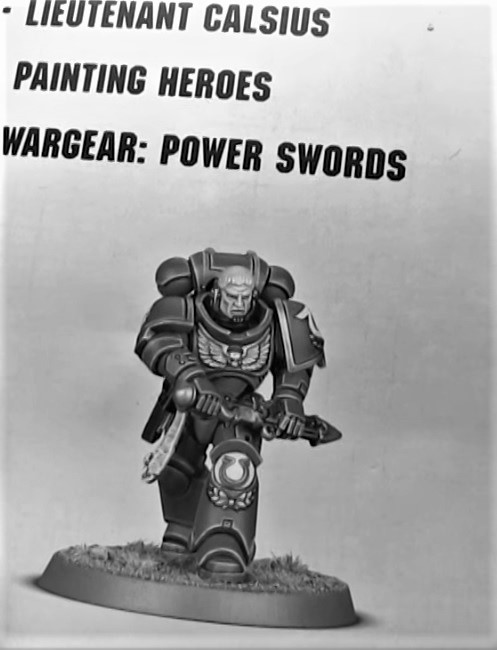 Definitely an Ultramarine–even his sword has that iconography of the Chapter baked in. Looks like there’s a pistol at his hip, but other than that, no other weaponry is visible. It’s a real cool looking miniature. Don’t know if he’ll be a named special character, or just an alternate lieutenant model.

Warhammer Conquest is a combination lore/modelling/battle magazine from GW. Basically a subscription service packaged with a magazine, mostly focused on Primaris vs. Deathguard–but each month would feature a 4-issue pack with models, paints, etc. — all the things you need to get started in the hobby.

Although it currently is on hiatus after a 4-issue trial run. Which is what makes the information in that video so interesting. That’s definitely the last one for now–but it does mean that GW definitely has a plan for what’s next. Does this mean we’re not through with Primaris releases? Lieutenant Calsius seems to suggest not. Who knows what else we might see released through Warhammer Conquest, once it resumes.

For now though, we’ll have to wait and see where Lieutenant Calsius ends up. Will he have official rules and points in a Chapter Approved? Will there just be datasheets online? Only one way to find out.

What do you think of this new lieutenant?

40K: Buffing the Bad Guys for the Greater Good